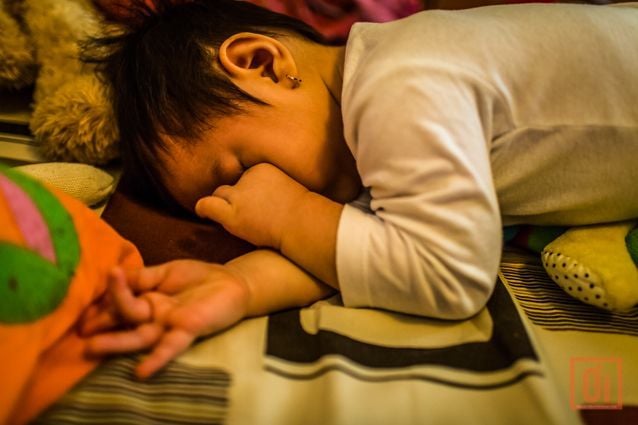 A Wake Up Call

If there’s anything that’s a universal heart-warmer, it’s the sight of a sleeping kid snuggled up warmly beneath the blankets. No grumpy parent can resist that completely relaxed and totally intent expression of their own child absorbed in sleep; the only thing capable of making us forget the total chaos they’re capable of when they’re awake.

Of course, it’s supposed to be the parent’s task to get them into that state in the first place and to wake them up again at the appropriate time – something that takes far more skill than you might think. My daughter, quite infuriatingly, just doesn’t enjoy sleep at all – far too interested in every ambient noise and the shifting lights on the ceiling from passing bikes outside, she requires a great deal of cajoling – bordering on pleading – just to get her to keep her head flat on the pillow. As soon as the gathering morning glow touches the curtains, she’s up again, just in time to remind me to feel guilty for heading off to work.

Of course, not every kid’s like mine, but it does lead me to wonder – do the Vietnamese deal with this problem any better than I do? Are Vietnamese methods traditionally tender or something more brutal?

Single mother Minh Anh has long since given up on proper bedtimes for her young son who, despite having a bedroom with most things a kid should want, insists on sharing a bed with his mom. “Minh Viet’s a late sleeper,” she says. “He’ll watch TV until the broadcasting finishes at around 11 and there’s nothing left to see. I usually have to work late on my laptop anyway, and inevitably I’ll turn around to find he’s simply switched off.”

The late bedtimes are a problem for a kid whose international school classes start at 7.30am, but Minh Anh doesn’t have to face this struggle alone. “His father calls him every morning at 6.30am. I hold my phone to his ear so that he can hear his Dad’s voice. He likes that, but it doesn’t get him out of bed – I usually turn on Cartoon Network and slowly raise the volume until his natural curiosity to watch what’s happening takes over.”

“The one thing that always gets him up is if I tell him he’s going to make me late. He just loves me enough not to want to cause me any trouble. He gets to school on time.”

“I was breastfeeding until she was 18 months old,” she says. “At the time, she kept waking up at night, and I thought I had to feed her so she could get back to sleep. The situation got worse and worse – we were both very tired, and neither of us slept well.”

After two months in New Zealand, however, Amy encountered a nurse who advised her to stop feeding her daughter at night. “She cried for three nights consecutively, and I wasn’t allowed to touch her or say anything to her. I just let her cry until she got too tired and went back to sleep. However, it worked perfectly after the third night; she cried less and stopped completely on the fourth.”

“Now she sleeps very deeply through the night. I’m so grateful to that nurse – most of the Vietnamese advice I received was focused on her need to eat rather than sleep,” Amy adds. “Vietnamese people seem to nurture their kids too much. We’re not strong enough to teach babies to be independent. We’re too scared to hear babies crying and compromise too easily. Westerners are much stronger in their training attitudes. They gave me clear, confident instructions – exactly what new mums need.”

Local restaurateur and expat father Scott Marquis made similar moves in training his daughter to do without a night feed despite local attitudes, but then he’s got it easy: “Zoey is a great sleeper, and has been since she was born.” That being said, Zoey’s situation is a little different from most kids, in that with both parents working nights, she tends to sleep their hours too.

Regular napping keeps Zoey fresh. “On a normal day she naps twice, from around 12pm-1pm till she wakes up, and then again in the early evening before she comes to visit us at the restaurant. We try to put her down between 10pm-11pm, but it doesn’t always work” he laughs. Wake-up times are similarly effortless: “We just let her sleep until she wakes up. If we have to take her out before she’s awake, it’s no problem. She just gets a little cranky because we didn’t lie around in bed and play with her for awhile.”

What surprises Scott most is that Zoey’s Vietnamese grandmother seems to take their Western approach in stride. Zoey doesn’t co-sleep with her parents, unlike most Vietnamese children, and sleeps in fully air-conditioned rooms – habits that expats often report cause heated debates with their Vietnamese in-laws, who are concerned that Western child rearing techniques buck time-tested traditions.

“Duc’s mom has been really good about doing things our way when we’re around. She follows our ‘no sweet milk or sugar’ rule, and we let her put a hat on Zoey no matter how hot it is when she takes her outside,” explains Scott. “It might be that Zoey is so smart, alert, happy, and active that Grandma just doesn’t question us about everything.”

2 thoughts on “A Wake Up Call”