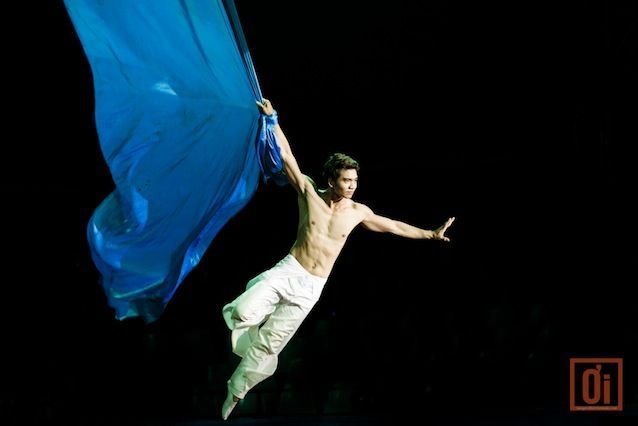 Few things are synonymous with pure, unadulterated glee like the circus. For many, memorable ‘first time’ childhood experiences include airplane and carousel rides, losing a tooth, the first day of school… and a trip to what’s been dubbed “the greatest show on earth”. There’s something magical that comes from seeing the stuff of childhood imagination turning into real life right before your unbelieving eyes in the form of monstrous elephants, fiery illusions and superhuman acrobatics, all set to a backdrop of explosive color and sound.

Entertaining kids and kids-at-heart since 1986, the Ho Chi Minh City Circus has recently found a new home within the grounds of Gia Dinh Park in Phu Nhuan after more than 10 years of being a familiar fixture in the September 23 Park in D1. Some of the performers of the Blue Sky troupe sat down with Oi during one of their practice sessions for their summer production of Tarzan. 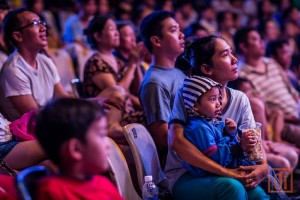 With a background in music composition and more than 300 film and stage scores to his name, Ho Van Thanh is the Director and Composer for the Ho Chi Minh City Circus. Having had many posts with the Ministry of Culture, Sports and Tourism, including being the teaching principal for the Opera House, Thanh has now been with the circus for 10 years. Oi spoke to him just before he left for a performance in Kazakhstan, one of many international engagements the troupe has had over the years.

“We might not be the best technically, but we bring a fresh, positive, optimistic outlook. Other countries’ troupes have high technical ability, but they look sad performing. Even in hard times, we’re always cheerful with our special acts of bravery,” he says.

There are about 75 performers, divided up into two troupes performing entirely different programs. Oftentimes, one troupe travels while the other performs locally. In the decade he’s been involved, the city’s performers have won medals in international competitions all over the world, including China, Cuba, Japan and Taiwan.

“We get invited every year to perform in France. And they’re not free shows. People buy tickets to watch us perform,” he explains proudly. “We may not be the best and sometimes we make mistakes but that shows that we’re humans and not soulless robots. We carefully tread the line between what’s humanly possible and what’s not. We reflect the human condition.” 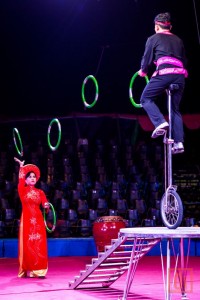 Eyes locked on a spot where seven bowling pins successively come into view as they are tossed between him and his partner, Duc, 24, is a study in intensity. Hailing from Thanh Hoa, 150km south of Hanoi, Duc has mastered the art of juggling pins, balls and hoops. Introduced to the circus by a performing cousin, Duc graduated from a five year program at the circus school in Hanoi, spending 2.5 hours a day juggling, doing acrobatics, feats of balance and gymnastics, followed by dance, culture and politics in the afternoon.

For Duc, life is quite literally a balancing act. “I’m working on learning tight rope walking. Right now, I’m only at two meters. It’s scary and frustrating but I’m always trying to hone my craft, add a new act and be able to show off my full range of skills.” To that end, he spends his days practicing, returning to the group home at night, which houses 20-30 young single performers, with separate quarters for men and women.

In a profession where only a few, like illusionists and clowns, can work into their 40s, Duc knows that acrobats like him have a relatively short career, most likely only into their 30s. “Circus life is hard. I’ve fractured a bone in my elbow and I’ve had an ankle sprain. But I love the circus life. I’ve been to France and Taiwan and I know that without the circus I’d probably have no chance to go abroad. This is my passion. I earn my own living and take care of my own needs. I haven’t thought much about life afterwards.”

Born in Hue into a family with nine brothers and sisters, Kiem’s father walked out when she was five. Her mother packed her up with one of her siblings and headed to HCMC in search of a better life. “I was what you would call a disadvantaged child,” she recalls. “One day, when I was about 11 or 12, the government had a campaign to round up all the homeless people and I got sent to a special school for vulnerable youths. There, I learned circus skills. My teacher chose the bicycle for me. Later I learned how to ride my unicycle up steps. I remember not being afraid because I was so young. I definitely wasn’t a lucky child but I tried hard and did everything with enthusiasm. I poured my blood, sweat and tears into it. Now my best trick is flipping seven bowls onto my head while riding a unicycle.”

Kiem is now happily married to a security guard at the circus and has two children, aged three and 12, who regularly come to see her perform. “The 12-year-old doesn’t really want to do what I do. But my three-year-old sees the tricks that I do and goes home and tries to copy me.”

Kiem knows that she can’t go on performing forever. “When I retire from the circus, I want to teach my skills to kids in orphanage schools. I owe everything to the circus. I can’t imagine sitting in an office somewhere. My hands and feet always need to be moving.” 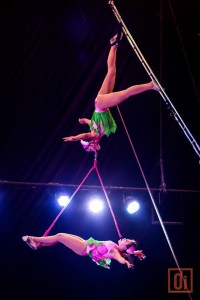 Playing the lead role in the circus’ summer production of Tarzan, Thang, 23, is working feverishly to add even more difficult tricks to his already highly physical aerial moves. Literally following through on every kid’s dream to run away to the circus, Thang, who hails from Ninh Binh, remembers being entranced by the circus as a child. “The circus came to our town and I was in love with seeing the people and animals. So when they came again for a summer recruitment program when I was 13, I went for it. At the tryouts, they looked at our bodies and hands to make sure we were strong and watched us walking to see how we moved.”

From there, it was off to Hanoi for two months of initial training. “More than 100 kids signed up. It was soon whittled down to 45. Staying in the dorms, I missed my family, but not too much. We woke up early to practice the splits and other flexibility skills, tumbling and headstands. At first, it was really painful. I was always sore. I cried and thought about quitting. But I made lots of friends and soon realized this was every boy’s dream.  When I started performing, my parents didn’t like it at first. They thought it was dangerous. But now they like watching me perform.”

After five years at the circus school, Thang decided to leave his three-person act and strike out on his own in Saigon. He honed his aerial skills, performing strength moves while suspended high in the air with nothing but two strands of silk.

“The feeling of flying is simply indescribable. No nets, no spotters. Just holding on for dear life,” he says.

The recent production of Tarzan had Thang flying high above the audience, whisking Jane away to the treetops along with a handful of other simian acrobats on bungee cords.

“Before the circus, I had never performed in front of people before. I was really shy, but thanks to the circus I have self confidence,” Thang adds.

His motivation for choosing this nomadic, short-lived career? “I love traveling. We’ve been up and down the country and I’ve been to Taiwan, France and Switzerland. But in the end, it’s all about performing in front of people. I actually see individual faces in the crowd while I’m on stage. I see happy smiling faces.” 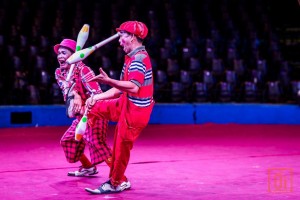 Making kids laugh is a tough job. Initially an aerialist, Hiep, 36, moved into clowning later in his career. “It’s less stressful on the body,” he says. “But you still have to give it your all. Some days you might not be feeling it, but you have to forget everything outside of the performance and put on your best face for the kids.”

Hiep’s life has revolved around the circus, starting in circus school in 1996. He also found love through his profession, meeting his wife, an illusionist, at a performance in District 4. “It’s easier being able to relate to each other’s work. We just had baby. If my son wants to be circus folk, I wouldn’t stop him. It’s been a good life. I couldn’t imagine any other.” 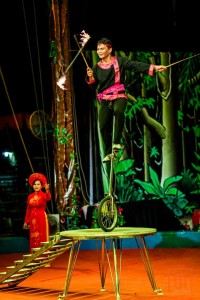