In the hands of a team of skilled surgeons, rare and antique books get a new life.

In the heart of Ho Chi Minh City lies a secret hospital – a tiny well-kept and well- loved operating room the size of a shoebox apartment. There are three surgeons, two operating beds, and ten nurses and caretakers who oversee a total of 3,000 inpatients in addition to a fluctuating amount of close to one million entries in and out every year. However, to be admitted to this hospital you must meet two criteria: you have to be rare and antique, and be made out of paper. 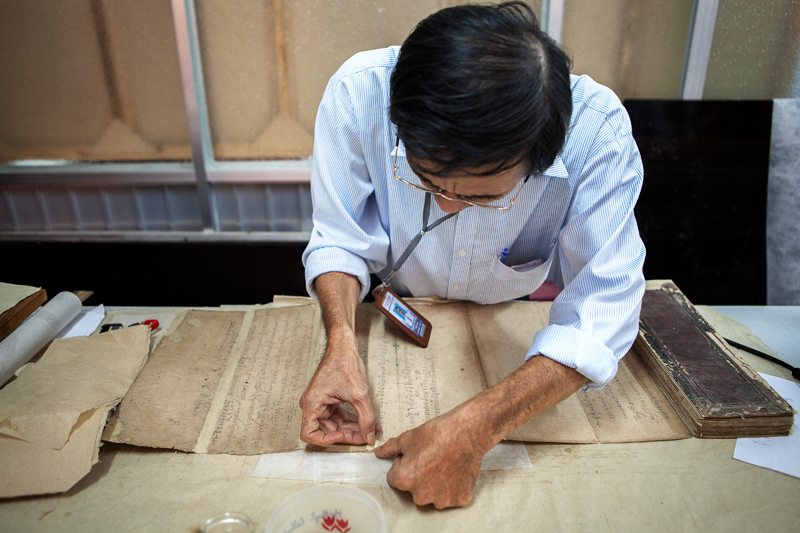 The hospital goes by the name of The Department of Preservation and Restoration, shortened to simply Preserve and Restore (PAR) by its residents. It is the youngest department of the restricted access area of the Ho Chi Minh City Library of General Sciences, and is the only place in all of southern Vietnam where dying books – rare and antiques, maps, documents, and aged torn papers that have seen firsthand the turmoil of Vietnamese history – can be brought back to life. PAR has three main functions: preservation, restoration, and digitization.

PAR officially started in 2000 when the Library of General Sciences invited two antiquarians from Cornell University (US) to Vietnam to provide training to their staff. Prior to this, PAR was simply a book binding room. Its true origin, however, began much earlier than that, in as early as 1996 when the then-Director of the library, Nguyen Thi Bac, was sent on a one-person training trip to the US. It was from Bac’s trip that knowledge of antique book restoration began trickling back to Vietnam. Out of the original staff in 2000, only one remains till this day – a senior staff member named Quy who now acts as the chief specialist restorer and main surgeon of the entire operation. 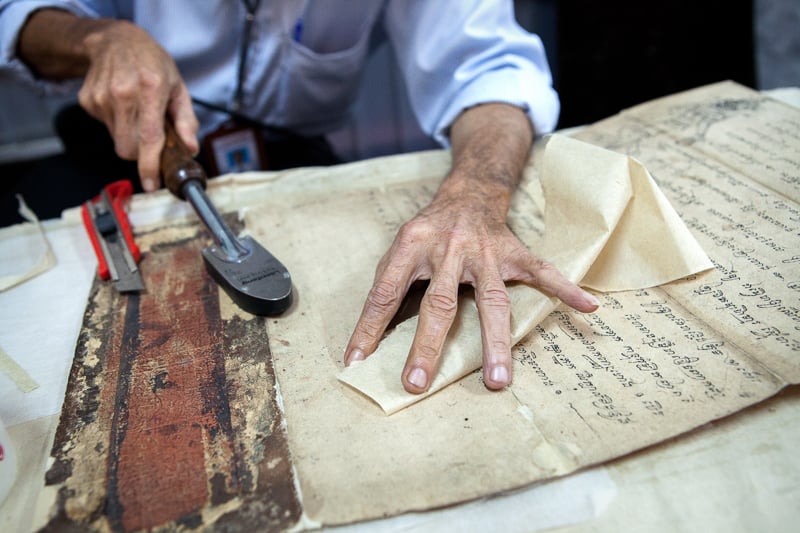 “It’s a quiet, patient thing, what we do. As you can see, not many people actually know about us,” says Kim Anh, the chief of PAR. “It’s an unglamorous and unforgiving job that requires your full attention to the most minute of details over weeks or even months at a time. A single page can take as much as a month to restore, a full-size book as much as half a year or longer. And we have a total of 3,000 rare antique books to care for, and beyond that, nearly one million public titles that also need someone watching over them.”

“The environment needs constant monitoring – PAR’s main and storage rooms, the cellars, shelves, and the processing rooms – the entire building actually. No sunlight. We have blinders on all the windows and somebody is always checking on the sun. Heat and humidity, neither of which are easy to control, of course, but if we don’t do that, the texts will either rot away or dry up and fall apart.” 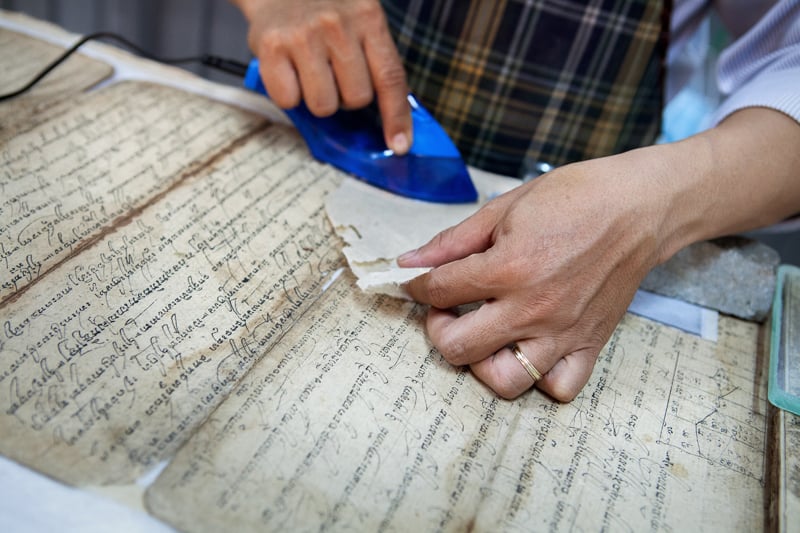 She adds: “The tools we use are that of real surgeons. Scalpels, chisels, cutters, standing scopes, clamps and forceps, even surgical room needles. We have them all. A surgeon can walk into this room and he wouldn’t lack for a small operation. The only few things we have that aren’t taken from a surgeon’s tool list are things specific to our specialty, such as paper thread used for sewing up tears, non- acidic paper glue, or a handheld bookbinder’s iron. There is no room for error, since the books we are working on are considered national treasures and part of the Vietnamese cultural heritage. They are hundreds of years old. Some of them are on the verge of falling to pieces and probably would have if we hadn’t sealed them up. The government has strict rules regarding our handling of these books and texts and one slipup is all it takes to see a veteran staff out the door.” 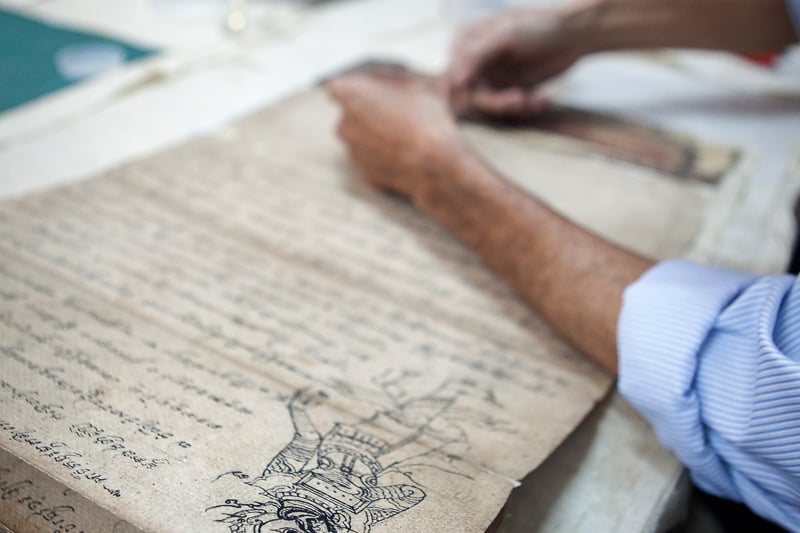 From that first starting point in 2000, it took a full five years for the department to grow to a level where it could start offering its services to outside libraries, museums and private collectors.

“I won’t say it’s tough asking for funding,” says Kim Anh. “We do have funding, of a sort, VND40 to VND50 million per year. Sometimes a couple hundred million if we need new equipment for digitization.” This amount is roughly the equivalent of a national football team member’s monthly salary. 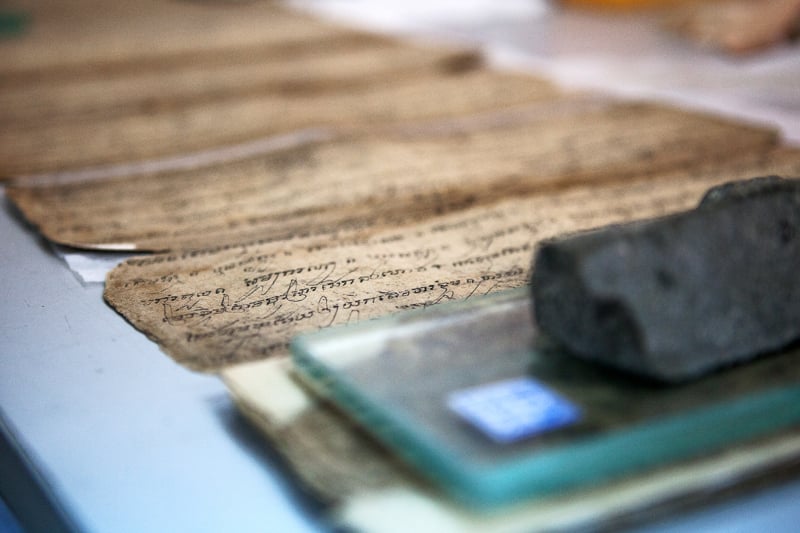 “What I will say, however, is that there’s still not enough attention paid to the importance and necessity of book restoration. Out of our three functions, the fund is actually almost exclusively for the digitization team since it’s the only one mentioned in the government charter on the preservation of our cultural heritage. Preservation and restoration have to get their funds from those earmarked for digitization. There is no charter and no campaign that calls for book preservation and restoration. So while people on the outside are clamoring for the creation of an online library of our digitized historical texts, the real articles are left forgotten and locked away to rot in our cellar.”

Despite these challenges the staff at PAR aren’t daunted. “We have done this for more than a decade. We are plenty patient,” they say. “And we are teaching other people, other libraries in other provinces about book restoration and preservation. We are making sure the knowledge we got from our foreign teachers isn’t lost along with the old generation.” 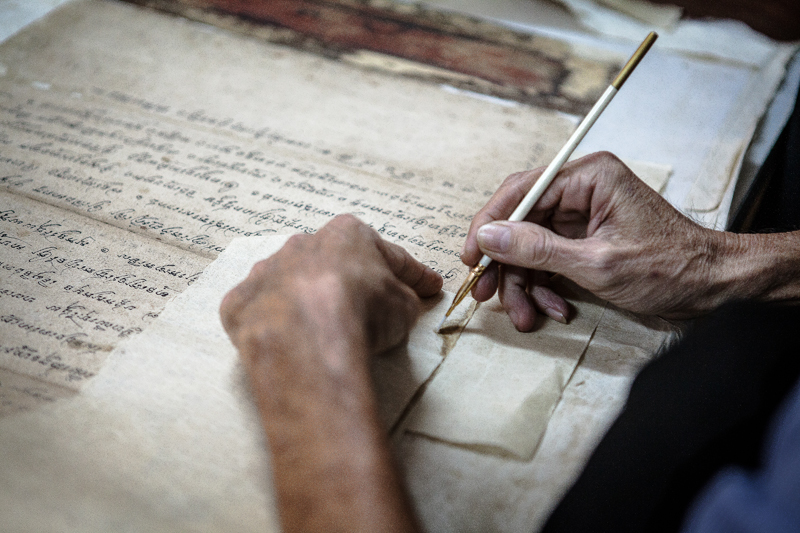 “If I have to put it in words,” says Kim Anh, “an antiquarian restorer is both a doctor and an artist. A doctor because you really have to know what you are doing and be really meticulous about it. An artist because only an artist can work on a single piece, on a single cause for months or years and not grow tired of it. Truly, it’s a job fit only for the most fanatic of book lovers.”