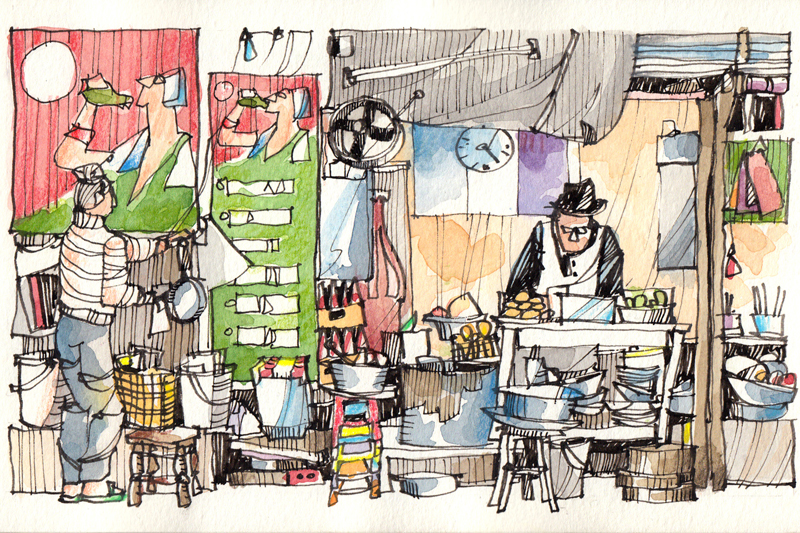 Nothing Hidden, Everything Sacred

Sketching the textures of Vietnam…

McCurry was speaking of India, “where millions have no home but the streets, virtually every life event is carried out in public: prayer, eating, sleeping, nursing, crude dentistry, even bodily functions,” but his description could easily apply to Vietnam, where life, in all its gritty glory, is lived on the streets. 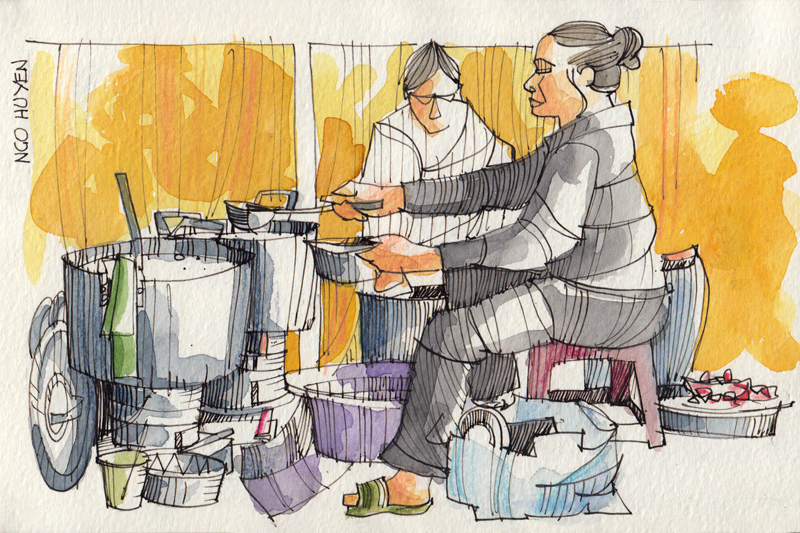 That sense of raw, uninhibited openness has inspired many an artist, including Argentinean architect, photographer and urban sketcher, Jorge Royan, on a recent trip through Vietnam. Armed with his pencil case and watercolor box, this swarthy, animated man walked Saigon’s back alleys, peered into homes and generally got lost in the textures of the city.

“In the US, people may be sitting and eating together in a McDonald’s, but you feel nothing from them. They’re hidden behind a mask. In Buenos Aires [where Jorge lives], there’s a long history of insecurity, so everything is secluded, everything is behind doors. You go to the West, you have the cars and the front of houses ― that’s all you see. They’re capsules. Here in Vietnam, you see the shops, the houses; people eat out on the street so you can see what they’re eating. On motorcycles, you see everything they carry. Amazing! There’s also a huge sense of community, people living in swarms of social hubs, eating, working together. Everything has color. Here, things have texture, depth, light and dark. In Vietnam, everything has a soul.” 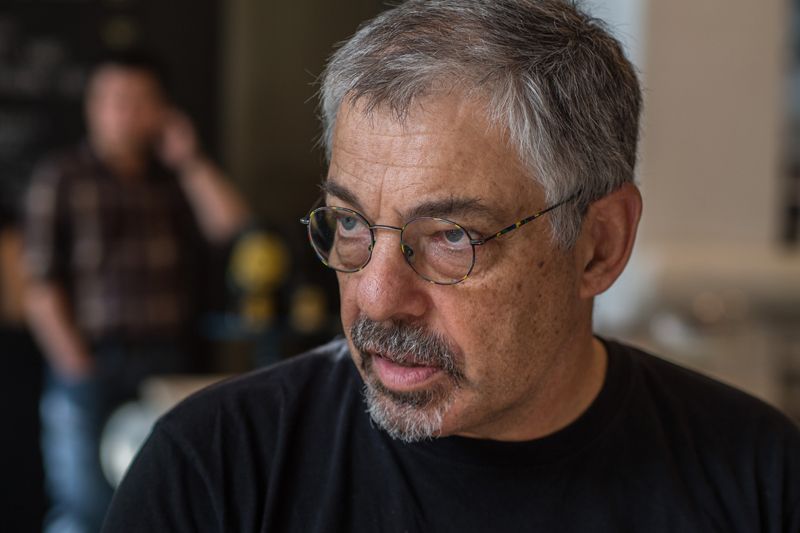 With a background in architecture and photography, Jorge brings a tangible structure, a certain proportional rigidity to his detailed sketches which take on strong architectural tones. In his one month trip visiting Hanoi, Hue, Hoi An (where he coincidentally met Oi’s “Postcards From Vietnam” columnist and fellow watercolorist Bridget March) and Ho Chi Minh City, Jorge has been filling up a smaller Moleskine notebook with his hour-long sketches of cyclo drivers, itinerant vendors and people going about their everyday lives.

Jorge is a part of a growing movement called “urban sketching,” a group of like-minded individuals finding camaraderie through a shared love of paper and ink. Only reluctantly introduced to sketching about three years ago (“I thought it would be boring”), he says he was instantly hooked. “It became about where to sketch and with whom to sketch. I used to work in photography and there’s no people there; it’s highly competitive. Everyone hates everyone. But with sketching, people are very friendly.” 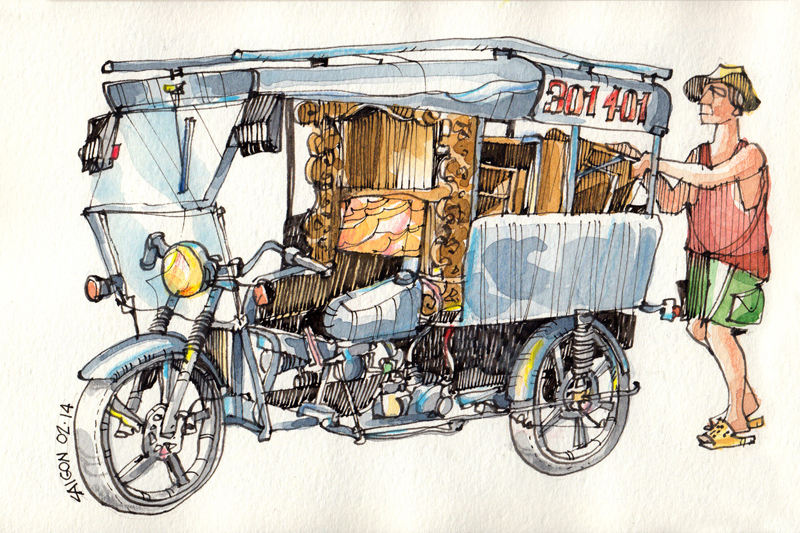 Jorge’s tools are mainly pencils and ink pens with calligraphic nibs and a set of watercolor paints, sometimes stored in a jerry-rigged altoids box or a tin of Starbucks mints with which he creates delightful vignettes, some incredibly detailed, of places he’s traveled: a café stairwell in France, a barbershop in Seattle or a piazza in Bologna.

“In my country [of Argentina], we live in constant fear. In Buenos Aires, there is a lot of violence and social confrontation. It’s not safe. [When I sketch outside] I sit with my back against the wall. Guys could just walk up and say, ‘I like your watercolors. Give them to me.’ That’s not a joke. But here in Vietnam, I’ve been working late nights on the streets and it never crossed my mind that I was in danger. I can find myself in a narrow alley, in the dark, and people will look at me but they’ll be friendly.” 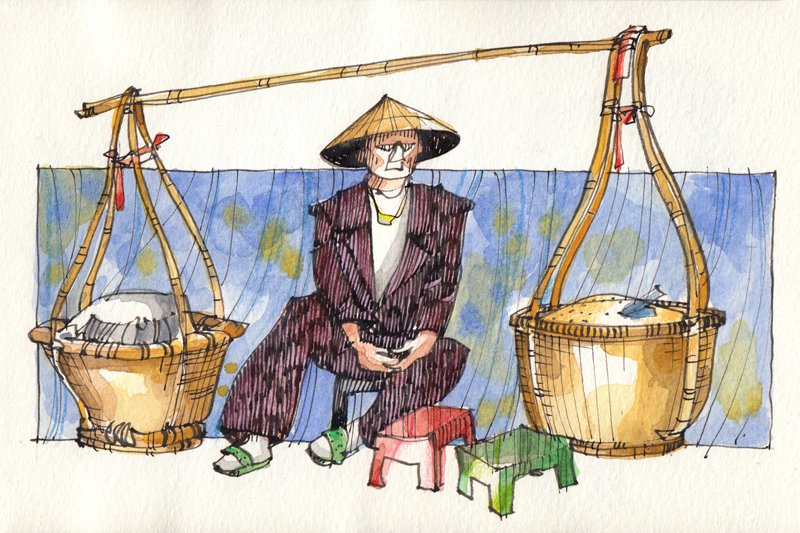 When he’s not able to draw in situ, Jorge often falls back on his photography skills, collecting images which he can sketch back in his Buenos Aires studio, eschewing the romantic notion of drawing inspiration from direct observation. “There’s a myth in my eyes that you have to draw right there to get the movement, the atmosphere of the place. Me? I feel nothing. It’s not about the atmosphere, the smells. Things are not things. Things are carriers of patches of color, black and white. I don’t care about the things. I don’t give a damn whether you can smell the steam from the food. I admire people who can feel the atmosphere. I wish I were like that but it’s not me. I think you can find the right angle, capture it in a photo and transfer it into art with all the time in the world.”

Instead of the “feel” of a place, what Jorge looks to capture are angles, proportions and depth. “As a photographer and a sketcher, you must be like a bird,” he says. “If you dropped a bird here, he would see all the corners, high and low. If the best angle is up there [as he points to the corner of the café we’re sitting in], you have to find a way to get there. When you begin moving, things change their position and space. It’s amazing how things change even if you move 10 cm to the side or to the front. For me, half the fun and half the problem is to find the right angle. Climb something, get under the table, put things in front of something else to get depth.” In his kit, Jorge often carries a Da Vinci frame, a graduated cellophane window, used to determine perspective and proportion, to help re-create 3D images in 2D. 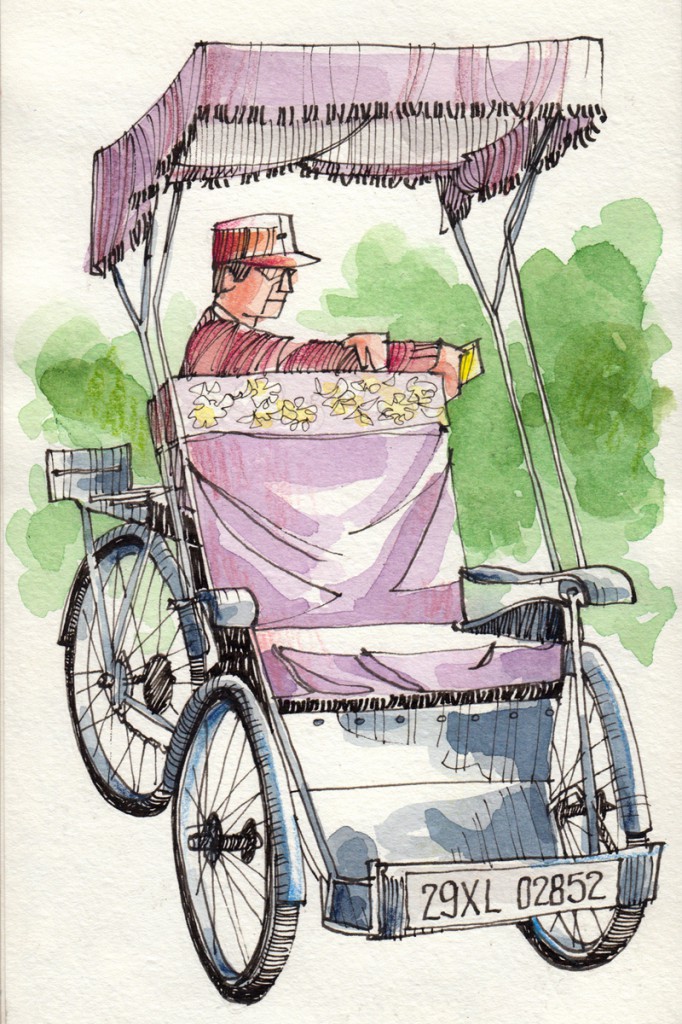 A Generation Missing Out
For this artist, the purity of Old School rings true. “There’s something wonderful with only a piece of paper and a pencil, nothing more,” he says, adding sternly: “Your generation is missing out. With AutoCAD or an iPad, you cannot add in all the details. You need to be able to sketch. I see how my daughter uses the pencil and her hand trembles. It’s like a different animal to her.” Photography is different, he’s quick to point out. “Digital is better than film. It’s amazing what colors digital can pick up in the shadows. Shooting film is like hunting your own food. It’s heroic, but who wants to be a hero?”

For the most part, Jorge is a proponent of simplicity. “The fewer tools you use, the better. On internet forums, you’ll find mostly people talking about equipment, lenses. But to talk about composition and framing, it’s much tougher. If you get rid of all that and you just want to focus on an idea, the fewer tools you have in your box, the better. To choose something is to renounce other things,” he adds philosophically. 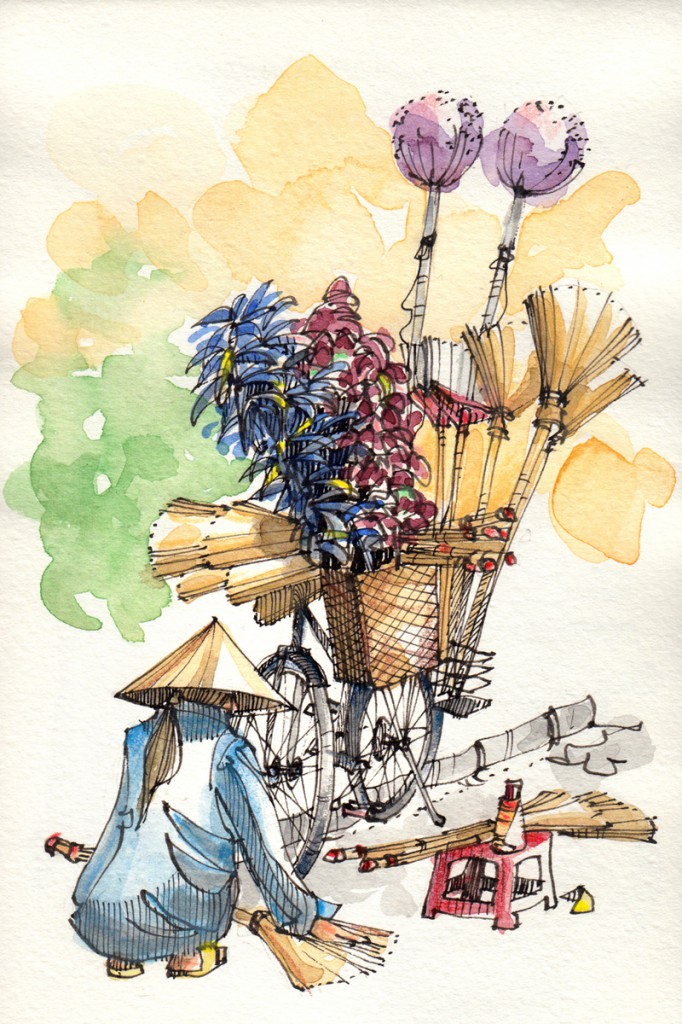 Originally involved in Urban Sketchers, a network of thousands of artists across the world who draw cities where they live or travel, Jorge now manages a much smaller Facebook group called Sketching Workshops, with around 150 even-level members, including four from Vietnam.

“I believe sketching is the best thing I’ve found for the benefit of many because sketching is really an excuse. Sketching is the ‘what.’ What comes is the ‘how.’ Through sketching, you can connect with people all over the world. You can exchange ideas and make friends and make something that’s pure, that doesn’t depend on screens, that’s not made on an iPad. It’s something so basic, so natural, so pure that it helps people join together and meet all over the world through the simple pleasure of drawing. It’s not about the sketch itself. Who cares about the drawing? It’s about the exchange.” 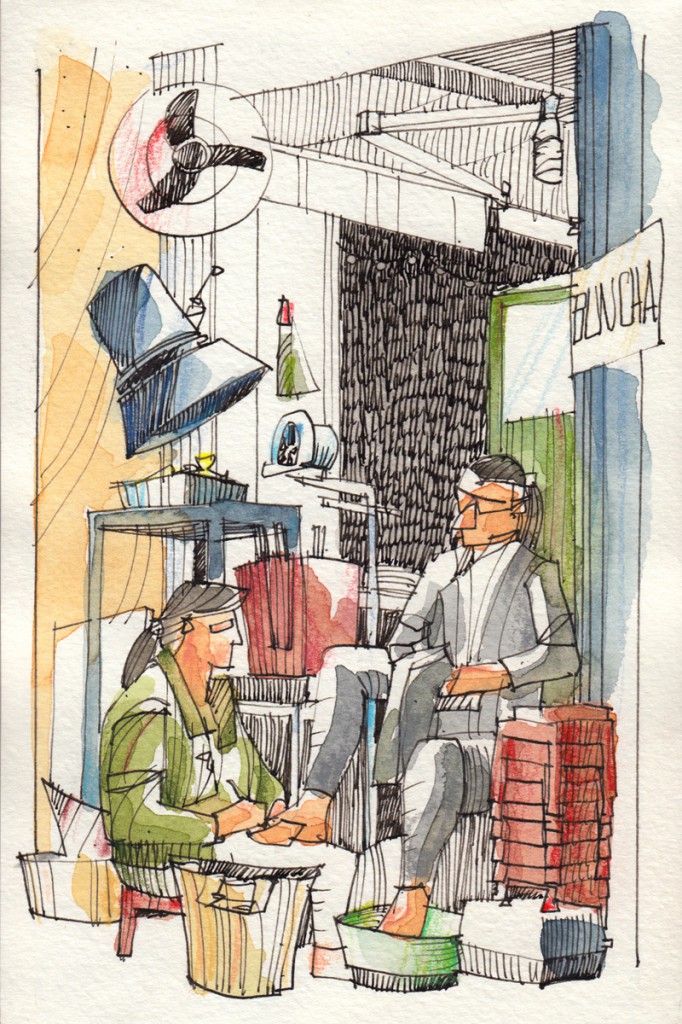 For more of Jorge’s work, visit his art blog at www.sketchesjr.blogspot.com or visit the Sketching Workshop page on Facebook for useful tips on how to begin sketching, including pen and ink work and drawing patterns and shapes.