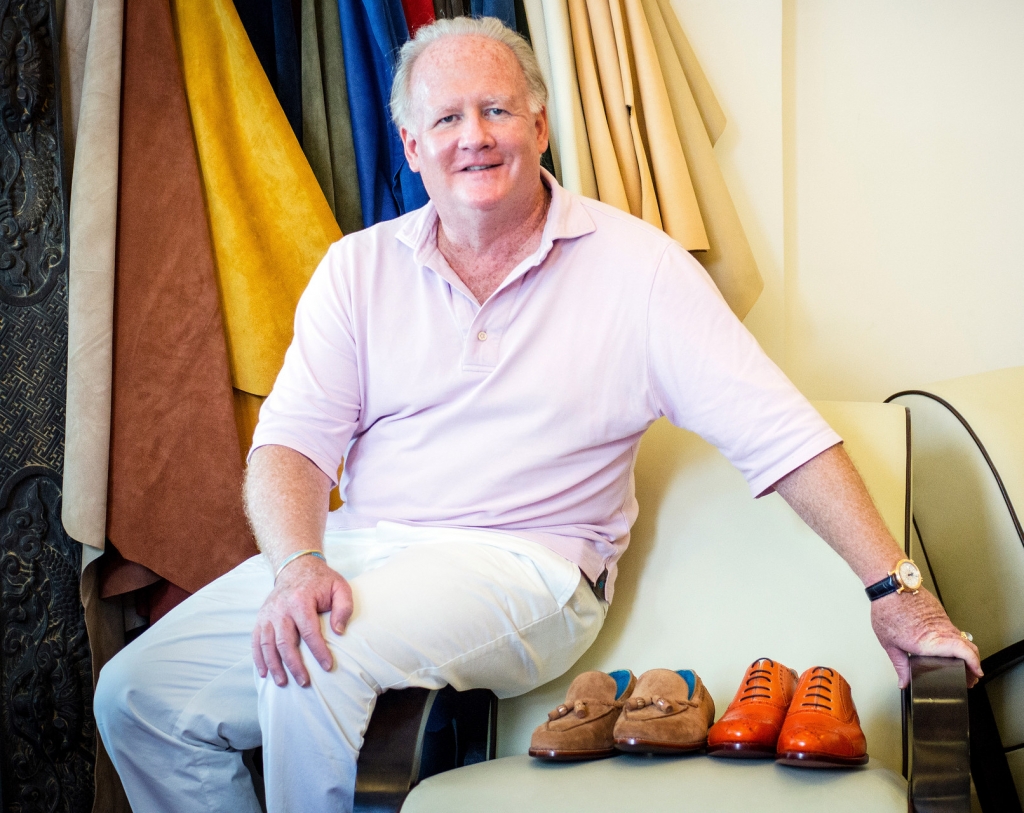 A second career for the most unlikely of shoe gurus

Clinton Kelly, American fashion consultant and media personality, once said: “Sometimes comfort doesn’t matter. When a shoe is freakin’ fabulous, it may be worth a subsequent day of misery. Soak in Epsom salts and take comfort in the fact that you’re better than everyone else.” “Comfortable is basically a euphemism for ugly,” agrees UK banker turned shoe designer Dominic Price and the creative force behind Dominique Saint Paul (www. dominiquesaintpaul.com). “But I don’t believe at all in enduring pain in pursuit of having beautiful shoes. They should be comfortable without looking comfortable.”

Surrounded by some of the most exquisitely crafted brogues, loafers and monks, today Dominic is clad in a simple tan suede driving shoe, in sharp contrast to some of the unexpectedly colorful, whimsically embellished luxe shoes in his District 1 shop. An amalgam of the unisex, francophone version of his first name and the Saigon clinic where he was born (now the Eye Hospital on Dien Bien Phu Street), Dominique Saint Paul is what this selfdescribed “Imelda Marcos” facetiously calls the result of a mid-life crisis. Born in Saigon and raised in India in his early years, Dominic has been obsessed with custom shoes for as long as he can remember. “My mother was an invalid with polio so she always had to have shoes made for her. Even as a child growing up in India in the 60s, you didn’t go to a shop to buy shoes or shirts; you tended to have them made for you. That’s how the world was. It was very natural to choose fabric to make a shirt, or leather to make shoes. Later, when I started to work in London, I remember walking by the best shoe houses and looking enviously at these phenomenal shoes which were too expensive for most people to afford, and certainly for me. It became my passion to design shoes and make very high quality shoes for myself.”

As a 25-year-old, Dominic took his shoe designs to a shoe fair in London in search of a manufacturer. “I found one which took an initial order of 48 pairs which was all I could afford to fund,” recalls Dominic, with dreams of creating a winning shoe that would move him up the design ladder. “I spent weekends at the factory in Northampton, learning everything I could about the manufacturing of shoes, much to the curiosity of some of the workers there.” But the budding shoe designer’s dream had to wait. The manufacturer bumped his order to the next year. “As a consequence, I was disenchanted by how tough it was for a young designer to get a leg up. There was nothing I could do, so I took a job offer trading bonds in an investment bank,” following in his father’s banking steps. “I thought I would go and work and save up enough money to be able to do this at some future time. I then got married, had children and made a career out of finance.” Indeed, an internet search for Dominic Price leads not to articles on tassels and soles, but to a successful financial career as Managing Director for India and Sri Lanka at JP Morgan Chase Bank and as CEO of JP Morgan Vietnam. 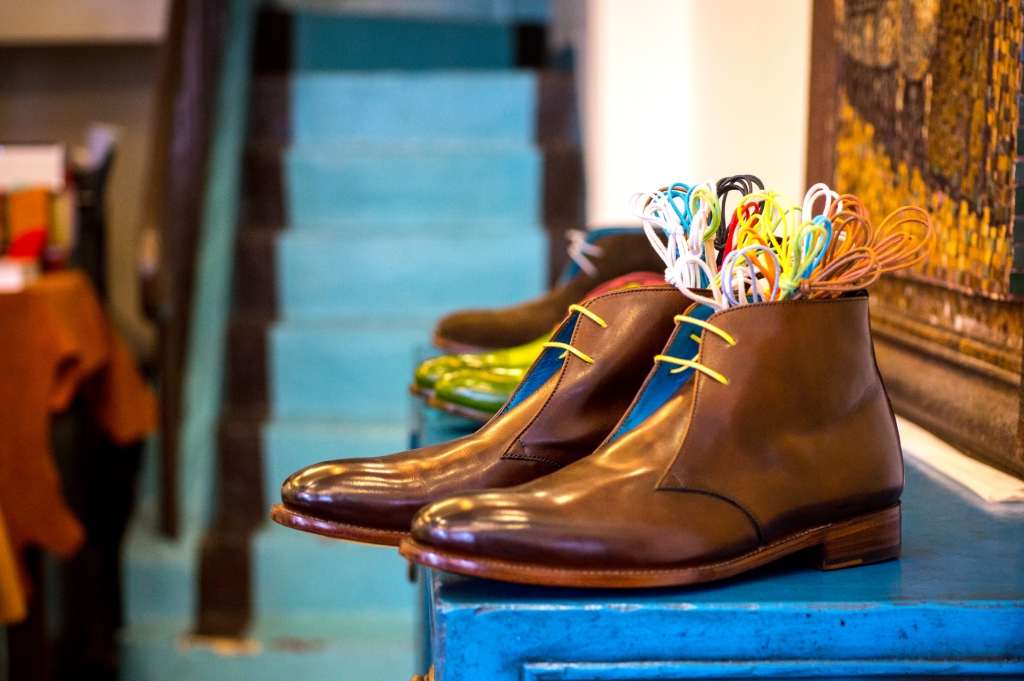 When in Vietnam, Dominic by chance read about an elderly cobbler in District 3 and subsequent visits, old designs in hand, revived his passion for shoes which in turn rekindled his passion for shoe design, a passion dormant for nearly 30 years. While celebrating his 50th birthday he had an epiphany. “I said to my wife that I had always been passionate about making shoes, but never pursued it and I wasn’t going to get to 60 without trying to do so. So I guess [shoe designer] is my alter ego,” he laughs. “Or you could say banker is my alter ego. Many people go through life not knowing what they want to do. The travesty is in knowing but not being able to do it.”

At Dominique Saint Paul, customers first try on a fitting pair to make sure the shop can fashion a shoe for them. “Then the fun begins,” says Dominic of the myriad customizations available. While the shop doesn’t make bespoke shoes per se, they can customize any one of their 13 different but traditional styles of shoes, including color and patternization, using a combination of materials like leather and suede, in essence creating a ‘one of a kind’ shoe. “This allows for a great deal of latitude. Like buying a Rolls Royce, you can choose the extras that you want but you can’t redesign the car. I’m a great believer in style being people expressing their own personality, on purpose. A lot of people would love to wear something a little bit different, but they don’t have the courage of convictions or it’s astronomically expensive. This is an opportunity to express themselves through what they wear, and to have a pair of high quality, very comfortable shoes.” 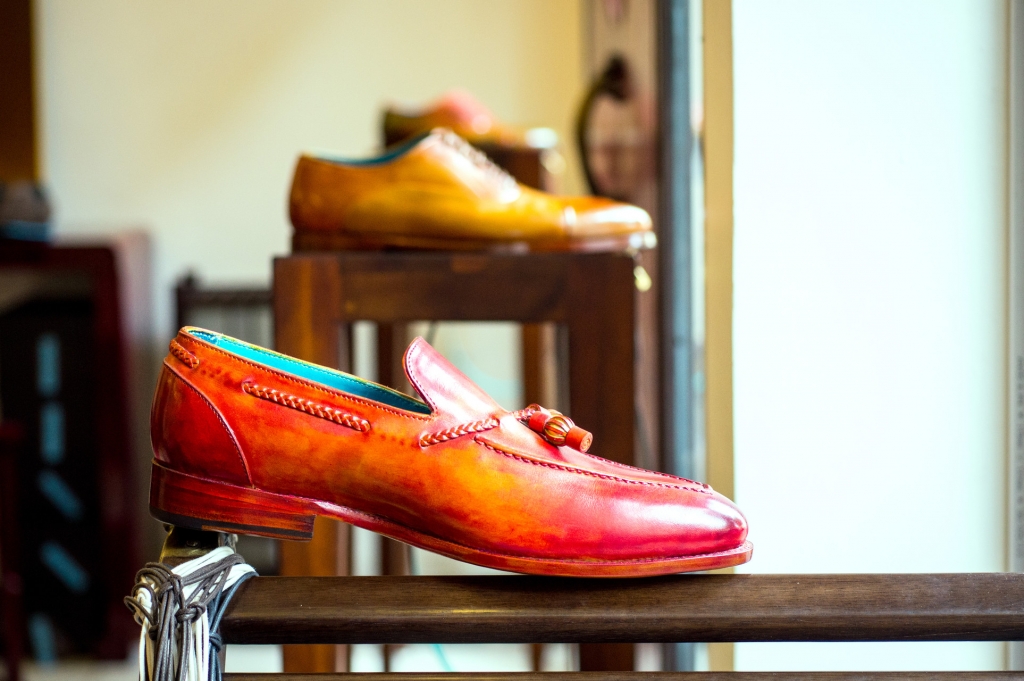 While the lasts around which the shoes are formed come from London and the crust (unfinished) leather is imported from Florence, the construction and finishing of these shoes is strictly done in Vietnam using traditional European methods. Some even feature a Vietnamese twist, like a Dong Son star motif, either in the broguing or as a mother of pearl inlay, or an actual pearl embedded in the lantern-like tassels. “We’re not trying to overdo it, but we wanted something to distinguish these shoes as Vietnamese. You know, Vietnam is a huge producer of shoes, but they tend to be mass market instead of high-end. I’ve talked to luxury shops in Singapore who say ‘We’ll carry your shoes if you say they’re not made in Vietnam.’ But we’re proud of that fact; we don’t want to hide it. Saigon and Shanghai are incredibly stylish cities in Asia, crucibles of creativity. There are a lot of creative people here, but it’s frustrating that a lot of high quality creativity just gets exported rather than being sold here. The stereotype is that lacquer and crafts are what there is to buy, but there are so many other things made here at a very high standard. Even the Vietnamese are surprised by the fact that [other Vietnamese] can turn out such a fantastic product. Sometimes it’s the foreigners who believe more in the Vietnamese capacity than many Vietnamese do.