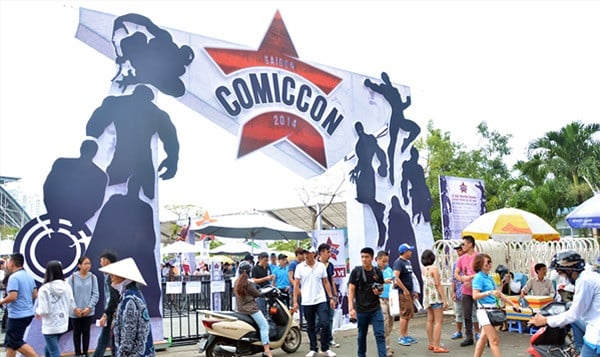 Dig out that costume hidden in your closet, Saigon’s first comic convention is happening this month

For fans of DC and Marvel comics, video games and Japanese manga, Comic Con needs no introduction, it’s an international phenomenon. The first comics convention was an event called “Comiccon ’64” held in New York City in July of 1964. Science fiction conventions started gaining popularity in the 1980s. The first San Diego Comic-Con, the most-attended comic convention in the country, was in 1970. This month, it lands in Ho Chi Minh City for the first time.

Oi speaks to Anna Thu Nguyenova and Kyle Farr, the people behind Saigon Comic Con, on geek culture, how they did it and what visitors can look forward to.

Why is Comic Con so popular?

Anna: Describing it as a pop culture event in no way captures the excitement of Comic Con. To its fan, it’s not just a comic convention. It’s Comic Con! As to why it’s so popular, we think a large part of it has to do with cosplay. It’s the same reason as why Halloween is so popular. People like to dress up… sometimes crazily. The difference with fans of pop culture is the stigma, especially in Vietnam because you can’t go around dressed up as a fictional character without people thinking you are crazy. And comic books, manga and video games in Vietnam are treated as children territory and not something adults should waste time with but a lot of fans are adults who want to celebrate their passion without being judged. Comic Con takes the stigma out of the equation. At a Con, you can go as crazy as you want and be saluted by like-minded people.

Kyle: In short, Comic Con is a celebration of geek culture. It’s where you show your geek pride.

When did the idea of holding Comic Con in Vietnam start?

K: Basically we arrived in Vietnam a couple of months ago. We were looking around for interesting things to do. We thought perhaps we should do a Color or Prisma run, but there are already so many people doing the exact same thing in Saigon. Then we found out that there was no Comic Con in Vietnam.

A: In August, we did a test to see if there was a demand, a simple online pre-registration. It was just a random website hosting an info sheet. We posted the link on a Vietnamese League of Legends fan site. Within the first week, we got 1,000 pre-registrations. And all that traffic was from a single forum post saying: ‘Hey, guys! Comic Con!’ and a link. We did no marketing.

K: It was then that we knew this was a validated concept. 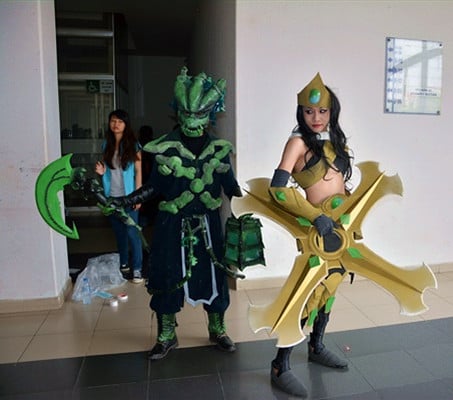 Did you face any difficulties organizing it?

K: It’s a lot of work but surprisingly we received help from a lot of people. Since we set up the company, people started finding us and asking to partner up. Upbeat ticket channel was the first one to get on board. Marvel and DC themselves sent words to keep them up-to-date with future Cons. It turns out they want to enter the Vietnamese market themselves in a couple of years.

How are Comic Con fans here different from the ones in the US?

A: In America, the people who go to Comic Con are adults. Eighteen is the minimum. Here, we are looking at a lot of young adults, teenagers and little kids accompanied by parents.

VND180,000 a ticket isn’t cheap for a convention here. Vietnam has many manga conventions that are cheaply priced or free. Do you think that price tag will lower your turnout?

A: The thing about free or very cheap conventions is that they tend to be of low quality with unremarkable products, little to no content, or at an inconvenient location. We, on the other hand, want to bring really good content to our people and good content costs. San Diego Comic Con for example costs USD70 for entry, and if you want a signature from someone from the set of Game of Thrones that’s going to be another USD40. You can’t get Angelina Jolie or Robert Downey Jr. to come sit in your Con panel for VND50,000 per ticket. What we want to do is establish ourselves as a legitimate Comic Con and not your cookie cutter manga convention for teenagers. This year, we hope to set a standard that people will eventually get used to. Luckily, a couple other conventions in Vietnam are starting to charge upward too so we are not alone.

What can visitors look forward to at Saigon Comic Con?

A: We will have a one-day League of Legends tournament, played by Saigon Jokers and Fantastic Five. We have lots of booths selling really cool products. We also have a panel showcasing Vietnamese voice over artists and how they do their work.

We have several artist shops that are the only one of their kind in Vietnam. We’ve got the only shop that sells DC and Marvel comics in Vietnam. A couple of our partners and sponsors, such as VinaGame, will also be giving away free limited products and limited discounts. Esport fans can’t miss the League of Legend tournament. And if you forget your cosplay or don’t know where to start, Zombie Home Shop will be renting out cosplay outfits all day long.

Tell us more about the Comic Con Junior section.

A: We have an entire section for very young children in the Con, a playground, a place where they can read free comic books, and they are going to show the voicing for Doraemon.

Our sponsor absolutely insisted upon it [Comic Con Junior]. Children are a huge market for comic publishing houses here so it’s no surprise. Another reason is that the market here is vastly different compared to the market in San Diego. In other countries, it is the adults who want to go to the Con and relive their dreams; here it’s the children. We had to adjust a lot of things, this included, to cater to the market. This is a Vietnamese Comic Con after all.

Do you think now is a good time for the first Vietnamese Comic Con to debut?

A: Absolutely. Geek culture in Vietnam is in a very interesting phase right now. There are a lot of changes happening in between the generations. Take gaming, for example. Before it was kids’ territory and something most parents don’t want them to focus on. Now we have esports as a legitimate career and industry in Vietnam. It’s really pulling in a lot of money and where there is money then people will start paying attention and perhaps change their bias about things.

K: Young people in Vietnam are more aware and more immersed in the global pop culture. Take The Avengers, for example. People really love the movie and now they want to see the comic books too. DC and Marvel aren’t widely sold in Vietnam yet but it’s a matter of time.

Once the Con is done, what will you do next?

K: We will be looking at Hanoi Comic Con. 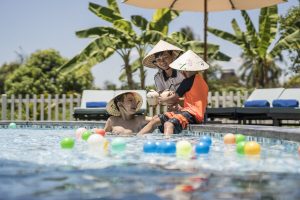