A growing group of enthusiasts are pioneering a Saigon aquaponics movement – creating the potential to produce sustainable food in your own home.

A mechanical engineer, a medical equipment specialist, a biotech worker and a budding IT technician are redefining
the purpose of rooftops as simply places to dry clothes; they are pushing for a rooftop aquaponics movement. Collectively called Vnaquaponics the team of four are among some of the pioneers of aquaponics in Vietnam.

“Aquaponics is essentially the combination of aquaculture and hydroponics,” explains Huynh Minh Thuan, the spokesperson and medical equipment specialist of the group. Aquaculture is the practice of rearing water-bound animals in tanks. Hydroponics is its plant-based counterpart. “In aquaponics, we build a symbiosis system using fish and plants. The fish live in one tank, the plants grow roots in a connected tank. Fish create nutrient rich water by producing organic waste and attracting bacteria. Plants then extract nutrient from this nutrient rich water, thus cleansing the fish’s habitat. Plants also shed leaves and other plant materials into the water supply, and the fish eat this plant waste. And there you have it, a complete and self-contained food production cycle that requires minimum land resources or human intervention.” 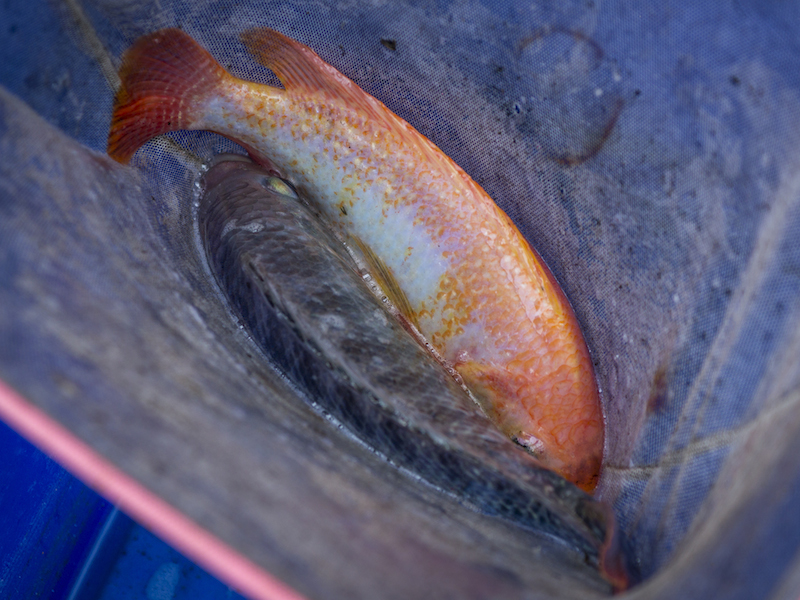 In other words, aquaponics is the future of ecological agriculture. Not only does it maximize limited resources, it also produces far better yields than traditional farming and requires neither the use of growth hormones or constant human care. A good aquaponic system can run on automated mode for weeks, needing only the occasional harvests to keep the plants from overgrowing. The cost of building a full-size aquaponic system is roughly VND3 to VND5 million per square meter depending on the complexity of the system. 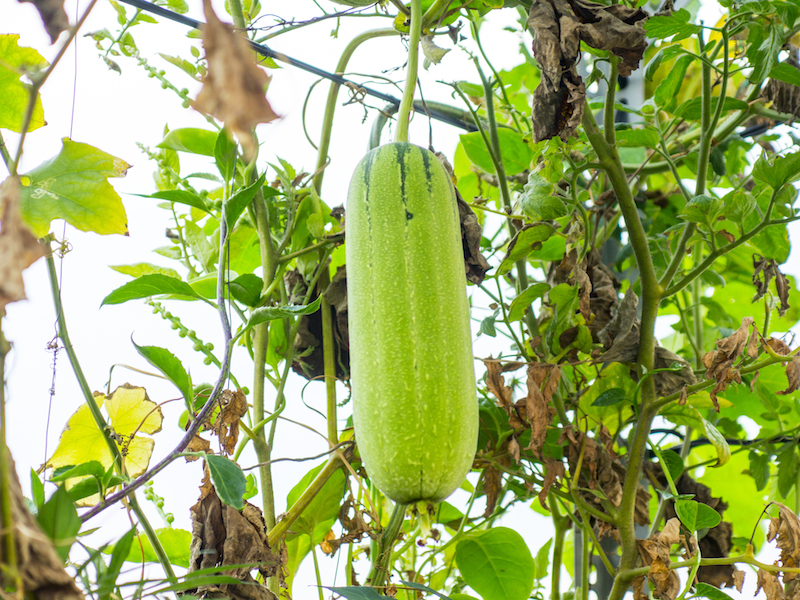 According to Thuan, aquaponics is still relatively unknown in Vietnam, where the community is composed mainly of hobbyists rather than professional farmers.

“We are basically a bunch of guys who know our way around wrenches and DIY projects, have some knowledge of gardening and are either concerned or made to become concerned about the state of our food safety by our wives or girlfriends,” shares Thuan.

“A couple of years ago, there was a food scandal involving chemically contaminated beansprouts. People were so scared of being poisoned by these toxic beansprouts that many started looking into growing clean beansprouts in the privacy of their home. So they started searching for tutorials online and you know how Youtube likes to suggest similar topics to watchers. One thing led to another and that was how the aquaponic movement starting appearing in Vietnam, through sheer accident and food safety fears.” 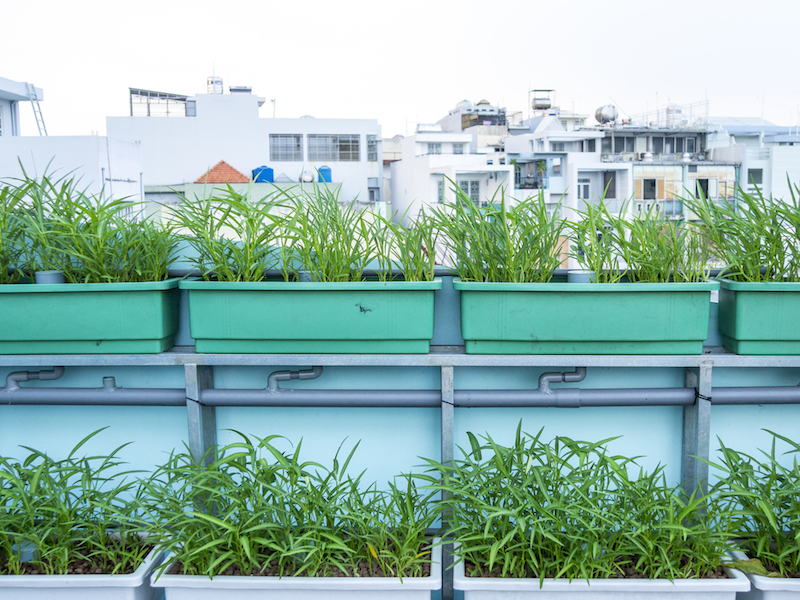 In terms of weather conditions, the country’s tropical climate and year-round sunlight is especially ideal for aquaponics. Ironically, at the moment, aquaponics in Vietnam is more popular as home decor than an alternative to traditional farming.

“Over half of our population is involved one way or another in the agricultural industry. You would think in a country like this, it would be the farmers who pounce on aquaponics tech, but no. It’s the ladies who fancy a lovely bouquet on top of their fish bowls that are the first consumers of aquaponics products right now,” says Thuan. 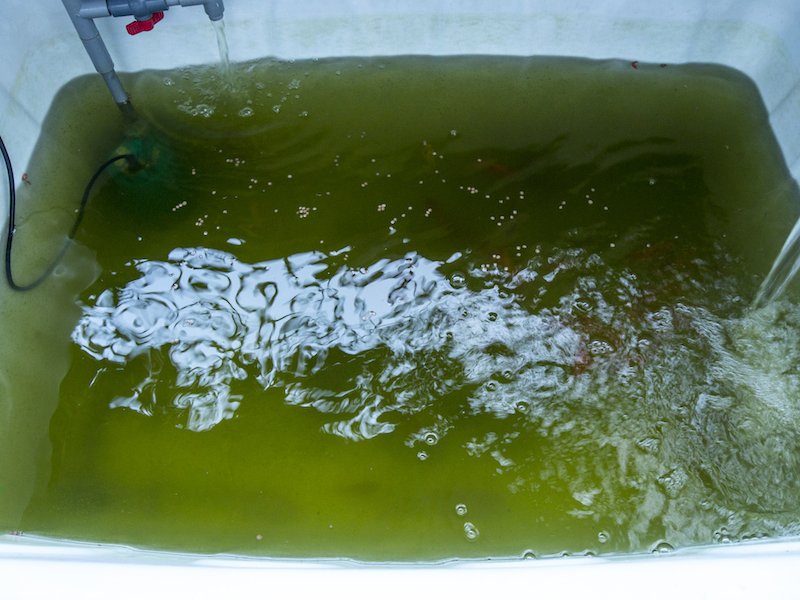 Explaining this puzzling state of affairs, Thuan believes the agriculture industry in Vietnam is mired in traditional technologies and out-dated thinking, and that despite several food safety scandals in recent years, the majority of local farmers do not understand or value clean, organic food produced by aquaponics.

“Your normal farmer, when we approached them with an aquaponic model we designed specifically for Vietnam, is not very interested. From their perspective, they have worked the same way for centuries so if it isn’t broken, why change it?”

Which is a shame, according to the group, as Saigon holds tremendous potential for aquaponics with its ideal weather conditions and under-utilized rooftop space and, most importantly, a young educated population who knows the value of clean, organic food.

One of Vnaquaponics’s long-term goals is to change this general mindset towards food production and safety. “We have only just started out and are a long way from doing what we really want to do,” says Thuan. At the moment they have their hands full with several personal projects and some for clients.

“We learned how to build aquaponic systems from Western manuals and books, but the conditions of Vietnam are different from America and other European countries. A lot of adjustments in construction materials, plant and fish types are needed. A lot of adjustments in handling the fresh produce too since the yield in a tropical country is much more than in a temperate country!” Nhan, whose rooftop serves as the testing grounds for the group’s design and building trials, boasts that he has harvested more than 100 kilograms of fish within the last two months and that he hasn’t had to buy his greens from the markets for a long time now.

Recently, Vnaquaponics has started building an elaborate website as a hub for information on the topic. Though the site is not yet finished, it already holds a substantial amount of documentation on the group’s experiments with various designs.

“Our number one goal right now is to spread awareness and knowledge of aquaponics to the Vietnamese public,” says Thuan. “Once we’ve got the basics down pat, good business will soon follow.”