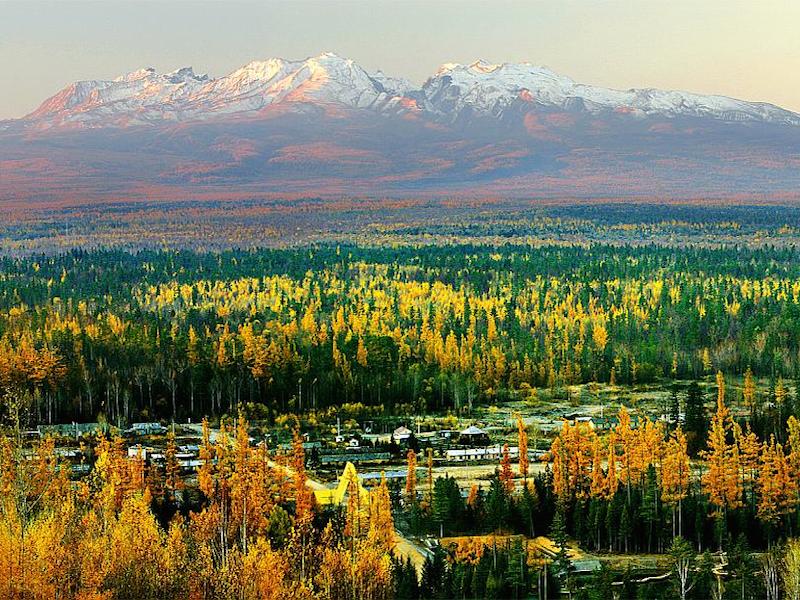 Every season is the best time to visit Yanbian – I chose autumn, when the forestlands of Eastern Jilin are overcome by auburns and golds just days into the fall. It’s as if the wind itself has laid the trees with copper leaf, spreading through the woods at the pace of ocean tides. They say that to see the old Korea, you really have to come here, to China.

Seoul has been Starbuckified to a pulp, Pyongyang’s had all its color permanently beaten out of it, and only Chinese Yanbian – the little-known third Korea – holds on to something of the traditional grace that invigorates this exquisite region. Beyond its current national borders, the old Korean nation survives in Yanbian, with its wood-framed homes roofed in rice straw, the old kang beds and shin-high dinner tables heated from below, the men in their white baggy pants and women in billowing hanboks, the same old folk dances and songs sung at dawn beneath the giant pines, just as they’ve always been sung. 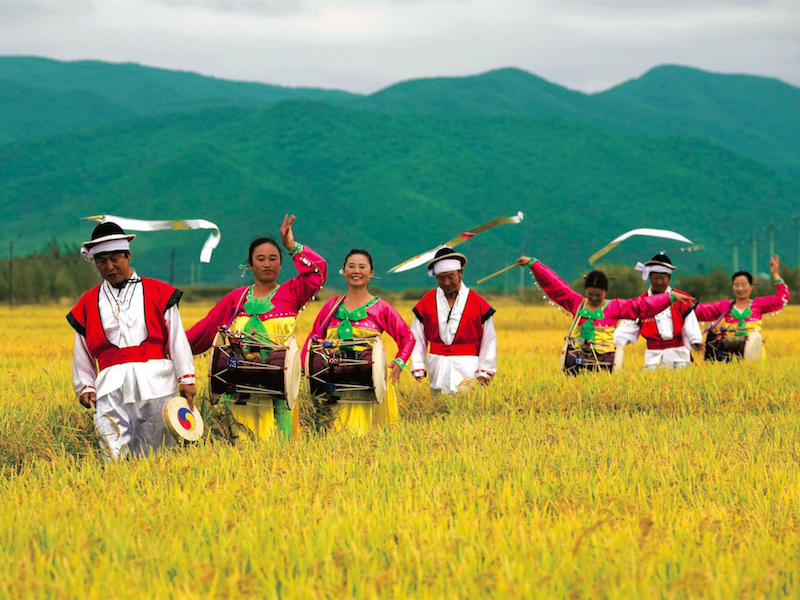 Any train headed for Yanbian bursts into the region from the industrial Manchurian northeast as the rail lines plunge into the untouched native pine forest, the bleak landscape of the Chinese hinterland suddenly vanishing behind them. Tigers and black bears still roam within those woods, and as I watched the watercolor hues of the forest strobing across the glass windows of my carriage, I could almost see them peering at me with their glassy eyes from beyond the treeline.

I was on my way to visit Changbaishan, the sacred mountain considered the birthplace of the Manchu and Korean peoples. Look at any photo of it and you’ll just want to be there – the clouds reflected in the pure, turquoise lake enclosed by the jagged lip of the volcanic crater, perched high above the ocean-like forest that surrounds it in all directions. 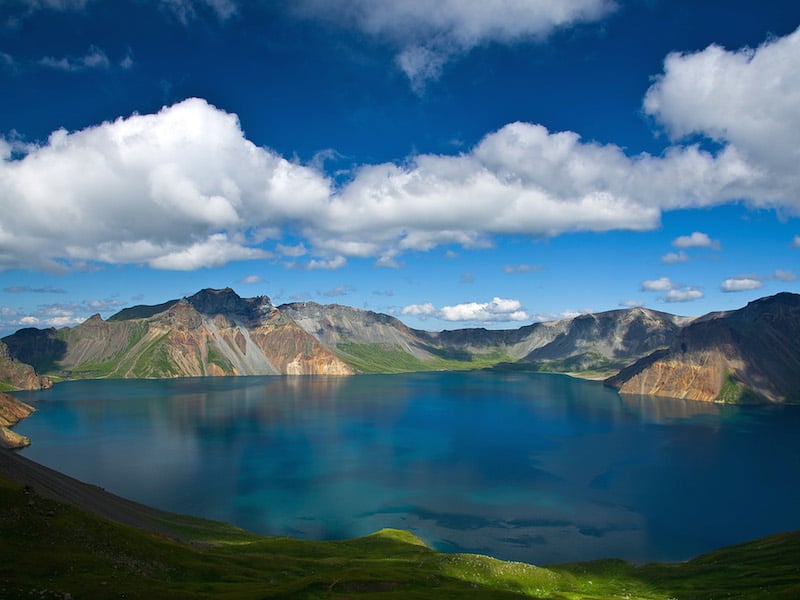 The destination is so unique that I’d have imagined it would attract hundreds of thousands of visitors every year, with people queuing up in airports all over the world to catch a flight just to go and see it. In fact, the area is only mildly touched by the tourism industry, and despite there now being modern highway links to the region, it’s still relatively remote and difficult to get to. As it stands, however, Changbaishan remains a destination that deserves the considerable effort it takes to reach it.

The train pulls in to Antu, one of the towns closest to the mountain, where I’ll stay before making the ascent. Antu is Yanbian’s major prefecture, but the residential precinct itself is modest in scale. Most of Antu is an official natural preservation zone for its unique forest and water systems, and for its rare variety of Korean pine tree, the Changbai Pine. Ethnic Koreans roam the woods in search of rare medicinal herbs, edible mushrooms, fruits and honeys – passing squirrels, otters and badgers along the way, ever watchful for forest beasts, lynx and leopard, tiger and bear.

If there was any doubt that I was in Korean China, a glance at any store or street sign would confirm it. The older generation are fluent in Chinese but literate only in Korean – and so on public signs, Hangeul takes pride of place over Chinese, added almost as an afterthought for the benefit of the Han Chinese population who are present but outnumbered – many of whom have learnt to speak Korean anyway to improve communications between the two interwoven cultures.

I needed breakfast, and chose a small, turquoise hut that seemed to have a mixture of Chinese and Korean meals on offer. Most good, cheap Chinese restaurants have warm steamed buns and dumplings or a hot rice porridge for breakfast, but this had all that and more – plates of pickled vegetables and spicy green chilies to chew on as you swallowed down the mouthfuls of rice and doughy bread. Some officials from the railway station were all kneeling around one small table, sectioned off in a traditionally-raised side room with heated flooring and sliding doors that was filling slowly with steam and the smoke from their morning cigarettes. They spoke in rolling, chuggy syllables of Korean, and joked with each other in Chinese.

Antu town is worth exploring for its proximity to the forest. I wandered along the river bank, decorated with street lanterns in the shape of great red Chinese knots, and crossed the bridge over the river. Elderly Korean women were doing their washing along the bank on the opposite side, and carrying the baskets of clothes back across the bridge, balanced on their heads in traditional Korean fashion.

The dirt paths winding up the slopes of Er Long Shan Park passed beneath trees with lemon yellow and crimson leaves, red dragonflies and copper ladybugs flying up among the branches and down across the straw-colored grasses. Through the trees, the farmlands of Antu were clearly visible; small old homes with wooden verandas all in line alongside broad fields, orchards and vineyards, and small cleared plots of land at the forest edge. Antu itself was an assortment of politely-angled roofs, small chimneys and brick walls, the unmistakable pastel-shade window frames you can see all over Chinese Dongbei opening onto small alleyways.

Night in Antu had to be celebrated with a real Korean feast. Just down from the railway station is a distinctively-decorated restaurant serving all the Korean Chinese favorites – bright red kim chi and tofu broth, hot potato cakes, mixed spicy vegetables and of course, Korean barbeque. I watched uncomfortably as fellow diners slurped their way through that most horrific of Korean delicacies – dog meat hotpot. Large posters of surgically-perfect Korean actresses holding bottles of potent soju smiled down approvingly from the restaurant walls.

I’d put aside the whole of the following day to experience Changbaishan itself. Getting to the summit of the mountain is done in a series of phases, each with its own admission fee.

I agreed on a price for a three-hour taxi ride to the park gates, and immediately wished I hadn’t as we sailed past the bus station with frequent services to the same destination. I regretted this decision again upon my arrival, as the entry ticket to Changbaishan Park is still 16 kilometers away from the mountain, and in order to be carried the final distance, I had to pay an entry fee for my driver as well.

I had to fork out a third figure for a pass to the mountain proper once I’d been dropped off – but at this stage I had far less concerns about the cost, as it was immediately obvious that the destination itself was worth everything I’d paid so far. I was approached by another tout to ask if I needed to be driven to the summit, but I wouldn’t hear of passing up the opportunity to take the stairs along a pathway that creeps upwards alongside the world’s highest volcanic waterfall. Cascading 68 meters from the crater, the water tumbles from the self- replenishing crater lake at 2,189 meters above sea level, and is the source of three great rivers through Jilin Province: the Songhua, the Tumen, and the Yalu, the last of which divides China and North Korea to the south of the Changbaishan mountain range. 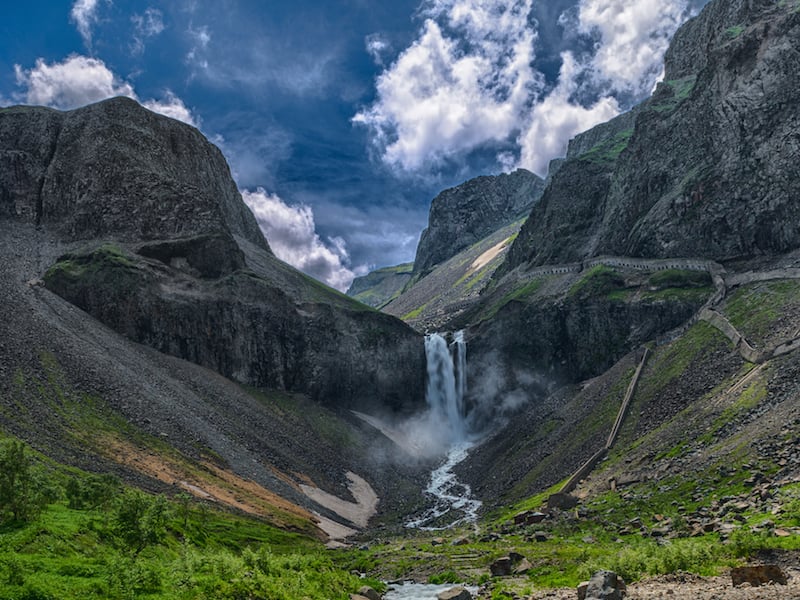 The mountain itself is a dormant volcano that has erupted six times since the beginning of the Qing dynasty, which, being a Manchu rulership, regarded it as the sacred crown of the holy Manchurian homeland. It also holds profound spiritual value for the Korean people, and the mountain (known to them as Paekdusan) forms part of their northern border that now bisects the lake. On occasion, foreign tourists wandering innocently around the crater are arrested for illegally crossing an international boundary line. 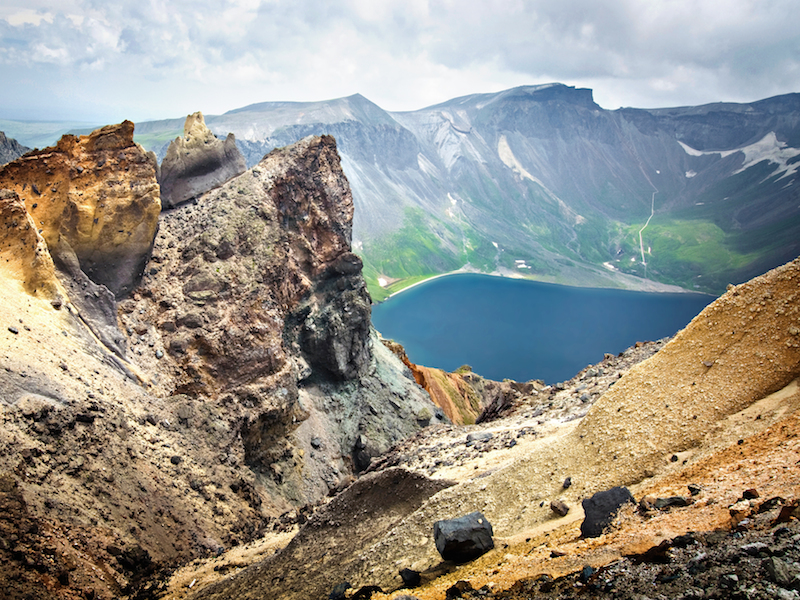 The hour-long climb to the summit is a challenge, especially considering the freezing late-autumn winds that blow through the covered passageways constructed about the long, stone stairway – but the arrival at the peak is breathtaking. A short hike along the river back from the falls (where the ground is a carpet of tiny towers of balanced stones laid by Korean visitors), and I was standing at the edge of the Lake of Celestial Bathing, no less captivating than the photographs suggest. They say the lake is a magical place – you can often see two different weather systems on each side of the mountain as if they’re too respectful to pass over the peak. Others say there are monsters beneath the waters.

It’s true that the feeling is magical – more than deserving of the pilgrimage it takes to arrive, across kilometers of ancient forest, long, winding pathways, and many an unscrupulous ticket seller.