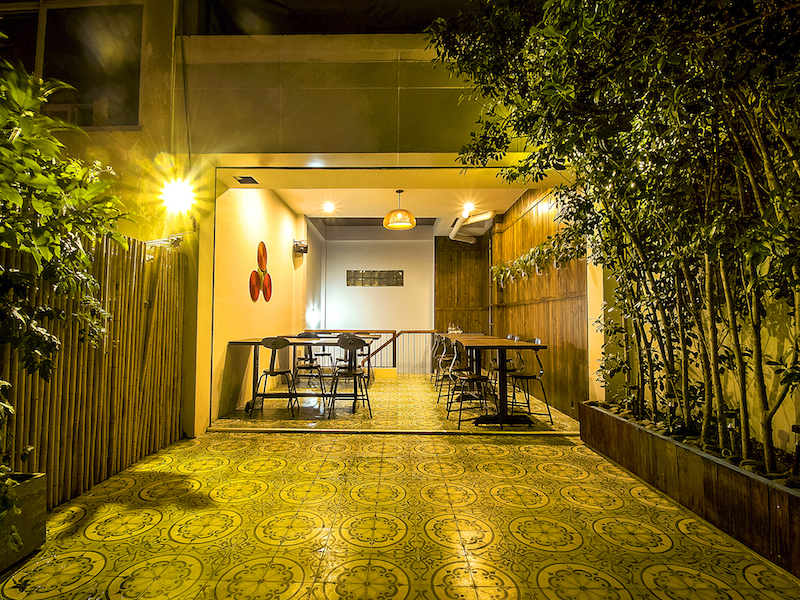 “Keep calm and eat chicken hot pot,” says a stenciled sign in neat lettering at Lau Dam Bong (7G Nguyen Thi Minh Khai, D1, down a small alley next to the HTV building). It’s as good advice as any I’ve received today, and when the hot pot involves drunken chicken, it’d be a travesty to refuse. 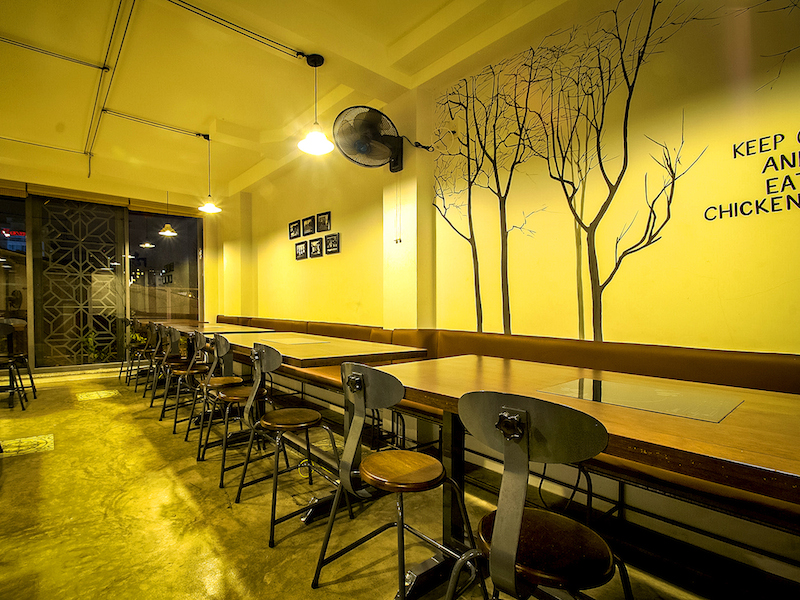 Opened in April of this year, Lau Dam Bong is the first foray into the world of restaurants for owner Nguyen Thanh Binh, setting out to recreate the dishes of the North. Born in Hai Phong, Binh took an interest in cooking when working as part- time kitchen help while earning a degree in Finance in Sydney.

The attention to detail of a first-time restaurateur is seen in the minimalist chic décor: clean painted brick walls and polished cement floors anchored by sleek wooden tables embedded with powerful heating elements for the hot pot. The restaurant is narrow, with just twenty or so seats on the ground floor along with a bar area, but deceptive in its size, as it encompasses five floors, providing seating for 120, with a dumbwaiter moving dishes between the kitchen and dining areas. 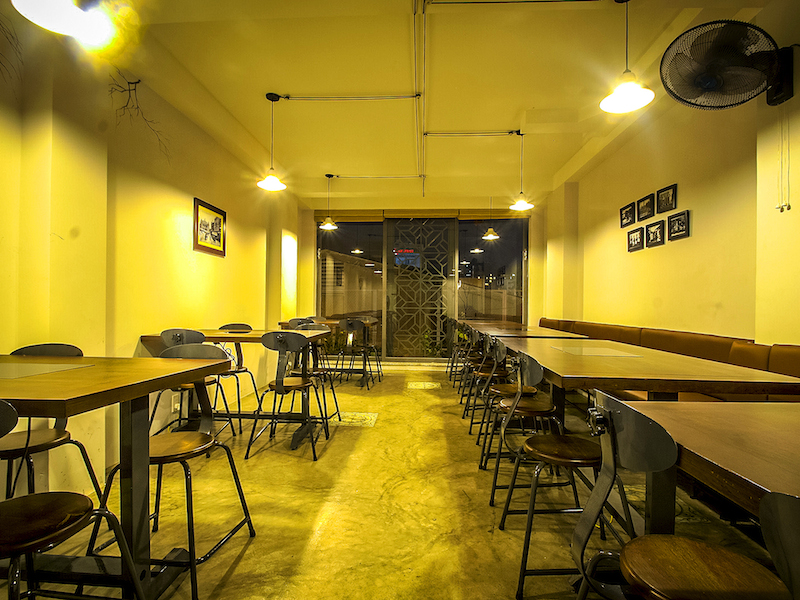 Lau Dam Bong’s menu isn’t divided into starters and mains per se, but is more like a collection of dishes you’d expect to find at a family feast in Vietnam’s North.

We start off light with Ca ro dong (VND79,000), a colorful salad of banana blossom, bean sprouts, julienned carrots and mint with a sweet and sour fish sauce dressing, topped with crispy fried perch. Sliced very thin, the fish is almost like a crackling, providing a wonderfully crunchy texture to the dish. 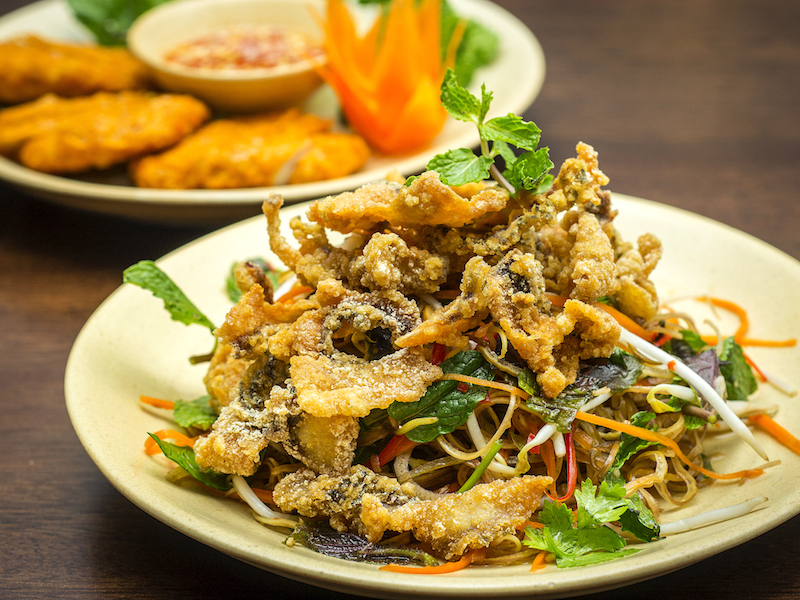 The Cha com (VND79,000) is another slice of Hanoi on a plate. Cốm, or green rice, is traditionally available only in autumn, with the rice harvest. It’s a labor-intensive process to soak, steam, and husk the grains before pounding them flat. Here, it’s mixed with very finely minced pork, lightly seasoned, then steamed and fried, almost like a sausage. You can still see the kernels of green rice in the sausage, providing moist, spongy bursts of flavor. 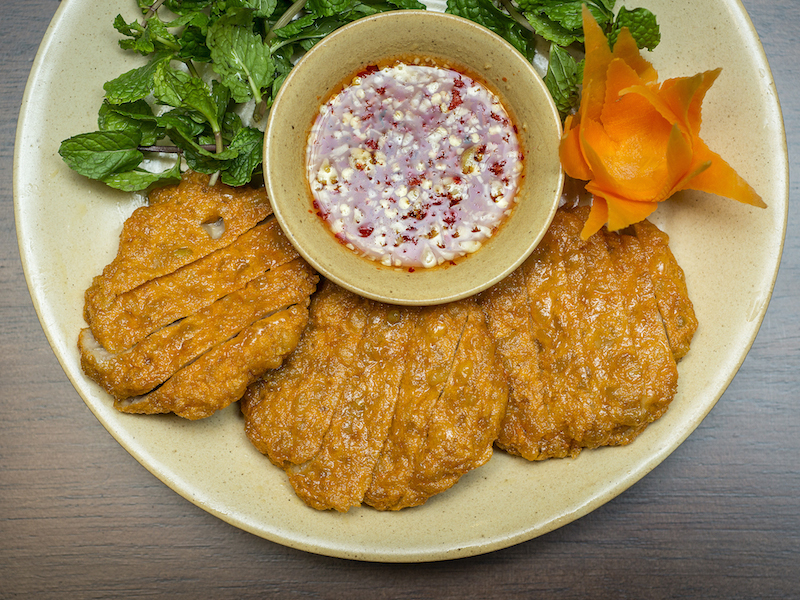 Moving on to Hai Phong, located at the mouth of the Cam River where it meets the East Sea, we sample the region’s specialty, Nem cua be (VND99,000). These fried spring rolls take on the square shape peculiar to Hai Phong, and are stuffed with minced pork, vermicelli noodles, bean sprouts, tree ear mushrooms, shrimp and crab. “Southern cuisine uses sate and chili whereas Northern cuisine uses less oil, less spices, to allow the ingredients to shine through,” says Binh. The excellent Nem Cua Be illustrates his point, bursting with chunks of crab and shrimp.

In a generous moment, Binh lets it slip that the rice paper is wetted with beer instead of water, which makes them turn a golden brown when frying without getting burnt. The dish is meant to be eaten as a handroll, filling a lettuce leaf with the spring roll, noodles and herbs before being dipped into tangy fish sauce. 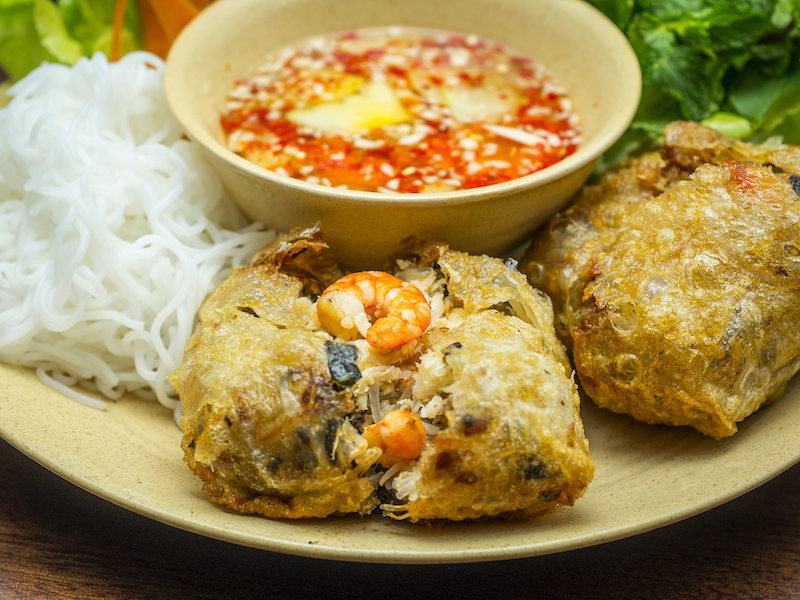 Another beautifully presented dish was the curiously named Vit nuong gia chon (VND120,000), “Roasted Duck Civet-style.” The Vietnamese word giả literally means “fake,” so this was duck made to taste like civet which in turn is a nicer way to say “dog.” Northerners are known for their penchant for dog meat, but here, Lau Dam Bong prepares the chargrilled duck with the same seasoning and presentation of its controversial cousin. Having never had dog meat before, I had to rely on my dining companions (who were coincidentally from Hanoi and Hai Phong) for their assessment. One bite and their eyes lit up, speaking to the authenticity of the flavors.

To the uninitiated, the duck was meaty, moist and well-seasoned with a hint of umami tartness from fermented rice (a seasoning distinctive to dog meat dishes), designed to complement the condiments: holy basil, raw, sliced lemongrass, and peppery slices of fresh ginger-like galangal, for a very bold, unexpected combination of flavors. Our night ended with Lau ga dam bong (VND249,000), the chicken hot pot dish after which the restaurant was named. 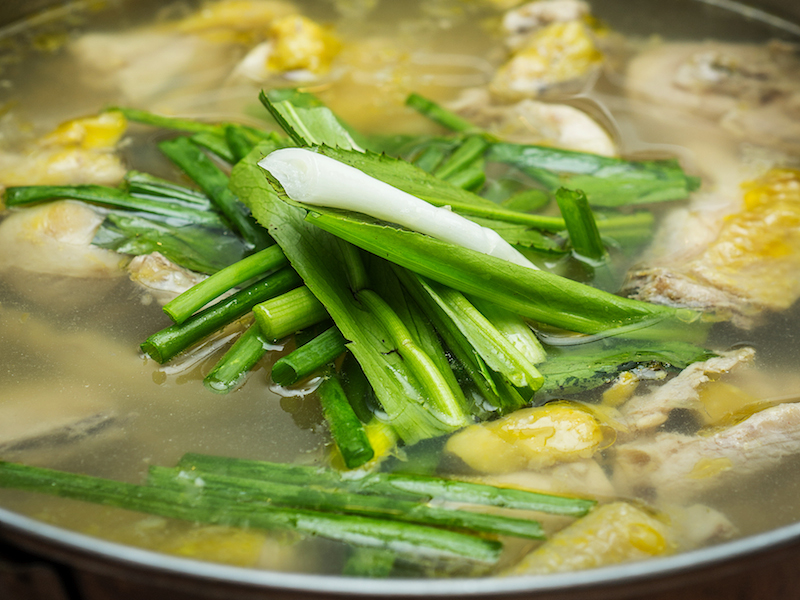 Dấm bỗng (the “d” is pronounced like a “z”) is a fermented liquid made from the same glutinous rice that’s used to make the very strong Vietnamese rice wine. Here it’s used to marinate the chicken which then goes into cold water, not stock, to make the dish. The result is a broth that’s at once sour from the fermented rice and sweet from the chicken, yet very light. There’s a plate of crunchy greens to throw into the hot pot and rice noodles to accompany. The dish is made to order, so once the broth is gone, there’s no asking for more.

There are only a few Vietnamese desserts on the menu (VND15,000 -VND25,000) but then again, people don’t come to Lau Dam Bong for the desserts. Even for those without food memories of Northern cuisine, the restaurant offers some very unique flavors not found in typical Saigon fare, using authentic Northern ingredients carefully prepared in a bright, upbeat setting.