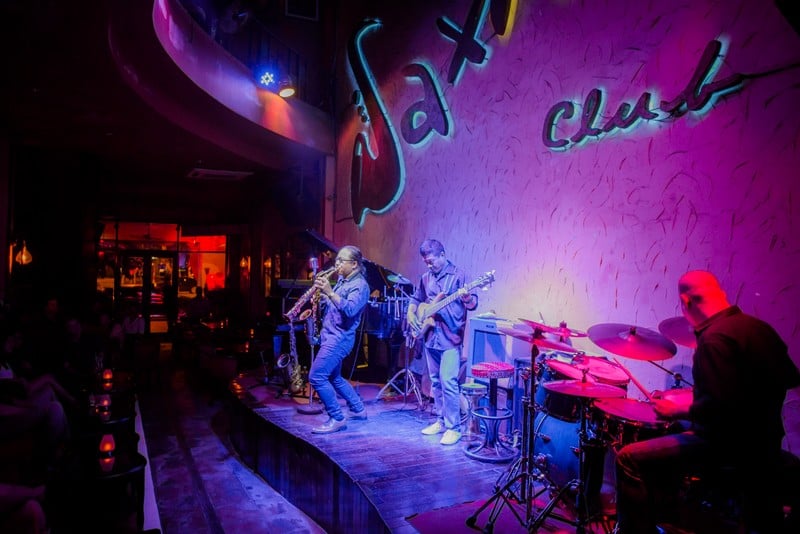 With sax player Tran Manh Tuan, you hear him before you see him

Walking up to Tran Manh Tuan’s villa in the morning after the rain, there are the unmistakable sounds of a saxophone going up and down the tonal scale. It’s a distinctly metropolitan wake up call. Now the tones escape his studio and spread out over koi ponds and broad palms, past drowsy Chihuahuas and through his front gate. If you live on this street, you get free concerts. The rest of us have his Sax N’ Art club on 28 Le Loi or can catch him in the Opera House or anywhere around Saigon he headlines with his big band.

“That’s a good sax!” Tuan tells his student, a classically-trained musician who also happens to teach saxophone. Tuan is not just a performer, recording artist, producer and composer, he also teaches music teachers. They come to learn how to play – as in, play around. They may know how to read music, to play scales and make their way through the standards – songs like Gershwin’s Summertime, but they are searching for the feel. “If you can’t play, if you can’t feel, you can’t have jazz,” he says.

Jazz was born in the churches and brothels of New Orleans after the American Civil War. Slave songs, Sunday choirs and surplus horns and drums from the battlefields came together in one of the most blended cities in America, in the most mixed breed of music. It evolved from the blues to swing and traveled through wars and peace to Europe before wandering into Asia on wax records on colonial steamers. Jazz moved easily, fast and loose and willing, and evolved constantly. Joyous, desolate, it encompasses all of life.

“If you asked me to play exactly what I played last night at the club, I couldn’t do it. Each night is different. I’m playing and I’m improvising – off the body language of the band and the audience. I’m reading the mood and responding, interpreting. We’re communicating back and forth with the audience in a universal language,” Tuan adds.

So how did jazz find a home in a place like Vietnam where traditional music isn’t about improvisation and personalization? Where traditional culture, with its Confucian ethos and Buddhist influences, has long valued obedience and subjugation of the self? In such a setting, jazz seems decadent, almost irreverent. 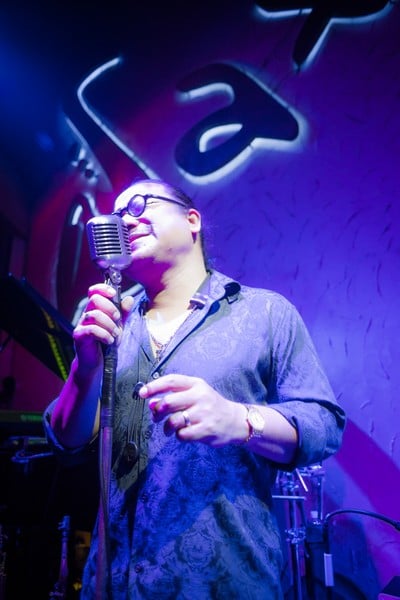 “I first heard a saxophone when I was eight years old. I remember it clearly. It was from a song by Trinh Cong Son, Vietnam’s number one composer. I had been playing in my parents’ cai luong (Vietnamese opera) group since I was five. I played the moonstring, Vietnam’s two-string guitar. I didn’t have a childhood, I had the moonstring. But I heard that sax and that was it. It was the range of sound that hooked me. I started playing the saxophone in restaurants, around the swimming pools of five-star hotels, with a band, whenever and wherever I could,” says Tuan.

The young kids were listening to Bon Jovi and boy bands. The older crowd were conservative and sticking with the classics. Jazz was nowhere. In 1989, a group from France called Oui, Oui, Oui came and played at the French language center. “We talked about jazz and when they went back they sent cassettes. I listened to those tapes over and over and to CDs that my friends brought from Eastern Europe. I loved it, learned as much as I could. The music had soul. It was personal, but at the same time, very open. And I was looking for a way to express myself. Jazz fit my persona and the saxophone fit my character.” 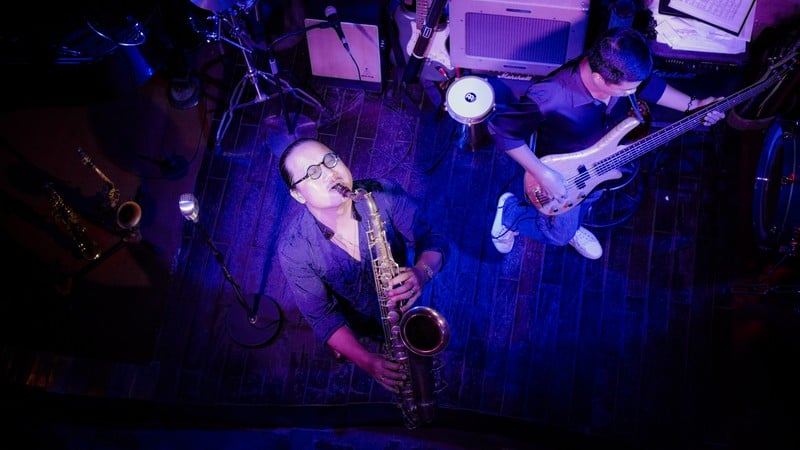 Build It And They Will Come

“It was obvious I had to build my audience,” Tuan adds. “I needed a place where I could go and play, so I decided to build a club and hire myself to play every night.” The interior of Tuan’s club is bathed in red and blue light. There are saxophones wired into the walls and large photos of musicians that include Sonny Rollins and Charlie Parker. This is no downtown dive. The musicians take the stage at 9pm – piano, sax, bass and drums. The set starts with a jazz standard and the sax holds the spotlight before handing it off to the piano player.

“I started the club 11 years ago,” says Tuan. “My friends all said I was crazy. They said, ‘Where’s your audience?’ Well, in the beginning, 99 percent of my audience was imported. It was expats and tourists. I needed to find a way to grow a local audience.”

By 10pm, when Tuan takes the stage, the club is full with a blend of Asian and Western tourists, expats and locals, age ranging from mid-20s to mid-60s. All eyes are on the musicians, the chit-chat is minimal. It’s definitely a club where you come to listen, and the product is class. “I figured out how to bring Vietnam to jazz. I had to build a bridge. I picked out the old folk music and rearranged the sound with soft jazz. I used traditional Vietnamese instruments and the instruments of the ethnic minorities. People could recognize the melody and sing along, but also be interested in where I would take it. They called it fusion and to many it is still what I am best known for, something familiar but new. If you only do things for the audience, then you are not a true artist, and you’ll have nothing at the end of the day. But you also have to be careful not to push too hard or they will go away. I made this bridge and they said it was trailblazing. I put these songs on my second CD and it was a huge hit. It’s still my best selling CD.” 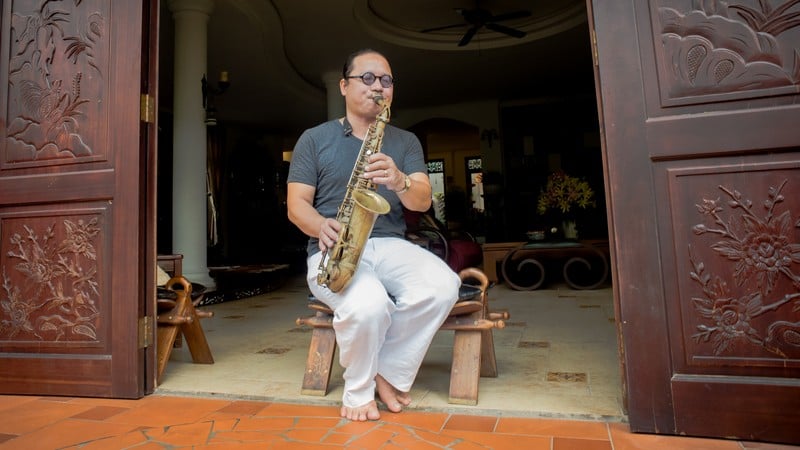 Tuan breaks out the bamboo instruments on his second song, which seems to start in the northern forests before turning abruptly into the city when he picks up his sax. By the end of the song, we’re closer to Harlem than Ha Giang. Throughout the remainder of his set, Tuan is constantly playing different instruments: the tenor, alto and soprano sax, electric guitar, drum, cymbal, a flute modeled after the Armenian duduk, and unique ethnic minority instruments. One looks like three pipes coming out of a gourd, another a bit like the pan flute. When he plays them, you can see why his brand of Vietnamese fusion has caught on: they give you a true sense of place without any trappings of nostalgia. You won’t get this anywhere else from anyone else and the audience, regardless of their knowledge of jazz, seems to recognize they are getting something rare, something real.

“Day by day, the audience’s knowledge is getting better. Technology is a big part of it, with easier access to all types of music. People are exploring more musically. And I see the result in my club. More Vietnamese are coming, they’re younger and they’re coming with more understanding. Travel is another factor, both in terms of exploring outside Vietnam, and musicians coming here,” says Tuan. 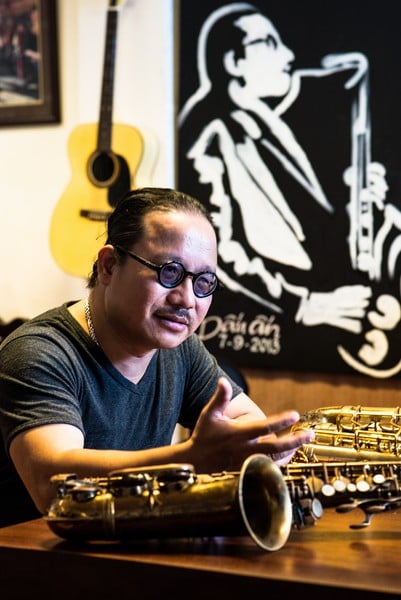 Adding: “I’ve traveled to over 50 countries with my music, and I’ve played with some of the greats here in Vietnam. What I am seeing is that jazz is now truly universal. You have African and Arab beats and melodies in French jazz, you have festivals in places like Chiang Mai with musicians from Myanmar, Laos all giving local color. I’ve played with monks chanting in the pagoda in Hue. It’s all very free now. Even when you play with the greats like Herbie Hancock or Derek Nash, they give you space to create your own way.”

Appropriate, therefore, that Tuan’s set ends with Fly Me To The Moon. It starts misty, matching Saigon’s weather, but the audience knows by now there’s going to be fireworks before the song is through. Tuan and his band take everyone for a tour of sound, complete with him playing the soprano and alto sax together at the same time, music coming from both sides of his mouth in a frenzied Latin samba chica chica. From Jupiter and Mars to Rio in one song. From Louisiana to Lao Cai in one evening.