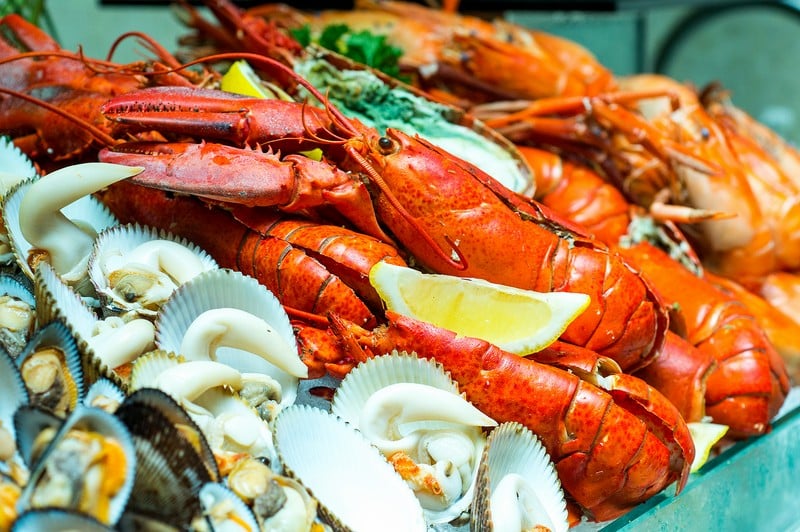 Le Meridien Saigon may be a newcomer to the city’s luxury accommodation category, but it hasn’t lost any time in making its mark on the local fine dining scene. The hotel is home to a number of distinct venues, each a variation on the modern design-focused chic that the brand is known for worldwide. In the case of Latest Recipe (Mezzanine, Le Méridien Saigon, 3C Ton Duc Thang, D1), a classic contemporary dining area nestled comfortably on one of the lower levels of the hotel just up from the lobby, guests can expect a refreshingly spacious restaurant floor with an elegant international design and a cuisine to match. With the bright graces of the décor – breezy and angular with a broad, open kitchen area – and a calming view over the river just across from the hotel front, the venue is ideally pitched as an inspiring spot for fashionable dining, and it’s a perfect showcase for the virtuosity of the hotel’s cheffing staff. 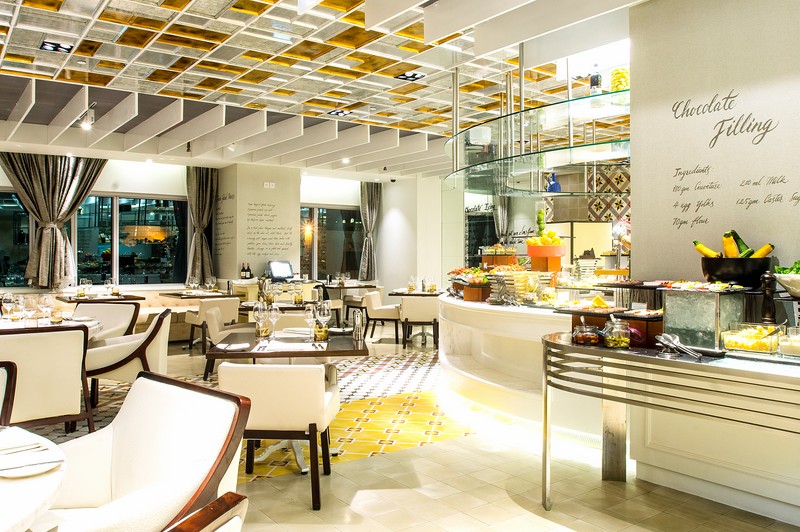 Our visit to Latest Recipe coincided with the presentation of one of the hotel’s ambitious new buffet concepts, and F&B Director Robert Conte was on hand to elaborate on the culinary trend that has inspired the bold choice of menu. You may or may not be familiar with ‘surf & turf’ – outside of North America, the term generally refers to any dish or meal that serves both meat and seafood. Pure American-style surf & turf, however, really implies a pairing of the ultimate in both categories: beef and lobster. 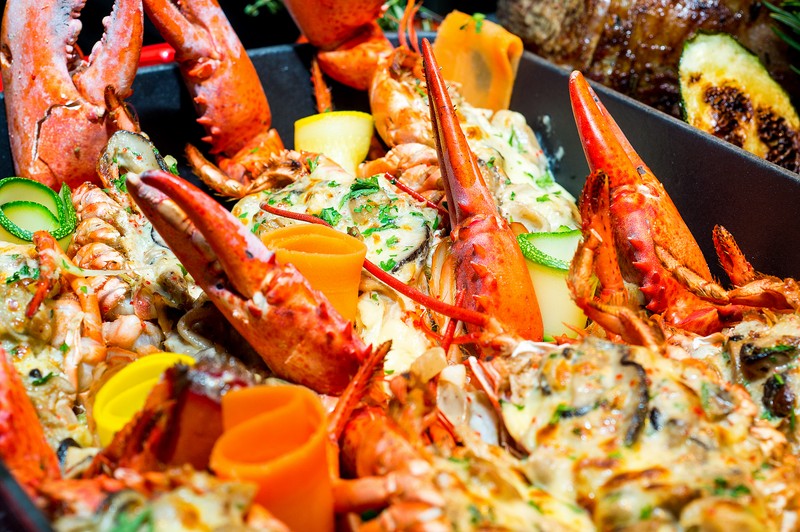 It’s hard to make a real statement in the buffet category in this town, but if the idea is to latch on to a combination that will be popularly received by both local and international clientele, then Le Méridien Saigon is onto a winner. Building on a premium surf & turf concept, Latest Recipe is now serving a full surf & turf buffet almost entirely based on beef and lobster dishes. Beginning last month and now extending into December, from 6pm to 10pm on Friday and Saturday nights diners at the venue can select at their leisure from a range of delicacies based on the finest imported ingredients in the category.

“For the beef part of it, what we have here is prime rib,” says Robert, proudly showing off an enormous rack of beef that looks like it came straight out of The Flintstones. “In terms of preference, I feel that with people and steak, it’s very personal. But this is simply one of the best cuts you can get. It’s prime rib – kind of the best of the best.” 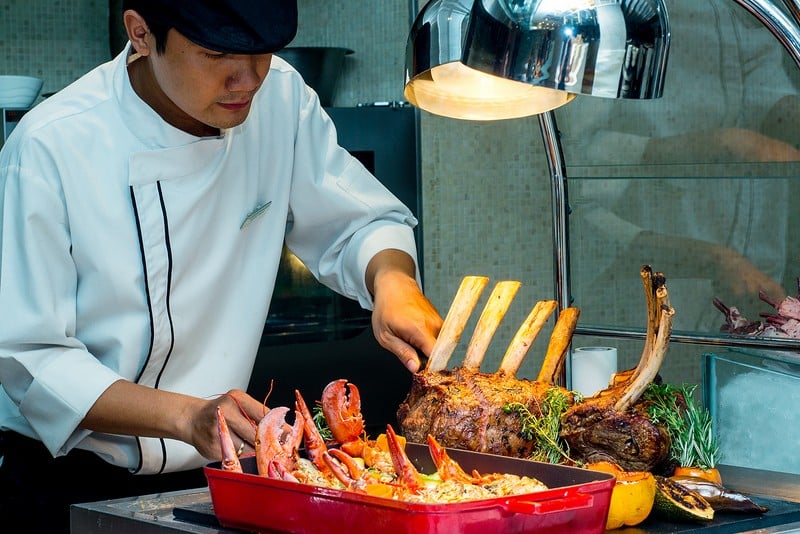 The restaurant’s use of choice Australian beef over the local carabeef is easily understandable, but Robert is particularly enthusiastic about the decision to use Canadian lobster for the surf menu items. “It’s actually because of where the lobster comes from,” he explains. “It comes from the Atlantic, which has much colder water than what we have here in Asia, so the meat tends to be a little bit sweeter – so that’s why it’s really good. What we do is, we’ve got it whole, we’ve got it baked, stuffed, poached – and you can ask for it to be done in any way.” 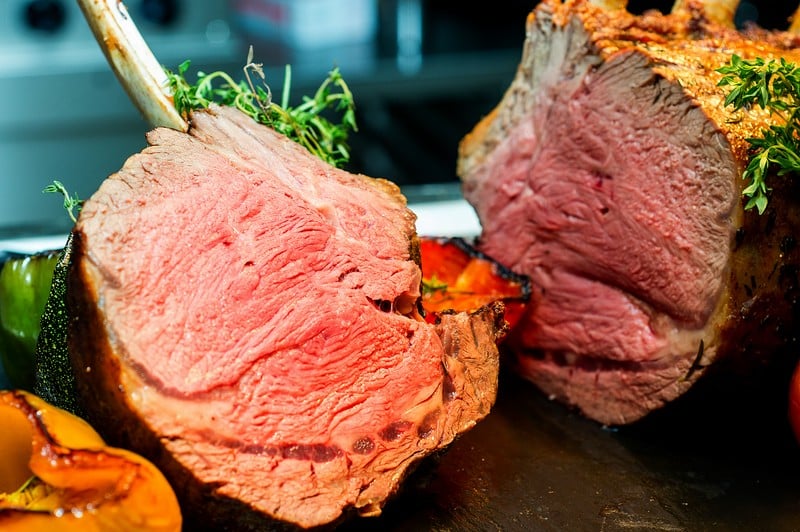 We enter into our exploration of the buffet with a plate of fresh French oysters from off of the ice rack – with a full, salty flavor unmatched by local varieties – as well as various other shellfish items, lightly fried in the Vietnamese style on request by kitchen staff on hand. The buffet has a fine selection of sushi also, but we only lightly dabble in the ginger & wasabi fare before moving on quickly to the main attraction – the Australian prime rib of beef, still juicy & bloody after a six-hour roast, sided with a fine lobster thermidor, full stuffed half-lobsters in the French style. Land does meet sea in the sense that both meats are tender and moist, although what makes the pairing work is the contrast between the umami of the beef and the rich creaminess and fragrance of the lobster. We find ourselves tending towards the latter, as the beef is quickly filling; we sample a variety of dishes involving lobster meat, including a fine salad, and we succumb to the temptations of the baked oysters with bacon and cheese. A number of other buffet standards are available, with pizza, a selection of breads and cheeses, and an unusually complete desserts counter with a full chest of ice cream and an irresistible chocolate fondue. 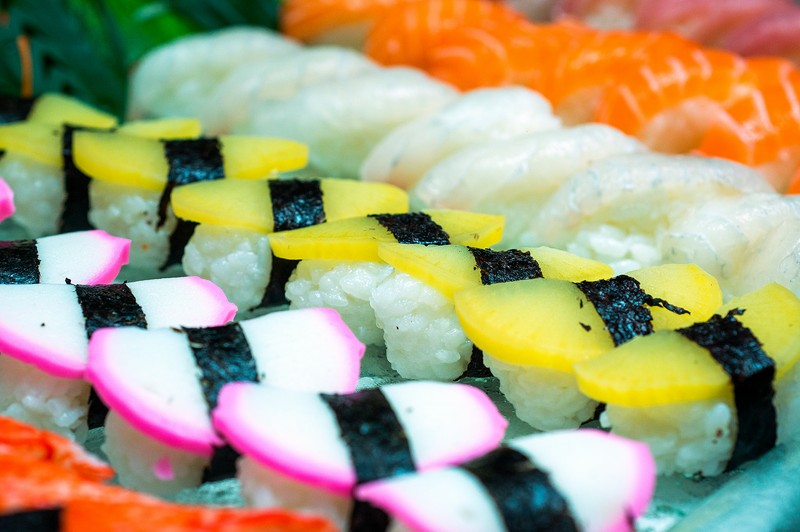 The buffet category in general is a popular but rarely impressive class in fine dining – Latest Recipe’s innovative take is a standout of its kind, and comes highly recommended for bringing something unique to the play. Do check it out this month, as the concept may run its course before the year’s out – but in any case, keep an eye on this venue for further challenges to the norms of buffet dining; in terms of creativity, it’s unlikely that this place is running out of ideas any time soon. 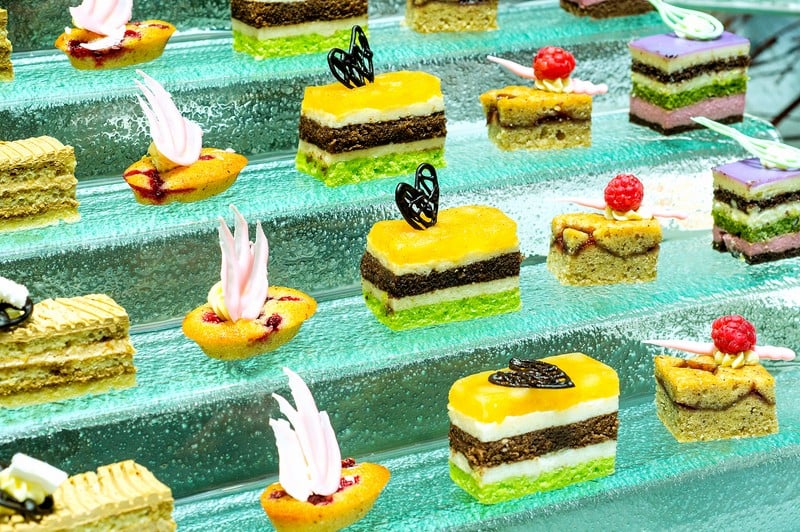 The Surf & Turf buffet night (only Fridays and Saturdays) is priced at VND1,290,000++ per person including free flow wine and soft drinks. To make a reservation, call 6263 6688 or email [email protected]