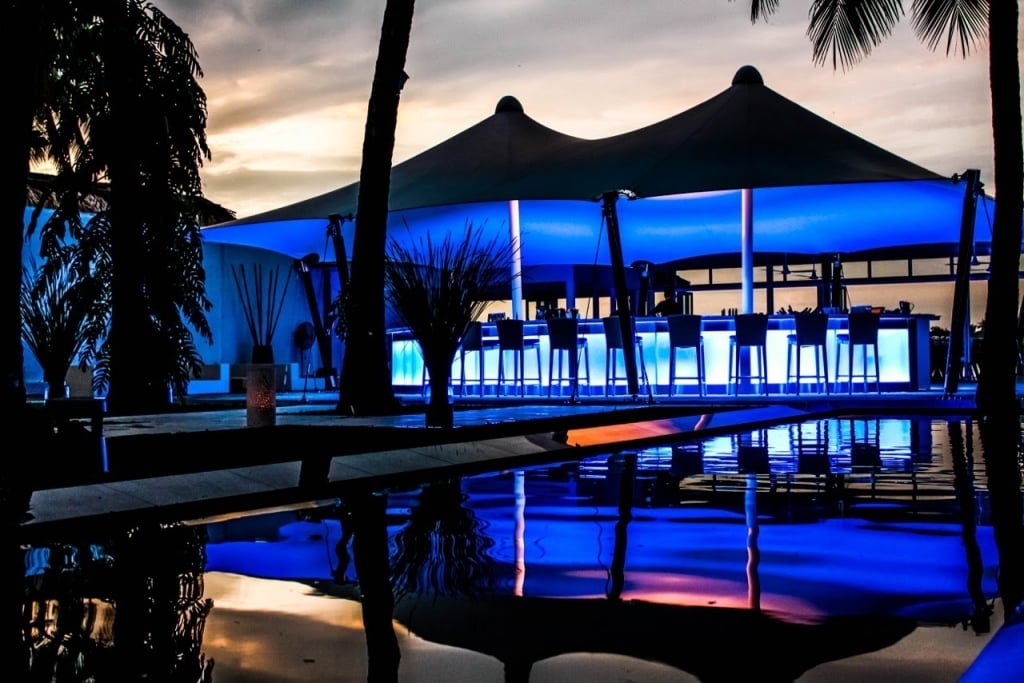 When The Deck (38 Nguyen U Di, D2) opened in 2008, a glitzier sister to Thao Dien’s cozy Mekong Merchant, it quickly evolved into a Saigon institution. The Deck represented everything good about comfortable living in Saigon – river breezes, a taste of home, reliably good service and lazily expansive views, all wrapped up in a beach house chic vibe. Against the backdrop of the occasional well-heeled diners arriving by private boat, every Deck outing promised to be a exercise in escapism.

The Deck was one of those rare restaurants that drew reliably steady crowds every night of the week, enjoying a golden ratio of wealthy Vietnamese and comfortable expats with a smattering of tourists who were inclined to make the trek out to Thao Dien. 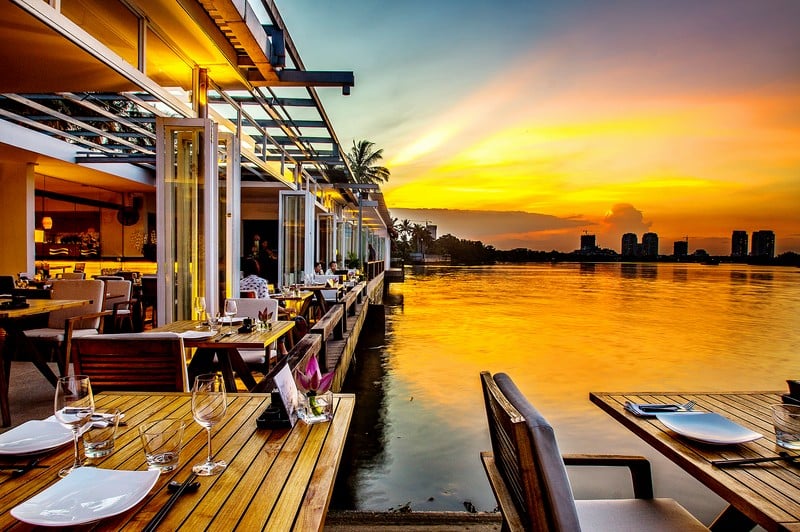 Despite its obvious success, The Deck is out to reinvent itself with its newest addition of The Deck Bar. Set on an adjoining plot of land, The Deck Bar effectively doubles the size of the restaurant anchored by a large oval bar under tented cover for a hip, futuristic vibe. “In D2, everyone goes to D1 for a good night out. You don’t want to leave, but you do,” notes Geoffrey Deschamps, The Deck Saigon restaurant manager. “We were known for our river views, but there was no place to sit by the river and have a drink. Now you don’t have to leave D2 to go out to a nice bar,” he says of the large space housing Zen water features, minimalist décor and seating for up to 150 at long tables and oversized sofas in the lounge area (or accommodating up to 300 for cocktail receptions). Still in its soft opening period, The Deck Bar has already hosted a wedding, corporate functions and private parties.

On a recent Tuesday evening, over a sweet Deck Delight (vodka, lychee, watermelon, raspberry, lime and lemongrass) and a refreshingly sour Sea Breeze (vodka, grapefruit, cranberry, lime juice, both VND195,000) the vibe at The Deck Bar definitely felt familiar yet different. “We’re a dining experience now,” says recently hired General Manager Albert Van Der Westhuizen. “The guest journey has changed. When you arrive, you’re brought through The Deck Bar where guests either have a welcome drink or go straight through to The Deck if their table is ready. We’ve seen guests come an hour before their reservation just to hang out. The journey ends with après-dinner drinks back at The Deck Bar. We’re a complete destination now.”

Bringing on Van Der Westhuizen, with his experience in the luxury yachting industry as well as over 10 years working in London hospitality, is a sure sign that The Deck is not satisfied to rest on its laurels. Regulars should brace for a sleeker, more sophisticated overall Deck experience, starting with a revamped website and a more focused menu, moving away from the fusion catch-all that saw pastas in heavy cream sauces sharing space with mashed potatoes and curried lentils. While many of the signature favorites remain, the dinner menu especially gravitates towards contemporary Pan Asian cuisine, with many dishes designed to be shared. 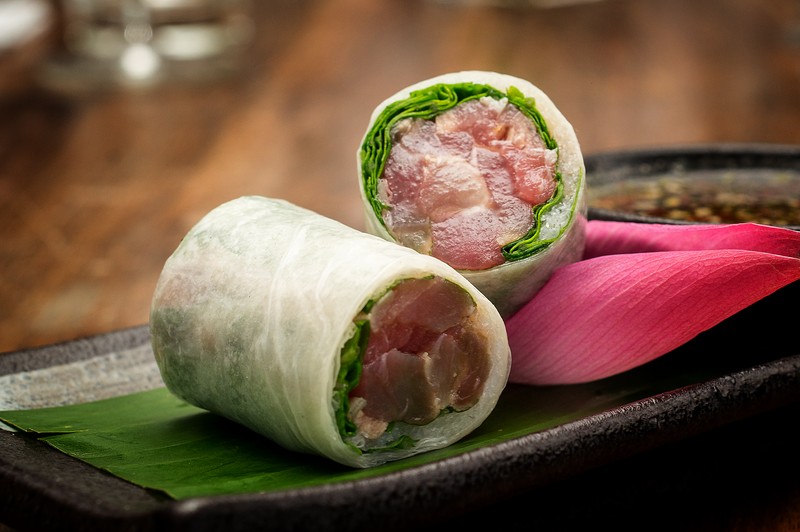 On the (Hot) Rocks

To experience the new concept, we opted for the “Lang Man” tasting menu (the least expensive of three at VND995,000 per person with table minimums; all dishes also available a la carte) that started out with a complimentary hors d’oeuvre of warm rice crackers with a tuna mousse and spicy sambal, followed by five appetizers and two mains. Marinated Tuna Spring Rolls supplied a light opening to the meal ― delicately raw tuna rolled in rice paper with a thin layer of bean thread. With a few herbs, the lightly marinated tuna was fresh and barely needed the thick nuoc mam dipping sauce. 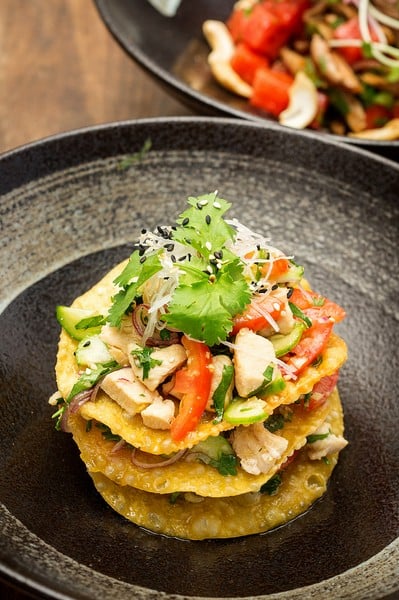 The Spicy Chicken Salad on Crispy Wonton was elegant in its simplicity, working as a tapas-sized explosion of crispy tostada- like wonton skin, topped with a crunchy salad of cucumber, tomatoes, shallots and chicken with a pop of flavor coming from the Thai-style tangy vinaigrette dressing and toasted black sesame seeds. 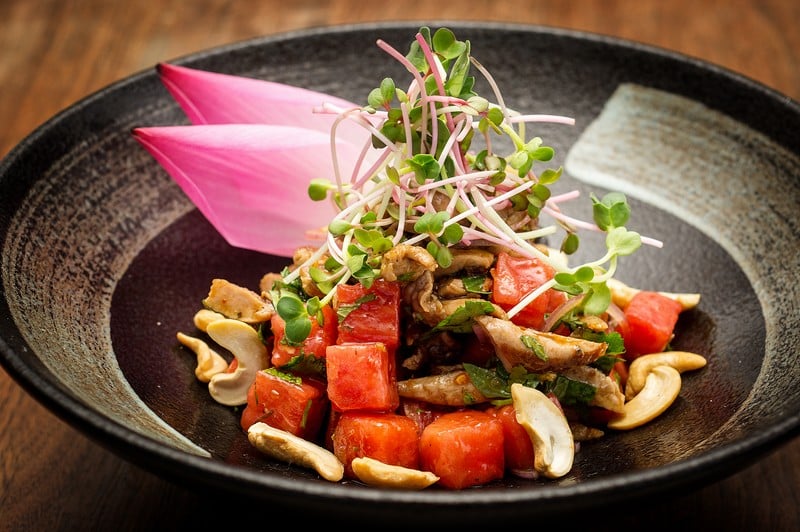 The Roast Duck with Watermelon and Cashew Nuts Salad was the ideal complement for the salubrious location. The sweetness of the watermelon, the earthiness of the cashews, the meatiness of the duck and the freshness of the cilantro with a sprinkling of cress sprouts made for a light, healthy dish with a peppery kick. 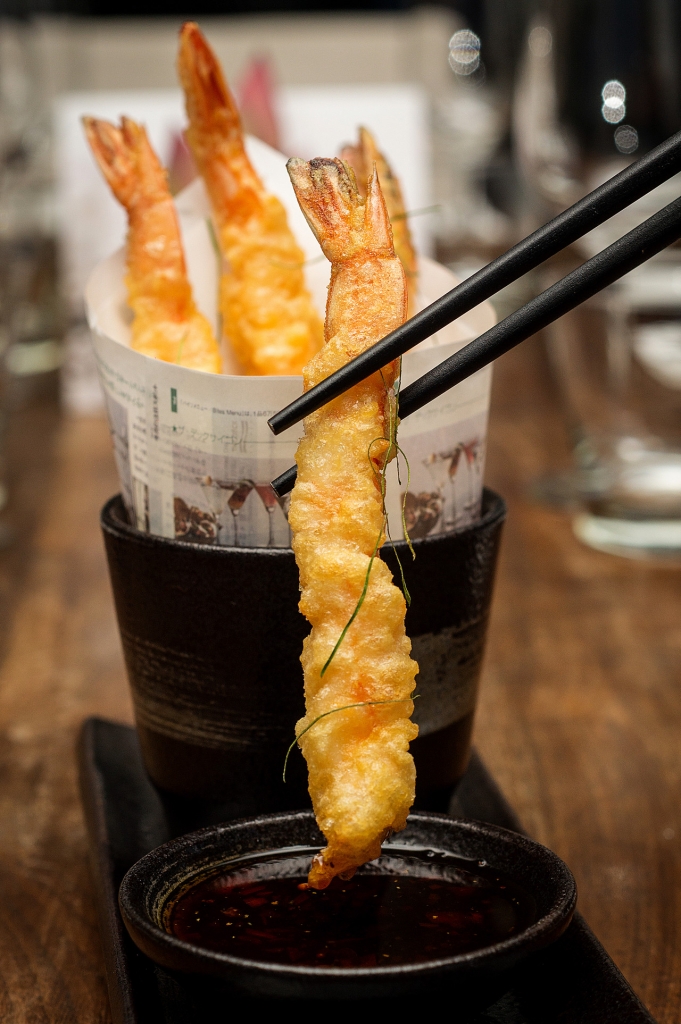 The Shrimp Tempura was as light and sweet as you’d expect, but slivers of lime leaves and a tangy tamarind sauce added unexpected bursts of flavor. While all the appetizers were outstanding, we found the Chicken Foie Gras Siu Mai the best example of The Deck’s new Pan Asian concept, stripped down and refined with a surprising twist. While looking much like its dim sum staple cousin, the steamed minced chicken with a shiitake mushroom filling served with a side of teriyaki sauce was a wow dish both in texture and taste largely due to the morsel of foie gras in the center. 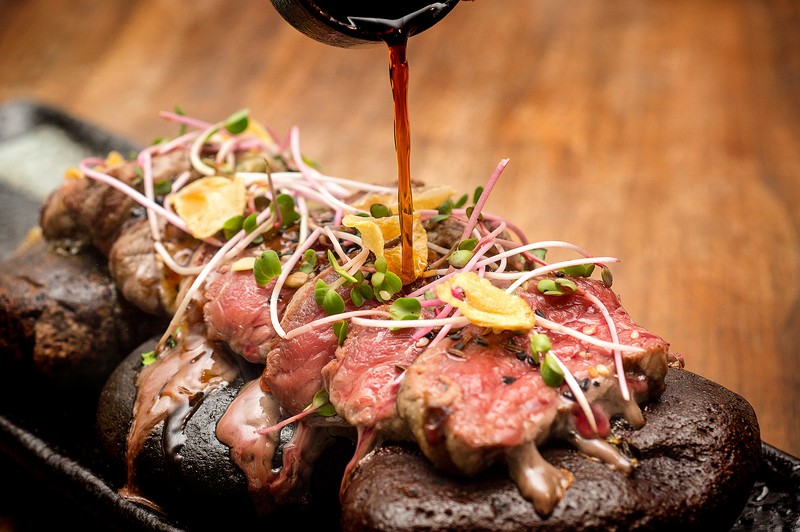 The Sirloin on Hot Rocks remains a reliably great Deck signature dish, benefiting from equal parts presentation and flavor. Slices of tender sirloin come sizzling on hot rocks, allowing diners to either enjoy it rare immediately or allow it to cook. Topped with crispy garlic chips, expect a Pavlovian response to the heavenly aroma wafting from the dish as it cooks. The Caramelised Norwegian Salmon might have been the most “Vietnamese” of all the dishes we tried, with a sweet caramel glaze over a bed of sautéed bean sprouts and chives, a nice introduction to upgraded local fare.

If you haven’t been to The Deck in the last few months, you’re in for a treat. While we hear the kitchen keeps a stash of Béarnaise sauce for those who simply can’t let it go, most others will enjoy the sleeker, more focused tweaks to the menu, its first in six years. Welcome to the new and improved Deck destination.