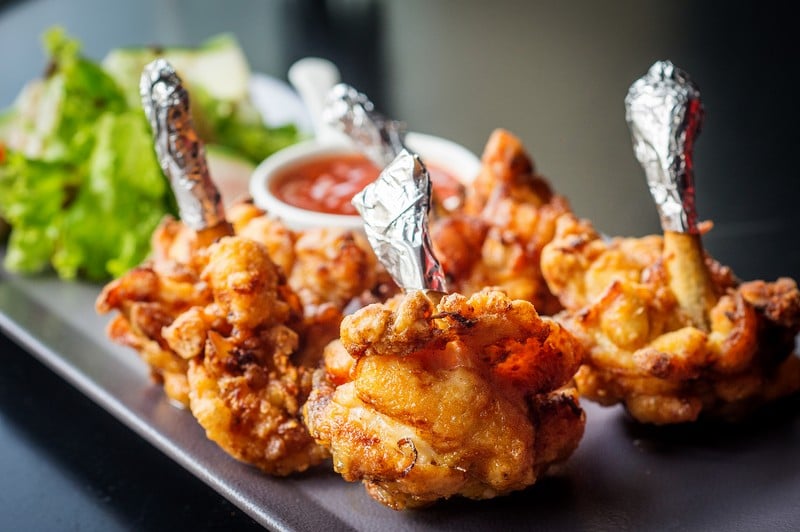 The first leaf of Elixir’s (146-148 Pasteur, D1) menu teases with a somewhat enigmatic definition of the venue’s name: “A magical or medicinal potion guaranteed to induce love.” It’s the first indication that there’s more to this restaurant concept than might first meet the eye as you enter the rather dramatically-styled doorway on the Pasteur side of the Rex Hotel, where Elixir has appeared out of nowhere — occupying a heritage building space that has stood disused for a very long time. Its deliberately understated soft opening has only served to add to its intrigue; where there was nothing, now stands a fashionable black and scarlet chamber promising of fine potions — the best in new-wave cocktails — and haute cuisine, all decked out in plush seating and the kind of subtle lighting that feels like it isn’t there. If Elixir is something magical, then a stay within its walls will guarantee a heightening of the mood that may well indeed lead to a pleasure not unlike falling in love. 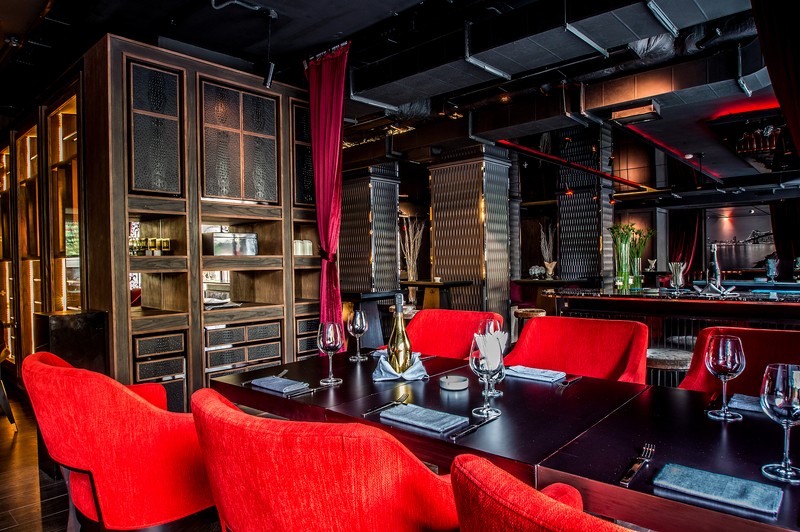 The essence of Elixir lies in the way it plays on the tension between polar opposites. Styled after the 90s era working-class British gastropub (or more appropriately, gastrolounge), Elixir is a like a big-budget reboot of the classic restaurant-in-a-bar, with distinctly purposed spaces blending into each other across the venue. While a heady cigar lounge occupies the far right, the central area features a modern bar and an array of couches and tapas tables, giving over to a fine-dining area to the left that seats less than 20 patrons. The vibe is classic modern, but the decor is unmistakably Indochinese; the dark polished woods, the French drapes, the cigar drawers like an oriental medicines cabinet.

Elixir’s design allows it to serve multiple functions, but it shines as a high-class restaurant. While its menu is not extensive, it is tightly-focused on a range of dishes unified by their dazzling plating and distinctive flavors. Nothing served is purely decorative; every element is purposeful. Where there is an olive or a disc of pâté, it is the best olive and the richest meat. The servings are an exercise in making a striking impression, with pride of place given over to exotic appetizers and specialty steaks – take a heavy tomahawk rib or a thick cut of kurobuta pork if you want to be especially inspired. We begin by toying with the cocktail menu (all specialty cocktails are priced at VND180,000), hand-crafted for this venue by a world-class Diageo judge out of Singapore, and featuring the latest in mixology fashions such as chili infusion and dissolved smoke. The Asian whisky sour served in a champagne flute, which stands as the venue’s signature drink, is nicely tart — although it has some fairly stiff competition in the chili mango margarita with its half slice of fresh cube-cut mango resting enticingly on the spicy liquor. 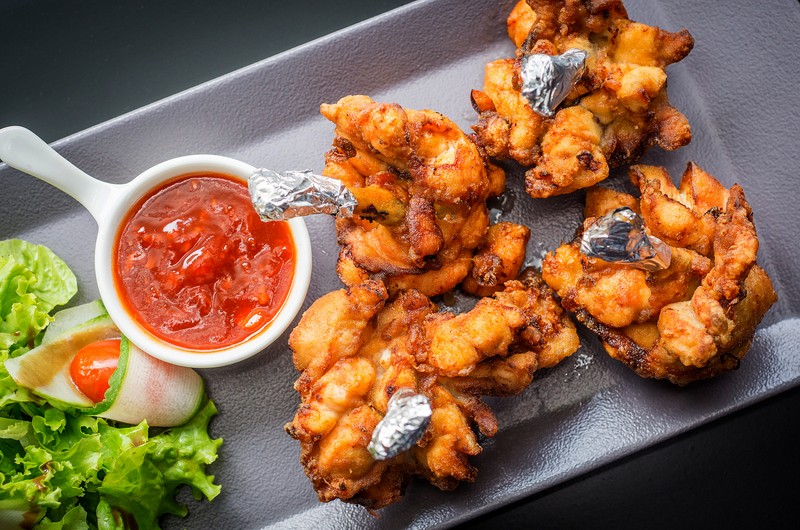 The appetizer/tapas selections come in generous portions, making them satisfying enough to serve in sharing plates of two or three as a light meal in themselves. We start with the sriracha chicken tulips (wings with the meat tucked to one end, VND160,000) which arrive with an invigorating Thai chili sauce made with ginger, lemongrass, and plenty of honey. 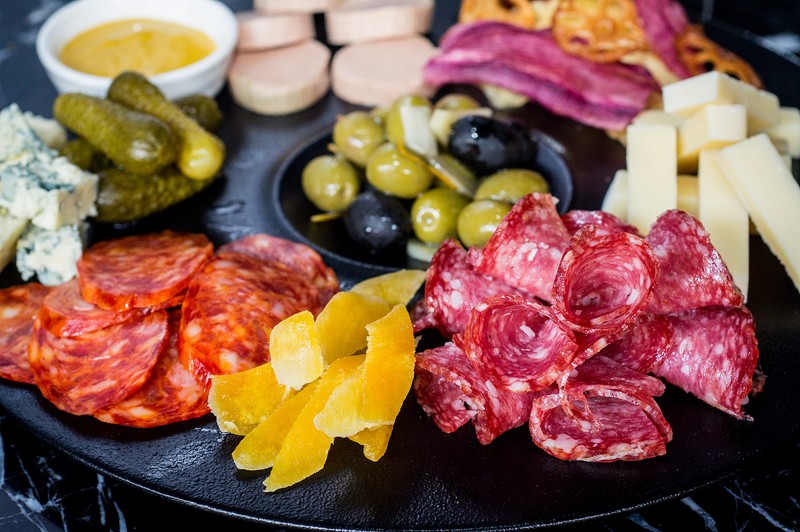 This is balanced by a charcuterie board of cheese, gherkin and salami (VND260,000) served with a smooth mustard and crisp slices of cracker baguette. It’s a dish that has been put together with great care for the quality of every ingredient — but it is swiftly overshadowed by what is easily the most visually impressive dish of the night, the pan-fried foie gras served on thick pineapple rounds and a palette of juicy berries and diced mango — resembling an upturned mocktail carefully smoothed out onto the surface of the plate. 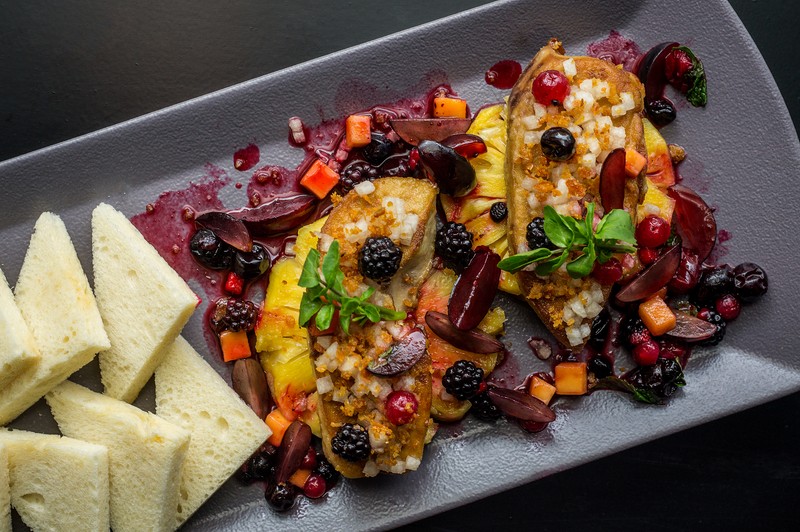 The foie gras is lightly fried to give it a crisp shell; the tropical fruit infuses itself into the meat with every bite, a tapestry of contrasts on the tongue and a uniquely challenging gourmet item.

Casual diners will find the above sufficient if they’ve come for the bar atmosphere and seat themselves in the central area; in the fine dining quarter, we move on to mains – selecting a pan fried salmon with mashed potato (VND460,000) and an irresistible grilled tenderloin beef (VND750,000) with red wine sauce. Both steaks are heavy and appetizing – whereas other five-star joints may sacrifice quantity for panache, Elixir is generous with its portions and delivers a working man’s meal true to its gastropub roots. This is not to say that the panache isn’t there, however — presentation is finely-crafted and as impressive as befits its prestigious location.

Elixir is a curiosity. Not many venues can get away with being all things to all people, but this one manifests a tasteful balance that works. Come well-dressed and prepared to suit your purpose — whether it be to unwind at the bar over a Hoegaarden draft, to enjoy the bracing atmosphere of the DJ sets on Friday and Saturday nights, or to take a fashionable position on the cigar lounge couch. Be sure to make this a preferred dinner venue while you’re at it — meals here are spectacular, and like the cocktails, they may have a transformative effect. An alternative definition for ‘elixir’ inscribed on the menu is “a preparation that is supposedly able to change metals into gold;” and given the atmosphere of this fine venue, that sounds about right. 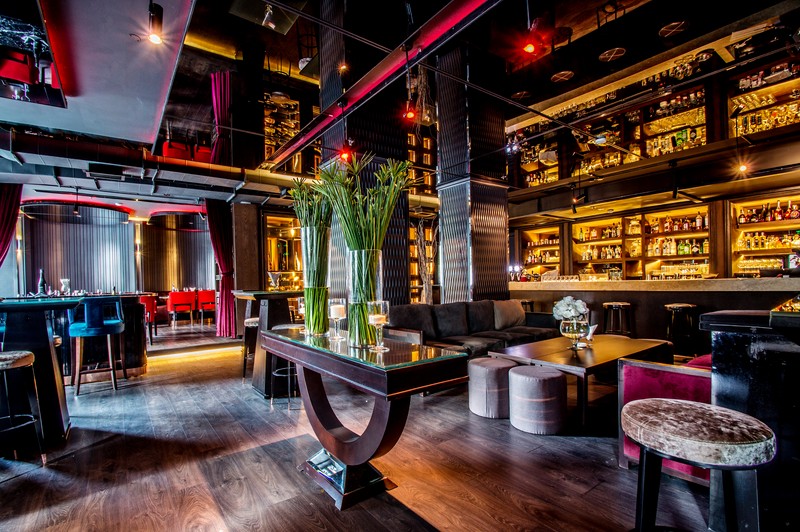