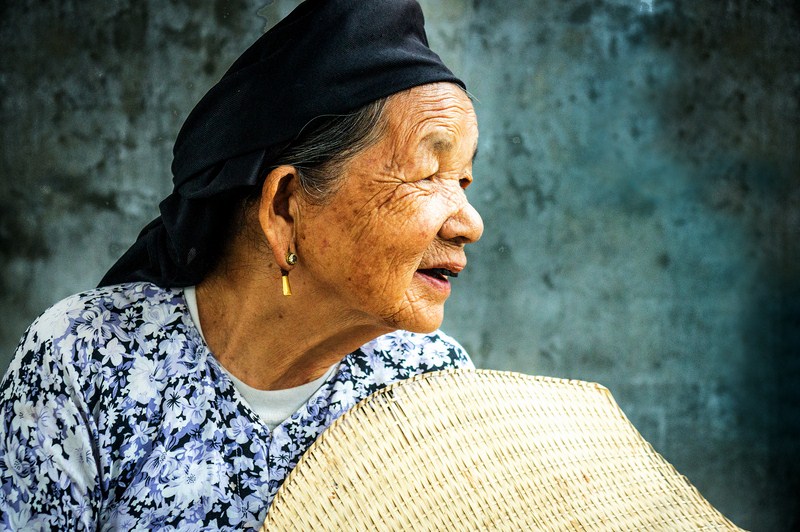 Remembering a bygone time when black lacquered teeth were in vogue

It was 1932 and Nguyen Thi Phu was not going to wait any longer. She and her cousins had all discussed it, and they were all going to do it together. They were old enough—the youngest was 10, the oldest 13—and the three of them were ready and willing. They left their homes in the silk-making village of Duong Lieu that sits 24 kilometers west of Hanoi and went to the man who had what they needed. A small, dull orange seed, unexceptional to look at—similar to a cabbage seed—but containing all the natural magic they longed for. They came home from the medicine shop, ground the seed into a powder, added a bit of water, and placed the powder on strips of banana leaf. Everything was ready; all they needed now was for evening to come so they could begin. For the three girls, it was just hurry up and wait. They couldn’t start any earlier; the magic had to happen while they were sleeping.

1932 was bleak. The Nazi Party had just won the majority vote in the Reichstag, the US was thick in an economic depression that had 25 percent of the workforce unemployed, Britain, sensing the waning of its empire, had just jailed Mahatma Gandhi, and Russia was suffering severe famine. Vietnam was still Indochina, but the embers of revolution were beginning to glow despite harsh repressive measures. It was not easy anywhere in the world, and it was going to get worse, but even in the heaviest of times there should always be time enough to put a shiny new smile on a 10-year-old’s face. 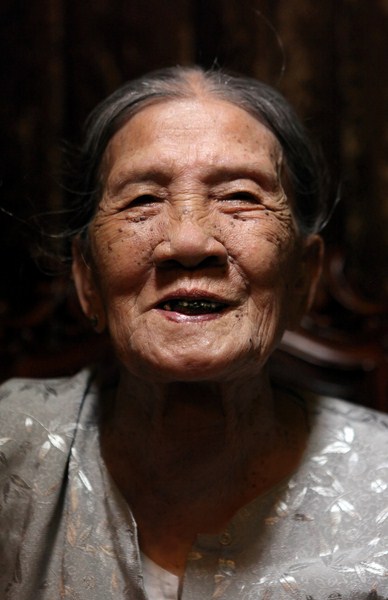 Nguyen Thi Phu is 94 now. Sharp as anything. A little hard of hearing and a touch slow in climbing the stairs, but if you spend most of your day sitting in an open storefront on a busy Saigon street, a touch of deafness could be a blessing. And how many of us expect to be climbing three flights of stairs every evening when we’re six years shy of a century? She sits back in a regal carved chair and takes us to a distant memory.

“I remember my mother showing me how to put the strip of banana leaf with the powder and water in my mouth and on my teeth so that it would not come off during the night. If it came off, I would have to do it over again. The water first had to be boiled and then allowed to cool to room temperature. Cold water would not work. My sister also helped press the leaf and the resin onto my teeth.” With that, she takes a broad leaf from a bouquet at her home and tears a strip about the width of a thumbnail and presses it on her lip to demonstrate. She will do this repeatedly during our conversation. “It takes three nights to work. After the first, your teeth are yellow. After the second, they are reddish-brown. And after the third, if you have done it correctly each night, your teeth should be black and shining beautifully!”

Nguyen takes off her prayer bead bracelet. The beads vary in color from amber to ebony, and she shows me with each bead what your teeth would look like if your leaf came out at different stages while you were sleeping. She also explains that if you wanted pitch-black teeth, you had to do it for five nights, but more than the desire of a color, she speaks of the allure of the shine. She comes back to the shine again and again as the sine qua non of the black teeth tradition. “I was so happy because when I peeled the leaf off my teeth that first morning and rinsed my mouth, I saw they were already shiny.”

But a 10-year-old may not have all her permanent teeth. “At 10, I just did the front teeth. I had to go back later and do the back when they were all in. Also, I started to chew betel at 15—some start at five (!)—and the betel slowly takes away the lacquer, so I had to do it all over again anyway.” 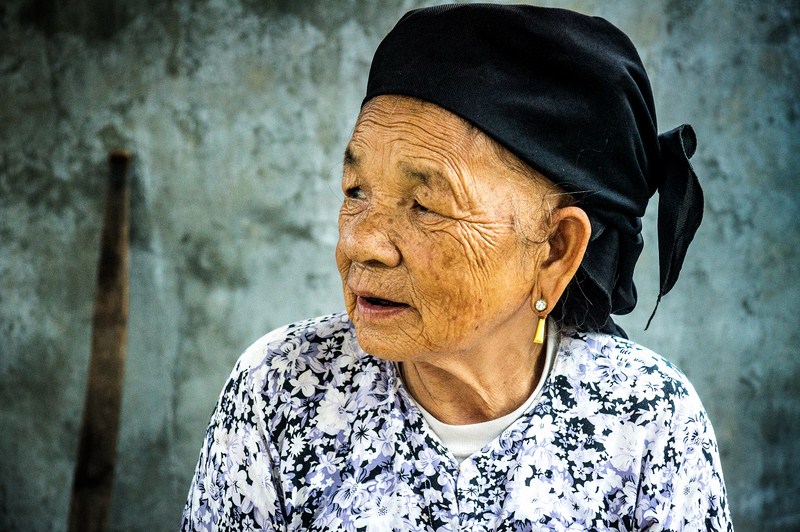 To the untrained eye, a betel chewer’s grin may look the same as a black lacquered. But betel stains the teeth and lips a dark red, whereas the lacquer does not affect the gums after the process is completed. Even better, the lacquer forms a bond over the enamel which helps protect the teeth from decay. Studies have confirmed that those with blackened teeth maintained their full set longer than those who abstained from the practice. But you don’t need to consult the studies when you are talking with Nguyen. She sums it up succinctly: “Black teeth are strong. White teeth rot!” Which is not to say that better hygiene was ever the sole motivation for the blackening. Various sources offer various reasons, all of which revolve around the idea that black was beautiful, and most revolve around the practice as a rite of passage to adulthood and hence being ready for marriage—this despite the preference for lacquering the permanent teeth as early as possible and before the enamel has fully hardened. Superstition is also cited, with the popular notions of evil spirits identified by their long white teeth and thus to be visually avoided.

“My whole village had black teeth. Men and women, but women were the leaders; men would blacken their teeth later—some men waited until they were 20 or so. But everyone did it. The only ones who had white teeth were the ones whose teeth were crooked because it was impossible to properly lacquer crooked teeth.” 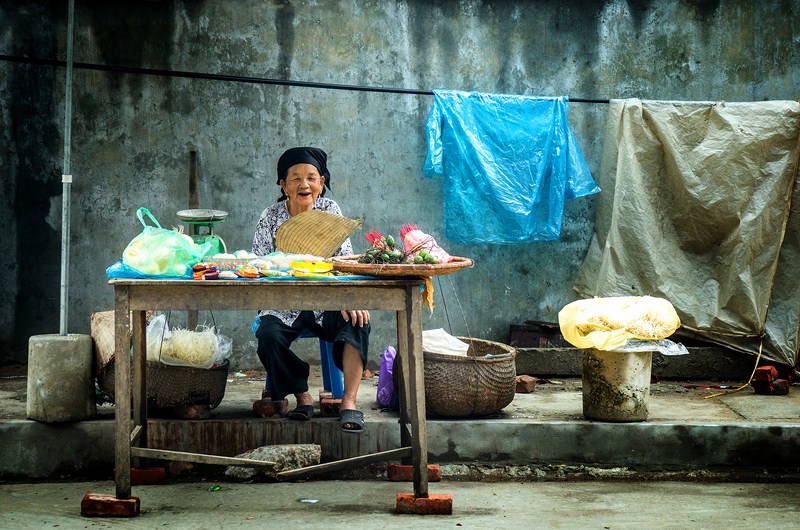 “When I was 13 my father found work in Hanoi and so he moved the family there. At the time, maybe 70 percent of the Vietnamese in Hanoi had black teeth.” Nguyen may not have been immediately aware, but even as she arrived in the capital of colonial Tonkin, the practice of lacquering one’s teeth was beginning to wane. It is not purely coincidental that the availability of the magic seed grew scarcer as the foreign populations arriving on Indochina’s soil grew larger. Advancements in infrastructure and transportation opened the floodgates: in 1936, a railway linking Saigon to Hanoi opened; three years later, travel between France and Saigon took only 30 days. This meant more and more foreigners disembarking in their white flannels flashing their white (or yellowed) teeth and their disdain for the locals’ mysterious black grins. “I remember seeing foreigners when I was 13 years old. They would ride their bicycles around Hanoi, looking very pompous. I also remember that by the time I was 17, it was very difficult in Hanoi to find the medicine to lacquer the teeth. I had my first child when I was 19, and by the time she was 10 years old, like I was when I first put the banana leaf on my teeth, the custom was all but finished.”

So it all goes, eventually. Nguyen takes her beaded bracelet back off the table, points to one of the darker (but not the darkest) beads, and says again how beautiful it was to have one’s teeth shining with that deep, rich luster. She puts the strip of torn leaf back near the bouquet, and after a while and a polite request, looks up at her granddaughter standing beside her and smiles.

For more articles in this series on beauty, click here.