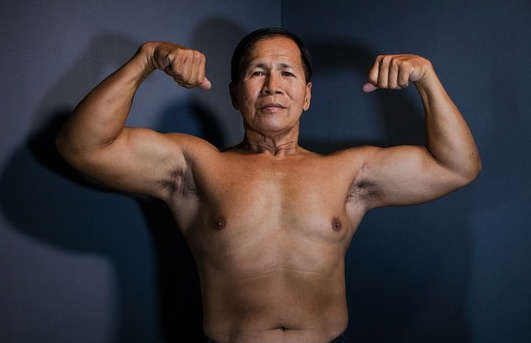 I am sitting on a bench press in a gym that looks more like a motorcycle repair shop. It’s all free weights and no nonsense, bare to the bone and it never was anything else nor did it ever try to be. It’s a little larger than a shipping container, dressed with weak lighting and yellowed, curled, torn posters no one has really looked at in years. Rickety fans push air to and fro without any noticeable relief. The bench I am on feels like a hand-made replacement, with about a thumbnail’s worth of padding packed into a solid surface after decades of deflation. The weights are well worn and spread on the matted floor like the spare change of Colossus. You don’t come here to ogle. You don’t come here in spandex or lycra or high-performance, moisture-wicking microfiber. You come here to use Mr. Phu’s tools to build up your own machine without distraction. You come here with the same loyalty of the pre-Vatican II churchgoer: give me that old-time religion, where I build my temple brick by brick. No shortcuts, no false prophets, no easy virtues. 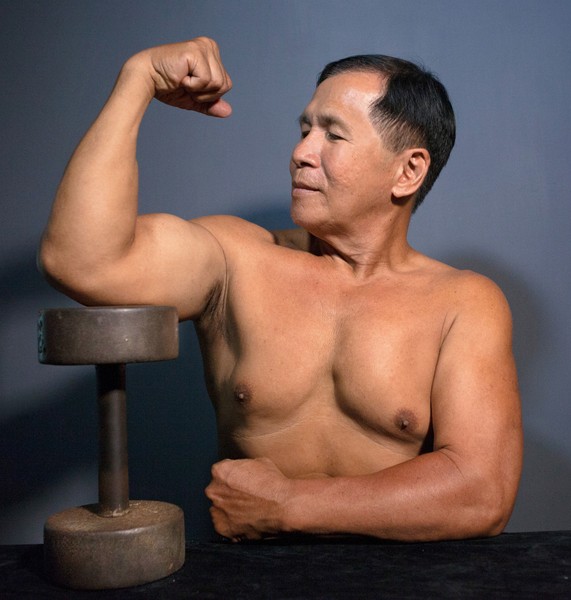 I am waiting to speak to Saigon’s original champion bodybuilder and owner of this gym, Mr. Phu Si Hue. He’s 63, solid as the citadel, and supplementing his income by giving order to the sea of motorbikes that come in every morning. I have arrived during the rush, so I only have time to give myself a two-minute tour of the facility. I recognize him in the faded photos, flexing with a group of friends around some local pool. They’ve all got Bruce Lee hair, biceps like frozen pheasants, pectorals like a Christmas ham. They’re all smiling for the camera with smiles that show that bodybuilding is not yet the money-making profession of movie stars; they’re smiling because it’s fun for them to be like this.

Mr. Phu is the clear champion in the group; he sticks out like a swollen thumb among fingers. From the photos, and from the notoriety of now famous bodybuilders, I expect Mr. Phu to have a personality as outgoing as his pecs. But he is a very shy, reserved man, with an easy smile, a gentle handshake, and a manner that hints of slight embarrassment from being the center of attention. His voice is quiet and he wears his frame with something between the nonchalance of a lifelong athlete and the humble manner of a modest tradesman. His answers are honest, even if they read prouder later on the page. Throughout the course of the conversation, I keep trying to determine if his building up of his body was a way to shield his shyness or to otherwise compensate for some insecurity. But by the end of the afternoon, I come away only with the conclusion that he is a man who found something that he liked early on, the way another finds music or aviation, and did not ask more of the world than to be able to do what he enjoys (not always an easy thing—especially in a country recovering from war). And it is clear he still enjoys it; he accepts without hesitation the request to pose like he had at the height of his success, and breaks out his competition costume and begins to flex without further ado. In short, Mr. Phu has lived with a simple formula for enjoying life from which it seems he has not thought to deviate, and has been rewarded with good health and quiet strength at an age when others are breaking down. Hats off to him and to others who serve as quiet examples of success on their own terms. 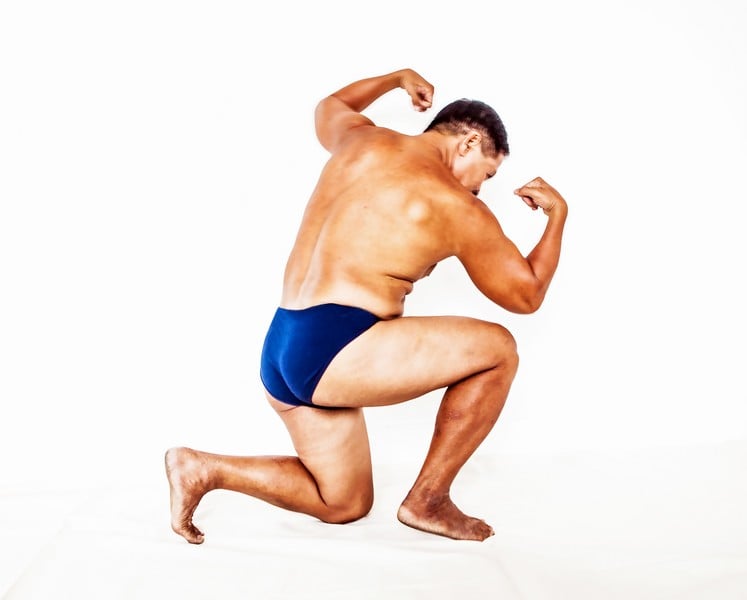 So what was your prize for being the champion in 1989?

A bowl of pho.

A t-shirt and a pair of shorts.

What kind of dedication did it take to win of a bowl of pho, a t-shirt, and a pair of shorts?

And what kind of a diet did it take to work out between five and eight hours a day?

Well, growing up, my family sold pho, so we ate well. But during the hard times after the war, it was a very simple diet—rice and sweet potatoes. Now I eat four meals a day: rice, fruit, meat and water. Maybe I drink a little Coke after dinner. But back then, competition or not, it was every day just cheap rice and sweet potatoes or cassava. I built up a strong stomach this way.

So your family used to sell pho, which is what you won when you were first crowned champion. Oh, the irony! But how did you manage to become champion on such a diet?

My advantage was that I had already built up muscle early. I had been in karate, played football, and run distance before high school. I had already been lifting weights for these sports, so I did not have to start at the beginning when I decided at twenty that I wanted to become a bodybuilder.

I just liked the people who were doing it. I liked to be around them and their crowd. It was a different time back then; we were all training together. I had talent, it was recognized, and so a teacher came from Cambodia and taught me special poses for the lats [latissimus dorsi; the broadest muscle up the trunk of the back] and the chest. But I then taught the bodybuilders I would compete against. I opened a gym in 1978 and taught whoever wanted to work out. I even taught the women that were interested in lifting weights and bodybuilding. Now, obviously, bodybuilding is a profession, so everyone trains separately and is far more competitive. But back then we all just came together because we all had the same interest; we all just enjoyed the sport. And we stayed friends even during the competitions. We are a smaller group now but we’re still friends.

How many competitions were there back then, and how many did you win?

Competitions were three times a year. I won from 1987 through 1990, so a twelve-time champion. I blew out my knee trying to lift 170 kilos and that was the end of my competing.

When and why did it change?

After 1990. There was more information, more photos coming in – even videos of bodybuilding competitions from all over. It was exciting to see all this, to get our hands on these materials. It was also the first time that bodybuilders were becoming stars; the first time we saw how famous Arnold Schwarzenegger was. So everything got more popular and in fact our gym got more popular; we began to attract a crowd. We were even asked to perform during national holidays and at government ceremonies. We’d wear long white pants and white t-shirts, not what we would wear at the competitions. In 1978, when I opened my gym, there were only three other gyms in Saigon, four total and one each in Districts 1, 5, 10 and 11. Membership cost VND800,000. But by 1990, it was becoming a different sport; it was becoming a global lifestyle, and gyms were a business.”

Nothing until around 2000. Steroids only come when the money comes into bodybuilding. Some tried steroids made in China because they were much cheaper but this was risky; there were allergies, bad reactions.

And now? How has life as 12-time champion treated you?

I have 70-80 members now at my gym, which I had to move five times since 1978. I’ve been on Nguyen Thi Minh Khai for six years now. I still work out as much as I can, but now I only work with 50 kilos instead of 130-170 when I was competing. I have three sons and four granddaughters and I go to my sister’s for lunch nearly every day. On weekends I go to church service with my wife. And I still have my health. 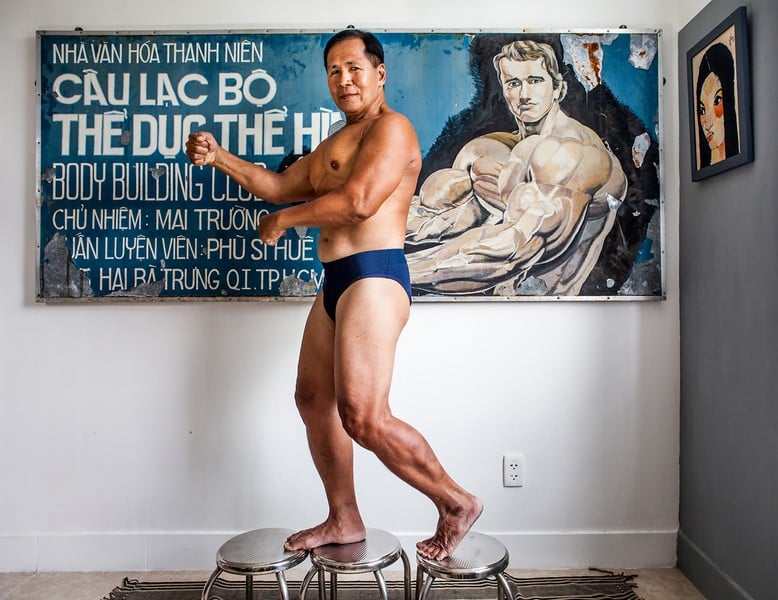