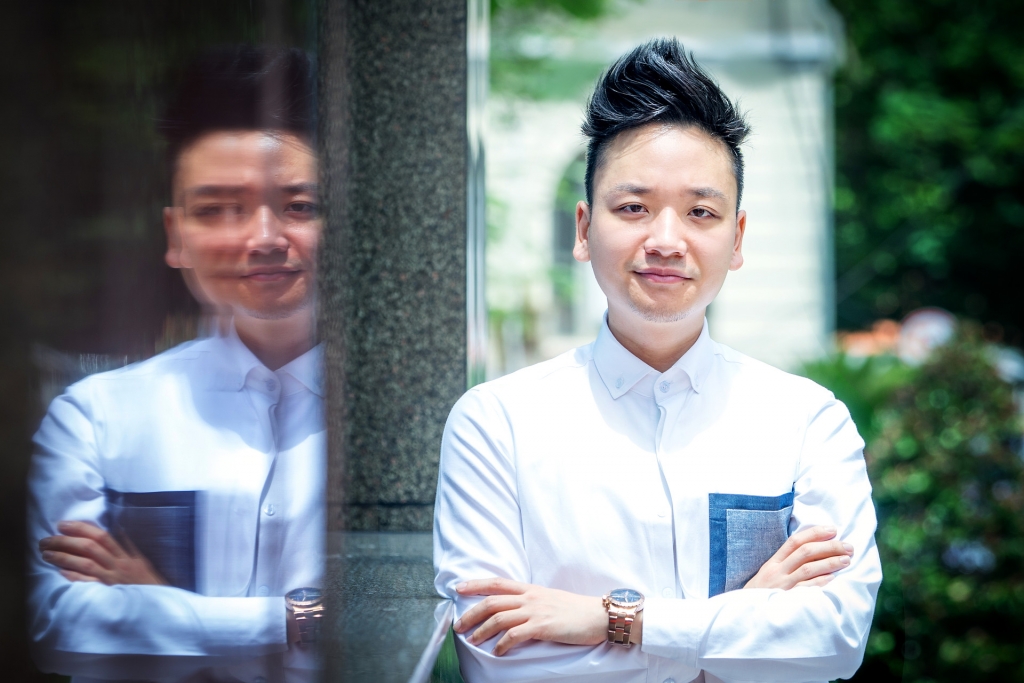 As one of Australia’s edgier young designers with a startlingly unorthodox back catalogue of genre-defying outfits, about the last people on the planet Leroy Nguyen expected to hear from were Sanrio—the creators of Hello Kitty—proposing a collaboration. When his ecstatic PR agent called with the news that the owners of a label that sells to well over half of the world’s female population wanted to talk, Leroy’s reaction wasn’t so much surprise as utter mystification. The resultant collection—a gorgeously dark array of garments featuring a sullen, defiant Kitty—is one that Leroy Nguyen is evidently very proud of, and he’s eager to clarify his respect for the brand. 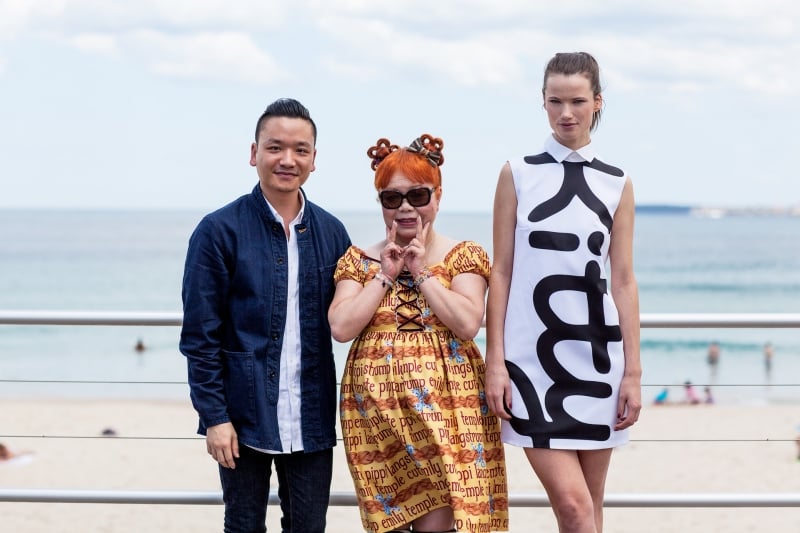 “It was an amazing collaboration,” he enthuses. “I got free rights to their imagery and text. When they first approached me, it was a strange proposition—because we’re used to the candy pics, and the pastel pics, the big letters and the red bows. For me as a designer, it just didn’t correlate. But upon meeting them, they were such beautiful people to work with. They’re hugely passionate about their brand, and they were so open to new interpretations and new angles taken on Hello Kitty, which is when I couldn’t sign the dotted line fast enough. So there’s no hatred in it, I was just trying to do a tougher edge that no one’s seen before… that is something I had to explain to them. For me, it was about finding strength within being a part of the Hello Kitty gang. In a lot of JPop and KPop culture, they have this term where they go ‘FIGHTING!’, and it’s that kind of mentality that I wanted to explore. It’s loosely based on Americana and cheerleaders and being part of the pack.” 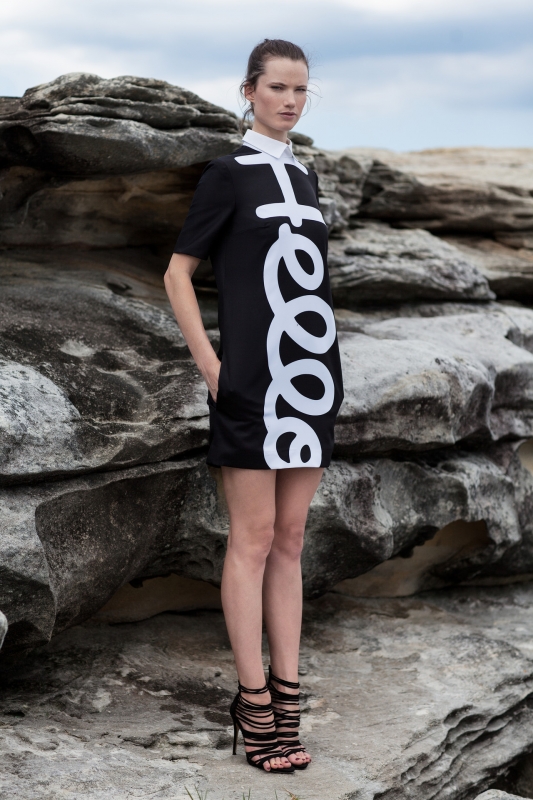 In retrospect, what Sanrio most likely saw in Leroy Nguyen was something their brand was lacking, particularly in the Australian market—an edgy, fresh energy all bundled up within an uncommonly mature design aesthetic for an emerging designer, something that has seen Leroy Nguyen turn heads since before even graduating. One of Sydney’s The Fashion Design Studio’s more memorable alumni, by the time Leroy left the school, he was being recognized by the Design Institute of Australia as design graduate of the year; his subsequent exposure at the Mercedes Benz Fashion Week saw such an immediate and intense media reaction and demand for his product that he was compelled to launch his own label without delay. A glance through his collections online can be disarming—Leroy’s work in women’s fashions spans both conservative and the more daring ends of the design spectrum, with the unifying factor being a simple respect for comfort and wear-ability. By designing for the body rather than trying to enhance a woman’s shape, Leroy manages a sensual flattery of the figure without resorting to overt sexuality. 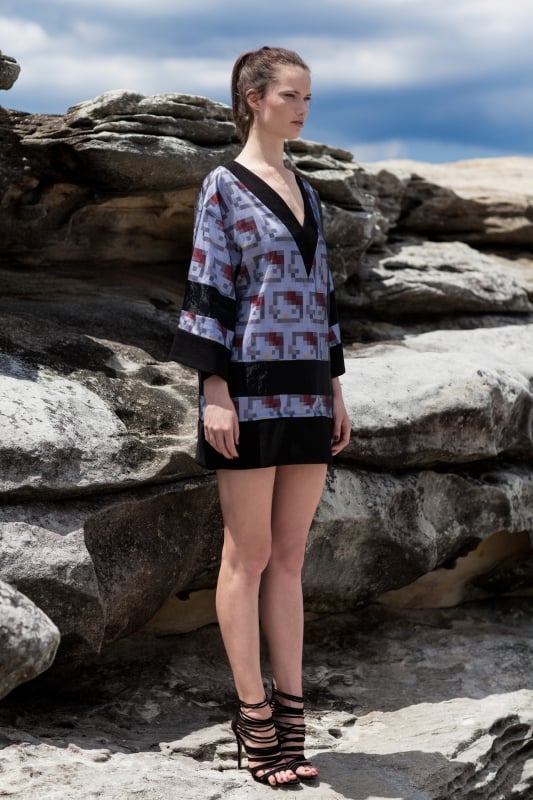 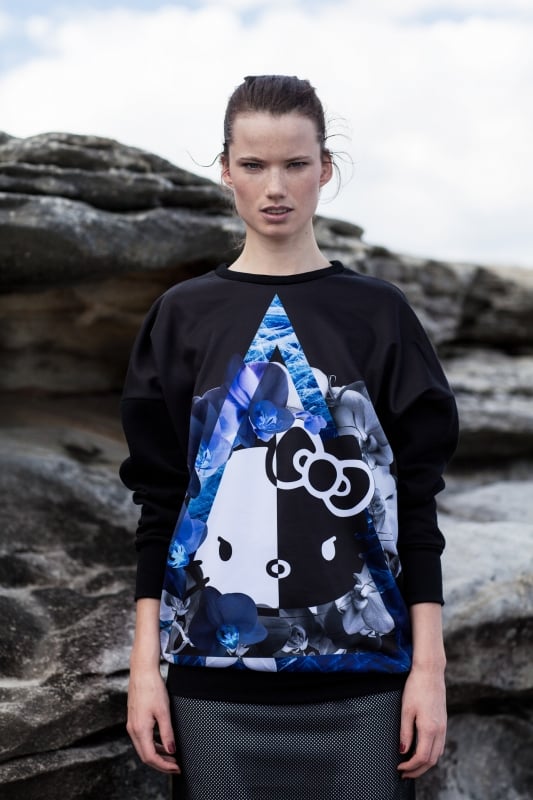 “Prior to studying arts and fashion design, I actually did a year of physiotherapy,” he explains. “I was fascinated by anatomy and playing with cadavers. How the human body moves, and all the different connective tissues and muscles and joints, I found that quite fascinating. It’s that kind of comfort and ease of movement which I think is somewhat translated in how I design around the woman’s body.”

Born in Australia as the youngest child of a Vietnamese immigrant family, Leroy Nguyen (whose older brother is celebrity chef Luke Nguyen) was in Ho Chi Minh City last month to participate in a three-day fashion colloquium held at RMIT. It wasn’t his first visit; he was here three years ago with Elle Vietnam to show in one of their Spring/Summer Collection events. “I didn’t get it,” he confides. “Back then, the industry was very much ‘great, here’s an event where we can all get dressed up together as pretty people and get photographed.’ It wasn’t about the designs on the runway. I didn’t understand, coming from Australia where it’s so nurturing of young talent, and it’s all about promoting and publicising new young talent, and putting them to the forefront. It was a completely different world here that I wasn’t quite prepared for. But in the short time of three years, coming back, we suddenly have a new wave of talent. It’s early days, but they’re being celebrated. We have advocates within the industry like Ha Mi, other magazine editors. You’ve got educational institutions that are all really gunning for a new wave of young talent and trying to push innovation and individualism, because yes, Zara is coming in at the end of the month, and it’s only going to grow and grow and grow.” 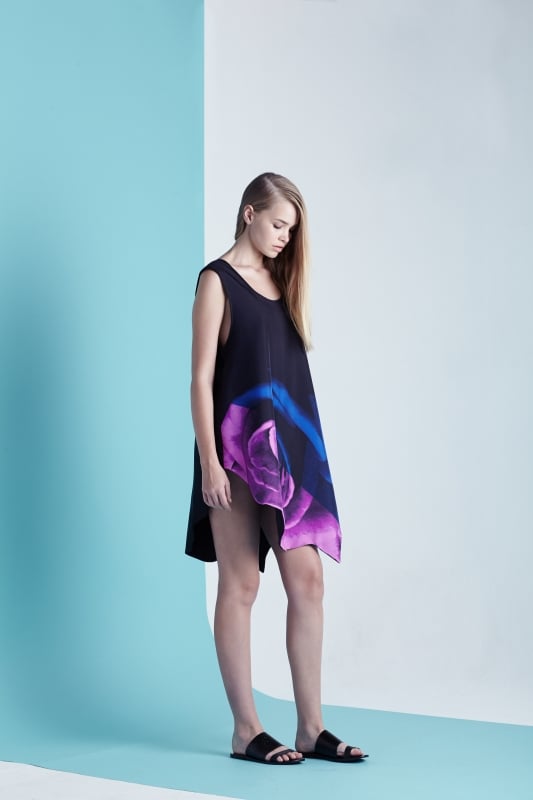 Leroy’s take on local fashion focuses on the need within the industry to cultivate a sense of self-belief among the Vietnamese youth—a difficult ask in a culture where conformity is considered virtuous. “The only way self-relevance can be cultivated is to bring the industry within defined avenues like Project Runway and Next Top Model,” he observes, “which brings them to a level that is international. When they see their own talent and their own peers within this kind of franchise, it just helps to cultivate a sense of self-belief.”

“It’s encouraging to see that within the industry,” he adds, “we do have advocates who are hoping to steer the massive sponge that is the youth of Vietnam in a direction where you can be an industry of real substance.” 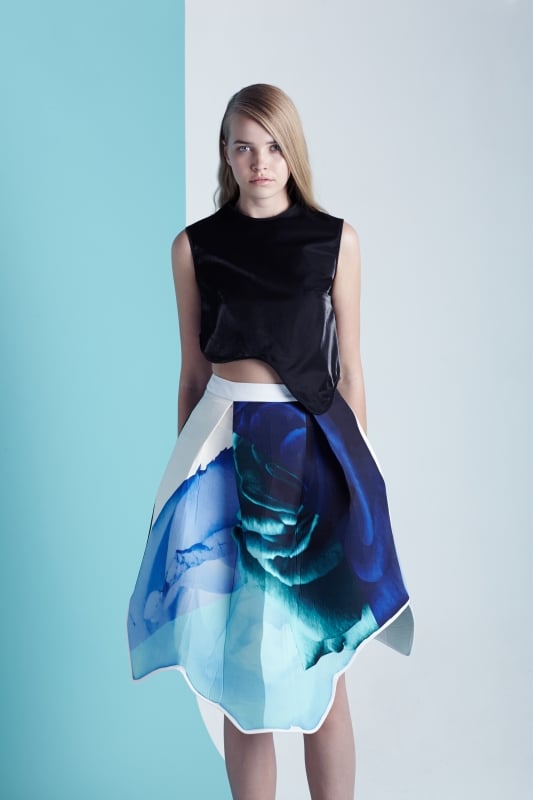 Following his participation in the colloquia panels, Leroy has developed a new appreciation for the potential of the local fashion industry, particularly in garment manufacture. “I think one thing that’s opened my eyes is the possibility for production, manufacturing, and the technology—and the possibilities that are here are endless,” he says. “I’ve seen a couple of factories—I’m not going to lie, I did have my prejudiced views beforehand, but it took my breath away. The technology that we do not have in Australia is crazy—we forget that Adidas, Nike, Ted Baker, huge global labels are produced in Vietnam. Yes, it’s probably not incredibly relevant to me as a small, emerging label that’s not doing thousands and thousands of units, but the possibilities of what is here have been incredibly inspiring; on a completely opposite scope, the artisans who are here have been incredibly inspiring as well, like getting in touch with Fashion 4 Freedom and Lan Vy—her business is all about connecting emerging small businesses to incredible artisan talent that you just don’t have in Australia. We’re such a young country of migrants, we don’t have anything like that there. So the possibilities of collaborating with Vietnamese talent here has been quite inspiring and eye-opening for me.” 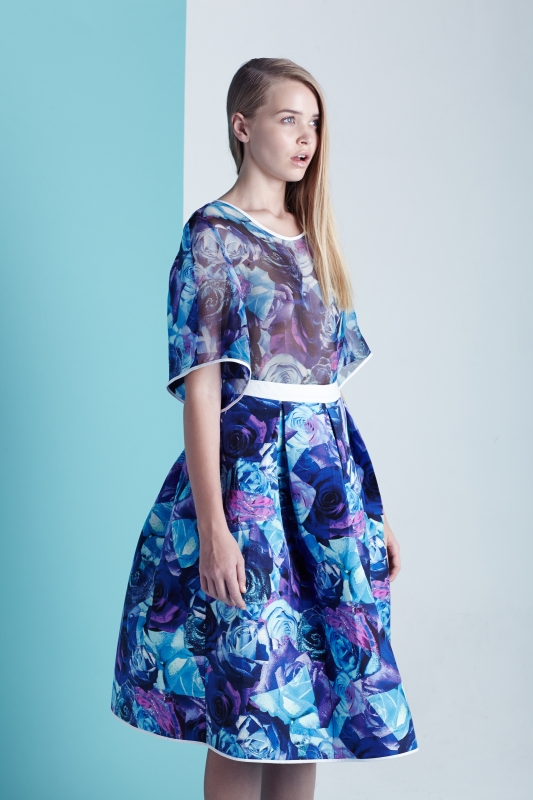 The extent to which Leroy’s own Vietnamese background is influenced by the culture of his parents is somewhat more subtle. Many commentators on his work note a certain Asian quality to his unique design DNA, although this isn’t something he consciously draws on. “When I take a step back, I can see why people feel that there is an Asian element to my design,” he admits. “For me, I think that’s just part of my heritage, and I’m naturally drawn to those shapes and lines. A unique brand aesthetic is so important as an emerging designer, because that’s the only way your consumer, your buyer, can connect with you and understand what your brand is about. For me especially, that kind of multicultural background as a designer—as a human being—and how that translates within my designs, has helped reach a unique global audience.” 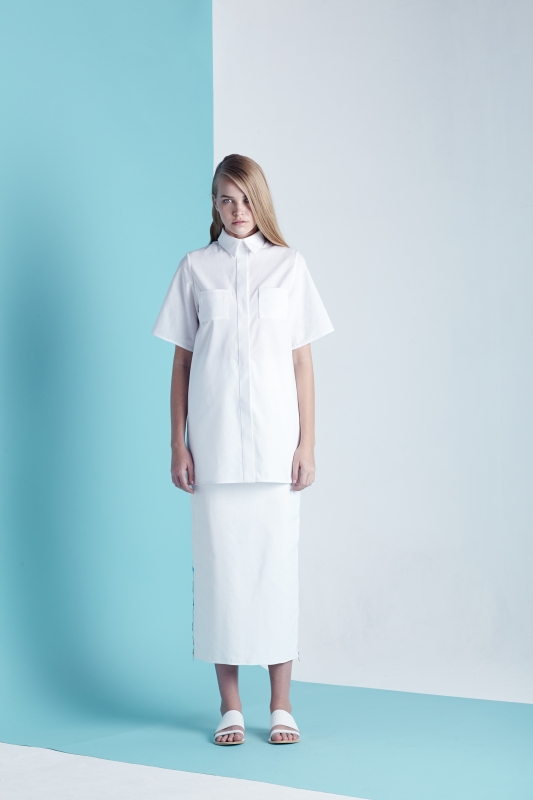 In a sense, Leroy Nguyen’s approach to the potential for individuality and self-actualization within Vietnamese fashion mirrors his work on the reinvention of Hello Kitty. Presented with the ultimate icon of Japanese kawaii—the antithesis, perhaps, of his own aesthetic—Leroy managed to build his own interpretation of the brand while still managing to convey its core values of “purity, happiness and love.”

“It’s a positive notion of strength, even though it’s presented in a darker manner,” he says affectionately. “Strength and positivity comes in all forms, it doesn’t always have to be white and pink.”