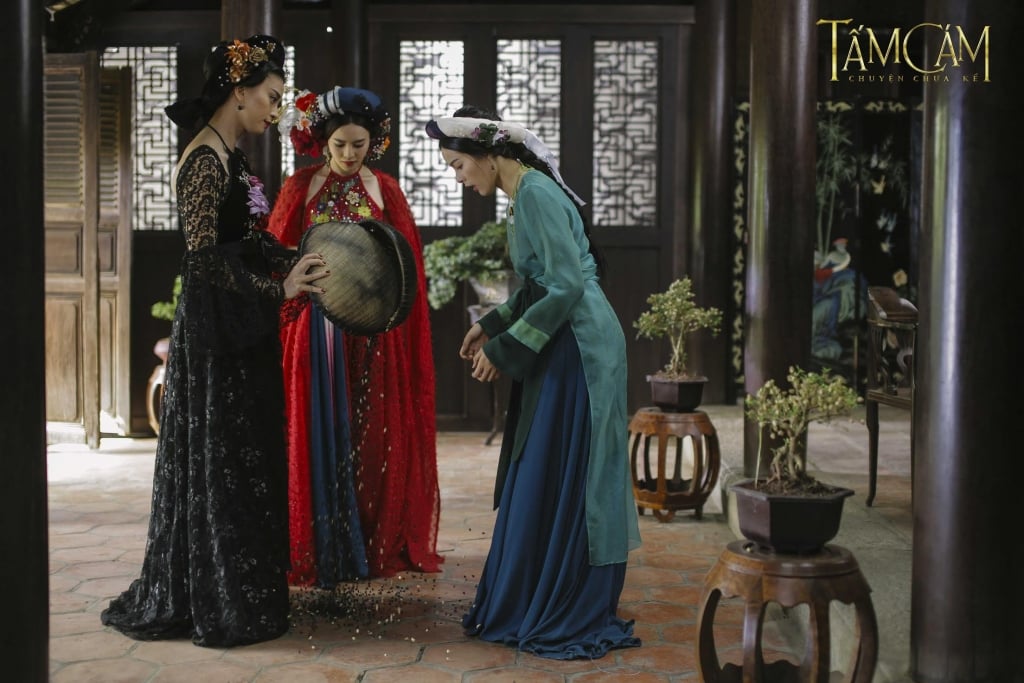 Once Upon A Time

The past decade has been a period of phenomenal change for Vietnamese cinema. One of the most significant drivers of that change has been the influence of returning Overseas Vietnamese dramatic artists and filmmakers, who have been working to bring a touch of Hollywood panache to the entire homegrown industry. This trend was largely initiated by American Viet Kieu Charlie Nguyen’s 2007 martial arts flick The Rebel, often regarded as the first true commercial Vietnamese-language film for coke-&-popcorn audiences. At a time when there simply weren’t enough theaters to financially sustain a big-budget cinematic release, The Rebel proved that local movies could still attract sell-out crowds. Everything that has happened in Vietnamese cinema since that time has been touched by its success.

The Rebel’s leading actress was young starlet Ngo Thanh Van, a Norwegian-educated girl from Tra Vinh who had returned to Vietnam to become a model, actress and singer. Van now has her own talent agency (VAA) and a decade’s worth of experience in the industry under her belt—and last month, she released her own major contribution to the evolution of local cinema with Tam Cam: The Untold Story. Part Hollywoodstyle blockbuster, part Chinese kungfu fantasy piece, and 100 percent Vietnamese in execution—the film is a beautifully-rendered treatment of the traditional Vietnamese Cinderella fable Tam & Cam.

Tam Cam is something of a cautious epic. While it doffs its hat to international giants of the genre such as Crouching Tiger, Hidden Dragon, the film holds firmly to its Vietnamese roots through its somewhat rural sense of humor and conspicuous locally-inspired costume. One of Tam Cam’s riskier elements is its cast of mostly new, relatively inexperienced actors—while there are a few veterans taking supporting roles (including distinguished entertainer Thanh Loc, as well as Ngo Thanh Van herself, who plays the part of the evil stepmother), the film is dominated by its ensemble of fresh-faced young leads.

One of the film’s surprise performances is delivered by rising talent Ninh Duong Lan Ngoc, who plays Cam—the evil stepsister who conspires with her mother to murder Tam after she marries her handsome prince. Lan Ngoc has received several awards for her previous roles as heroines; she was originally cast as Tam Cam’s protagonist, but switched as soon as the bad-girl part became available after the original actress couldn’t commit to the project. 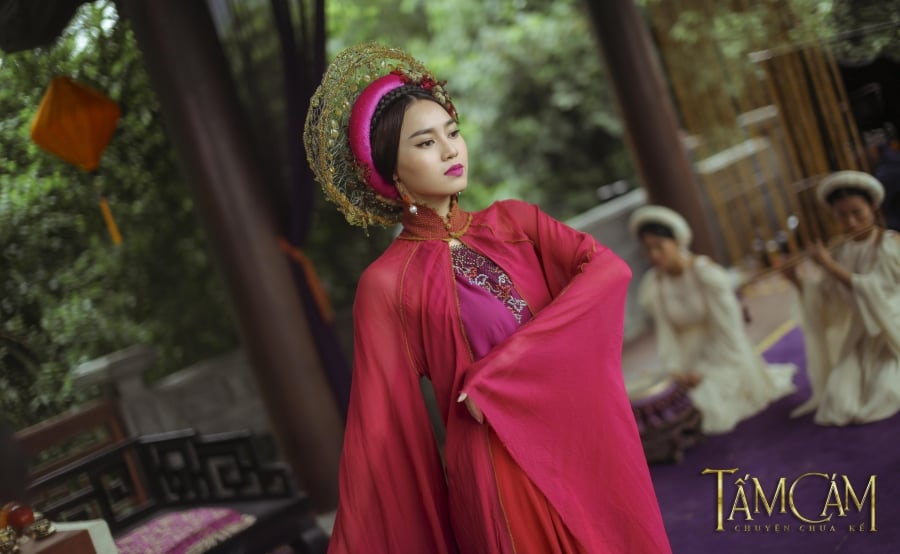 “When I heard that, I immediately asked to play Cam,” says Lan Ngoc, speaking to Oi Vietnam just before the premiere of the film last month. “There was nothing for me to exploit in Tam, I could have performed her with my eyes closed, she was too easy for me. I’m not afraid of villainous roles, I was just worried that I couldn’t adapt—so far, all of my characters have been ones with a sad destiny, essentially honest girls. Tam is even ‘lighter’ than my previous characters; there’s no background context, she’s always assisted by the fairy, whereas my previous characters were taken from real life. They have to fight back when things get tough, they have to suffer to overcome their trials. When Tam cries, the fairy just appears. But Cam is different. There were many things I had to change—in my voice, my manner, my performance… I didn’t want it to be similar to anything I’ve done before.”

In the fairytale, the spirit of Tam returns to life as a bird, and later in other forms, to protect her beloved prince in times of peril. In previous dramatic treatments of the story, the effective immortality of this character has often drawn suspicion. “It’s said that in the end, Tam boiled Cam and her mother alive,” says Lan Ngoc. “People sometimes think the cruelest character is Tam, because she was like a demon that can’t be killed. I didn’t look at it that way. When we do something cruel, there should be a kind of restlessness in us that makes us wish we hadn’t done something wrong or brought about bad consequences. I think Tam was reborn after she was killed in order to give Cam a chance to look back and rethink what she did—‘if I had a second chance, I wouldn’t kill you.’ But no, she didn’t. I see Cam as being undeniably cruel. People shouldn’t be able to say that her cruelty comes out of obedience to her mother and that she’s actually a good person underneath: Cam is bad to the bone, inside and out.” 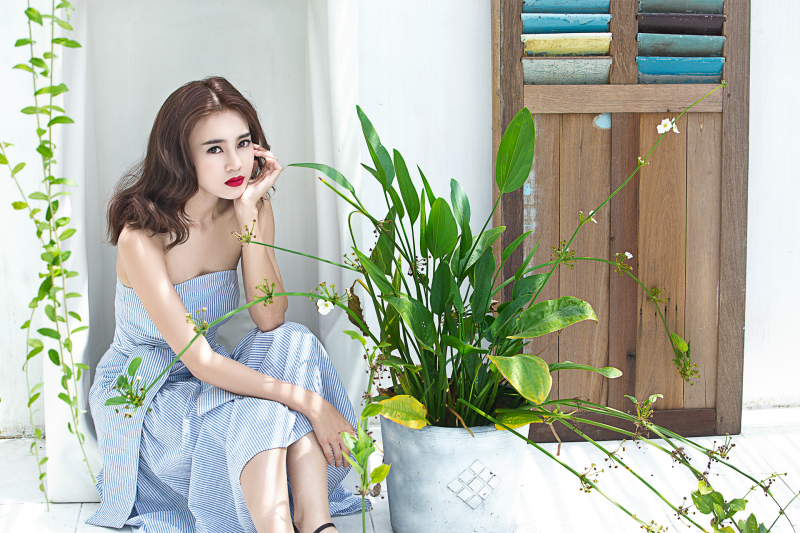 Now 26, Lan Ngoc has been appearing in movies since she was 19. She’d been attending casting calls since her first year at the College of Theater and Cinema, but hadn’t had any luck until she reluctantly attended a longshot tryout for a major project—Nguyen Phan Quang Binh’s Floating Lives—and scored a major role. “It was a huge project with a big investment that had been in development for three years,” remembers Lan Ngoc. “I realized that there was no way I could hope to be involved, but out of respect to a good friend, I went for casting. Afterwards there was the usual ‘OK, now you can go, we’ll call you if there’s anything.’ So I said to myself ‘Fine, back to my studies.’ At the time, I was considering another major, because my family background is in police work, and I wanted to follow that path—but before anything else happened, I was told I was chosen. In general, it was really tough to get that role, that opportunity. But when we actually started to produce it, there were even more difficulties. A young actress without any experience knows nothing. There was a lot of pressure. I cried a lot.”

The filming regime was tough. “I wasn’t allowed to go home for two months, I had to stay in the studio at Long An,” says Lan Ngoc. “It was like an isolated island. I wasn’t allowed to go home because the director wanted me to nurture a certain mentality. My character in Floating Lives, Nuong, is a girl who suffers from an untold sadness deep in her heart; the director wanted me to cultivate that mindset. Those two months were very hard. I didn’t know how it would be perceived when it was released. Then when it did come out, people read the character differently than I expected, saying she was very good, very natural. That was an opportunity for me to be noticed by audiences. Now whenever my name is mentioned, people think of Nuong. Anything we do passionately really does get rewarded in kind.” 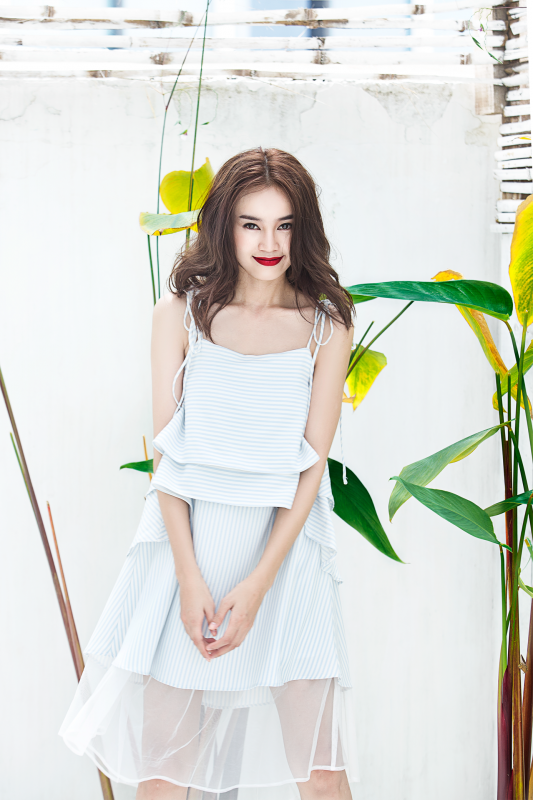 Lan Ngoc has delivered a number of other strong performances in her short career since playing Nuong, but the character of Cam is certainly a standout role for her, and she is exceptionally proud of the production. “People rarely judge costume movies accurately,” she observes, “but we have our own way of thinking. For example, Blood Letter [Victor Vu’s 2012 martial arts drama] was set in a specific dynasty, while Tam Cam is in no specific dynasty or time. We always imagine that those characters would wear traditional simple costumes, but the costumes in the film were really amazing. No one could have ever thought of those details but Ngo Thanh Van—big headgear with huge flowers, the heavy brass armor worn in the castle—exceptionally beautiful. The costumes are gorgeous, they don’t need to match a certain dynasty. Our setting is similar to one you might see in China, there’s an old castle, but we weren’t as developed, and had no choice but to create one in 3D. There’s lots of 3D work in this movie. It’s still a stretch to compare it to Crouching Tiger, Hidden Dragon, but we can still suppose this is a blockbuster for Vietnamese people. There are many breakthroughs, such as the 3D work. It was supposed that those things couldn’t be done here, but we did it.”

To Lan Ngoc, this production of Tam Cam still represents the Vietnamese culture at heart, despite the influences of international cinema and cinematic techniques. “Each place has its own culture,” she reasons. “In Cinderella, people look very elegant—even her stepmother, her two stepsisters. But in Tam Cam, they’re ordinary people, the typical Vietnamese countryside people of the past. Cinderella doesn’t have to do farm work or go fishing. She went to a great ball, while in Tam Cam, it’s just a local fair. There are many other added details, but in sum, it’s still the case that the good people are always rewarded, while the evil ones will be punished. The common story ends with Cam and the stepmother put in jail, while Tam becomes a queen and lives happily ever after with the prince. That’s for children, that’s why the fairytale gives only the most beautiful parts. Only as adults do we explore the other details.”

Ultimately, Lan Ngoc recognizes the long tradition that Tam Cam represents. “There were versions of this story made as play, cai luong opera… but never a movie until now,” she says. “Van is a foreigner, a lot of her friends are foreigners, so when producing movies, she also aims at foreigners so that they can come to enjoy it, just as we Vietnamese go to watch Cinderella. That’s also part of our love toward our country. When we do something, we expect it to be taken overseas and made well-known. I think not only Tam Cam, but every Vietnamese movie shares that same expectation. We just want to promote and expand our film industry.”

IMAGES BY DUY DINH AND LUCIOLA