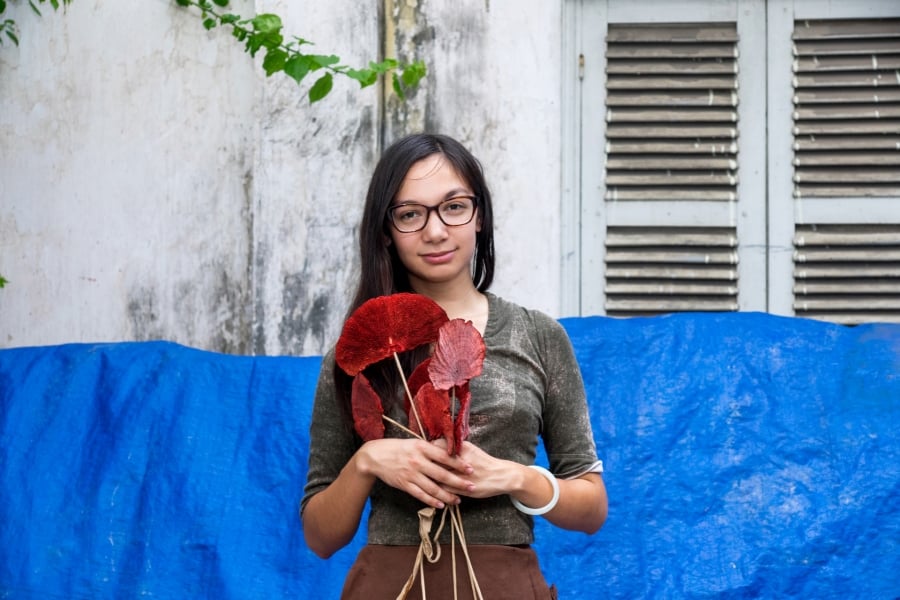 Stepping into Auralynn Nguyen’s small studio in Tan Dinh on a rainy May day I felt immediately at ease. The cozy space consisted of just two dark wood side tables surrounded by the flowers and plants we would use for the day. On the wall above was a collection of items that Auralynn, an urban magpie, had collected from Saigon’s streets and fashioned into unique pieces of sculpture.

These included fallen branches, nailed together to make a square, intersecting, raft-like object and a flower vase fashioned from plastic straws and nylon bands. The windows, fitted with ornate cast iron shutters of aptly floral design, let just enough light through to work by and, like the traditional Japanese tokonoma, or alcove, that her art form was designed to ornament, promoted a sense of quiet inspiration.

Auralynn began studying Sogetsu Ikebana—a modern incarnation of an ancient Japanese form of floral arrangement—just five years ago at the tender age of 20. She was inspired by a book on the subject that she happened upon in her hometown of Los Angeles, in the US.

“I began reading and realized it was very prophetic. I realized that Japanese art is very misunderstood in the West,” says Auralynn. She discovered that, contrary to what she feels is a common perception, Japanese flower design is highly academic, intricately precise and deeply meaningful. 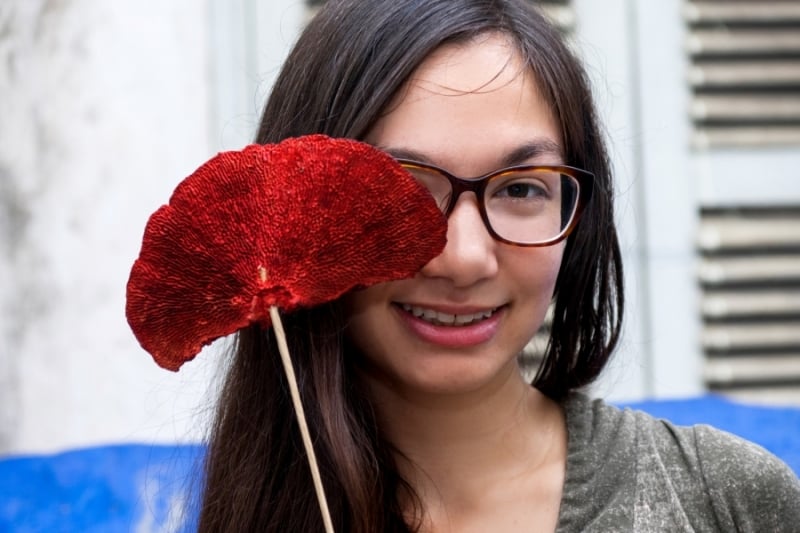 This was evident from the very beginning of our lesson, when Auralynn introduced me to the first of five textbooks in the Sogetsu Ikebana literary canon. Book one, from which all students start, explains the basic techniques and principles of Ikebana, from how to handle the tools, the flowers and how to calculate the math. “Yes, there is a lot of math!,” Auralynn says through a giggle in response to my evident expression of horror, “but don’t worry, it’s very easy.”

Referring to the kakei-zu, or blueprint of the arrangement, we began with the basic upright Ikebana style, or moribana. This is based on three central pillars: shin (man), soe (heaven) and hikae (earth). As Auralynn explained, Ikebana is firmly rooted in Zen principles, and so putting these three elements into perfect balance is essential.

I began by choosing my container, or suiban—a shallow, round tray filled with just a centimeter of water that is a typical starting block for new students—I went for a red one. On Auralynn’s advice I then chose delicate white lilies and a verdant bunch of fragrant oleander for my first Ikebana design.

The tallest sprig of oleander was for shin, which stands in the center of the arrangement leaning at just a slight 15-degree angle. Under Auralynn’s watchful eye I sheared the stem of the plant underwater—as all Ikebana is cut in order to preserve the flowers for longer—to a height approximately twice the circumference of the container, plus an inch for the height (the dreaded math).

I then positioned my shin inside the suiban onto the kenzan, a heavy, fearful looking gray metal disk arrayed with small sharp spikes that holds this style of Ikebana arrangement in place. “As well as the foundation for Ikebana, this is also a neat, handbag sized weapon,” Auralynn quipped, perhaps sensing my fear at losing a finger in the creative process. 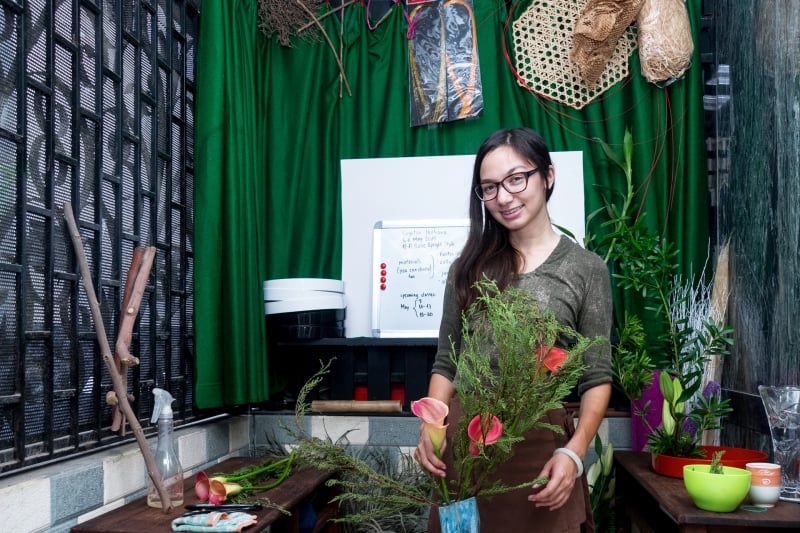 Next came soi, for which I chose a stockier, more foliate piece of oleander and placed it to the left of shin at a strict 45-degree angle to the center of the kenzan.

However, my biggest challenge came in hikae, where I found myself deeply reluctant to cut an entire unopened lily from its stem in order to create the right balance for the piece.

To this, however, Auralynn was unsympathetic: “Ikebana involves a lot of sacrifices; you cannot have sentiment. You can’t worry about cutting flowers because they’re too pretty. If the flower is too pretty you can’t do Ikebana. Ikebana is about what you express right now,” she gently, but firmly insisted.

Auralynn explained that Ikebana was founded by Japanese samurais in the Jomon period around 1200BC and was intended as an offering to honor important visitors. The first designs were highly floral and natural, however, as the form developed over the centuries it has become more structural, culminating in the Sogetsu School.

Sogetsu Ikebana was founded in 1927 by Ikebana artist Sofu who, heavily influenced by modernist European sculptors like Dechamp, transformed Ikebana into a progressive form designed to express the personality and creativity of the artist. This is the spirit that Auralynn is trying to bring back into Ikebana today. “In the US, Ikebana has become something of a housewives art for middle aged women,” she says. “That’s why I wanted to come here to Saigon where there is no tradition of Sogetsu Ikebana so I could introduce it to young people.”

Gratifyingly, Auralynn reports that since she began giving lessons three months ago, most of her students so far have been aged between 22 and 25.

However, she is quick to add that Ikebana is for anyone. In Japan, the average age of an Ikebana tutor is around 80 and, as I could see from pictures of the teachers and their often highly conceptual, sometimes industrial style work, age is no barrier to creativity. “Ikebana keeps you young,” she jokes. 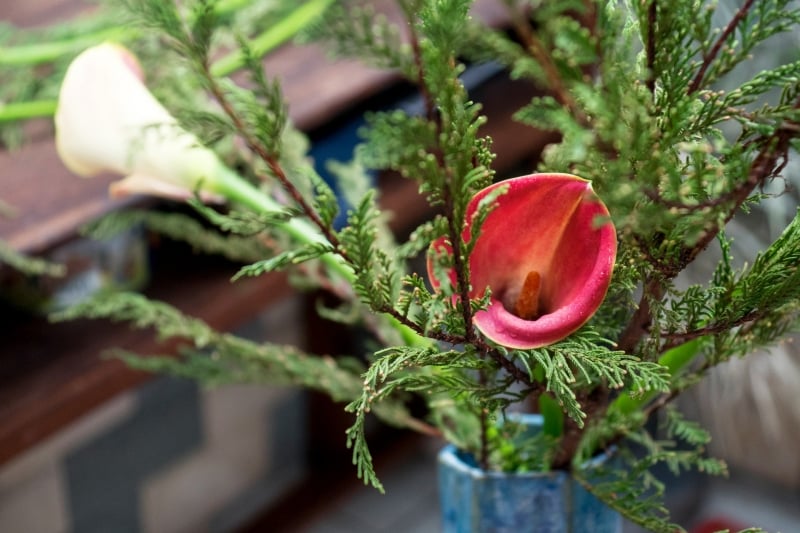 Emboldened, though not without regret, I cut the lily loose from its parent stem and, as stipulated in the kakei-zu, pared the stalk down to half the size of soi. Impaling the flower on the kenzan, I then placed it at a 75-degree angle to the right of center. All that was left to be done was to add jushi to the bottom of the arrangement to cover the kenzan and to create depth. With Auralynn’s guidance I chose some cuttings of oleander that I had sheared from shin and soe.

My arrangement completed, I immediately understood what Auralynn had said about sacrifice and harmony. By paring back these plants to their barest forms and arranging them at precise angles, I had created something of simple, yet refined beauty.

For more info on Auralynn’s Sogetsu Ikebana, visit Facebook: sogetsusaigon or for some stunning examples of her work go to Instagram: sogetsusaigon.