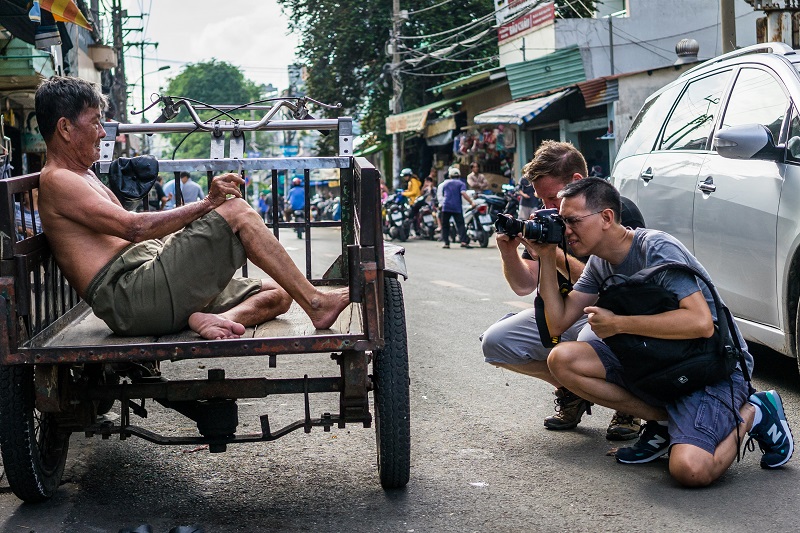 Explore the city with a different focus.

There are few things that will get any reasonable person out of bed at 6am on a Sunday morning. For the keen Saigon street photographer, however, this is the sweet spot. As Quinn Ryan Mattingly, owner of Saigon School of Imaging and local tour leader explained to me, it is the early morning light that affords the best photo opportunities and why he almost always runs his tours at such ungodly hours—although on request you can push for the ‘golden light’ of late afternoon.

Scooping my tour companion Terrence and I up from Liberty Central in a private car, Quinn and fellow local photographer Chris ferried us to District 5 to capture the dappled morning light illuminating market traders in Cho Lon (Chinatown). As is usual for his bespoke tours, Quinn had designed today’s itinerary around Terrence, a visitor from Hong Kong who was keen to shoot typical Saigon street life outside of the city’s usual tourist destinations. 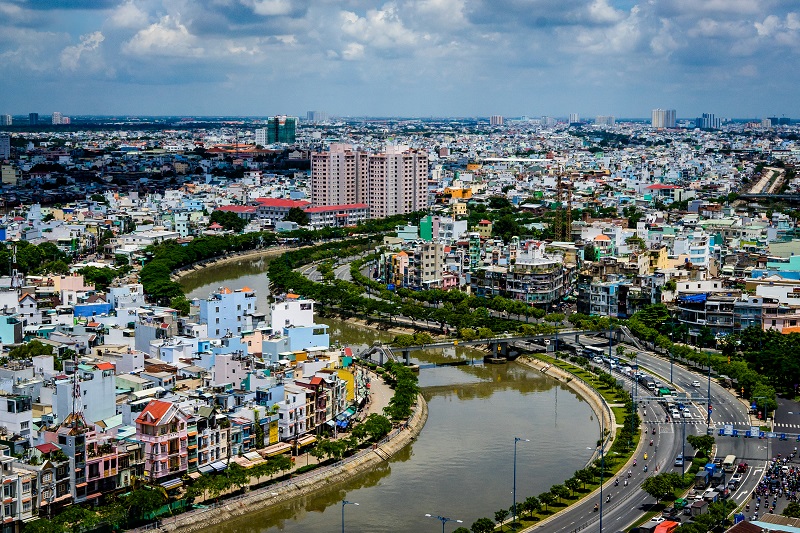 Binh Tay Market proved rich pickings. Arriving at 7am we were privy to intimate scenes among local workers—from the setting up of food stalls to produce laden delivery bicycles to wizened market hawkers crouching over steaming bowls of breakfast pho. Quinn took a handsoff approach with both Terrence and I, allowing us to freely explore both the market and our cameras, while keeping an eye out for the perfect photo opportunity.

As a novice photographer, I was personally keen for a little more direction, and so Quinn ran me through some of the finer points of the Sony A7II Mirrorless camera I was using today, including how to adjust shutter speed for lighting conditions—which I discovered is the most important factor in a crowded and shady market—and how to scope out the right light, background and subject for that perfect shot. 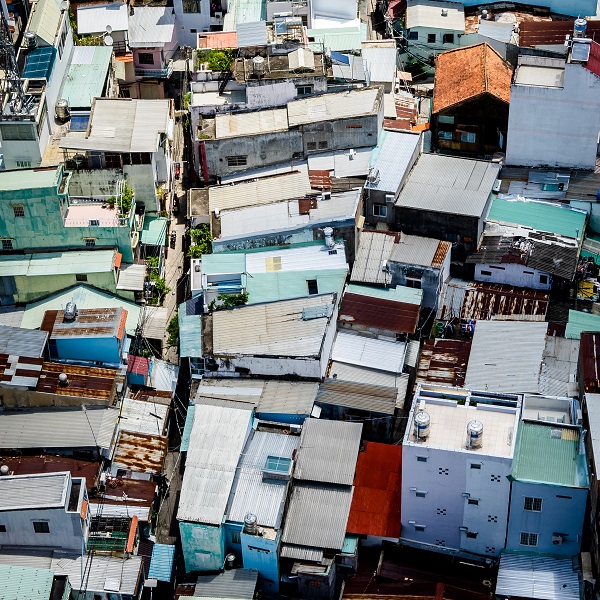 Out Of The Tourist Position

Having lived in Saigon for over ten years, Quinn has seen his fair share of markets, but he remains an avid observer:

“Wider shots of stalls or busy alleys are not so interesting for me. Instead I’m looking for unusual lighting or interesting characters,” he explained. Getting closer to local characters is made easier by Quinn’s easy manner and good Vietnamese, which he uses to gently cajole subjects into posing for photographs.

This allowed both Terrence and myself the opportunity to observe and capture locals in private moments with ease. One middle-aged Vietnamese man, reclining in the early morning sun on a weather beaten wooden cart, initially declined a photo shoot, however after a little banter Quinn and Terrence were able to photograph him in a relaxed, natural pose. In my six months in Saigon I hadn’t felt so comfortable as I was walking around with a bulky camera and three tall Western men. 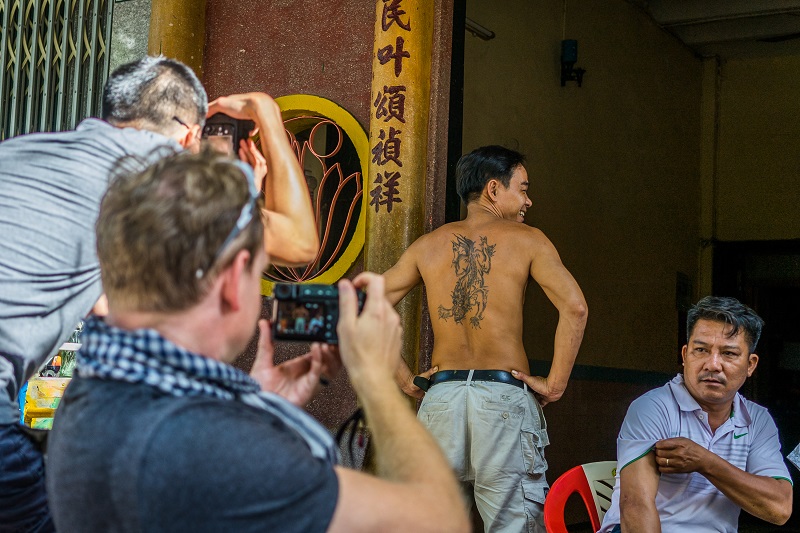 Quinn’s approach also exploded my former notion of the skulking street photographer—crouching unseen in alleyways attempting to capture hidden moments. Instead, I realized that the secret to good street photography is to engage and interact with the people around you, particularly in Saigon. “Whatever you give out to the Vietnamese you get back tenfold,” explained Quinn. He did add, however, that you should adapt to your environment, stating that in New York, for example, he might stick to skulking.

As we approached a group of children playing a game of cards, Quinn also gave some technical direction, explaining that for smaller subjects, or indeed those sitting or lying, it is important to adjust the camera angle: “Photos taken from above generally don’t look great: you need to come down to your subject’s level, get out of the tourist position,” he quite rightly remonstrated as I squatted down on my haunches. 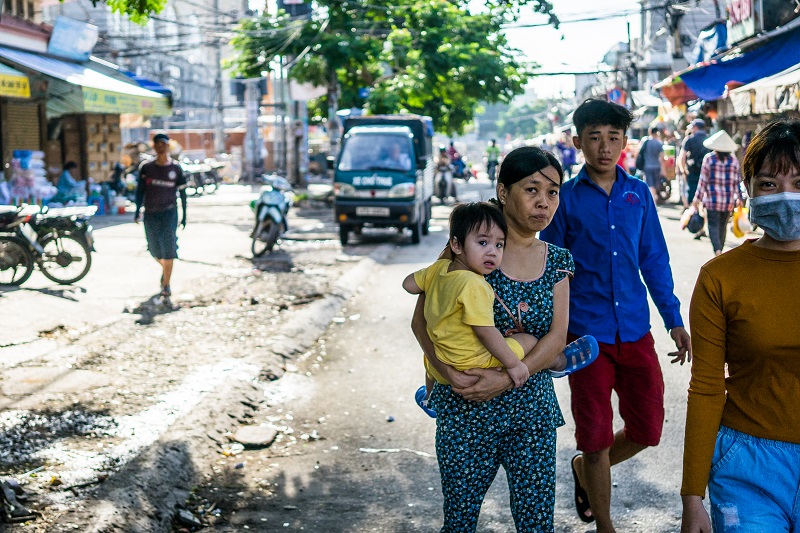 While technical ability, a ‘good eye’ and a friendly approachable manner are all key attributes for a good street photographer, simply finding yourself in the right place at the right time often makes for the most interesting shots. We found this as we stopped mid-way through our tour for a well-earned ca phe den da—included in the tour package—which turned into a photo shoot of the owner’s impressive full back dragon tattoo and many shots of curious café goers sporting Chris’s Oakley shades.

Moving on to District 8, we got another golden opportunity at the river in the form of a barge transporting coal, from which blackened, wiry men were ferrying laden baskets across a precarious wooden plank. Here I also learned the importance of patience. Crouching in the blistering midday sun, Terrence, Chris and I waited for the perfect shot of a worker midplank. However, getting a little bored, I began flicking through my pictures and, of course, I missed the shot. “We call that chimping,” Quinn told me through a laugh, “as a street photographer sometimes you just have to sit and wait.” 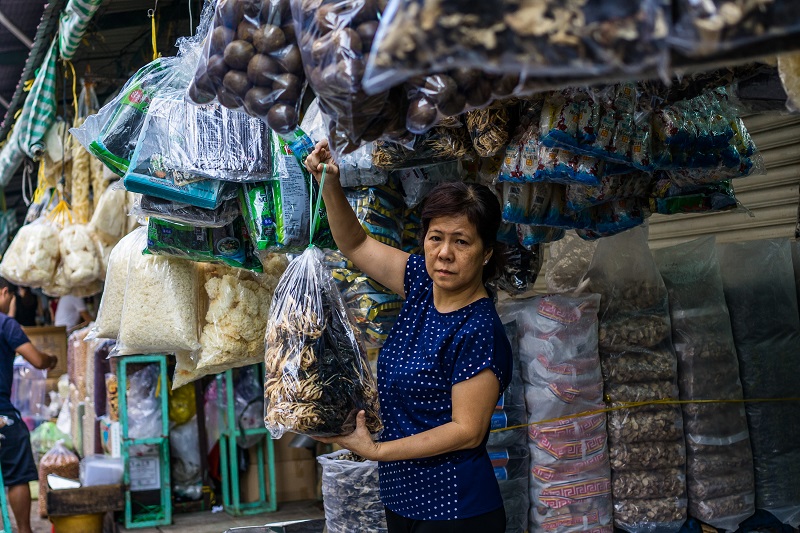 Thankfully our last stop was more of a known quantity, with Quinn taking us to a local knife sharpener famous for his pet monkey. Clearly on friendly terms with Quinn, the characterful man—sporting a wide toothless grin and russet, leathery skin—was happy to bring his pet out for us to photograph. Hopping around manically, the lively monkey grasped and chewed everything in his path, from a mango to a screwdriver, while his affectionate bond with the man made for a set of touching photographs.

With warm smiles, many thanks and, notably, no money changing hands, we left and headed back to our car. The experience, alongside the many unique moments of the morning, had given me an entirely new perspective on Saigon; one that had I stayed even another year I don’t think I would have gained on my own.

To book a tour with Quinn see: www.saigonimaging.com. Prices range from USD200 for a private tour to USD400 for a group of six including pickup and drop-off in District 1, transport, drinks and photo tips and guidance. Both high tech cameras and smart phones are welcomed. 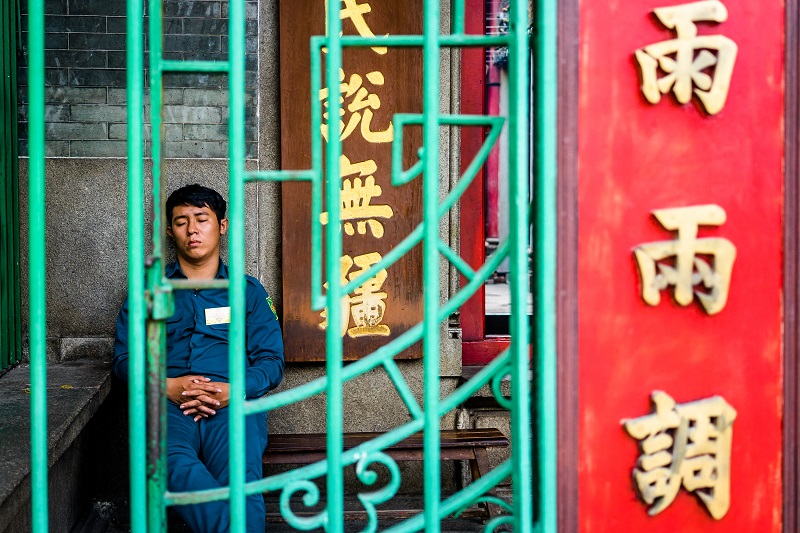