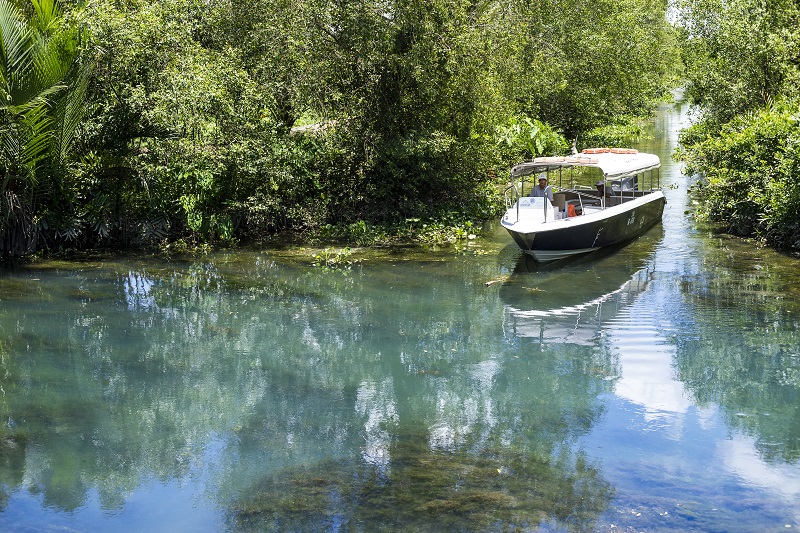 It was 8:15 in the morning when my group, composed of myself, a sun-punished Englishwoman, a very tall Kiwi and two younger daughters set out towards the mangrove forests of Can Gio, a short 45 minutes to an hour boat trip along the many aquatic arteries that surround Ho Chi Minh City. The trip, organized by Les Rives, was to take us on an air-cleaning trip outside the city. As the city skyline started shrinking above the humming motor of our speedboat, buildings, cars, noises et al cleared too, until we were surrounded only with the water and the thickets lining the banks.

As we left Saigon behind, it was time to get some restauration before we hit our first destination of the day trip: Can Giuoc Market, a short half hour away. We were given banh mi, fruit, ca phe sua da, soft drinks and water to kick us off before alighting our boat and heading into the riverside market. Like the markets in Saigon, this was the site of huge variety of stalls where you could buy anything from skinning equipment to the paper iPhones that are burned as an offering to one’s ancestors in the afterlife. Our guide very helpfully pointed out the many different objects and foods that we may not be accustomed to as we meandered through the tight little alleyways on our way back to where the boat was docked, ready for our next destination. 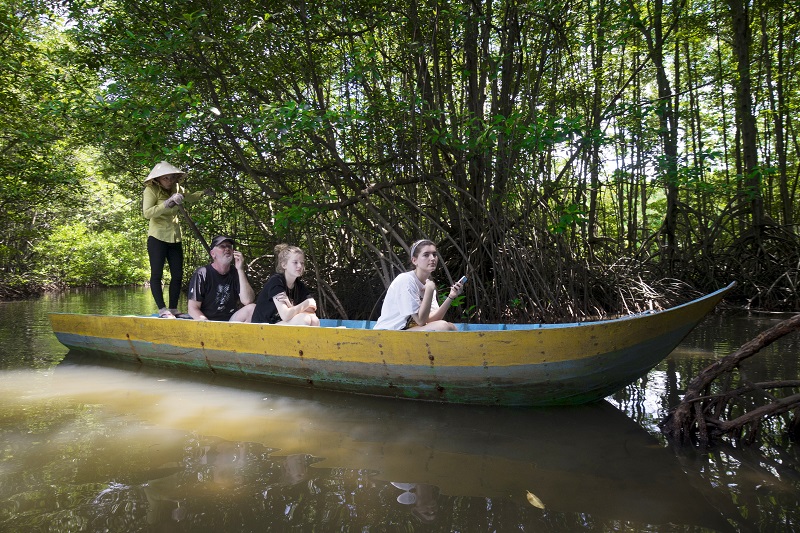 The destination in question was the Giant Bat Lagoon, situated within the mangrove forest that superseded the palm trees as we got further and further out. As a fan of all of David Attenborough’s output, I was ready to sink my teeth into some animal sightseeing. At the behest of our hosts we quietened down as we got into the small boats that would take us around the lagoon, past mud-skippers, water striders and a menagerie of other lagoon-dwellers, some of whom were fixing a pipe or some such thing behind an outdoor toilet.

The lagoon itself is an impressive sight: a thick, dark green mass of waterweeds with small fish ducking in and out of its cover. As we floated silently across this verdant mirror, we were all struck by the stillness of the area. Apart from the occasional animal sounds, the lagoon is completely quiet, the atmosphere heavy with the humidity that rose from the lagoon mingled with the beating sunlight. As we moved around the lagoon we approached the banks near where the bats roost their days away to be in fighting form for the night. The sleepy bats were a bit of a struggle to spot, hidden behind thick foliage at first, but soon one lumbered into sight, unwieldy and encumbered as it climbed through the branches on hooked claws. It looked out of place, this swooping animal struggling slightly even to move a few feet but it persevered, dangling and hopping its way slowly out of sight and marking our imminent departure. 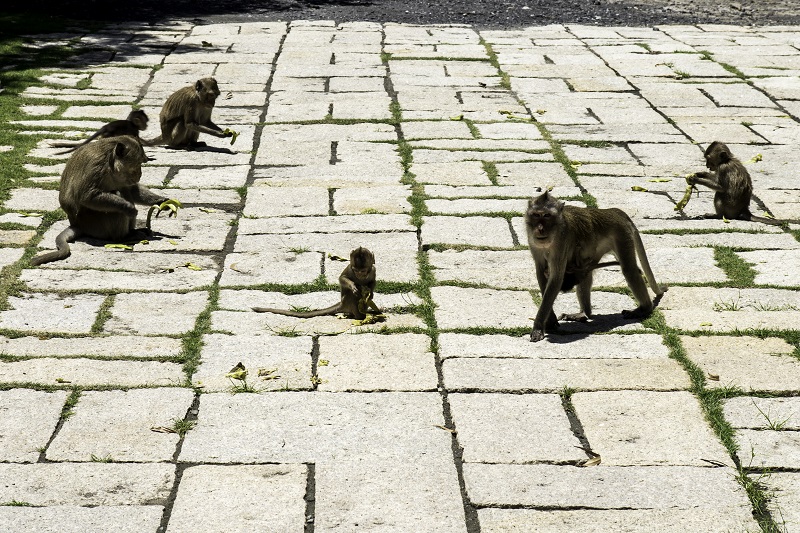 We wound our way back around from there and got back on dry land where we began a small trek through the mangrove forest towards a tower viewing post. From the top of the tower we were awarded a 360-degree view of the canopy and the birds that made it their home. The variety of different species we found up there was quite astounding and we took the opportunity to take a breather and enjoy the sumptuous sights.

From there we moved to our penultimate destination: the place where the monkeys dwelled. On the way, our guide explained that the monkeys had a big chief, like many a barrels of monkeys, and  that we were to watch out for him. Looking him straight in the eyes, he said, had a chance of coming across as a challenge and could lead to a fight. We arrived before I had time to conclude weighing up the pros versus the cons of challenging this big cheese for supremacy of the tribe, but I was tempted. The wilderness of monkeys was called forth from the forests by expert howlers who signalled for them that it was time to feed. Twenty or 30 of them came charging out of the trees and the undergrowth, eager for some bananas and we were only too happy to oblige. I spotted the main honcho easily, a hulking (by monkey standards) mass of testosterone and fur, but decided against trying to stage a coup against the monkey king. 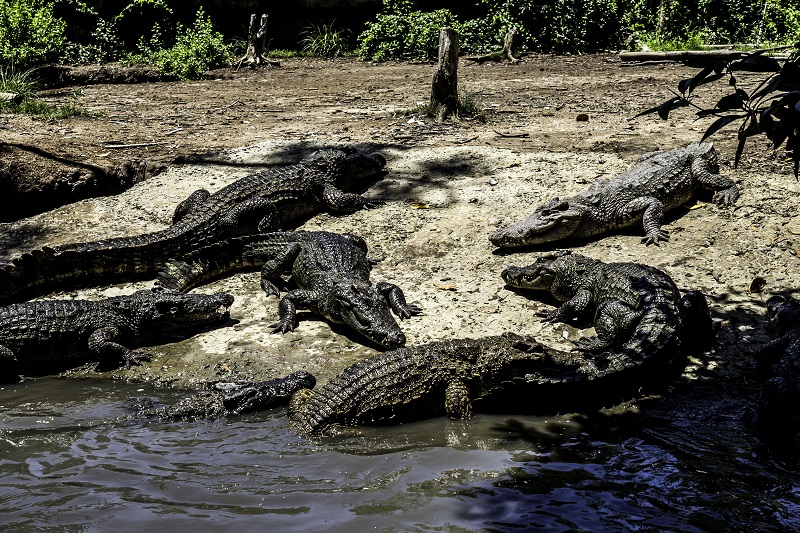 The real jewel of the trip was our last stop at a half-wild alligator farm (halfwild being when animals are kept in an area that is otherwise wild and are fed). We took a float out onto the waters and the scary ancient lizards followed. They knew the score already and snapped up the first pieces of fish we dangled over board on our rods with ease. Soon, however, we became adept at this sport, prompting the alligators to surge higher and higher out of the dark waters, their heavy jaws snapping shut with a crack as they vied for altitude and the bait.

After seeing the alligators, it was sadly time to have our own meal and have a wander through the forests one last time before heading home over a new stretch of water.

Operated by Les Rives, reconnect with nature on this eco-adventure riverboat tour to the mangrove forests of Can Gio UNESCO Biosphere Reserve. Booked through lesrivesexperience.com or +84 128 592 0018 (Call, Whatsapp or iMessage).