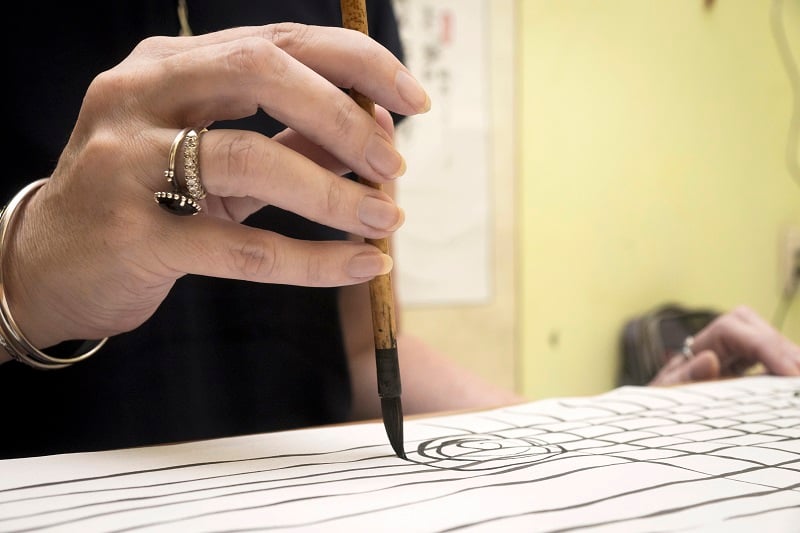 Leave the world in a few fluid strokes

I met the indomitable Barbara Adam, local author, founder of Saigon Street Eats and organizer of the Calligraphy and Coffee Trail tour I was about to embark on, on the steps of Saigon’s iconic Opera House on a bright Saturday morning. Having never tried Vietnamese calligraphy before, or indeed even thought to, I was unsure what to expect; however Barbara was quick to brief me and my two classmates on our tutor, Hoang, and the plan for the day.

Having piled into a taxi to take us to Hoang’s studio in District 3, Barbara, a bubbly Australian expat that has made Saigon her home since 2007, gave us first a brief overview of the history of calligraphy in Vietnam. We learned that, like so much in the country, calligraphy is a long established tradition that has evolved numerous times to reflect the cultural influences of invading nations. 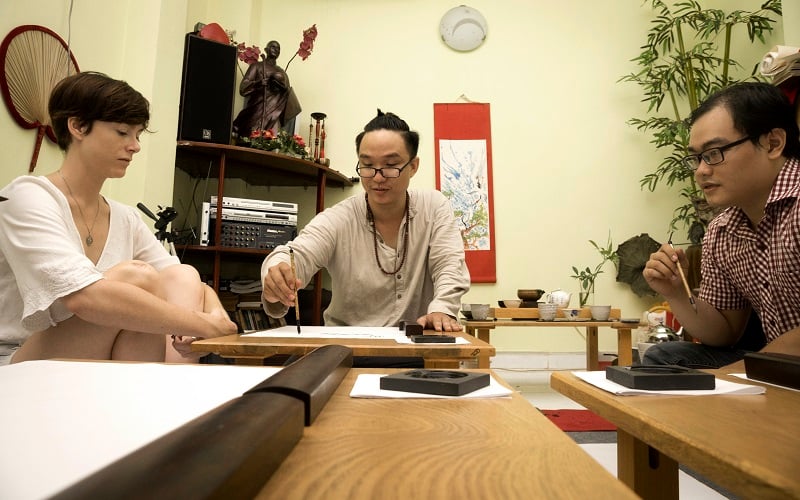 Transported initially from China over one thousand years ago, it has moved through ancient Chinese Han Script to the Vietnamese Chu Nom script, to the Latin-based Quoc Ngu that is used today. While some practitioners still use Han or Nom script for official or ceremonial purposes, Barbara explained that Hoang uses and teaches modern Quoc Ngu—a blessing for English speakers. She added that he had been practicing since the age of 12 and he is now 33.

Arriving at his unassuming studio, tucked away in a typical Saigon hem off Nguyen Thong, it was clear that Hoang takes calligraphy very seriously indeed. Seated cross legged on the tiled floor, we began with a traditional tea service in which our teacher carefully poured us each a cup of a delicious oolong blend while running us through some further history and theory. 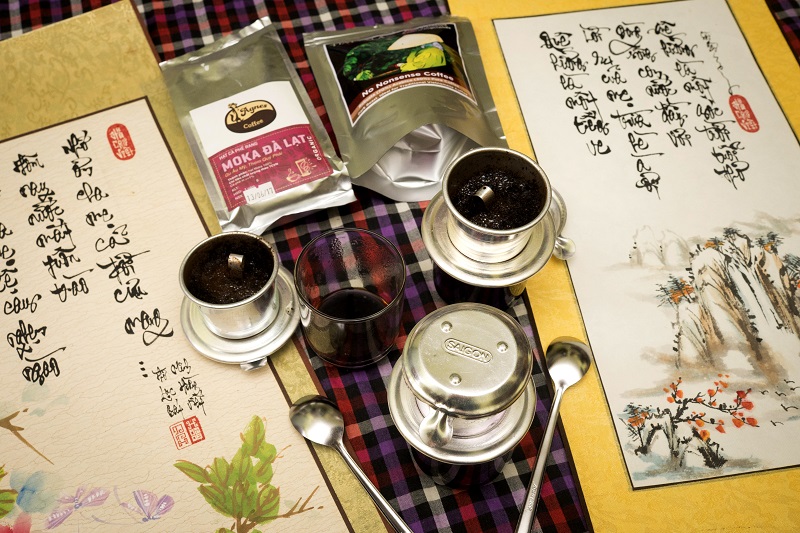 Rough With The Smooth

Bringing low level tables into the main studio, Hoang arranged the three of us around the room and handed out the tools of today’s trade: two sheets of white A3 parchment paper, two rectangular mahogany paper weights, an ink well and fine hair ink brushes. As Barbara had alluded to earlier, he explained that unlike in Chinese and Korean traditions, in Vietnamese calligraphy the rough side of the paper is used, rather than the smooth side.

In many ways this encapsulates the form, which is more focused on fluidity of movement rather than precise, uniform lines. As Hoang explained, the real work of Vietnamese calligraphy is the meditative thought process that comes before writing, which for him is a daily practice that culminates in perhaps just one or two words written in a few fluid strokes. “I am inspired by daily life; walks, visits to coffee shops, conversations with friends. I then use calligraphy to express my thoughts on these things and to de-stress. When you do calligraphy, you are out of the world,” he explained. 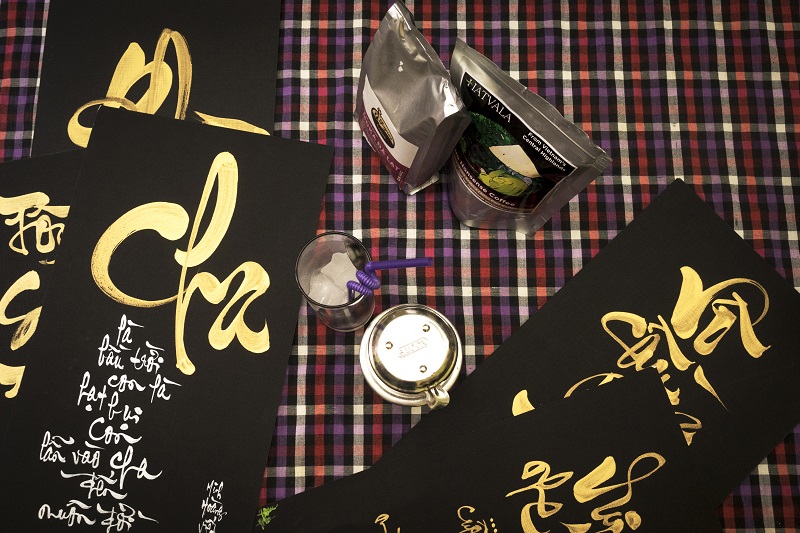 The Rule Of Writing

This is not, however, to say there are no rules to the Vietnamese tradition. Indeed, the English translation of the Vietnamese word for calligraphy—thu phap—is ‘the rule of writing.’ Most important is positioning: Hoang explained that we should be sitting crossed legged, backs straight, with our bellies 20 centimeters from the table. Our brushes should also be held precisely: directly in the middle between thumb and first and second finger, with the fourth and fifth fingers supporting.

He insisted that we take this stance before writing to ensure that we do not mess up our strokes due to having a bad posture. We had to take all we thought we knew about writing and stash them away, as the thu phap would teach us to make perfect strokes. In Hoang’s studio, precision was more important for an essay writer than speed, and we had to relearn writing the same way like a baby would.

We began by drawing straight, horizontal lines across the parchment—a surprisingly challenging task in terms of maintaining the correct pressure and distance for an even line. Left to right is the strict rule, while top to bottom is the only way to draw vertical lines. Soon we moved on to swirls—which I was more enthusiastic about but which, as ever, I was drawing much to fast with a deplorably slovenly posture. “You must draw slowly, breathe in and out, take your time—be calm,” Hoang reminded me. 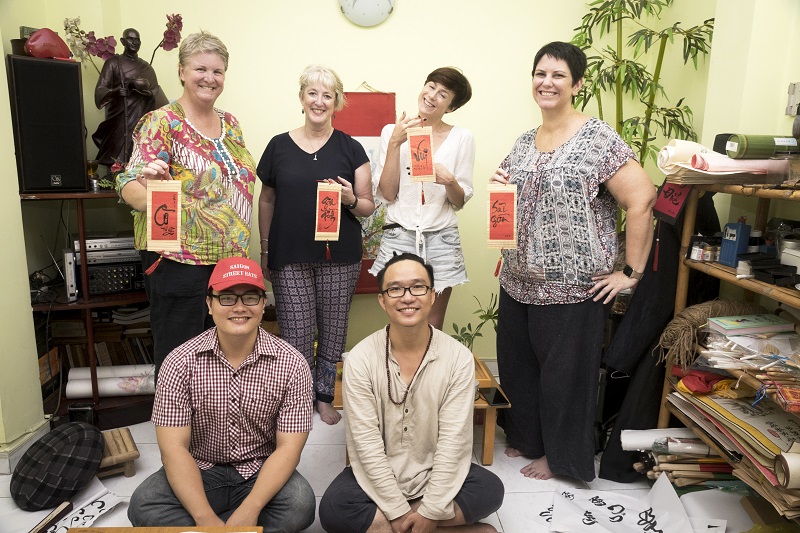 After plenty of practice we moved toward our goal: writing the word of our choice on a piece of red silk affixed to an ornamental bamboo wall hanging. While my classmates had opted for more ambitious words, such as “Saigon” and “gia dinh (family),” I decided to play it safe with “vui (happy).” After a few practice rounds on a piece of parchment, however, I confess that I decided I’d prefer to have something of accomplished beauty to take home, and so Hoang kindly obliged and drew it for me.

Observing his quiet distraction as he smoothly painted the word onto the silk in what seemed a single flourish, I could see immediately why Hoang had decided to dedicate himself to calligraphy. Like so many Asian art forms, both the practice and the finished product exude a peaceful, unassuming beauty that is accomplished only though dedicated, meditative practice. For the casual visitor, it is a fascinating process to observe and, in this case, a very relaxing way to spend a Saturday morning in Saigon.

To book your place on the Calligraphy and Coffee Trail contact Barbara at [email protected] The tour includes transport to and from the tour area, the calligraphy class, an English-speaking guide, coffee and lunch.

2 thoughts on “Write to Live”