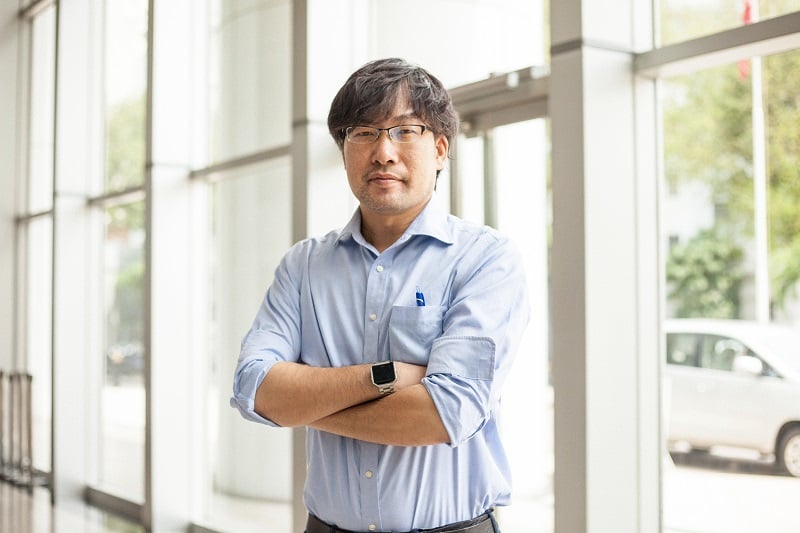 A pleasure doing business with you

A Japanese perspective on living and working in Vietnam

Japanese businesses are some of the best known in the world. From technology leaders Sony and Panasonic, to automotive giants Honda and Toyota, to consumer staples like Yakult; there are few countries that Japanese firms do not reach.

In Vietnam, Japan’s influence is perhaps felt most strongly on the roads: Honda being the national motorbike brand of choice. However, many other Japanese brands are just starting to make an entry into the Vietnamese market—one of the fastest growing in the world—making this an exciting time for new investors.

Dan Takehiko, a 43-yearold businessman from Tokyo, is part of this new wave of Japanese investment. As sales manager for legal consultancy &D Management and Partners, Dan advises Japanese firms setting up in Vietnam: from scoping-out the market to establishing operations and contracts.

Since he began at the firm six years ago, Takehiko has helped launch a number of successful Japanese companies in Ho Chi Minh City, including Ramen Bar Suzuki, Tru Nail and Beauty Japan and Agata Japan Cafe, and says there is strong growth potential for Japanese businesses here: “Vietnam has almost 100 million people and will soon be as populated as Japan. So many Japanese companies are looking at marketing to Vietnam and some are having success. In our ramen bar, which is quite expensive by Vietnamese standards, more than 50 percent of customers are Vietnamese.”

As the above suggests, price points remain an issue for some companies and the most successful are those that appeal to the broader Vietnamese market. These include Yakult and artificial flavoring manufacturer Ajinomoto—who’s MSG is in almost every packet of instant noodles in the country.

As Vietnam’s middle class begins to grow, Takehiko says that more brands will enter the market. He points to Sukiya as already enjoying success at this level, a fast food restaurant
where locals can buy a bowl of beef Gyudon (Tokyo’s favorite dish) for VND35,000, which he says is “reasonable” for most Vietnamese.

Takehiko says that another area seeing strong growth is technology. One of his clients is Japanese IT consultancy Grateful Days, which now has two branches in Ho Chi Minh City, and he says that many more Japanese IT firms are interested in launching into the Vietnamese market.

“There is more opportunity for many companies in Vietnam than in Japan. In Japan the competition is very tight and it’s hard to take market share. Outsourcing IT companies are
big entrants into the market, as well as developers and programmers working on apps for iOS and Android,” he explains.

One of the challenges for firms like this is hiring staff. Takehiko says that in Japan, most young people are naturally very good with IT as they are exposed to it from a young age, whereas here in Vietnam most competent programmers are university graduates.

This makes the average level of applicant for IT jobs quite high, but the supply low, which in-fact means that Vietnamese programmers command similar salaries to their Japanese
counterparts.

Another challenge of doing business in Vietnam is the difference in business practices and work life culture. “Vietnamese people are not used to reporting, communicating and asking for suggestions, which is normal for us. Often they want to work by themselves to find the solution. Sometimes that’s good, but other times not,” Takehiko explains.

Overall, however, he says that doing business in Vietnam is easier than in Japan, or even the US, with deals often made and projects completed much faster.

On a personal level he adds that his work life in Vietnam is also far less stressful than in Japan—where the demands on workers are so strenuous that there is a common term for
working yourself to death: “karoshi.”
“In Tokyo it is expensive to live in the city so most people live in the outskirts and you have to commute on packed trains. Station staff will push people into the train. And if the train is late for more than three minutes they will issue a late certificate you can give to your employer: it’s a weird culture,” he says.

He adds that there are also more opportunities to mix work and family life here in Vietnam, where it is common for him to invite his wife along to business dinners with new clients. In Tokyo he says this is unheard of, with a heavy drinking “boys only” culture encouraged.

“In Vietnam people try to get together more often and it’s easier to maintain a good relationship with your partner than it is in Japan. I think it’s easier to live here than in Tokyo: less stressful and happier.”

Takehiko says he may retire to Japan, perhaps the Tako mountain range just outside of Tokyo. However, in the meantime he is focussed on growing his company and being part of the new wave of Japanese investment here in Ho Chi Minh City.