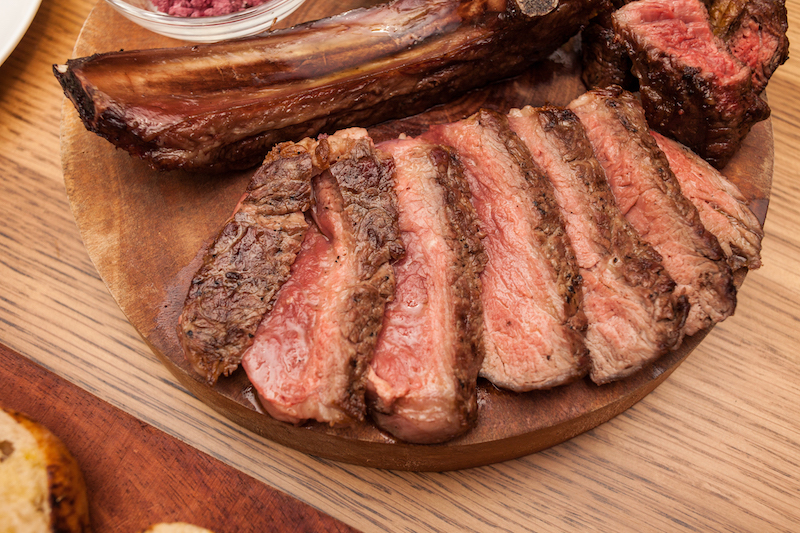 True to its name, MANZO celebrates all things beef

Oizumi foods is a big name in Japan—they run over 300 restaurants and izakaya pubs throughout the country—and they’ve been taking steps to set up base in Vietnam since opening Pizza Logic at Takashimaya back in 2016. Butcher MANZO & Craft Beer Bar (17/13 and 17/14 Le Thanh Ton, D1) is their next move, and it’s a brand new direction for Oizumi in more ways than one: while MANZO may be an established brand back home, Saigon’s version is something new, featuring a new menu, a craft beer bar, and introducing Japan’s popular aged beef to eager consumers here for the first time.

Manager Motoki Tanaka from Kobe, who moved to Vietnam only recently, is excited to front an eatery that has attracted a broad variety of customers since its grand opening on May 4th. “We’re selling steak, but we’re somewhat distinct from a steakhouse,” says Tanaka. “We’re more of a ‘nikubaru’ venue, which loosely translates as a ‘pub with meat’—it’s a concept that is quite well-known in Japan. Downstairs is more of a bar, but you can head upstairs if you want a meal that’s a little more formal. This is why so many different kinds of customer are coming. That’s what makes it interesting for me.” 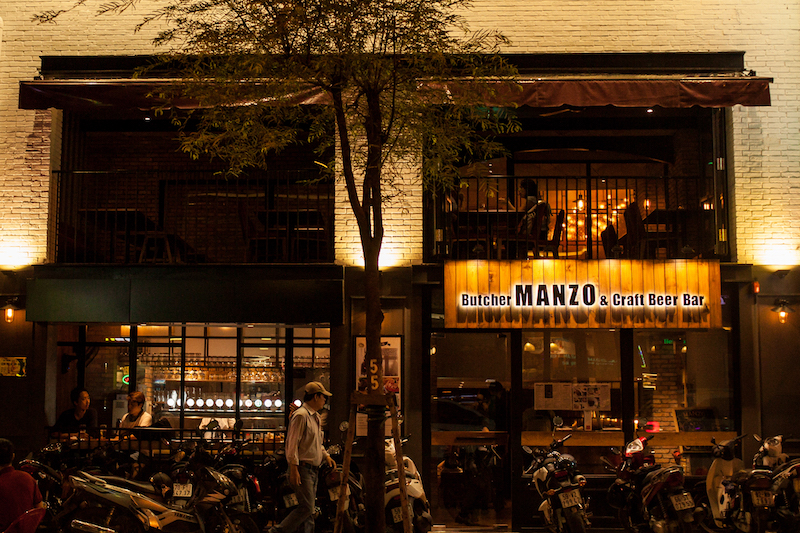 The pride of MANZO’s menu is the aged beef, prepared by Quy Nhon local Luc, the restaurant’s head chef, who worked extensively in kitchens in Japan and studied the technique with Oizumi’s grand chef. “The flavor of aged beef is totally different from the regular kind,” says Luc. “It often has a nutty hint, and has a richer aftertaste. The moisture within the meat is evaporated off over a period of time, resulting in a stronger, richer flavor.”

“It’s an old European technique,” explains Tanaka. “Before there was refrigeration, meat would be hung in cool caves to dry. That’s the origin of it. The technique was further developed in Japan, and it’s quite popular these days. So we decided to bring it to Vietnam also as it’s new in the market here. Japanese people are classically good at the finer details. Taking great care, doing things carefully, that’s our strong point. That’s what makes our beef such good quality.”

We visited Butcher Manzo on a warm Friday evening—the restaurant has a bright and highly visible street presence, located very close to the Thai Van Lung intersection. The downstairs bar area is intimate and features a gold-lit marble and brick motif—there are seven popular local craft beers on tap, including the rising star from Danang, 7 Bridges. Upstairs, the brick décor continues throughout the dining area, which is similarly modest in size, and features a private room seating six and a pleasant terrace area behind a glass partition for smokers. 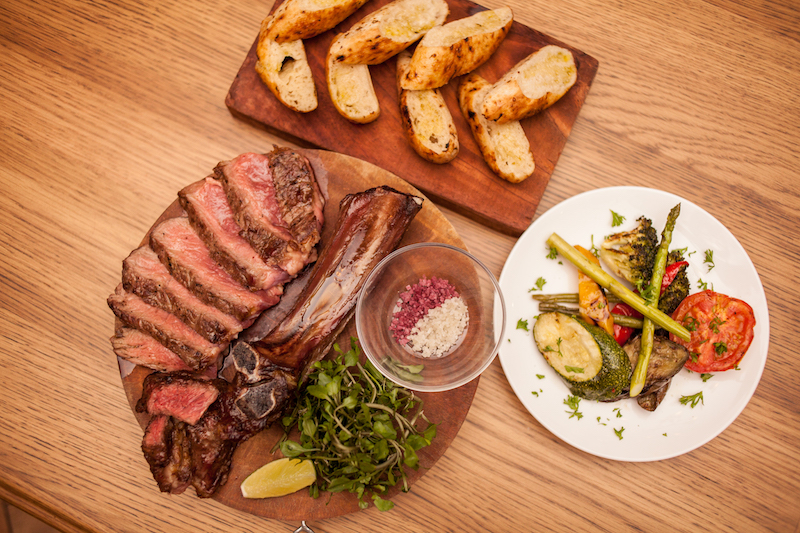 The menu is Italian-inspired (predictably enough: “MANZO” means “beef ” in Italian) and is certainly broader in range than you might expect for a dining area above a bar. MANZO’s concept does border on fine dining, and this is particularly evident in its star dish. We try a 500g portion of prime Sirloin beef steak (at VND1,600/g), served sliced and medium rare on a carving board. We pair this with the house red wine—a Casa Subercaseaux Chilean cabernet sauvignon (VND108,000/glass), an easy wine with a friendly character that pairs absolutely well with the steak. MANZO boasts a simple but well-chosen wine selection, with around 15 whites and 20 reds, all selected by a professional sommelier for this specific menu. The meal is rounded off with a couple of simple sides so as not to distract from the main dish—a tray of fluffy homemade bread (VND60,000) and a plate of BBQ grilled vegetables (VND88,000). The trick with aged beef is to serve it at exactly the right time. Our Sirloin steak was two-weeks aged, seeming very pink and tender and with a warm, wholesome aroma. We’d expected the meat to be relatively dry, but there was nothing to suggest by texture that the beef was anything over a day old—the taste, however, was absolutely richer and heavier with umami than is usual, making this preparation a must-try for steak fans.

MANZO represents a stepping stone towards even more offerings from Oizumi—Tanaka hinted that further concepts are certainly in the works—so diners in Saigon can expect ongoing adventures in localized Italian cuisine served with Japanese attention to quality to be launched in good time. In the meanwhile, take the chance to stop in at Butcher MANZO to see what your steaks have been missing.