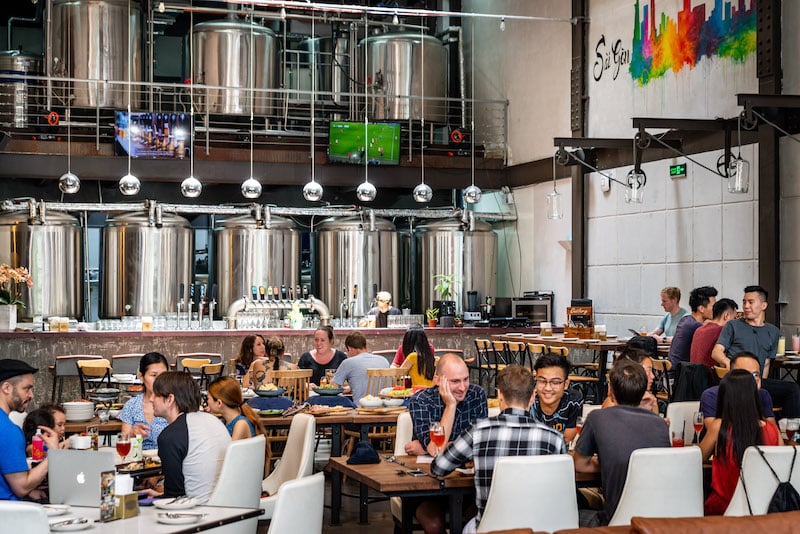 Already having cemented it’s reputation for their incredible selection of craft beers, however, East West Brewing Company’s (181–185 Ly Tu Trong, D1) food is not to be overlooked. We visited the huge industrial chic space that manages to avoid hipster territory with an upbeat soundtrack and high ceilings, natural light streaming in from the two-story windows and skylights from the outdoor beer terrace above. Backed by a neat wall of gleaming vats where the in-house magic happens, East West feels authentic in its approach to both its beer and its new bold lunch menu. 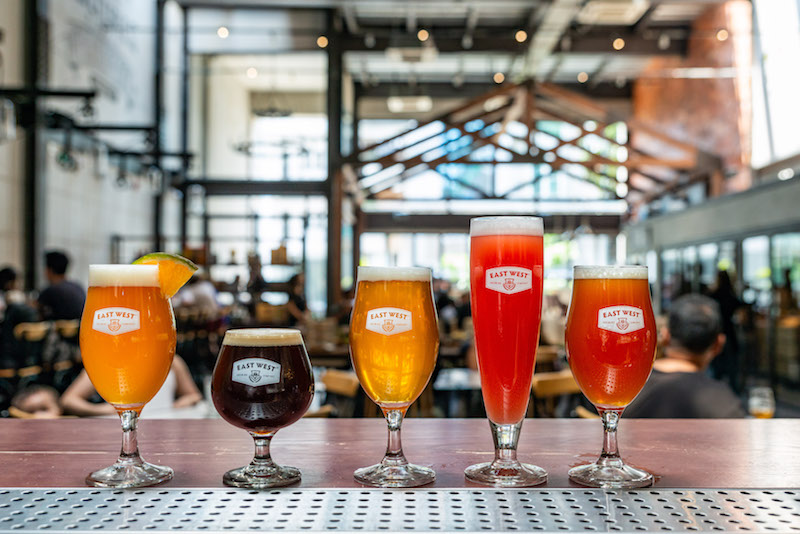 I ordered a large coffee vanilla porter (500ml, VND135,000), which recently won a Silver Medal in the 2018 Australian International Beer Awards (AIBA), before opening the food menu. The concept is to take two different food cultures—San Diego with its Southern Baja California influence, and Saigon with its traditional southern Vietnamese staples—and a few sumptuous twists. Thankfully, the prices are affordably still Vietnamese, from VND50,000 for soup of the day to VND165,000 for carne asada tacos or teriyaki salmon with broken rice.

Further adding to East West Brewing Co’s lunch experience, each dish is paired with a craft beer recommendation. Head Chef Matt Venzke explained how he and head brewer Sean Thommen worked diligently to create the best pairings, analyzing the ingredients and flavors of each, beer and food, until they found the perfect palate match. So if you have an eastern dish like bo kho (VND75,000), you’ll know that the Belgian Dark goes best, or if you choose a western dish like the blue cheese mushroom burger (VND155,000), then pair it with a Belgian Blonde. There are also quick, affordable set lunch options (appetizer, main and dessert, starting at VND175,000) available that are perfect for business meetings. 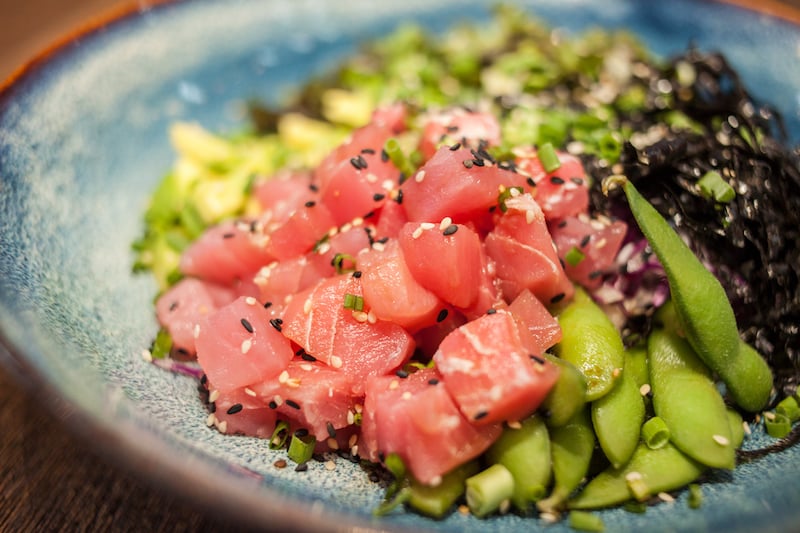 To start we ordered the tuna poke salad (VND130,000) as an appetizer. The tuna was fresh, the cabbage and mixed greens had a sweet, subtle dressing, and along with the edamame and ripe avocado it made for a light, healthy start. I’m not usually into seaweed, but it helped expand the complexity of the dish. After this came spicy garlic tiger prawn tacos (VND145,000). Spicy, but not overpowering, the large prawns were succulent, while the corn, pico de gallo and cilantro built an intricacy of piquancy. I was ready to revert to my collegiate days and have 10 more. 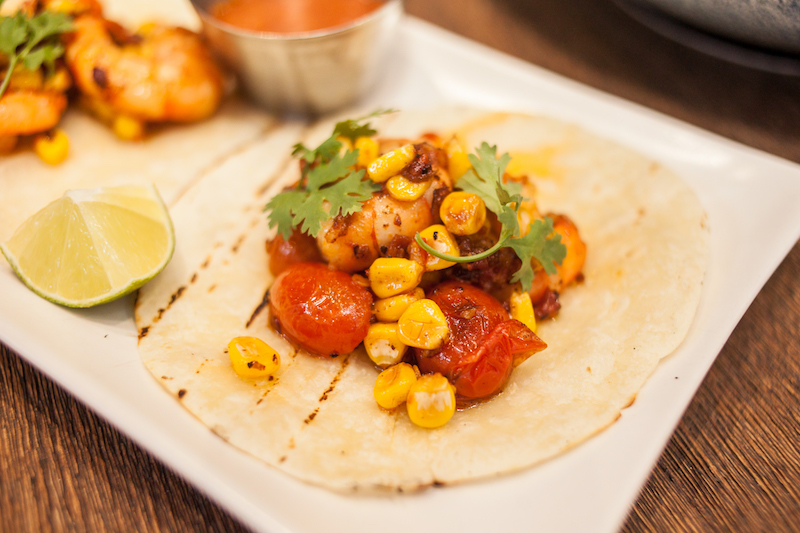 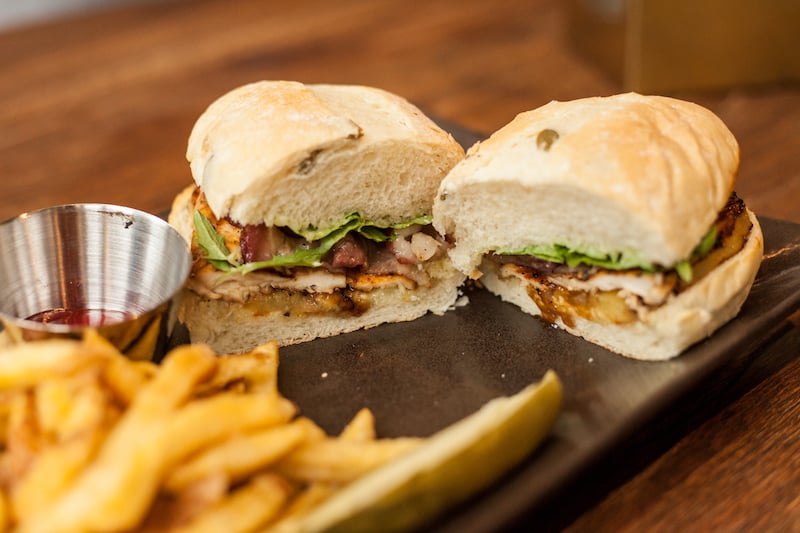 Rather than overindulge in tacos, we moved on to a grilled chicken teriyaki sandwich (VND130,000). The bun was soft and chewy, the chicken breast juicy and tender, the thin slice of pineapple a sweet complement, while the bacon and wasabi aioli layered in savory textures and tastes. I didn’t expect the french fries, which are hand cut and seasoned with a homemade spice blend, to be anything special, but they were remarkable. East West Brewing Co. may be winning awards for their craft beer, but for french fry connoisseurs out there, these have to be among the best in Saigon. 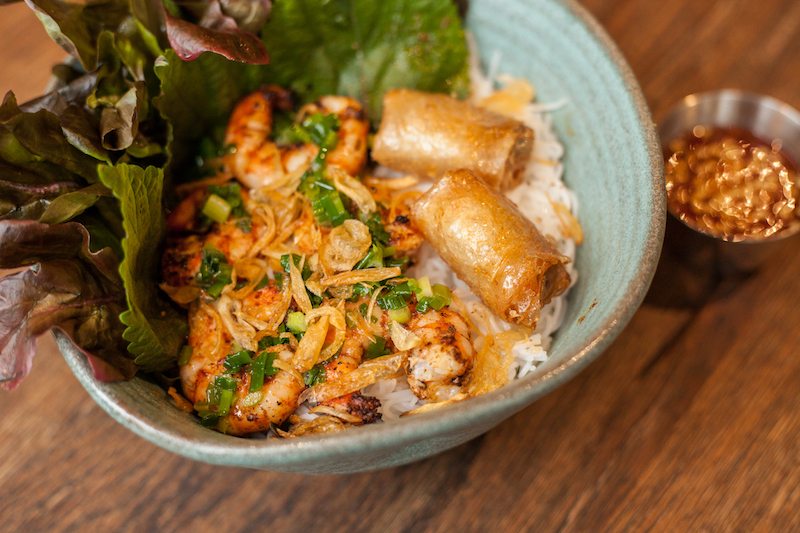 At this point we thought we’d move on to dessert, but Head Chef Matt came back over with King’s Flight (a sample tray of craft beer, 10 x 160ml glasses) and grilled shrimp vermicelli (VND125,000) to try. Usually I have bun thit nuong at Vietnamese restaurants, it’s a good measure for me. While many base ingredients were similar to what you’d get in a Vietnamese restaurant, East West Brewing Co’s large grilled prawns, which are completely peeled, were such a delectable alternative to pork.

I’d originally had my eye on the cookie ice cream sandwich (VND130,000), however I simply didn’t have any room left, and there was still the sample tray of craft beers to get through. But with a choice of ice cream flavors sandwiched between homemade cookies, an apple slice side and drizzled with a beer caramel sauce, I’ll be returning to try it along with a few other items I couldn’t get to, like the chicken tostadas (VND125,000) or the sautéed beef with mustard greens and kale (VND165,000).

While a lot of people head to East West Brewing Company for their artisanal handcrafted beer, the food is definitely a co-star, not the supporting cast. They also have an extensive dinner menu (visit their website for the full list) and on the weekends do a brunch from 11am-3pm called Kegs ‘n Eggs, where VND500,000 gets you a brunch buffet and for an extra VND350,000 free flow craft beer. Additionally, they host brewery tours, and at times have live music and other exciting events. Visit www.eastwestbrewing.vn for more info.