Those who are already taken with Japanese cuisine will find plenty to be impressed with at Kasen (101 Le Thi Rieng, D1), a new venue serving up a contemporary sushi you will rarely see in Saigon.

Kasen’s menu offers next-generation sushi, a pared-back, subtler form of the popular dish than you’ll generally otherwise come across in this city. Kasen’s sushi constitutes a return to essentials— focused on warm rice and soft hunks of cold, melt-in-your mouth fish, forgoing flavor silencers like soy sauce—while at the same time drawing diners into a studied contemplation of each morsel’s inherent tastes and textures. This is Japanese food for thinkers, those who are inclined to let each bite linger on the tongue a moment longer than is strictly necessary. 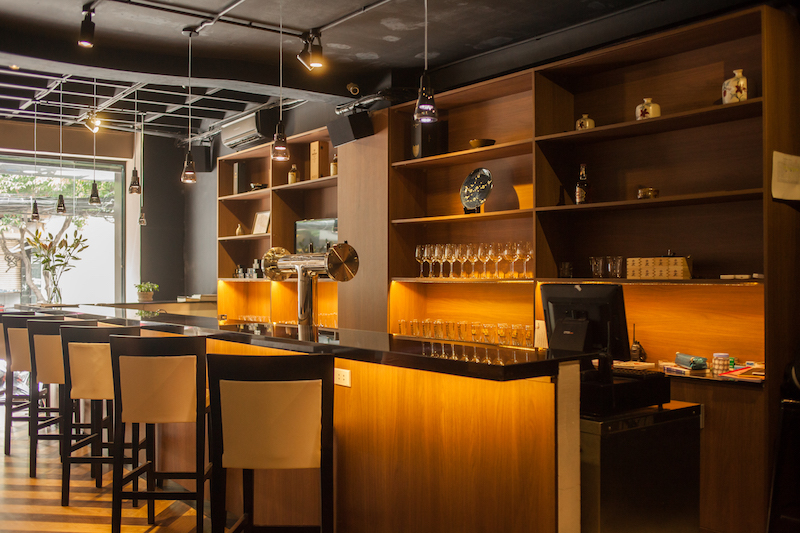 “There’s a reason for everything we do here,” says the restaurant’s manager Daniel Ta, who remains on hand throughout our meal to illuminate each selection. This is the standard mode of service at Kasen; the sushi set we select isn’t served up dramatically on a single platter, but instead brought out one by one and explained as we go. The  sequence served is carefully-selected by the chef to form a journey of flavors that also ensures the rice comes out warm, and any seaweed wrap doesn’t go soft before you eat it. Our meal begins with a couple of choice starters: a plate of beef cuts with wasabi (VND120,000) and an eggplant miso (VND40,000). The beef, garnished with crispy leeks and drizzled in a wasabi blended with with white onion, is strikingly set off by a special ponzu salsa, while the hot eggplant—we’re advised to slice it in half so as not to be scalded by the core—comes with a sweet miso sauce and sesame seeds that gives it a flavor reminiscent of Vietnamese mach nha malt sauce. 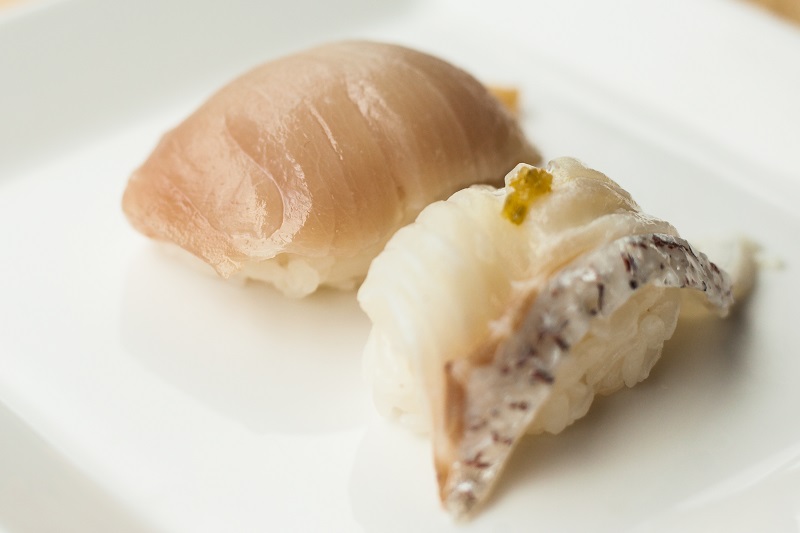 Before being guided through our supreme omakase set (VND880,000), we’re offered a more-than-generous pour of fresh sake (VND220,000 per glass). This is a strictly seasonal drink served cold, not like the classic aged warm sake that contains preservatives and can keep for a year. Its rather ostentatious name (“shichiken junmai ginjo daiginjo”) is in keeping with the serving method, wherein a glass is placed in a small wooden case and poured to overflowing until the box too is full—denoting good hospitality. It’s a refreshing drink, more like a light white wine than anything else.

As we dine, Daniel offers some insight into the owners of the restaurant—which is essentially the creation of chef Shinji Murata, a Fukuoka native who made a career in LA serving Japanese cuisine for 45 years; he is the former apprentice of sushi master Kazunori Nozawa. Shinji’s iconic LA restaurant “Hiko” is a critically acclaimed venue that is still open today; it was there where Korean-American Chu Kim befriended the chef and became a loyal customer, going on to invite him to Saigon a while after moving here himself. Shinji fell in love with Vietnam and eventually “retired” here, and Kasen is their joint project—the restaurant’s name means “hermit who collects flowers”, but it is in fact named after the restaurant where Shinji met his wife. 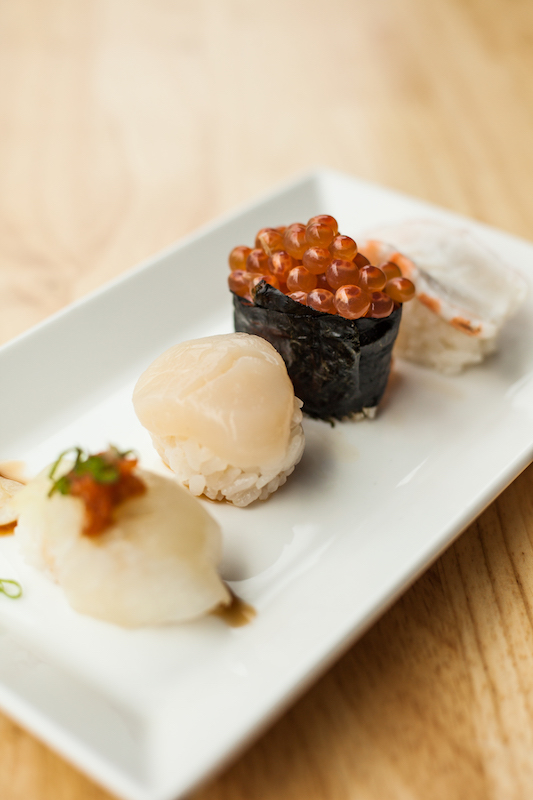 As the omakase offerings begin to arrive in sequence on small triangular serving plates, we’re presented first with a white tuna sashimi with garlic ponzu sauce, which has a creamy consistency with delicate flavors set off by a yuzu citrus fruit seasoning; we’re then given choice pieces of red snapper and yellowtail on rice. The latter, we’re told, should be seasoned with a little soy sauce, although it’s one of the few dishes that does need it—as Daniel explains, part of the restaurant’s mission is to present a form of sushi that resists being drowned in soy, as is the general bad habit. Soy or no soy, the flavor in the rice itself is immensely wholesome—although being warm and fresh, it’s designed to be handled with care and can disintegrate easily between clumsily-thumbed chopsticks. Ginger is on hand, it should be noted, as a palate cleanser between dishes rather than as an after-the-fact garnish plopped onto the rice before chewing. This, we are told, is the more correct usage of this popular condiment. 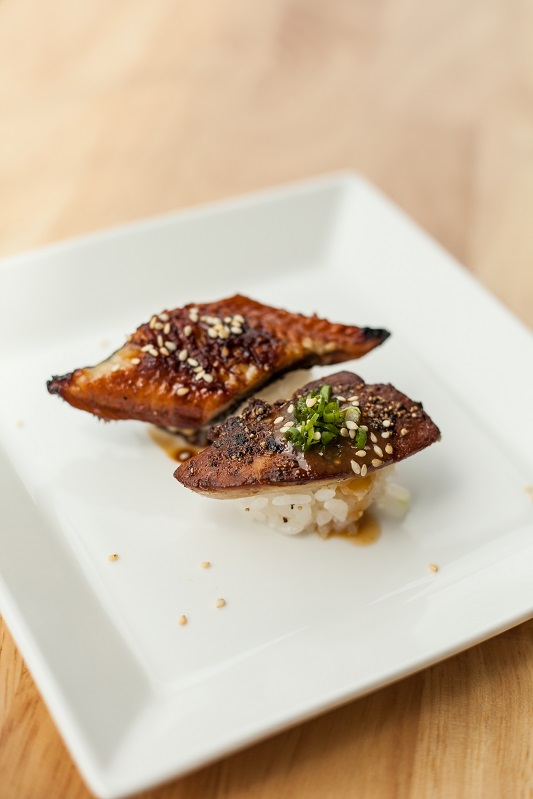 More sushi arrives—a salmon nigiri with lemon, white seaweed and sesame followed by some delicate white tuna with garlic ponzu: again, soy is not recommended. Kasen’s signature sushi is topped with a slice of foie gras that smells magnificent in its coat of sweet miso, sesame seeds and onion. A crisp seaweed hand roll of blue crab is followed by halibut topped in daikon radish, green onion and ponzu, infused with a flavorsome dashi stock; eel is served with an eel bbq-esque sauce, and the scallops invite particular concentration as you chew, lest you miss the more delicate tastes beneath. Dining as Kasen is an education as well as a fine meal. Serving staff talk guests through their dishes almost as if in earnest to draw their attention to their finer points. Go along with the lesson and pay attention to each bite; it’s a chance to broaden your palate and experience sushi as you’ve never tasted it before.