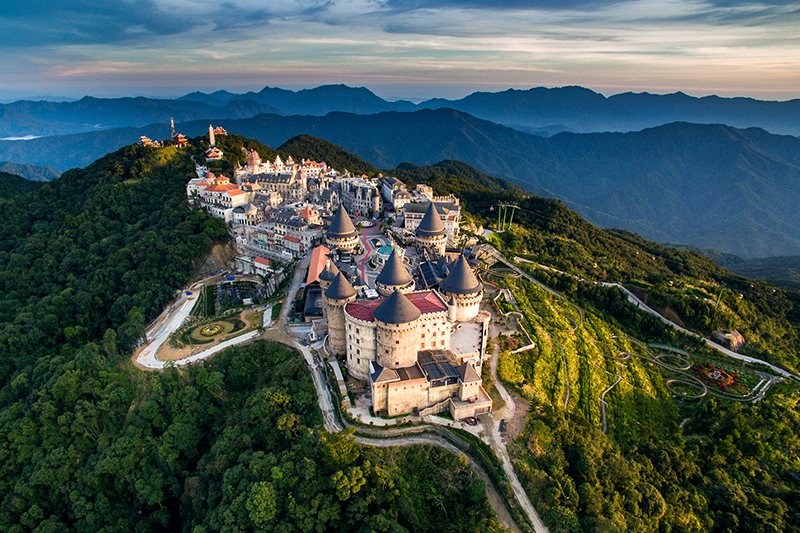 There are an endless number of places to stay in Danang, and you need no help from us finding them. “A place to stay in Danang” is one Google search away. But, what if you wanted a special experience? What if you wanted to escape to a private beachfront laid before a charming network of villas? Or disappear into a misty evening inside of Bana Hills with someone special? The mountaintop castle Mercure Danang French Village Bana Hills (An Son Hamlet, Hoa Ninh Commune, Hoa Vang, Danang), offers just that. They aren’t just places to stay while you’re visiting the place; both offer more than enough to be the place. 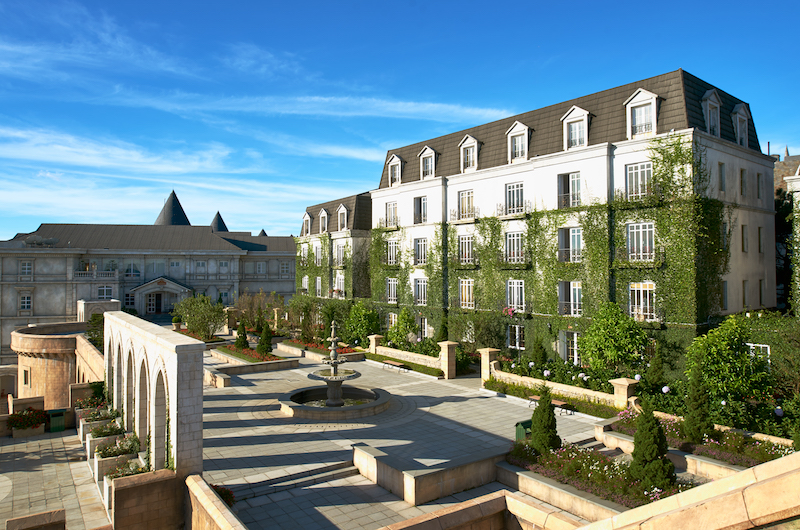 Nested within the European architecture is the Mercure Danang French Village Bana Hills resort. This is a 470-room premium hotel lovingly made with designs that extend the outside French village’s old world charm in an aristocratic abode. Darkened wood and stone amid the golden glows of interior lights. The sense of being in another time pervades the entire facilities, from the hearth in the lobby to the suit of armor keeping guard that greets guests in the hallways on the way to their room. Inside, each of the rooms are dressed in wine colors: a purple chaise lounge in each room, cranberry red pillows are perched on a white duvet on the bed. Darkened wood beams span the length of the room’s high ceilings. 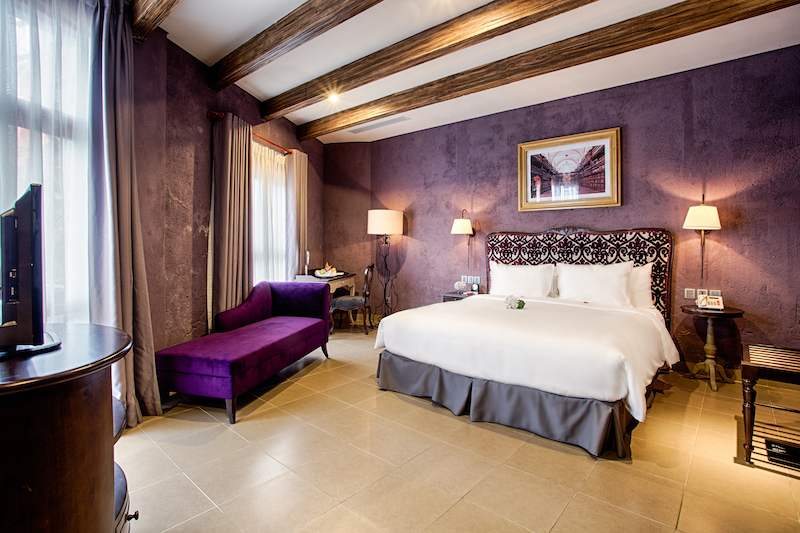 The crown jewel of the Bana Hills resorts are the 35 VIP rooms. In addition to bearing the name of notable French figures—one is named after Les Miserables author Victor Hugo and another to Gustave Eiffel, whose eponymously named tower is today world famous—boast the most space of the resort’s room selection and a private balcony that overlooks the hustle and bustle of the world down below.

Staying at the mountaintop village and saving the commuting time necessary to drive to the resort from Danang—at least an hour one way—means you can take Bana Hills in a more relaxed way and, say, have a relaxing massage at Mercure Danang French Village Bana Hills’ spa. Bana Hills is not big but the only way to get around is by foot. Your feet will thank you when soaked in the spa’s lemongrass and lemon bath. 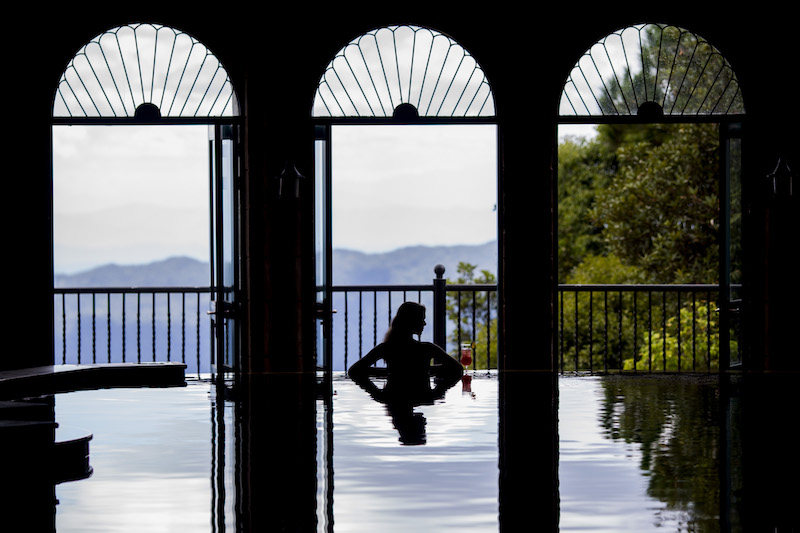 If there’s no rush, then you might even have time for a nice, leisurely paced meal at L’Etable, a horse stable-themed restaurant connected to the resort that serves a menu of Vietnamese cuisine alongside including a generous, tender leg of lamb in a red wine sauce, which is served with zucchini tomato and carrots. The meal is hearty with delicate flavors that would characterize a French dish. 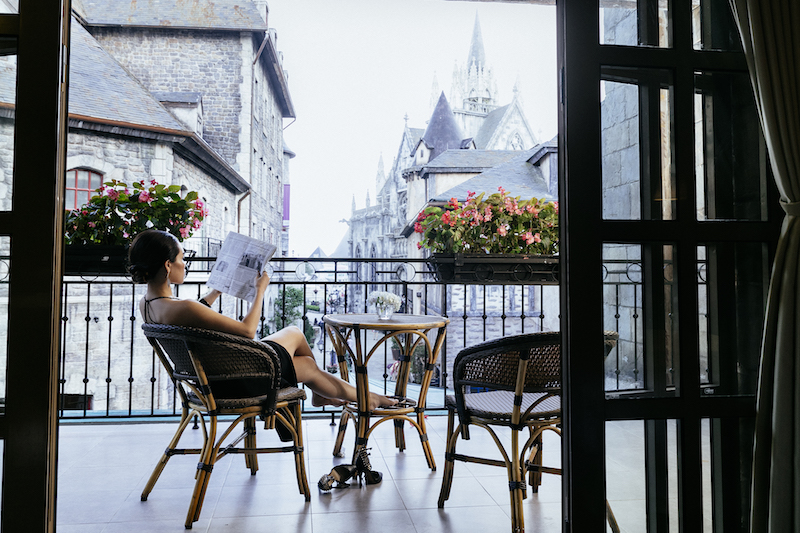 If there’s no need to rush around Bana Hills, you can spend some of the time relaxing and waiting for the sun to go down. As the tourists retreat to their hotels back on firm ground, Bana Hills’ takes on a quiet, novel majesty like a theme park after closing. Bana Hills by night is special for many reasons, not the least of which is that during the evening with fewer people there. You can really take in the depth of involvement that the site’s builder’s invested in to the place. The place at night has a distinctly quaint feel. It’s not just the temperature, which at night may dip below 20 degrees celsius. It’s also the hushed, precious feel of the nearly-winter nights, something you might miss if you’ve spent too much time in Danang or Saigon but will immediately recognize if your home country has a winter with quiet nights.

You might have forgotten the feel of a crisp breath of winter air, the pleasant chill of winter weather on the cheeks. Bana Hills at night is where you reconnect with the intimacy of going on a nice evening stroll. The only cars are the ones for decoration filled with flowers around the French villa’s central square standing silent like guards around the public spaces.

It’s the height, it’s the rare moment of silence and darkness that defines the area. If you live in one of Vietnam’s big cities, it has probably been a long time since you experience the silence and dark of night. The orange glow of security lights are absent from the nightscape in the Bana Hills mountains as are the honks, the calls and the night walk under the company of a canopy of stars seemingly made brighter by Bana Hills’ nearness to the heavens and the sounds birds not yet known calling for one another through the darkness.

Under the cover of darkness, sneak in to the resort’s pub La Taverne for a nightcap. Choose from one of the pub’s selection of European beers and imbibe under dimmed lights that make mock oil lamps casting a warm amber glown under the low vaulted ceilings of the pub’s vaulted arches. The low clearance gives is the effect of a European pub. The only giveaway that you’re in Vietnam is the nightly karaoke held inside the bar.

The intimacy of chilly nights and the romance of a getaway—that’s the type of stuff made for the very intimate, those with a world made up of just each other.