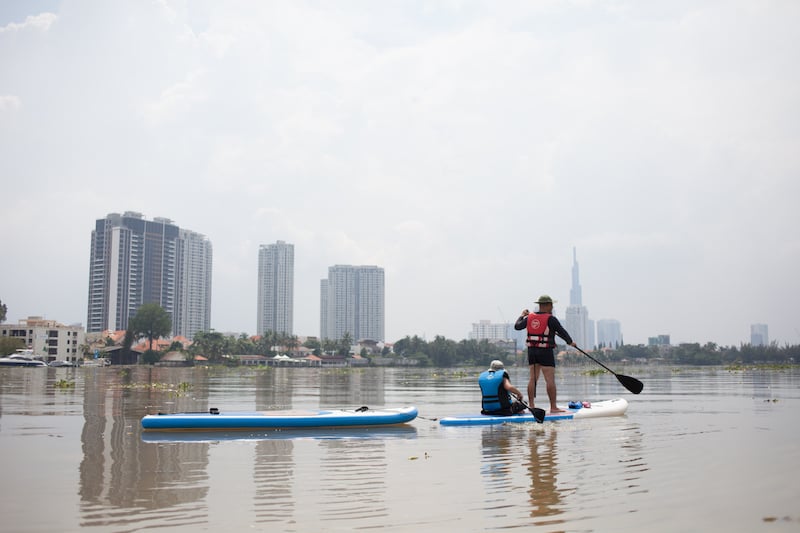 Stand Up And Wave

When I moved to Saigon in 2017, one of the first things that struck me was the river: and not in a good way. From my balcony located close to Bui Huu Nghia in Binh Thanh District, I had a bird’s eye view of that particular section of the city’s waterway, the smell of which would knock me sideways when the wind was blowing the wrong way.

As such I was more than a little hesitant when I was tasked with trying out one of the latest sports to hit Saigon: stand up paddle boarding. All the rage in Australia and increasingly Indonesia and the Philippines, paddle boarding involves standing upright on a wide inflatable board and yes—you guessed it—using a paddle to make your merry way. Think of it as a cross between surfing and rowing. 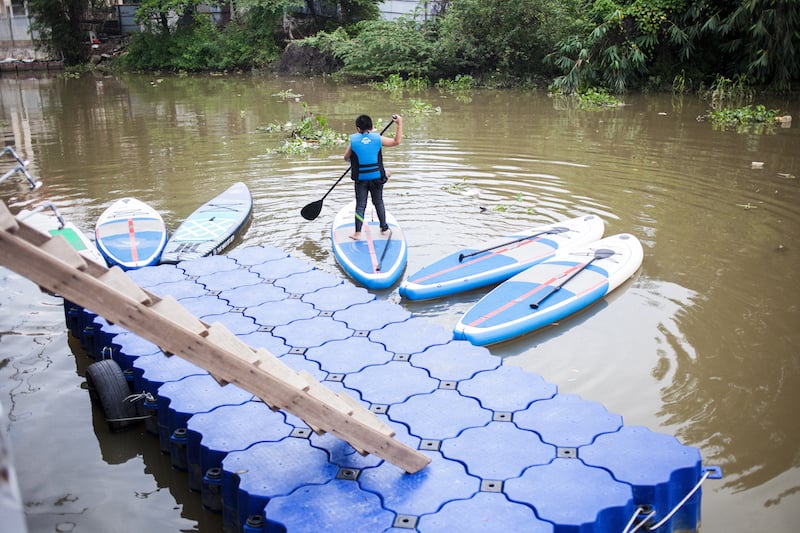 While the danger factor of this sport is effectively zero for those doing it under supervision on a city river, my chief concern was what might happen to my skin should I fall in the water. And with my center of gravity sitting about six inches to the right, this was almost certain. However, chatting with Khoi, one of the founders of Saigon Paddle Boarding (SPB), helped to put my mind at rest.

From SPB’s idyllic launch point at a local riverside restaurant nestled in the heart of Thao Dien, Khoi explained how he has seen the river improve over the years: “Around 15 years ago there used to be a cement factory very close to here and the river was really very bad. Since then it has improved a lot—around here anyway. Of course it’s not super clean now, but it’s clean enough to do this and, you know, the important thing is that we get people engaging with the river. People won’t care about something until they’ve touched it.” 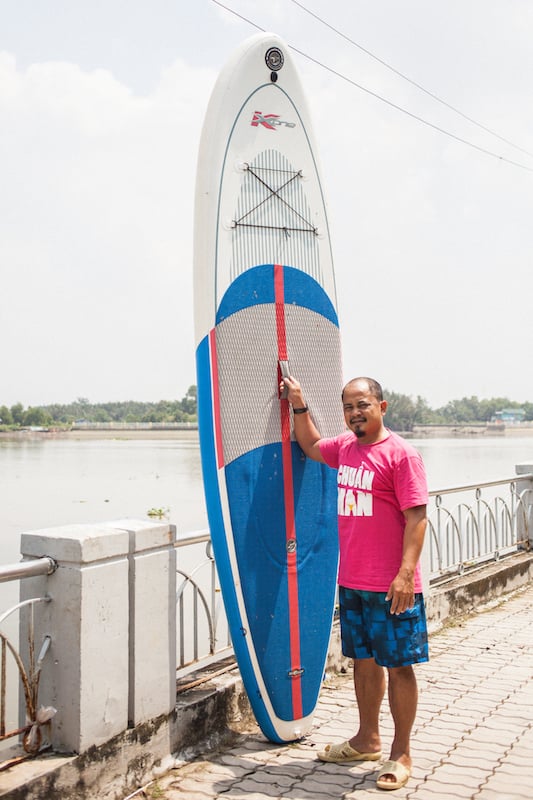 Khoi is passionate about nature, and about getting Vietnamese people involved in it. He has operated his tour company Group Five Adventure since 2015, with which he takes groups of Saigonese trekking and camping into the jungle of southern Vietnam. With a smile he recounts how many of the people on these trips, especially the children, had not seen a sleeping bag before their trip, let alone a cow.

A former gymnast, Khoi is also passionate about exercise, and is equally keen on stand up paddle boarding for its rigorous cardiovascular qualities, as well as its proximity to nature. In-fact, just before I hopped on the board with my guide Le (or Russell, as he prefers to be called) we watched Khoi paddle-in with obvious difficulty, red faced from fighting the tide. “Woah! It’s hard work today!” After checking my worried glance with a reassuring nudge, however, he added: “But it’s good! Good exercise. We need to get more people exercising. Especially kids—kids today sit around a lot, at school or playing video games. It’s not good for them. And not as much fun as doing a sport like paddle boarding. You’ll see!” 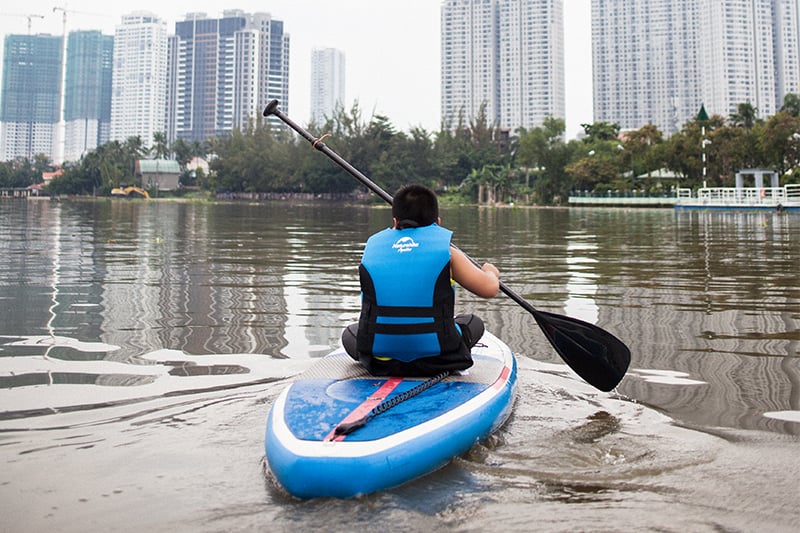 After securely fastening a life jacket, I tentatively climbed onto my board, held steady by Russell’s experienced hand, and braced myself for the fun. It had been decided that I should set off around 5pm, one of the most popular times of the day for people to take to the river with SPB so as to see Saigon’s spectacular sunset from the water.

With a wave of relief I discovered that I would essentially be a passenger on Russell’s board and so, crouching low at the bow, we set off. My guide explained that he had only taken up paddle boarding a few months ago after seeing one of Khoi’s advertisements on Facebook, however he was soon hooked. After taking one of SPB’s 10-hour training courses he is now a qualified instructor.

“I’m a career musician so I’ve never done a lot of sport—only some soccer, but I’m not very good! But when I read about paddle boarding I was really interested. Now I do it almost every day. I completely forget about the time when I’m doing it. Once I ended up so far up the river I had to take a taxi back to the center with the board!”

Russell’s skill on the board was clear, especially when a passing boat sent a few rolling waves our way—which he navigated with ease. As we ambled lazily down the river I tried my hand at padding too, and within five minutes found that it was—indeed—very good exercise. When I finally plucked up the courage to stand on the board I also found that it was much easier than I thought and— miraculously—stayed upright and dry the entire time.

As Khoi predicted, I had a lot of fun paddle boarding, which is indeed an accessible sport for almost anyone. The most enjoyable part of the journey, however, was being on the river. As I watched the life of the people on its banks—from the guards of the million dollar houses in Thao Dien to local men hazarding a quick catch on the banks further down, I was filled with a new appreciation of Saigon. Watching the orange and pink sky fade into darkness from the river’s softly churning water I felt very, very grateful to be there. It is, as Khoi puts it, ‘clean enough’ for that.