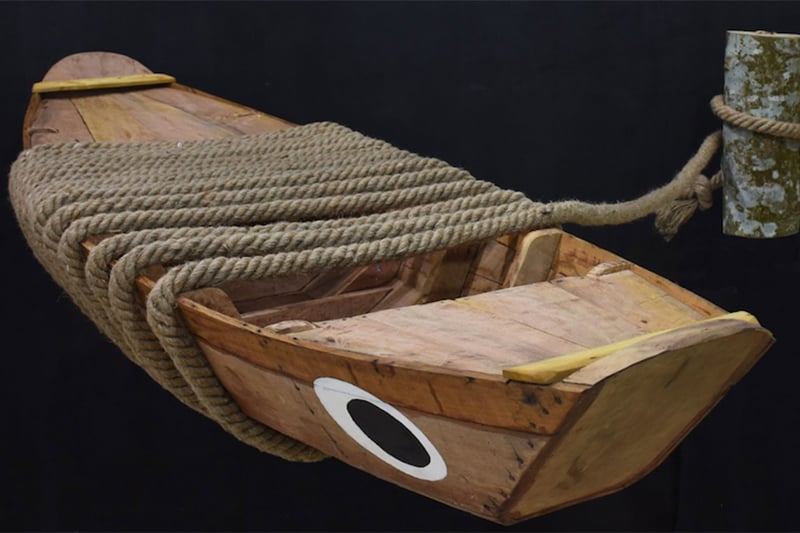 Trapped By The Boat

Questioning when to protect and when to abandon “tradition”

As a last concluding project in the Australia International School’s international baccalaureate arts program, students must show at the student art show that ends the school year. A substantial portion of their grade, the International Baccalaureate Visual Arts Exhibition is a serious visual arts showcase that draws on the student’s best work in a variety of mediums: painting, sculpture, photography.

For the show this year, the school converted one of their hallways into an exhibition hall. The spare, near brutalist architecture style of schools filled with art gave the place a prestige like a formal gallery. The massive boat you would have seen dry docked in the middle of the exhibition hall may have broken the spell. The piece gives rise to more questions that it does understanding: Why a boat? Why is a boat in the middle of hall? And, perhaps the most pressing question to any artistic experience, what does it all mean?

We’ll start with the last question: it means a lot of things, according to the artist Yen Chi Huynh, who is currently studying in the US. The first meaning is perhaps the boat’s oldest, most culturally significant meaning, the boat as a home base. “In Vietnam, [the] boat is a part of their life,” says Yen, explaining that some Vietnamese live waterborne lives physically centered around the boat as a home rather than a house. “They were born with it, raised with it, live with it and I believe if they are asked, they would call the boat home.”

The other meanings are more recent and particular to the artist. In the broader stretch of the human narrative, the boat is a kind of novel and powerful technology, an important asset to the earliest people that settled Vietnam facilitating trade and travel. But for waterborne Vietnamese—a broader analogy to the community’s attachment to tradition and convention—Yen’s dry boat offers a different reading of the tool: “Their whole life, they are ‘trapped’ by the boat. It is a paradox because boat is to take people away, from [one] place to the other, but these people, are trapped by the boat their whole life.”

Yen did not make the boat herself. The boat was purchased for her by her teacher at the school. Yen took the boat and painted two large eyes on the hull as you’d see on any large boat floating in Vietnam. She provided the final visual arrangement, which included a rope and a pole serving as a mock dock. 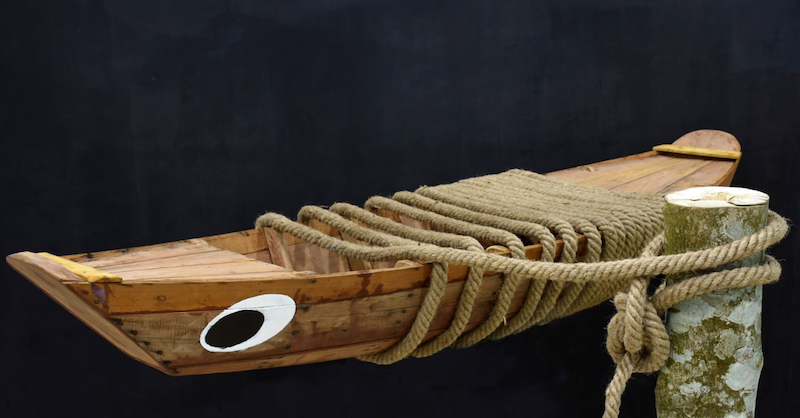 The practice of painting eyes on boats to ward off both real and imagined dangers dates back to as far back as ancient Egypt, but the practice migrated to Southeast Asia throughout time and is observed in Laos and China as well as Vietnam, as was documented by Vietnam Heritage Magazine in 2013. The magazine reported that the US Department of Defense had investigated the practice in the late 1960s and found that a legend originating in Nha Trang may hold some explanatory power for this phenomenon. According to these US researchers, the Vietnamese were telling a story about an ancient king who ordered large sea serpent’s eyes tattooed on his subjects and painted on his boats because many were being mauled by sharks in sea travel.

For Yen, the eyes are uniquely Vietnamese and helped anchor her boat firmly within the world around her. “I painted the eyes of the boat to make it look similar to the Vietnamese traditional boat design. It represents Vietnamese society,” she explains.

In the lense of modernity, in which nothing is magical and the only behemoths in the sea are the battleships jockeying for power in contested waters, the tradition seems novel and even cute. It’s easy to walk away with this kind of impression seen through the modern lens. Even the US army’s reading of the phenomena reads a bit romantic.

It’s there, the rosy view of all traditions, and resisting this that Yen’s piece is most active.

“This idea was inspired when I saw some images of floating markets in Vietnam. They really caught my attention, how people just live on it their whole life,” she continues. While beautiful and important, “I think it reveals a sad truth is that not everyone could access to the modern world. Most of the children in those families only finish high school, even before that, school is not their focus. They learn to catch fish and make a living in at an early age and soon, they [quit] education.” In allowing people to live this way undisturbed, “[m]any considered it as how we protect the beauty of our culture and tradition, but is it? Is that the only way? The [lives] of these people [are] repeating through generation, that is what I know.”

Of all her pieces in the show, Yen remembers the boat got the most attention of any of her contributions. Yen showed her boat with an artist statement explaining much of the above. With all the context, she says the piece was upsetting to some people. Some of the piece’s critics asserted that her generation should do more to protect a traditional Vietnamese lifestyle like this one, she recalls. Still others appreciated having the practice reframed by someone who could speak about it meaningfully. If there is an edge to the piece, Yen says it’s pointed at thoughtless adoration. “It is to some extent an ironic image of how the society just considered it as a beautiful tradition but did not put more thoughts into it, about [its] impact one’s life, the development of the countries. The main reason of the idea is allowing people to have a different perspective on what they are considering as beautiful or a special thing about our country.”