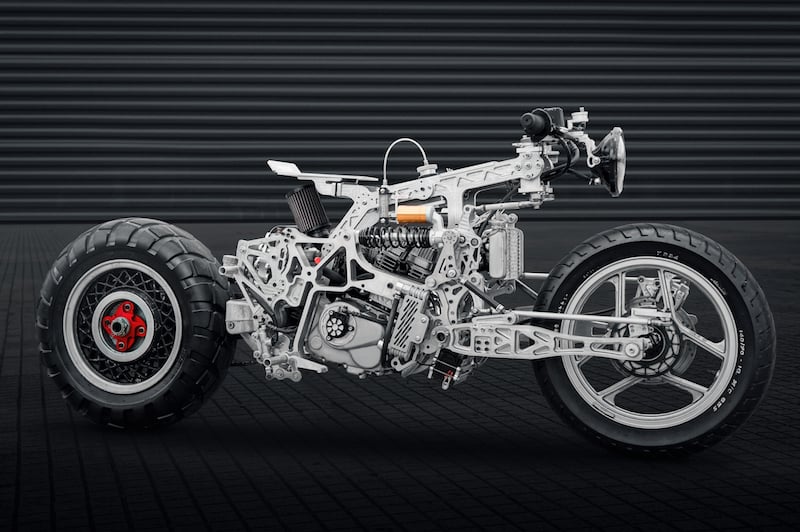 Huy Mai’s custom built bike—dubbed the Cubu (pronounced “koo-boo”)—is a perfect demonstration of how two people can look at the same thing and see something completely different. To the casual observer, the beastly custom bike can look something like Optimus Prime, an unapologetically tough-looking machine that eschews the common shell that covers bike parts and instead boldly displays an exposed mechanical skeleton carrying the organs of a motorcycle.

To Mai, this hand-built bike that he taught himself motorcycle building with, is family. 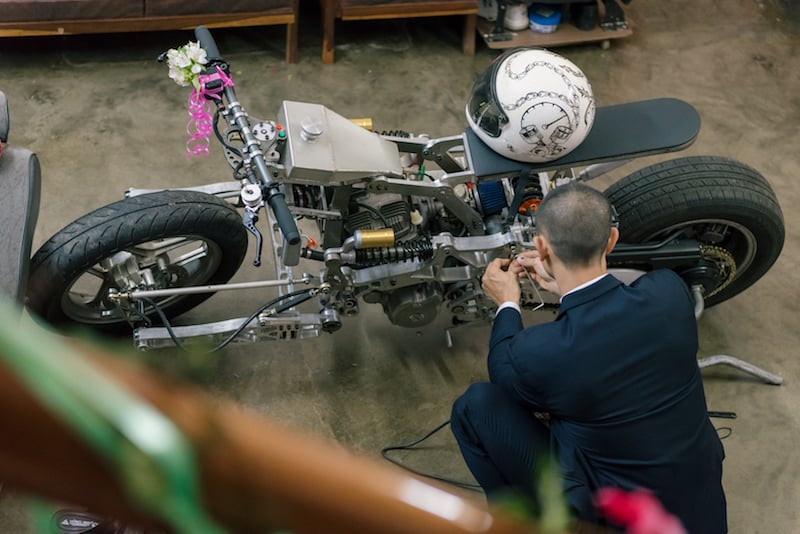 “Brother” is the word he used when he was coaxing his bike on his wedding day. “I said ‘Cubu, be good. Be a good brother,’” Huy remembers. The bike would break down about two days afterward he adds with a laugh. On his wedding day, Huy and his wife rode at the head of a nuptial motorcade. His wife rides pillion in a red dress holding her wedding bouquet while Huy drives. His handsome black suit is an interesting contrast to the brawny, silvery Omega frame of the bike.

Describing the photos, Huy again uses the familial name he’s given his bike. “I wanted my brother to be at my wedding,” Huy explains. For some bike enthusiasts, the relationship with their respective machines can take on similar conversational tones. It is not a bike, but their “baby.” They may indicate their bike saying, “There she is.” 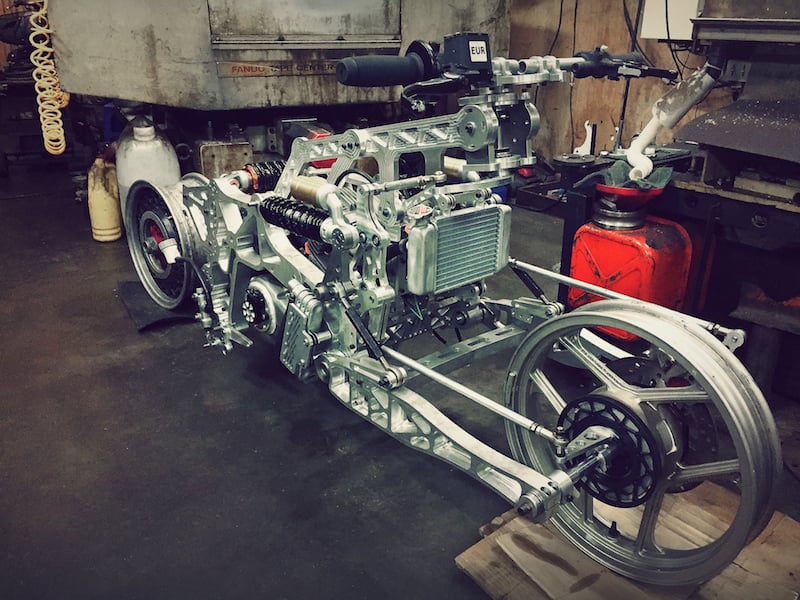 This is very different from Huy’s relationship with his bike, which is more literally fraternal. Cubu is short for “Malicubu,” a nickname for Huy’s late younger brother who died suddenly in a motorbike accident late one evening in 2014. While riding through a street in District 3, his 24-year-old brother Mai Ngoc Anh was struck fatally by a taxi driver.

Huy conveyed his brother’s body to the family’s home in Bao Loc. He remembers that it was the first time he’d seen his father—a self-taught mechanical engineer who’d survived the worst economic periods of the American War—cry in public. “I didn’t know what to do. I left everything in Saigon and went back home [to Bao Loc],” he says. 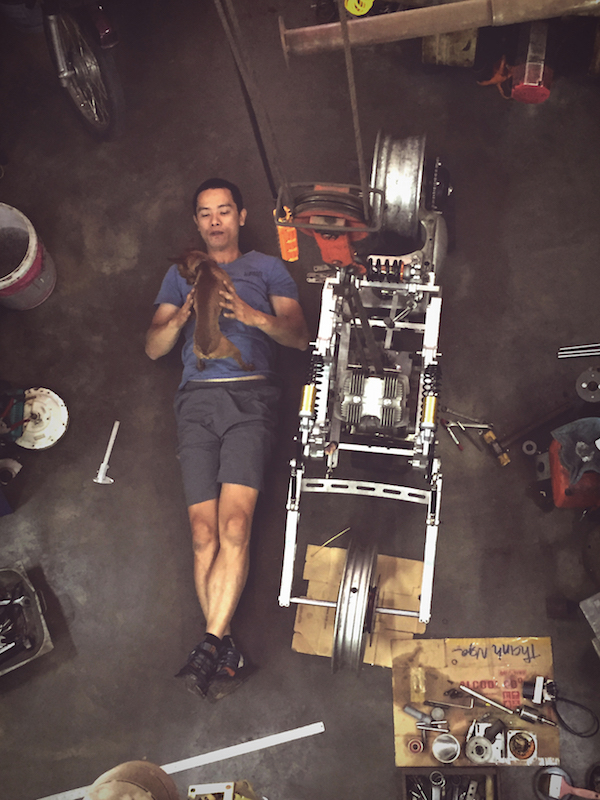 In the five years since, Huy has started his own business in Bao Loc roasting coffee, which he sells at a coffee shop in downtown District 1. The bike he’s built himself is the first of what he hopes will be a string of custom bike builds. Though his brother has passed away, Huy is in important ways following a lead his brother had given him earlier. “We had planned so many things,” he says. Huy, an ambitious business student educated in Australia who in 2012 ran the 1,600-kilometer length of Vietnam over the course of 40 days, found a kindred spirit in his younger brother who was a gifted networker and showed early entrepreneurial promise.

As they say, the apple falleth not far from the tree. Huy and his brother are the son of a self-taught machinist and engineer in Bao Loc. Growing up, the former remembers watching his father build electric generators by hand using outdated automobile engines. “He’s like a hero in my life,” says Huy. 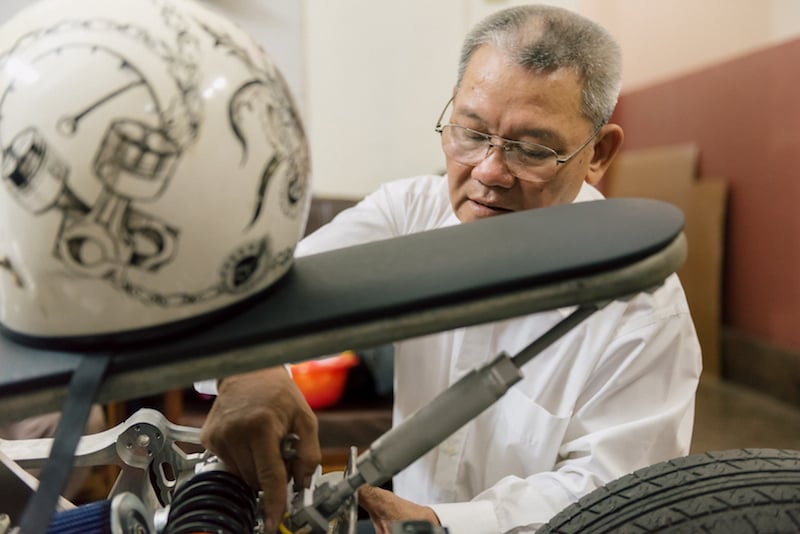 Huy remember that he and his brother were given machines to play with when they were younger, but Huy says his father never gave them explicit guidance to teach his children to work with machines. Machines parts were Huy’s toys until his dad saved up enough money to buy the two a Playstation, which was greeted with great fanfare. “He didn’t push [engineering on us] at all.” 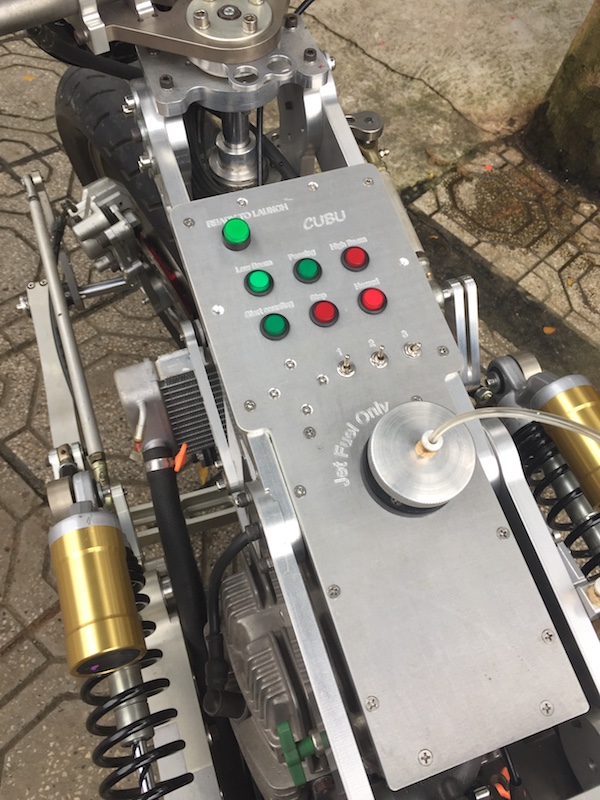 Huy’s decision to give himself an education in motorcycle construction was similarly also his own. After taking a ride to Da Lat with his wife on a 250cc Honda bike they both took a liking to, he made an impulse purchase with a local mechanic who was selling theirs. It was in very poor condition, Huy remembers. The bike, the one which would become the Cubu he built years later, barely made the 2-kilometer ride home. He had a larger vehicle take the big to Bao Loc where he could begin rebuilding it. 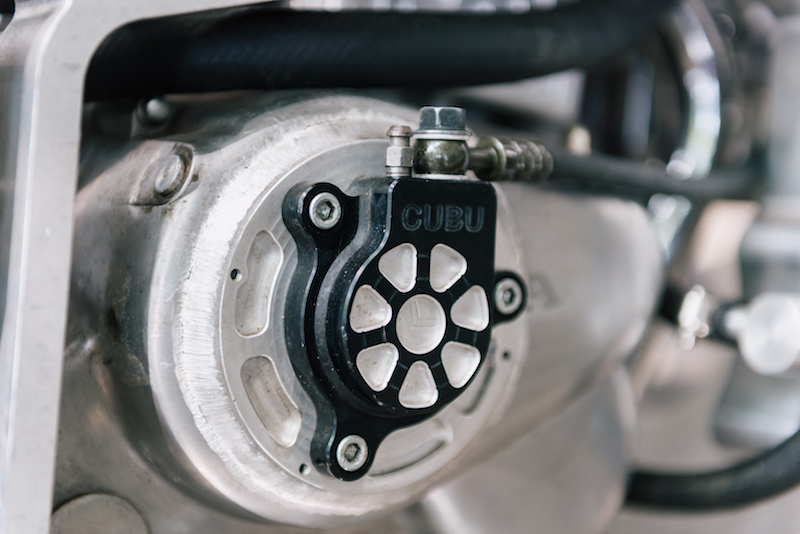 First, he had to figure out how to build a motorbike. Huy was at a comparative advantage to his father who also self-taught himself machine building in a pre-Internet age, where his only resources would have been books and endless trial and error. But even with the web and his dad’s help, Huy still estimates it took him around 2,500 hours to build the bike. That’s about how much time it would take someone to learn basic Greek and then Urdu, according the the US State Department’s foreign language training program. Mai says his preferred mode of study tended to be centered around raw relentlessness: keep studying until understanding is reached.

“When I was studying, I would study until I understand it. Then, I would move on to a different thing,” he says simply. This is how he learned how to machine his own parts and how to build all aspects of this never-before-seen bike, like the French-inspired steering system that ditches the typical bike’s use of a handlebar-and-telescoping-fork system for a more complex one that uses a system of parts that articulates right and left turns through joined bar that move in unison turning the front wheel. The whole set up creates a lower bike profile more common to cafe racer. 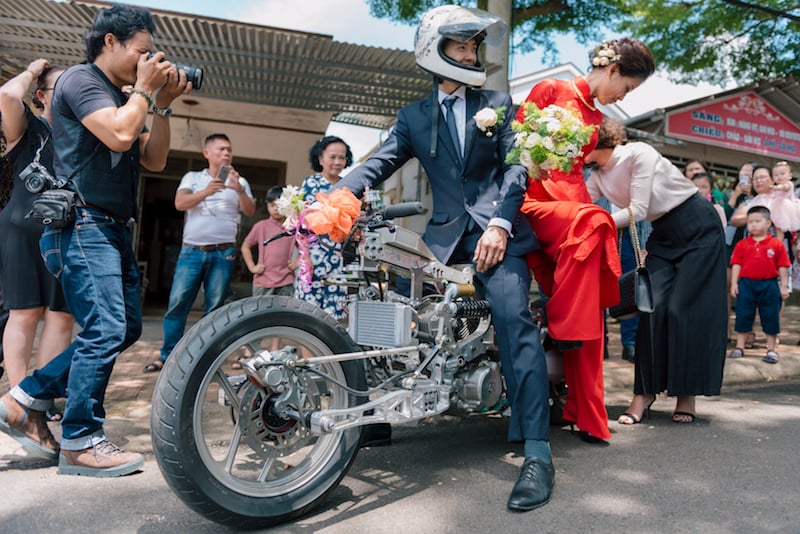 As difficult as it was, Huy says quitting never entered his mind. He learned his lesson about quitting when he took on his cross-country run. About 700 kilometers into the run, not yet halfway through the length he would need to go to complete his run, he hit a wall. Unsure if he could proceed forward, he rested for five days during which the conviction to finish overcame all else. After that time, “I decided I would never quit again,” he says. That relentlessness seemed to serve him well in building the Cubu, a bike which stands peerless even here in Vietnam’s bike-rich automobile environs.

Looking at his bike, it’s suddenly evident how much contemporary bike design devotes to softening the edges of the motorcycle’s raw, hard machine-ness. An aluminum or plastic shell over each motorbike seems in some way necessary to protect the viewer from the bareness, the brutalness of its power. The Cubu is, in that way, maybe more honest and upfront. Whatever adjectives and feelings it recalls, it is as a matter of fact one of a kind, incomparable, like the motorcycle’s namesake.

“I wanted to build something for him. Something like him, something never before built, something there will never be… again,” says Huy.