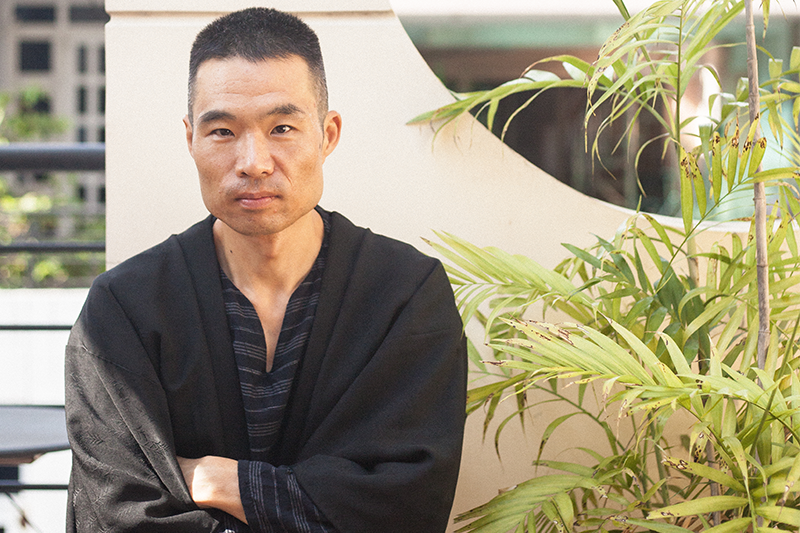 Chefs and most food preparers working in the restaurant industry will regularly sharpen their knives using a metal rod. The rod’s surface is coarse, and rubbing the knife against it files a sharper cut into the blade. To save time (and maybe because it looks kind of cool), those in restaurant kitchens may sharpen their knives in theatrical arm swings, clapping the two objects together that aggressively, quickly create a sharper edge.

“They do this, right?” professional knife sharpener Hiroshi Takeuchi asked imitating the swinging motions of the practice. “Yeah, that’s not right.” Hiroshi is perhaps the city’s only professional knife sharpener trained to execute the work in the style of traditional Japanese craftsmanship. Contrasting with the visually exciting, quick swinging and striking of the restaurant chef ’s knife work, Hiroshi sharpens his knives on a slab of rock called a whetstone. Holding the knife almost flat against the stone, he rubs it carefully against the rock to create an edge. While the cook may sharpen for a few minutes and get to work, Hiroshi’s approach takes more patience and time. 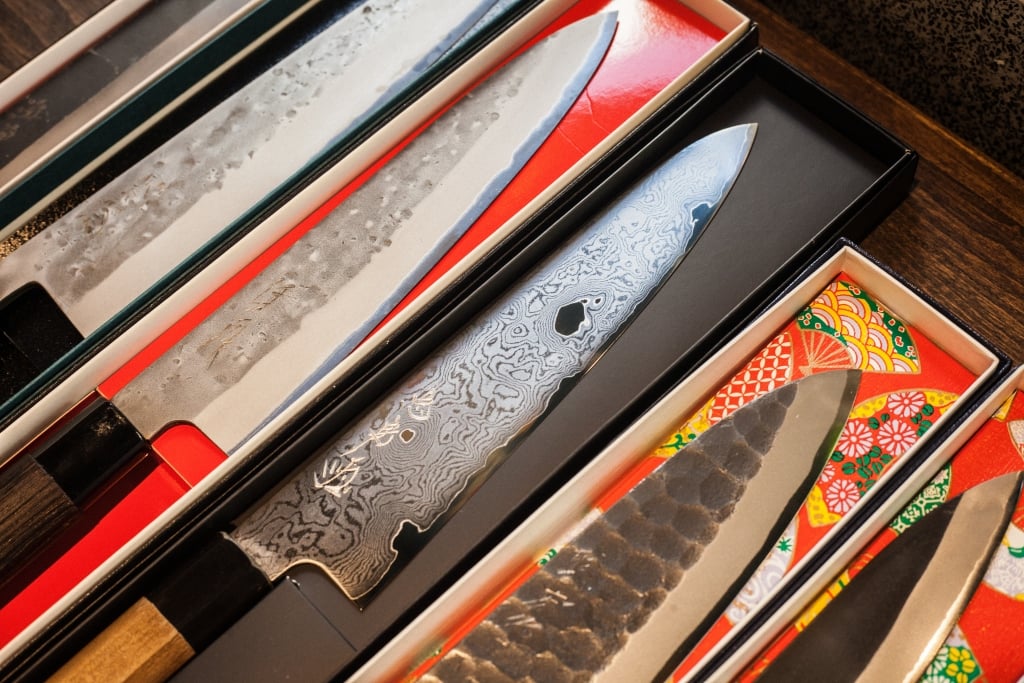 Conscious that not everyone enjoys a bounty of the second, Hiroshi opened the interview by asking his own question. “Do you have some time?” he asked and proceeded to actually begin sharpening a knife. A common culinary knife, it is one of the easiest blades and requires the smallest attention compared to other edges. He sharpened for the next 15 minutes. Like any feat that requires a lot of repetitive motions but delivers a great result like running, the idea of watching someone sharpen a knife is far more exciting in conversation than watching it in person. The physical motions are a bit like waxing the same spot on a car over and over again. Hiroshi didn’t speak much during those 15 minutes spent sharpening the knife except to answer a question. “No, I don’t get bored. Not until now,” he responded with a laugh.

“Have you ever been running before? It’s a bit like that.” Knife sharpening is Hiroshi’s second act, professionally. He hails from Tsubame Sanjo, a city in central Japan north of Tokyo renowned for its blacksmiths and knife workers. But he never picked it up growing in the rural city. Instead, he did what lots kids growing up in the country do: leave quickly and go somewhere far away. Hiroshi previously worked in sales at a firm that provided machines for industrial-scale production. The firm handled accounts throughout Southeast Asia, meaning he was always jetting around skipping between countries.

Hiroshi said he accrued great personal wealth and decorated himself in the trappings of an important salaryman with an expensive watch and tailored shoes. He changed careers and earns today about a fifth of his previous salary. Hiroshi sat for the interview in shorts and a t-shirt in his workshop, which is a room on the third floor of an apartment shared with a burger restaurant. The city’s heat is abated by a floor fan, and a cat sharing the residence that had been hiding in the couch lept away midway through the interview. It lacks the prestige of his previous life but is, by Hiroshi’s telling, more enriching and soulful.

“Good salary and not too difficult of a job… but I’m not that interesting [sic] in that kind of a job,” he said prefacing an explanation to what has been one of the defining decisions in his life. “I don’t know how you feel. I feel that everything in the market, even expensive restaurants, department store. Everything is like a copy product, like a fake product. Even the brand product… I feel everything, cannot feel anything from their product.”

Exhaustion with commercialization and commodification is common, but mass market production is something Hiroshi’s previous company was deeply involved in. His comments are colored by personal experience and a professional contribution to it. “Everything is fake,” he asserted. “I cannot be part of this kind of thing.”

Hiroshi left the company to join a knife sharpening workshop in his hometown, Tsubame Sanjo. It’s a city with a four-century long history making and honing knives, a reputation that’s earned it requests for service from chefs in London, Paris and elsewhere who are focused on culinary excellence and require a precise knife. He sharpened knives for free before building enough expertise to offer the service commercially. His company Sanjo Blade (re-sawakichi. com) walked in to public view in November 2017 with a blog explaining the necessity of sharpening knives.

Today, he sharpens around 200 knives per month for individuals located throughout Vietnam. Hiroshi once sharpened knives belonging to the chef at District 1 tapas restaurant Tomatito. The tradition is not popular with younger Japanese men. Hiroshi estimated that he’s one of a declining number of tradespersons working in this craft. Perhaps it’s because the value of a sharp knife is difficult to appreciate for the end user, like the person sitting down to have a meal. In Japanese cooking and preparing foods like sushi, Hiroshi said a sharp knife is critical to the process, but in other venues like the burger restaurant downstairs the difference is less noteworthy and neither the cooking nor the presentation require it.

This specific question seems located outside of Hiroshi’s field of concern. Aside from an unspecific reference on his website to a “quality of life” improvement a sharp knife can deliver, Hiroshi mostly lets the work speak for itself as he did by taking a newly whetted blade to a tomato during the interview. With no special effort, the knife cleanly moved through the soft firmness of the tomato easily producing an appreciably neat, thin slice.