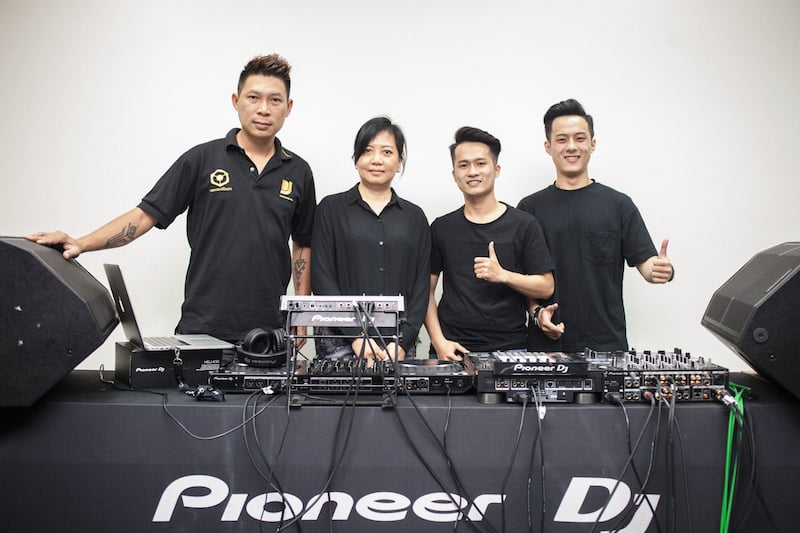 Six months ago, 20-year- old Duc Hoang started learning how to DJ for the first time as a hobby, a nice change of pace from his work as a public relations student. Last weekend, he performed under his stage name Dazed P playing for a crowd of over 100 in a club called Cato in downtown Singapore. “[M]assive night dude,” he said in a text message adding the “audience was maddd [sic].”

Dazed P is one of the dozens of DJs that has trained with Mix Us Happy (MUH), a three-month- long DJ training crash course that gives aspirants all the training they need to perform for clubgoers. “[F]rom zero to ‘hero,’” Duc explained. The contest belongs to music equipment company Pioneer, and has traveled to countries across Southeast Asia. An estimated 150 DJs have graduated from Mix Us Happy’s training. Mix Us Happy is an international project, but the mothership is housed at Pioneer’s Ho Chi Minh City office on Dien Bien Phu Street in District 3. It’s there that Duc and other Mix Us Happy staff prepare for the next round of DJ training classes, or “seasons” as they’re known internally to contest organizers. Duc is a graduate of the third season and will be participating in the fourth, as a teacher, taking place right now. MUH is led by and originated with established local DJ and musician Kaiser Tran and Linh Hoang, a senior staffer with Pioneer. The contest was created in 2017 to answer what Kaiser saw as a need to create a space for DJs who weren’t quite ready for large, professional events but needed to refine their craft. “Every year around the world, you have pro level (DJ) events, but there’s nothing for intermediate (performers),” Kaiser said. “I see the young generation, they have the ambitions for music… but no place for them,” LInh added.

The curriculum Mix Us Happy DJs undergo is a mix of technical training as well as networking, music history education and team building. Kaiser said that trust and friendships were key to MUH’s work in building a supportive, nurturing environment where learning can take place. As an instructor, Kaiser has shown films to his students, taught them about DJing as a technical skill and even taken them camping. “Learning is sharing,” he said. “When you start to learn something, you need to find a master.”

The goal of MUH is to create opportunities for the young DJs to link in to the city’s performance scene and keep playing if they wish to. To serve this aim, DJs are trained in marketing themselves and using social media to promote their image as professional artists.

Duc adds that DJs participating in MUH must “prepare their spirit,” a comment that touches on electronic music’s power. It is perhaps due to the music’s often very public, bodily consumption (it’s played for dancing crowds) or the often singular nature of the sound (a strong, unvarying beat over which sonic worlds grow) that the music engenders feelings of powerful joy approaching something spiritual or religiously flavored.

Kaiser said Dazed P’s performance in MUH was emotionally moving and showed evidence of a strong performer ready for a debut abroad. “Every day in life, we need a story. (Dazed P) is someone who understands that. He made me cry.”

As a much younger man, Kaiser first began learning music through a guitar and moved on to DJing, which he asserted “is the same thing.” “Music is matched to memory…. spirit,” he said. “People come to see and experience it. Music unites people.”

Before he helped launch MUH and establish himself as a musician through both his DJ work and an electronic music project called Digital Code, Kaiser was a music devotee attending shows. He was a spectator at a 2010 DJ battle where he met a younger Linh. It was there he made the decision to stand not before the stage but on it.

Two years later, he attended a similar DJ battle event in Bangkok as a competitor. Linh and Kaiser remained in touch throughout the years and decided to launch Mix Us Happy last year.

As a middle-aged woman, Linh does not profile as the target audience for electronic music, but she is nevertheless a regular attendee of Mix Us Happy’s events. Linh said she sees the program as a parent and lauds its value for creating a place for not just young DJs but young people in general. “My son is the same age with the contestants. I understand the young people, what they want. There should be a playground for them to join.”