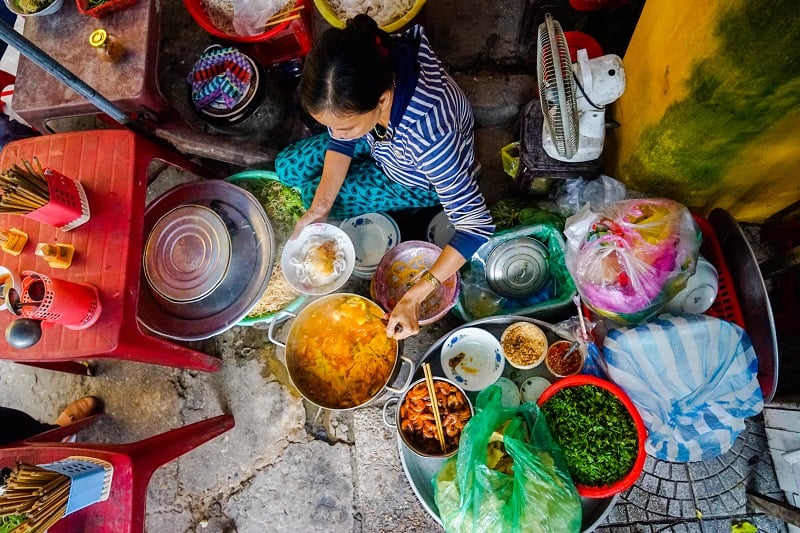 While Hoi An is firmly on the tourist map for a lot of things—a ridiculously photogenic Old Quarter replete with colorful Insta-ready lanterns and artfully faded walls, an absurd number of tailor shops churning out designer-inspired garments in a day, and a unique mix of architectural influences that recall its history as a bustling medieval port town—what it doesn’t have is a widely-known reputation for being a foodie destination.

Wanting to see whether there was more to the Hoi An food scene than simply feeding hungry tourists in between fittings and spa treatments, I set out to learn about some of Hoi An’s most defining dishes. I started with cao lau, perhaps the dish that best encapsulates what Hoi An is all about. Practically the opposite of pho, cao lau is all about thick, chewy noodles with a miserly amount of broth that’s almost more gravy than soup, all topped with slices of sautéed pork, fresh herbs, and crunchy crackers. Cao Lau at Victoria Hoi An

The Vietnamese translation means “high floor”, perhaps recalling traders sitting in eateries along the riverside looking down on the busy port while downing a bowl of noodles. During Hoi An’s heyday between the mid-1500s to the early 1800s, it’s said the town’s population doubled to 10,000 residents between the northern and southern monsoons as merchants from China, Japan, Holland, Portugal and beyond took advantage of the natural shelter Hoi An provided. Could some of these have put their mark on cao lau, a dish that hardly seems Vietnamese?

Instead of wimpy, boiled noodles, sturdy cao lau leans more toward Japanese udon or soba. There are indications the Chinese also may have had something to do with the dish as the Chinese characters for cao lau translate to “high steamer”, pointing to the way the noodles are made, while Chinese five spice powder gives the char siu pork its smoky flavor. Some Japanese and Chinese adventurers settled permanently in Hoi An, establishing communities evidenced today by the iconic covered Japanese Bridge and the many Chinese assembly halls scattered throughout the Ancient Town. However, neither lay claim to cao lau. 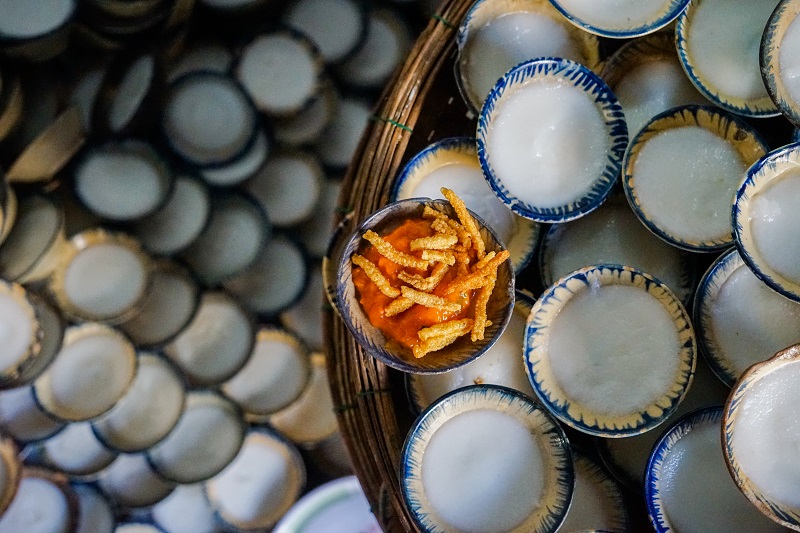 Perhaps the origins of cao lau reach back even further, to the Champa Kingdom which ruled over this stretch of coast between the 2nd and 15th centuries AD. Mainly seafarers, the Cham used Hoi An as their commercial capital while building impressive towers and temples in nearby My Son, their spiritual center. Today, it’s said that 80 or so ancient Champa wells remain around Hoi An, once used to supply freshwater to foreign sailors. The most famous of these is Ba Le whose clear water, together with ash from trees that grow on the cluster of Cham Islands just 12 km off Hoi An’s coast, were traditionally combined to make the lye water used to soak the rice for cao lau noodles.

One morning, I made my way to the Ba Le well and was surprised to find, despite its lofty reputation, an unassuming brick structure adorned simply with a small plaque. I looked down into the well, past the fluorescent moss-covered walls and into the dark water below, trying to divine what it was about this very location-specific set of ingredients that leads to cao lau’s distinctive texture. While the ash is no longer from the Cham Islands and the water is from other alum-rich, local sources, this unique combination still means cao lau is rarely ever served anywhere outside of Hoi An.

The cao lau noodles are also sometimes fried and added to banh beo, dainty rice flour cakes individually steamed in little bowls, giving them a perfect circular shape just like the water plants they’re named after. It’s said that these cakes may have originated from Hue, just two hours up the coast, although it’s hard to imagine something so simple being served to royalty. For a taste of the Hoi An version, I made my way to the home of Lo and Tu, an older couple who have been making banh beo from scratch for years. In the early morning, Mr. Lo grinds rice into powder in their tiny kitchen, a small, solitary window shedding light onto the heavily soot-stained walls, a result of the wood fire used to steam up to 600 cakes a day (both for sweet and savory banh beo). Mrs. Tu cooks the topping, a thick slurry made of shrimp and pork to serve customers who gather on plastic stools in their living room.

By the time Champa rule faded and French colonization began, Hoi An’s Thu Bon River silted up and port activities moved up the coast to Danang. Hoi An reverted to a poor backwater town until the 1990s when adventurous travelers and UNESCO inscription once again brought prosperity to the area. As I sat down to a plate of chicken and rice, I wondered if all those ignominious years spent in neglect taught the people to be thrifty in their ways. If so, it would certainly explain Hoi Anstyle chicken and rice which owes its magic to extracting every bit of flavor possible from the free-range chicken that’s the star of this dish. After boiling the chicken, the stock is used to cook the rice, aged for at least a year to dry it out, ensuring it soaks up as much of the stock as possible. The result is firm, plump grains that don’t stick together like regular rice, topped with shredded chicken and a salad of fresh herbs and sliced onions. The bones and innards are used to make a gravy as well as a side soup to wash it all down. 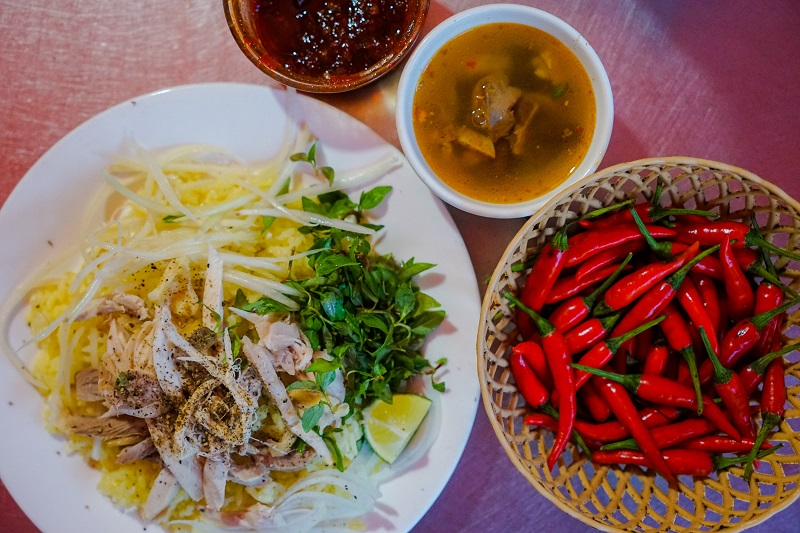 I spent the next few days willing myself to get hungry fast enough in between second breakfasts, lunches, afternoon snacks, early dinners and late night feedings. I sampled dishes that made use of local ingredients like the incredibly aromatic, organic herbs from the Tra Que village fertilized with local seaweed that accompany sizzling banh xeo crepes, or the tiny clams harvested from the brackish waters of the Thu Bon and its tributaries. I visited the baguette shop serving what Anthony Bourdain described as a “symphony in a sandwich” and munched on open-faced fried wontons topped with sweet and sour shrimp, pork, and peppers. 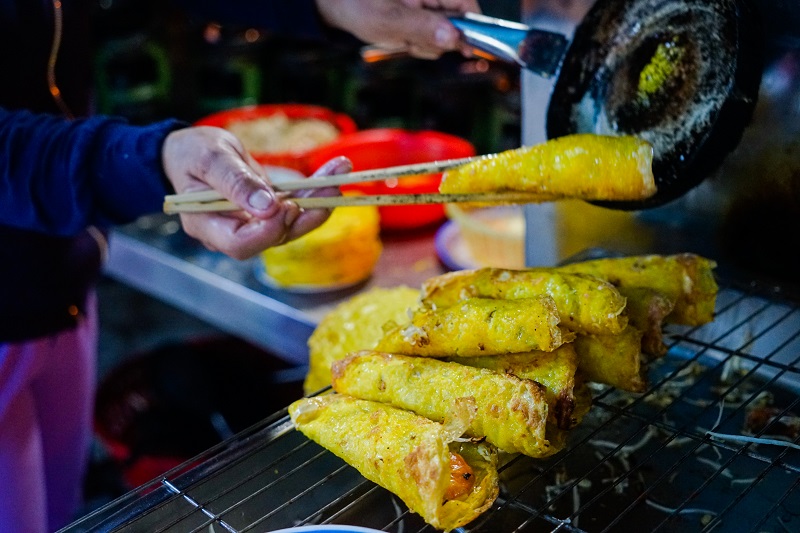 Everywhere I looked, the town of Hoi An was an open kitchen, putting their own spin on yum, from the older woman hand-forming discs of dough into translucent rose-shaped dumplings at the back of a 150-year-old house to a woman fussing over the many ingredients that go into mi quang noodles, a hodgepodge laborer’s meal which originated in the province where Hoi An is located. Much more than shopping and beaching, Hoi An had in fact proven itself a formidable culinary destination, serving up an array of flavors just as unique and colorful as the town itself.

Cao Lau Thanh (26 Thai Phien) serves wonderfully gritty noodles under the shade of a big tree after 4pm. Co Tu’s banh beo can be found tucked down an alleyway across from ÊMM Hotel Hoi An after 3pm at 98/50 Nguyen Truong To.

Com Ga Xi at the entrance of an alleyway at 47/2 Tran Hung Dao serves up some of Hoi An’s best chicken and rice. Continue down the alley and follow the signs to the Ba Le well. The nearby Ba Le Restaurant (45/51 Tran Hung Dao) also serves a great combo of sizzling crepes, shrimp spring rolls, and grilled pork skewers, all accompanied by herbs from Tra Que. Head south of the Old Quarter to the nearby river island of Nam Cam where you can snack on minced clams and rice crackers while lazing in a hammock looking over the Hoai River, a tributary of the Thu Bon.

To try all of these specialties in one place, Spice Viet Restaurant (187 Ly Thuong Kiet) utilizes mainly organic, locally-sourced ingredients in its classic Vietnamese menu in a spacious, contemporary setting.

ÊMM Hotel Hoi An (www.emmhotels.com) makes a great base from which to explore Hoi An’s vibrant food scene, just a 5-minute bicycle ride from the Ancient Town. The hotel’s 92 generously-sized rooms and scenic outdoor pool oﬀer a retreat that’s stylish and modern with bold colors and clean lines yet comfortable and aﬀordable with all the amenities you need while on the road.