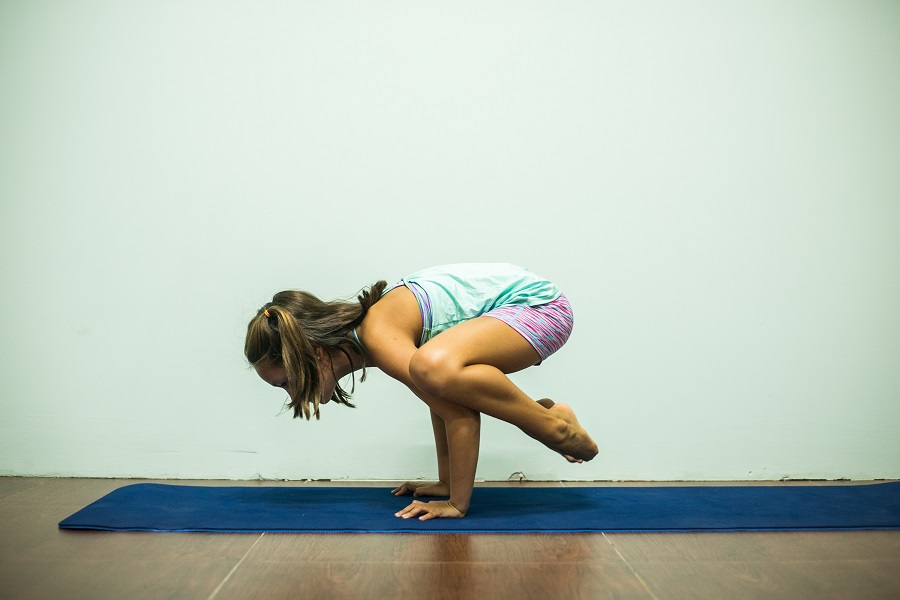 Creating mindful children one breath at a time

Yoga Joy Saigon (yogajoysaigon.com) opened three years ago in 2016 by American Alison Lockwood. Alison, from Marblehead, Massachusetts, came to reside in Vietnam in 2007, working as a teacher when she met her Vietnamese husband while volunteering for Saigon Children’s Charity. At the time she wasn’t thinking about a future in yoga. “I’d dabbled in yoga and I never really loved it. It just didn’t totally click,” she explains. “I knew it was good for me, but I could never get into consistent practice. Then, after my twin boys were born I needed to find a way to get active again, but because I had 3 children under 2 years old I had a very limited schedule in terms of what I could do.” 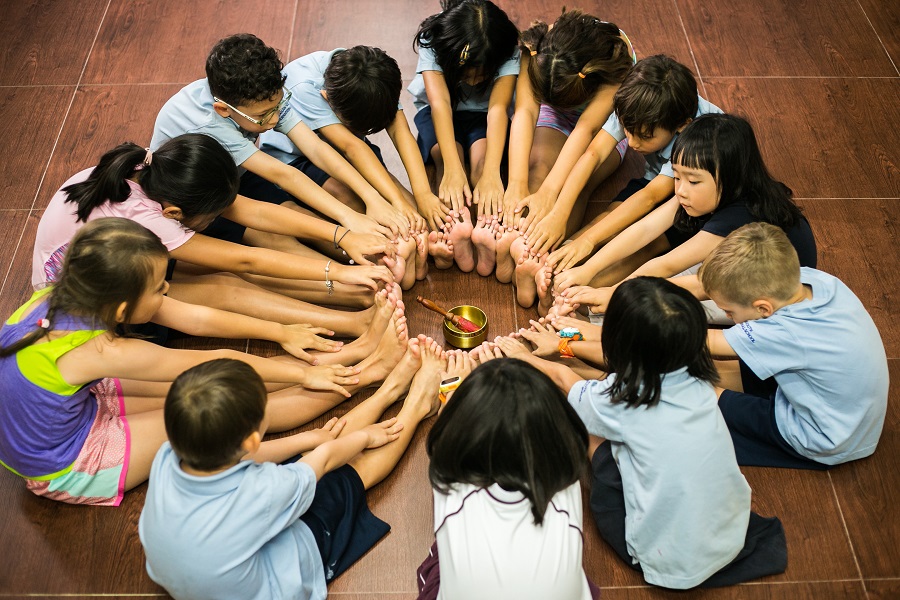 She started simple, watching videos and doing chair yoga, a less strenuous form of the discipline, while her children had their daily naps. “I found that it was a mood shifter for me. I started feeling better. I started feeling active. I felt proud of myself and I really started to get more interested in yoga in terms of the anatomy of it and the different asanas (body positions),” she continues.

Then on a trip back home to the US, while visiting a local gym, something changed for Alison. “That was a big move for me. I had always worried that yoga was a type of exercise where there was some self-consciousness about it because if you weren’t flexible or you weren’t able to do fancy moves then you felt like everyone else was kind of looking at you; maybe you felt out of place or awkward or embarrassed. And I do think that a lot of people find that as a stumbling block to starting yoga.” She decided to change that.

Her kids got a little older and she had a bit more time so she took a training program specifically for teaching the discipline to children, eventually teaching yoga at the preschool where her daughter attended. “It was amazing. I loved it. I loved how receptive the kids were. I loved how happy it made them. I felt like I could teach them valuable things. I infuse a lot of mindfulness into my yoga, and I thought if I can get these kids started at age three, imagine what type of figures they’re going to be like by the time they’re in high school.” 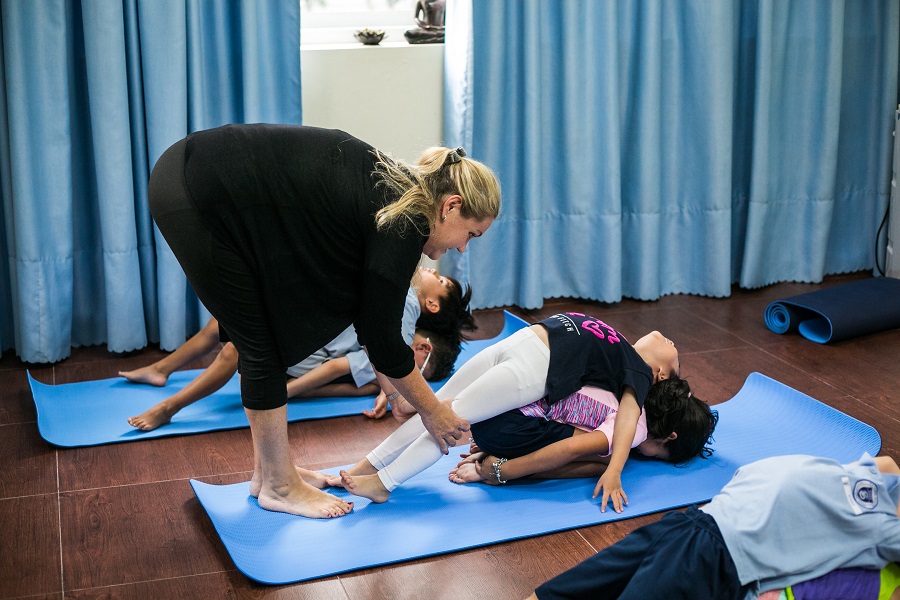 Alison mentioned mindfulness as a lot of yogis do, which refers to focusing one’s awareness on the present moment. It means calmly acknowledging and accepting one’s feelings, thoughts and bodily sensations. That sounds like a tall order for preschool children, but Alison was encouraged by the glowing feedback she received from parents about the benefits of yoga and mindfulness to both their children’s physical and mental health.

Following the success of these classes, a friend suggested she open her own studio. “I really wanted a studio where people don’t feel self-conscious; a non-pretentious place. I wanted any mom or dad out there who may not be flexible, who may not be in shape, who may be overweight, who may be injured; I wanted them to feel that there’s a place for them to come. So I opened Yoga Joy Saigon with the intention of creating a place for not only providing yoga for children, but creating a community for District 7 families,” says Alison.

The idea of calculated postures, meditation and mindfulness may seem unattainable to small children. It even sounds difficult for teens with their increased reliance on smartphones, but the methods employed by Yoga Joy Saigon address that in a way that’s fun and engaging for kids and teens alike. As Alison explains, “It’s tricky to get some people hooked on kids’ yoga because they don’t understand it. They think that I’m lining the kids up on mats and standing in the front of the room and guiding them through asanas just like you would an adult, but it’s not like that at all. We know that a four-year-old couldn’t tolerate that. They’d be bored in a second. So we sit in a circle and we learn things like breathing, pranayama, by using different themes. We learn about posture. I use puppets, I use bubbles, parachutes, a ton of props, because I want to engage them, and it works. One of the favorite things we do is called yoga adventure. Each week we create a yoga journey where kids learn five or six different poses as we pretend to blast off to outer space or go on a trip to the beach. We walk around the room and play pretend to each theme.” 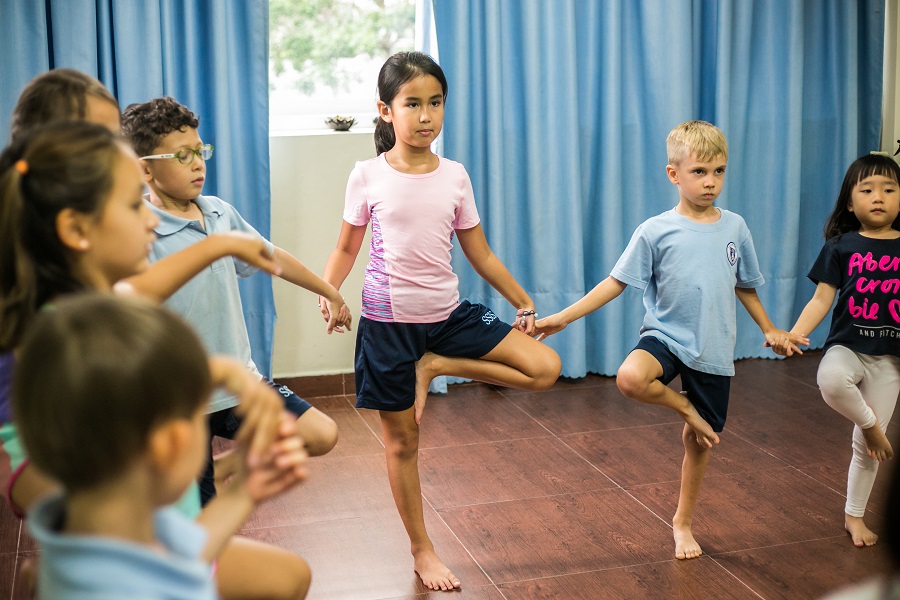 Over the years she’s created a number of fun, educational themes to meet the kids’ interests, from princess themes to character play. She combines those appealing premises with spirited yoga activities. “Kids don’t want to sit still so we are moving, but at the same time they are learning a lot about mindfulness.” When this winds down she rings a traditional Tibetan bell, which signals for the kids to stop the activity. They then place their hands on their hearts and focus on calming breaths. “I’m trying to teach them that they have a tool inside of them and that tool is their breath; that they can control their emotions and actions by slowing things down and breathing. And if I can give a five-year-old that tool imagine how much easier his emotional development can be.”

Demographically, the kids’ classes are a healthy mix of genders and races, more so than the adult classes, which have a higher percentage of women, but Alison was quick to remind that men are welcome, too.

Alison has spent years perfecting her teaching and yoga techniques designed for children, and it shows. Her commitment to a welcoming, ego-free, professional environment has translated into highly dedicated members of the Yoga Joy Saigon community.