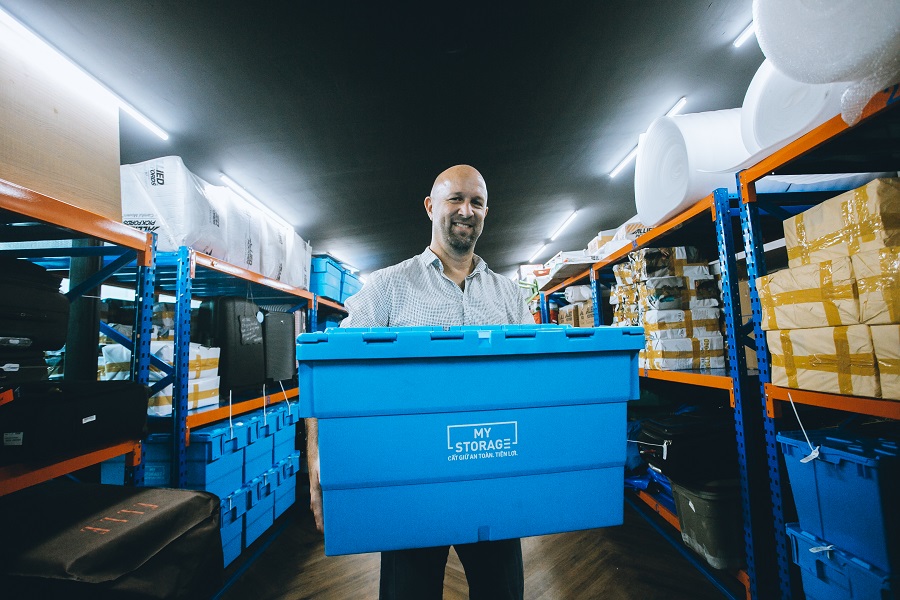 The real estate market in Vietnam is crowded. The self-storage industry, however, is growing

What does the expression ‘self-storage’ make you think of? The term might evoke images of those storage units you would find in any US or European city, holding an overflow of personal belongings for several weeks, months or even years. For someone who lives in Vietnam — well, you might get a different response.

“They might think of a big warehouse at Cat Lai port,” the large commercial port east of the city, MyStorage founder Aric Austin said. A smellier, more humid and less attractive version of MyStorage and certainly not catering to the needs of private individuals or smaller companies.

Your average Vietnamese probably won’t think of an expansive, well-lit and air conditioned facility where you can store anything from a few suitcases for a couple of days to your business inventory for several years. They won’t be able to imagine that someone would come pick up and return your goods at any time. Add a splash of pleasant sea blue on everything to match Austin’s company’s brand look and you’ve got District 2 selfstorage outlet MyStorage.

Austin came to Vietnam in early 2018, leaving Berlin and also leaving a career in media and startups. He’d reached a point in his career where he understood the essentials to build a successful business — financials, recruitment, scaling and so on — and wanted to build something brand new.

After having started to research it seriously, Austin realized that creating a storage company made sense for a number of reasons, not the least of which was the fact that the storage industry is already well established in peer ASEAN cities such as Bangkok, Singapore and Kuala Lumpur. Nothing like this existed in Vietnam, although it is one of the countries in Asia with the highest GDP growth. Like these peer cities, Ho Chi Minh City has a thriving middle class that will be needing storage services. Small apartments, due to increasing housing costs, and higher spending on material goods inevitably lead to a need for secure storage solutions.

MyStorage was thus founded with the mission of offering a convenient, secure and affordable storage solution to people living in Vietnam’s growing mega cities. To give them more space in their lives for the things they enjoy.

“We have found that there is a strong relationship between a country’s GDP and its urbanization rate, which leads to an increasing demand for storage, and we can observe this trend taking place Vietnam. We believe Ho Chi Minh City is the next place to catch the wave as people become more affluent and move into urban areas with less space. Also, we see a trend to ‘decluttering’ in general which is demonstrated by the success of shows like Marie Kondo on Netflix,” said Austin.

Since he opened MyStorage in the summer of 2019, locals have come to be close to half of his clientele, with the remainder consisting of expats from nations such as the USA, Australia or Japan where self-storage is a well-known concept.

Increasing numbers of residents moving to Ho Chi Minh City and Hanoi from the countryside means the size of homes and apartments in these metro areas will likely shrink, making self-storage a more critical part of these cities’ growth and development. What’s more, many of these living quarters are offered with furnishings that may not fit the residents’ tastes. Before MyStorage was founded, there were few options to relocate these large items.

“As professionals at all stages in their careers come to Saigon, from the newly minted single expat to those relocating with their family, MyStorage will be there to serve their needs, securely holding luggage or whole households’ worth of goods,” added Austin.

Here’s how it works. Customers make an inquiry via email, telephone or book the service directly on the website www.mystorage.vn, where they can determine when their items should be picked up and how much space they require. If requested, MyStorage also delivers complimentary storage boxes to the customers before the pickup date so that they can safely pack and organize items. On the scheduled date, MyStorage picks up the customer’s belongings and brings them to their clean, secure and air-conditioned storage facility.

Customers can ask for their items, either all or some of them, to be returned at any time. This has proven to be a particularly valuable feature for commercial customers who need to house overflow inventory, marketing material or other items where they need frequent access.

As for future plans, the MyStorage founder said the company will focus on making the service more efficient through further tech development and will also expand within and beyond Ho Chi Minh City. The company has also recently debuted a Korean language version of their website to serve the city’s sizable Korean population and are planning to launch a Japanese site in the very near future.