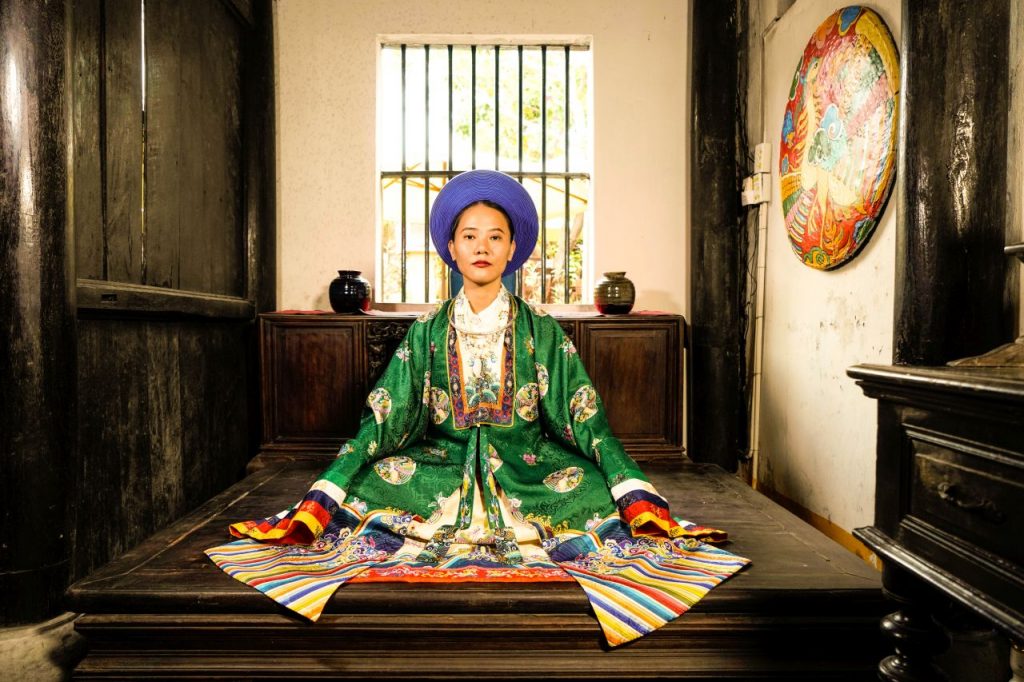 Hoi An is arguably Vietnam’s most photogenic town, with its artfully peeling ochre-colored walls, colorful silk lanterns, and centuries of history starting out as a bustling seaport on the Silk Maritime Route.

As if that weren’t enough for epic photos, in summer 2020, friends Leo and Van opened up Viet Phuc, a costume rental shop specializing in traditional Vietnamese garments.

Oi recently sat down with the stylish duo to talk about their new endeavor.

Oi: Tell us a bit about your background and how you both ended up in Hoi An.

VP: I actually studied Banking in Hanoi, worked for a dental clinic and then in the textile industry. I moved to Hoi An where I worked in Sales and Marketing for an international school for 2.5 years. That’s where I met Van and told her about the idea for Viet Phuc. As for Van, she studied Business Administration in Hanoi, worked Events and Marketing for 5 years, and then was attracted by Hoi An’s special spirit and energy, coming here to work as a henna artist.

Oi: How did the idea for Viet Phuc come together?

VP: Vietnam is naturally focused on developing the economy and not focused enough on showcasing the beauty of the country. However, we can look back and appreciate the heritage of our ancestors. We see it in movies and we both shared this love of culture.

There’s a growing movement towards reviving art from the past, for instance, the non-profit project Hoa Văn Đại Việt, which digitizes ancient patterns, motifs, and even architecture, to print on fabrics. Vietnam has lost so many artifacts and historical items throughout the years, some which have been newly taken back from museums and through auctions.

Other artisans have restored traditional embroidery and patterns to breathe new life to these precious aspects of Vietnam’s heritage. At first, it was limited to a very small group of people but now has become more popular and accessible. We wanted to introduce this to the younger generation; the younger they are when they’re exposed to the beauty of the past, the more alive it becomes.

Vietnam has learned values from all over the world but we can show and promote our own values of beauty. Korea, Japan, and China each have their own unique costumes, but so do we. By appreciating our culture, we can integrate without disappearing.

Oi: What makes Hoi An the right place for this kind of business?

VP: Hoi An has a lot of activities that promote traditional values so we’re happy to join other Hoi An businesses in doing so. Hoi An is a special place where people can come together, a real blending of many cultures.

There’s also the opportunity to globalize. Here, expats truly blend into society, not like Bui Vien in Saigon or Ta Hien (Beer Street) in Hanoi.

Oi: What kind of costumes does Viet Phuc rent out?

VP: We have several types of garments. The square-neck ao nhat binh was originally worn during the Ming Dynasty but was adapted and upgraded by the Vietnamese. Our version has a phoenix pattern, traditionally used for the queen, princess, and female members of the royal family. For men, we have the ao mang bao, an imperial short-sleeved garment worn by the prince with a Snake Lord print and the ao hoang bao, a garment traditionally worn by the king with a Dragon Lord pattern.

Imperial costumes are our precious heritage, but they’re not convenient for daily life. So we’re also bringing back the ao ngu than, a casual five-paneled precursor to the ao dai worn by both men and women. The panels represent your parents, your in-laws, and yourself. The five buttons represent the five elements. The ao ngu than with large sleeves was worn by the upper class on special occasions like Tet or weddings, funerals, and other ceremonies. Unlike Western dresses which tend to be straight and tight to show off your curves and the ao dai which accentuates the body, the ao ngu than covers all your disadvantages, so you can wear it with confidence. In fact, in Hue, office workers have taken to wearing ao ngu than on Mondays. Wearing it out and about is a new way of being “cool”.

We also tailor make ao ngu than. We source fabrics from artisans in various patterns, colors, hidden patterns, and embroidery. We’ve been surprised that a lot of people, especially study-abroad students, are interested in tailoring costumes as a way of bringing a bit of Vietnamese culture with them.

Oi: How do the costume rentals work?

VP: Our customers can rent a costume with props for as little as 2 hours, starting at just VND 150,000. We also offer a full-service photoshoot, including make-up artist and professional photographer. We can arrange studio set ups (like here in our studio located within The Bazar Coffee Hội An, a colonial-era building) or in the Ancient Town. We have several favorite spots like the Chinese assembly halls, Hoi An’s iconic yellow walls, and the Chua Ba Mu pagoda. If the weather is bad, we can arrange indoor shoots at some really photogenic cafes and lounges. It’s not just a costume; it’s an experience.

We’ve even done some pop up events at bars and other places where we’ve set up a small corner where photos cost only VND 70,000. Many women just come for the photo. It’s a girl’s dream to be a princess!