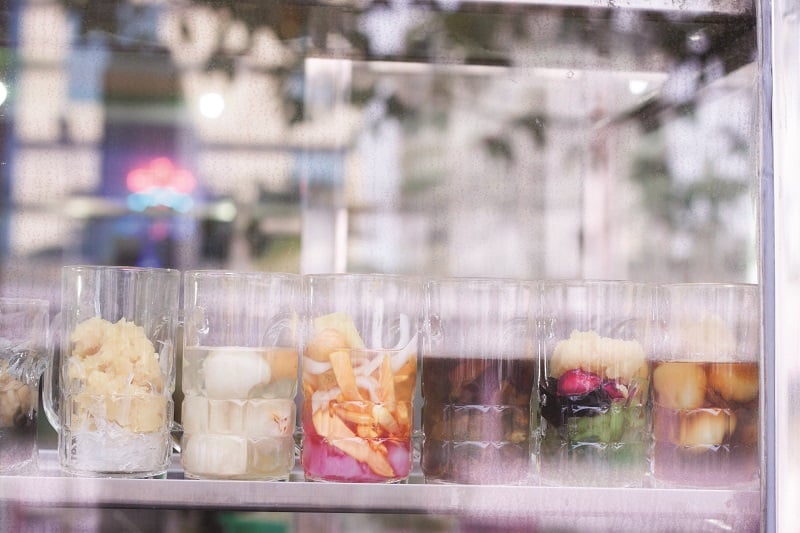 The weird and wacky world of Vietnamese desserts

Coming up with a global definition for the whole spectrum of traditional Vietnamese desserts is certainly problematic. The collective term che (pronounced “jeah”) covers a broad range of what you might think of as sweet soups or porridges, served either warm or ice-cold. It’s the unexpected delicacy of the flavors that strikes most first-timers – beans and seaweed aren’t instinctive choices for internationallypopular desserts, but with a little Vietnamese culinary wizardry, the combinations work.

You could trek around Saigon for a week and still fail to sample every variety of che on sale at the many specialty stores in town. There are some more or less standard desserts, however, that you really wouldn’t want to miss out on while you’re here.

The eponymous dish at Che My (119 Nguyen Thai Hoc, D1) is probably what most people think of when they go out for che. Served like a sundae in a tall glass, this variety of the traditional che ba mau dessert is an icy blend of colored fruit jellies, thinly-sliced jackfruit, hunks of preserved coconut, green beans, white broad beans, and palmyra – all layered like a parfait in a cup with a mild pink syrup, sweet coconut milk, and shaved ice. The star ingredient is a cubed red jelly enveloping slivers of crunchy water chestnut. Che my is not quite a soup, nor is it a drink; it’s less sugary than your average bowl of sweetened breakfast cereal, but beware – the initially addictive coconut cream will rapidly diminish in appeal past the second glass. 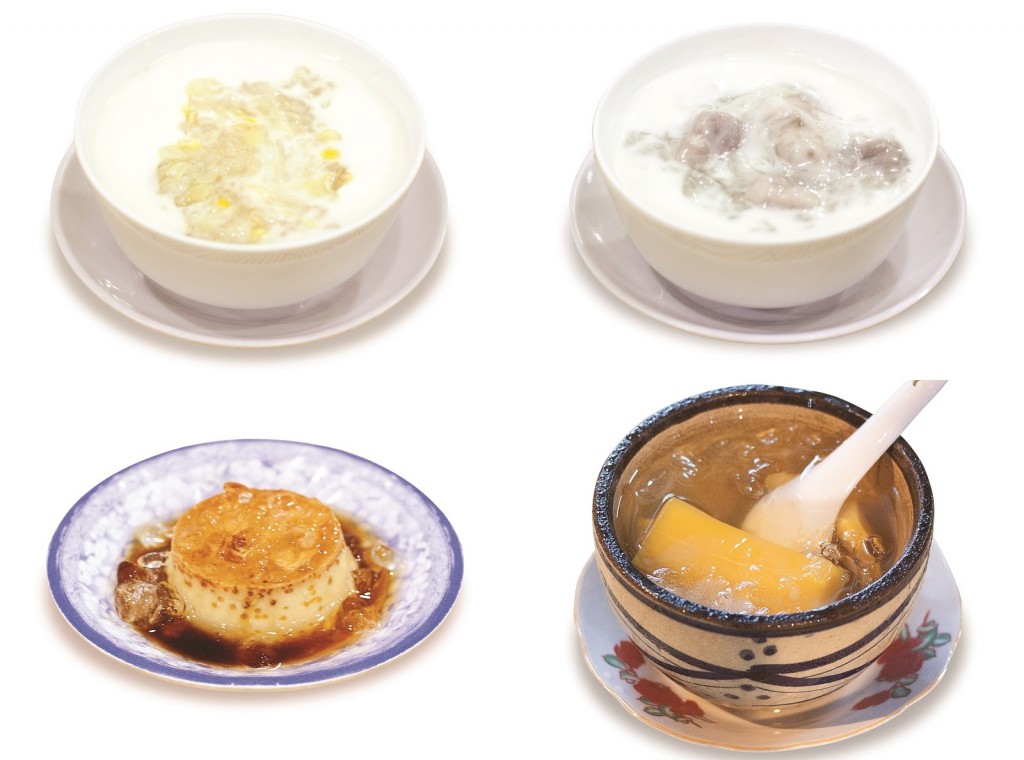 At the other end of the scale, che bap and che khoai mon are far simpler dishes. Small servings of warm gelatinous rice sweetened with coconut milk and blended with corn and taro respectively, these less exotic che are pleasantly filling and particularly welcomed on an empty stomach. This sweetened gruel has been an afternoon staple in the southern region for a very long time, often made with tapioca and sometimes sharpened up with a little grapefruit flower oil and roasted sesame.

Family Thais
One of the more dynamic aspects of having such a loosely-defined national culinary tradition is its ability to draw in other influences and turn out brand new forms. This has happened in the case of che Thai, now one of the most popular variations on the dessert and the result of an enthusiastic Vietnamese take on a relatively similar dish originating in Thailand called tap tim krop. Che Thai Y Phuong (380-384 Nguyen Tri Phuong, D10) was such a hit when it began rolling out classic iced che with durian several years ago – it was the first che Thai store in the city – that copycats now seem to have taken over the whole street. 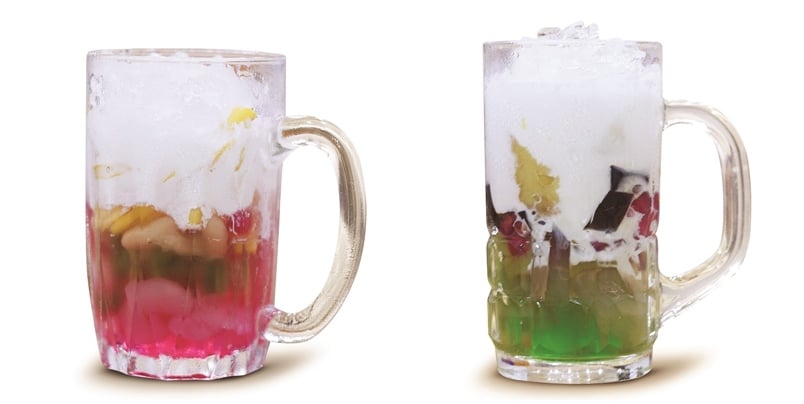 Che Thai is essentially all about the durian, although those not overly fond of the fruit will be pleased to know that it doesn’t entirely overpower the recipe, which is otherwise very similar to che my above except with more colorful chunks of jelly. The result is a rainbow of a dessert that any kindergarten-age kid would throw tantrums to be allowed to try.

A rather more austere dish at Che Thai Y Phuong is more of a mouthful to order – che dau hu sau rieng sua tuoi is a far milder variety of iced che, with fresh milk replacing the coconut cream. Served here in a beer mug, this ivory-colored dessert still has its hunk of durian, but the fruit is offset by a thick disk of soft, olive-green khuc bach (a very slightly sweetened gelatin-based substance not unlike tofu). This is an old matron of a dish in contrast with the vibrant, silky-stockinged che Thai, and it has an appeal that’s very hard to place – fans will find a comforting graininess or mealiness in the drink that makes it seem healthier to consume than all the colored jellies otherwise on offer.

Fine China
Deep within one of Chinatown’s most exotic suburban locations (set amongst the silk markets and behind the most ancient temple in Cholon) lies one of the oldest che venues in the city. Unchanged for a good 70 years and passed down through four generations of a local Vietnamese Chinese family, Nha Den – a tiny blue shophouse squashed in between pajama shops off the Soai Kinh Lam intersection on Tran Hung Dao – serves a hybrid che channeling the influences of Cantonese cooking and Traditional Chinese Medicine. Open late from 4pm, the venue’s signature dish is sam bo luong, a cocktail of herbs, beans, and grains best served freezing cold. Known outside of Vietnam as qing bu liang, the original dish was indeed a purely medicinal soup that was picked up for its cooling properties as a popular night snack in the sweltering Hong Kong summers, entering Southeast Asia from there. Nha Den’s version is no less refreshing in its icy, sweet transparent syrup serviced with lychees and their juice; the soup itself looks like it’s been scooped out of a fishbowl with its fans of white seaweed and bobbing chunks of lotus root and red dates. 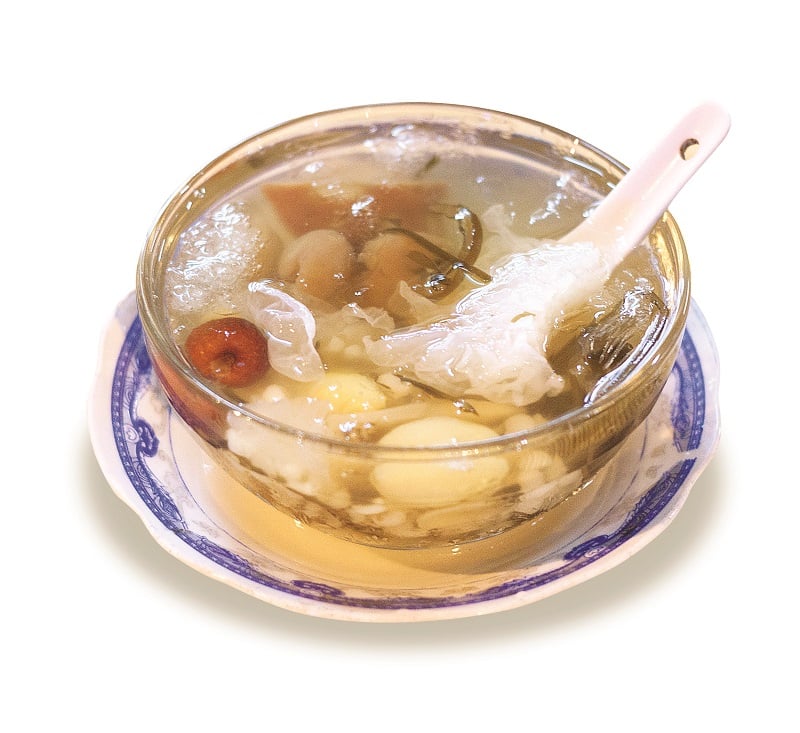 A rather more challenging che is the hot ga chung, a thick gelatinous sweet paste served in a ceramic bowl engulfing a raw egg and a dash of coconut milk. You’re supposed to stir it through as soon as it’s served, but to do so is to commit yourself – the slightly salty gushing yolk gives the dish a hint of meatiness that makes for an awkward transition between sweet and omelette-y, whereas the paste on its own seems more familiar and is quite pleasant. It’s no wonder this dish is often touted as a cure for constipation. 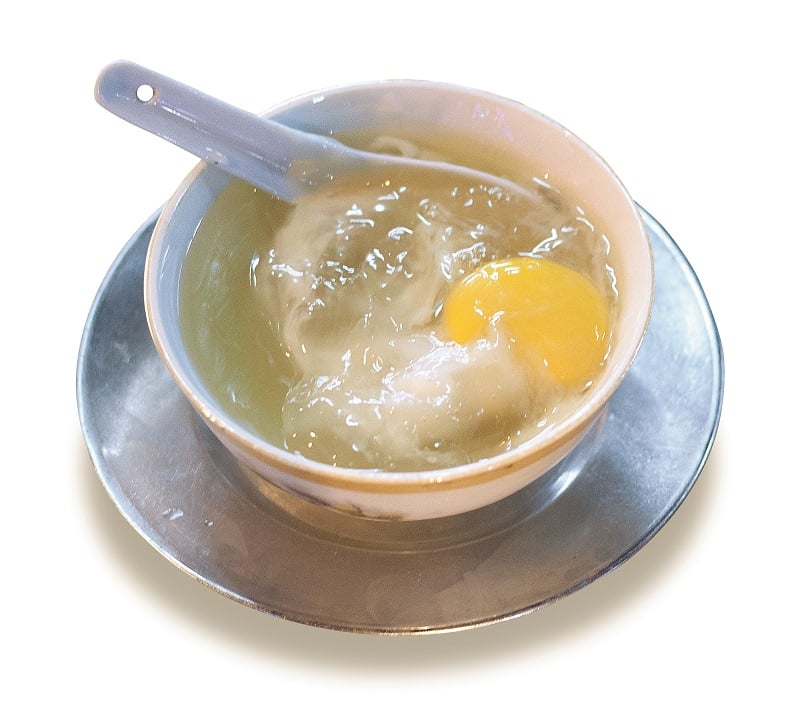