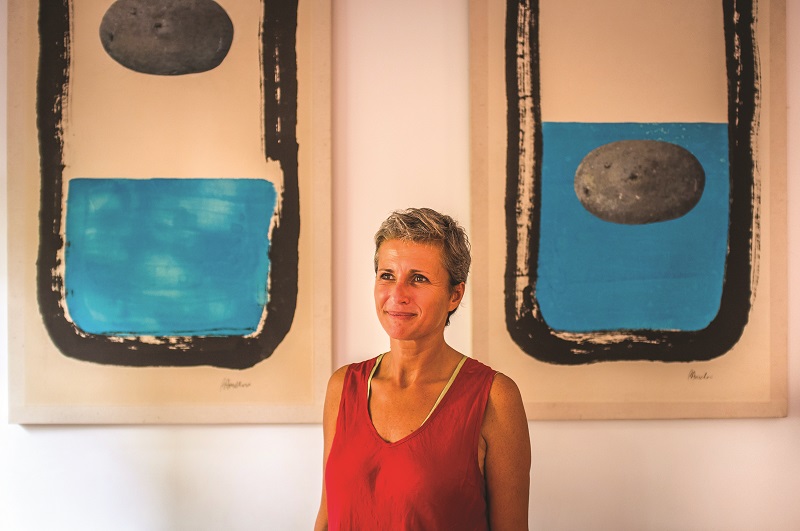 Ensconced in her sunny third floor studio directly on the Saigon River, Italian artist Barbara Anchisi is perfectly happy watching the world float by. It’s no surprise then that boats and barges inspired her latest collection, Cargo, a series of mixed media prints, photos and paint. “It’s not just boats that carry something – what appeals to me are tiny boats tugging huge containers. They carry animals, flowers, children… the boat is the life. I wanted to use [this collection] to show that the whole city goes into the boats. It’s amazing how much water links everything here. The water itself is so alive.”

The journey that brought Barbara to Saigon a little more than one year ago with her husband and son (“I’m still putting bricks into my new life,” she says) has been inextricably linked to her love of art. 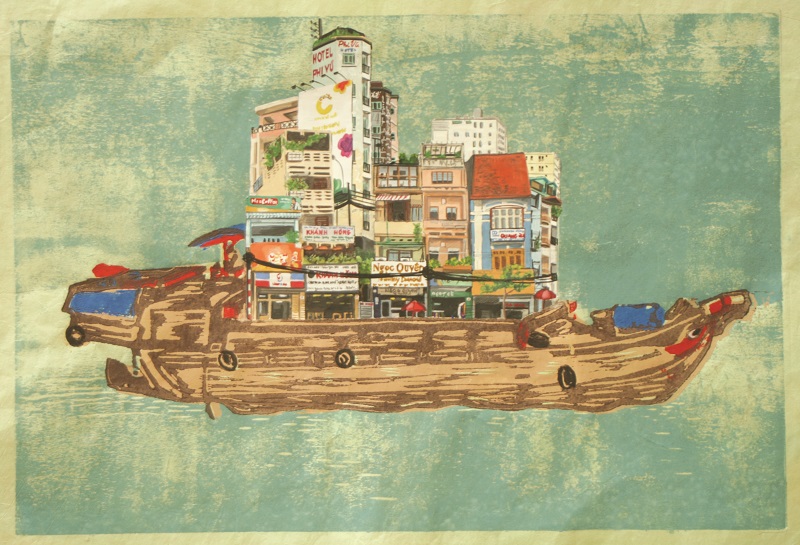 Born in Turin, Barbara attended high school in Florence and fell in love with both the city and her craft. “I knew I had to live there and painting was going to be my domain.” Armed with a diploma in Fashion and Theater Design and a diploma in Painting Conservation, she started out restoring masterpieces under the supervision of prominent restorer Edo Masini, Head of the Restoration Department at the Fortezza da Basso.

For her, restoration is “a way to pay respect to an artist’s work. What’s fascinating is to try to get back to the spirit of the artist – what’s underneath all the bad paint, bad layers. Instead of getting new canvases, artists used to paint on top of previous paintings, according to the different styles of the period. We once removed a very gross Baroque painting and discovered an amazing landscape from the 15th century. Time alters colors, pigments, and varnish, but to be able to bring it back is incredible.”

Her restoration work has taken her to many regions in Italy, the US, Austria, Pakistan and China. “I didn’t know I would travel so much in my life. Perhaps archeology would’ve been better for me!” she says with a laugh.

But even during those years of meticulous restoration, Barbara’s creative spirit shone through. “You have to be really respectful. You can’t interpret [the painting]. Although sometimes we did add a little petal on a bouquet for fun,” she confesses.

Another World With Children
Another influence on Barbara’s art has been her work with children. In Shanghai, she volunteered as an art teacher because her children’s school didn’t have any art programs. Here in Saigon, she currently conducts art projects at the Pho Cap School for street children, some who have developmental problems including Asperger’s Syndrome.

“I discovered that being around children takes you into another world. Their mind is so pure, their instinct still fresh, they’re not afraid of color combinations. At the very small [Pho Cap] school, we did abstract art for the first month to free their minds. If you’ve never seen art or only very traditional art, it can be very limiting, just copying. I wanted them to use colors to represent themselves, not just through their true features. So for instance, I didn’t let them use black for their hair. I wanted them to see things from a different perspective. You can ask them ‘Why did you draw it that way?’ and they’ll tell you. They’re opening your mind. They have a different point of view. I found it very inspiring for my own work. The funny thing is that in the studio, it’s mainly you and the painting, but in the chaos of 20 children in the room, painting can be extremely exciting.” Back in her District 2 studio, anchored by a printing press brought over from her time in China, and littered with tempera paints, photographs, carving tools and rolls of Chinese paper, each work from Barbara’s Cargo series starts off with creating prints of the barges made from plates carved out of plastic board using wood carving tools. Experimentation and a keen sense of spatial relations are key, as a separate carving plate is required for each of four or five ink colors. The subject matter comes from a collection of photographs, from which Barbara creates stencils on a transparency placed directly on her computer screen. These images are later photocopied and meticulously hand painted, cut out and then reassembled onto the prints of the barges. The result is a stunning series of vibrant, exquisitely detailed multimedia prints which incorporate elements of Vietnamese life such as religion, community and the ubiquitous motorbike. “In China, there are lots of motorbikes and lots of cars. You’re often stuck in traffic because of the car. Here cars are stuck because of motorbikes. Motorbikes are freedom,” she says.

One of her works depicts a barge laden with religious icons. “Everything is alive here. You see Buddha there, the Virgin here. It’s not just from the temple. I was struck by the mélange of religions in the Mekong Delta. There might be an image of the Virgin Mary but with incense in front of it. Religion is really part of the life here. The soul of the people is much stronger. It’s so different from China [where Barbara lived prior to Vietnam], where there’s almost an absence of religion. There’s nothing much left besides money.”

Barbara also draws inspiration from the little things that are part of her new home. “What strikes me is the perfume of the streets. Even with the heat that we have, there are no bad smells… unless you’re in a fish market! But otherwise, there are lots of good, positive smells coming from fruits and flowers. Well done HCMC!” she says with a flourish. “And the orchids – you see them everywhere. You see little jungles on tiny balconies. I also see butterflies in the fields when I walk my dog. They cluster together, fly in communities, like HCMC where the idea of life is community, one on top of each other, really living together. In my print, you can see one butterfly is trying, and one has escaped.” 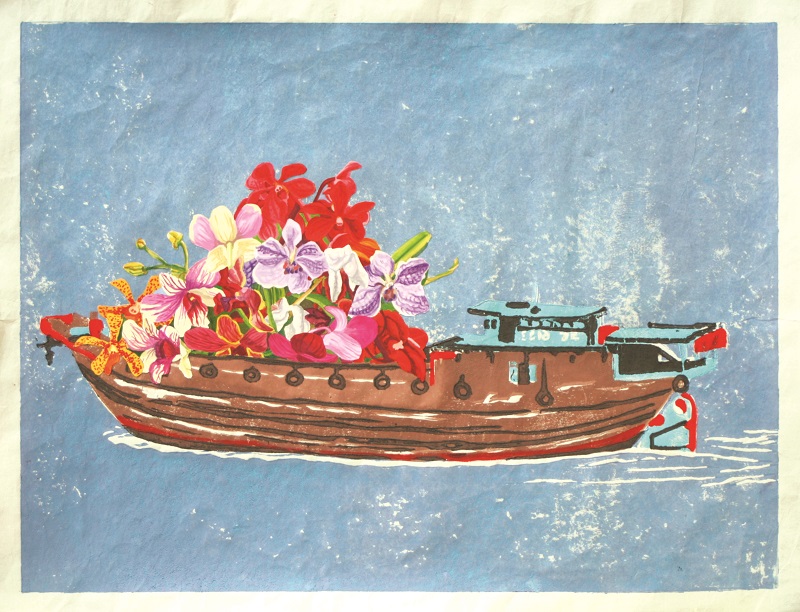 If you’re looking to buy one of Barbara’s originals, you may be too late. “I make work and then sell it and then it’s over. I like the idea that my things are going to be around the world in someone’s house. I haven’t thought much about commercializing by making postcards and pillowcases. These are unique things – when they’re gone, they’re gone. In China and Vietnam, people always copy things, but my work won’t be so easy to copy.”