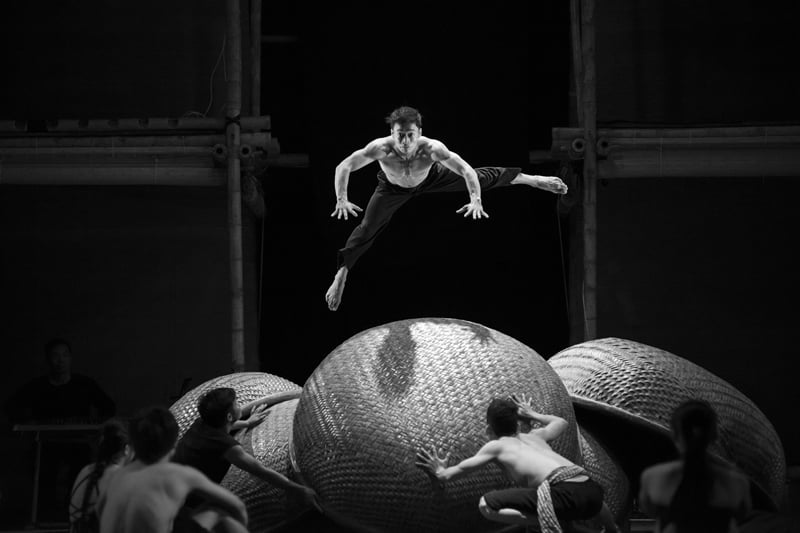 It’s known as the machine and right now at least, it’s anything but well-oiled. In this particularly difficult sequence, dozens of bamboo baskets must make their way up to the top of a three-level platform, then zigzag down bamboo poles in a human-powered perpetual motion machine moving at dizzying speeds. One break in concentration on the part of just one group member and it all falls apart. During this afternoon rehearsal, tempers flare amongst the group of multi-talented 20-some 20-somethings. Before long, though, the team starts to gel, baskets are moving with clockwork precision and the final performers slide down in a fit of giggles. This is AO. 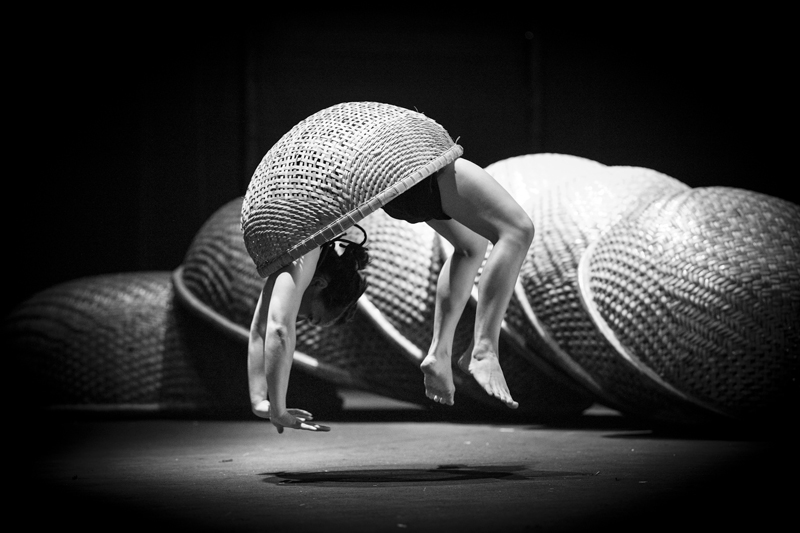 With Vietnamese accents, À Ố is pronounced Ahhh! Ohhh! ― expressions of surprise that this reinvented show has elicited from fans around the world ― a giddy combination of acrobatics, contemporary cirque, dance, martial arts and music. It’s Stomp! meets Cirque du Soleil meets hip-hop dance battle meets Ringling Brothers all set to the live soundtrack of Vietnamese opera, heart- stopping drum beats and haunting solos. There’s no real storyline to the non-stop hour-long show other than the bamboo props that are part of every act ― trays doubling as lily pads or Matrix-style projectiles, coracles as launch pads or a giant pendulum from which performers hurl themselves, and huge bamboo poles that morph from delicate monkey bridges to the walls of a vibrant tenement. It’s frenetic. It’s sweet. It’s chaotic. It’s powerful. For all those disparate reasons, it shouldn’t work. But exactly because of all those disparate reasons, it does.

Created in 2005 in Hanoi, the original show (called “My Village”) went on to tour Europe and Asia, with more than 300 shows in three years. In 2012, the creators brought the show to Ho Chi Minh City, but with a distinctly southern vibe. Where the northern show is softer and more cultural, the southern cousin, just like its new home, is more brash, fun and out to impress. 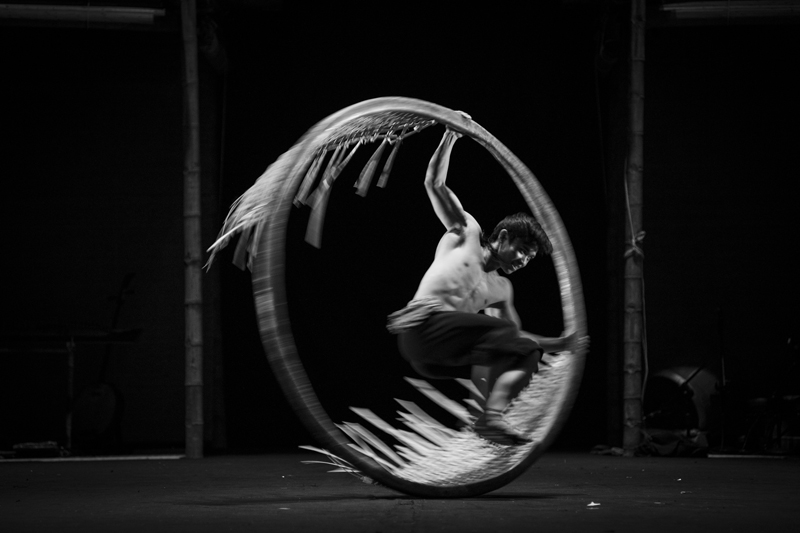 AO doesn’t quite fit any mold, and that’s probably because its 20 or so performers don’t either. Each with a background in dance, stuntwork, Parkour or circus, they’re more likely to be found actually doing Spiderman moves than watching them in a movie theater somewhere.

“Ever since I was a kid, I’ve never been able to sit still. Even while I was studying Business Admin (my parents wanted me to get an office job), I was doing hip-hop dancing in a crew, then Parkour then stuntwork,” says Tho, 24, the troupe’s star breakdancer and budding choreographer. “AO is all about working together. It just takes one person to mess up a performance. But what we’re trying to achieve here is to dignify everyday [bamboo] objects, for people to remember Vietnam, for them to say ‘ahhh! ohhh!’ just like the name.” 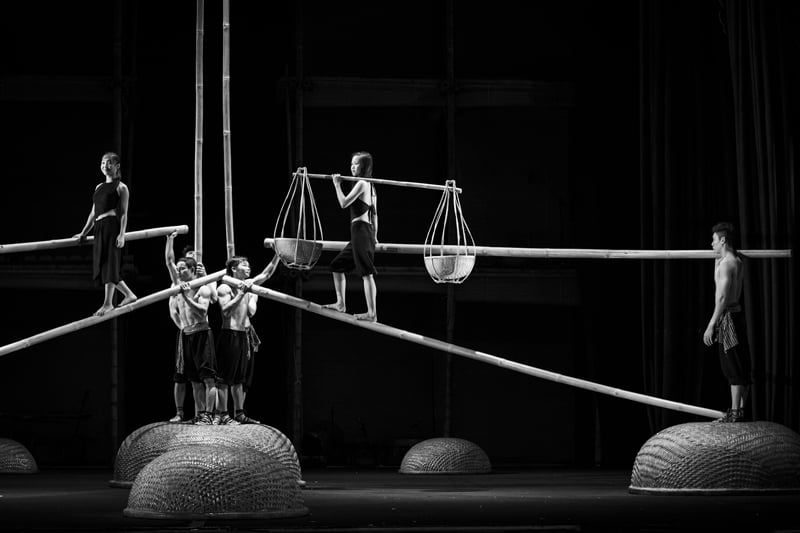 “This is so different from a regular circus,” says Ly Xa, 27, who has been involved in circus training since the age of 11. “Those basic moves have been passed down from generation to generation. You could be doing those same moves for three to four years in the circus. With AO, it’s all about the creativity. It’s different every time. It’s like life. It’s no longer a performance,” she says in between practicing contortionist moves balanced on an upturned basket.

Meanwhile, Chinh Phu, 22, uses his Parkour experience to map out exactly where he wants to land as he flips from the swinging bamboo basket boat suspended by ropes from the ceiling of the Saigon Opera House. “I’m the only boy in my family, so my parents are really worried about my health. When I was little and tweaked an ankle or something playing basketball, that was it; my parents hardly let me out of the house. I had to tell them I was going out to study, but in reality, I’d be doing Parkour in parks and on the city streets. I never imagined I’d be part of a contemporary circus show as great as this.” 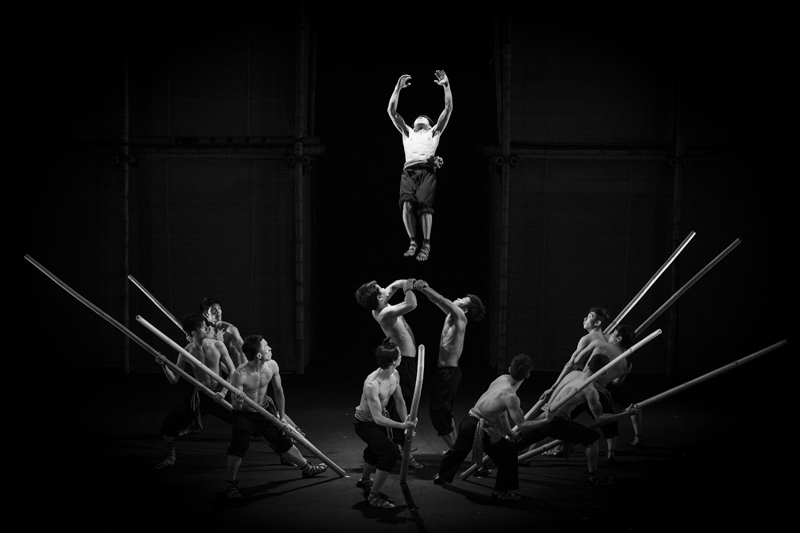 AO has three to four regular performances each week at the Saigon Opera House. Tickets for the electrifying hour-long show start at VND599,000. See www.aoshowsaigon.com for booking details.

Images provided by The AO Show