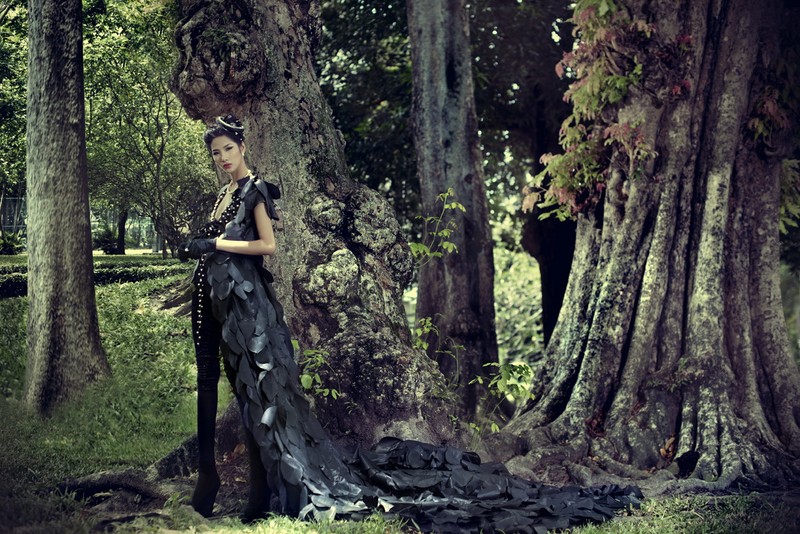 If you were watching the 2015 New York Couture Fashion Week earlier this year, you’d probably have been intrigued by the sole Asian collection featured out of those 300 that were showcased at the event. Vo Viet Chung, who is popularly thought of as Vietnam’s foremost ao dai designer, presented a total of 30 jet-black creations that seemed a world away from the figure-hugging traditional gowns most Westerners would associate with Vietnam – a fascinating series of garments in shimmering ebony, scuttling back and forth along the catwalk as if in open defiance of the white uniforms of Saigon’s schoolgirls.

If designs like these could ever be labeled ao dai – and Chung is weary of constantly hearing the term paired with his name – then they’ve undergone a staggering transformation. Most designers wouldn’t dare to mess with Vietnam’s national costume, but Chung has made it work, and he’s now on the cutting edge of authentic Vietnamese fashion to the extent that he’s arguably the leading figure in the whole industry. If you’re skeptical, take a closer look at his oeuvre and you’ll spot his game-changing insight: take a highly-specialized garment, break it down, and use those elements as the starting points for all other styles of clothing – evening dresses, party gowns, blouses with pants – as if they’d actually evolved from Vietnamese precursors. It’s not just a matter of slapping a swallowneck collar on a Western shirt and calling it Vietnamese – these are quintessential reconstructions of the fashion spectrum reformed with Vietnamese aesthetics.

Vietnam is still a traditional country for the most part, and there are voices claiming that this kind of monkeying with the national dress is disrespectful. Chung himself is dismissive of such claims: “There are many people who see the ao dai as something spiritual,” he says. “I feel the same way, but I don’t see it as being something like a monopoly. My wish is that women all over the world can wear it if they like it, just like you can wear a qipao when you’re in Shanghai.”

He wouldn’t be the first to overturn the national costume. If we’re being honest, the ao dai isn’t really this country’s traditional garment at all – that would be the ao thu than; or if you’re from here in the south, the ao ba ba. The ao dai actually has its origins in an ethnic Cham tunic that was originally adopted to defy the Chinese; it was modified in the ‘30s by an artist from Hanoi to reflect French graces, and then again in the ‘40s to de-Westernize the garment and instill a more Oriental sensuality. The modern version of the ao dai essentially dates from that time, a convergence of the country’s cultural forebears and colonial past. 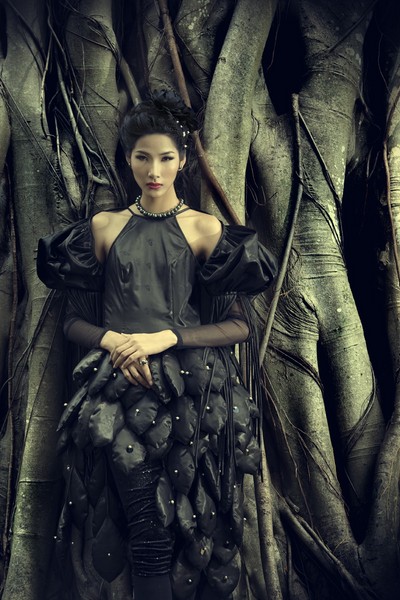 Part of the reason why the gown stirs up such patriotism is that, from a tailoring perspective, it’s an extremely complex and highly personalized garment. This hasn’t stopped the advent of cheap ready-to-wear cotton varieties you’ll find at Ben Thanh Market, which probably represent far greater travesties against the sanctity of the Vietnamese costume than Vo Viet Chung – whose showroom sits hidden in plain sight just behind the market on 115 Ly Tu Trong. Here, the designer is only too pleased to demonstrate his creative process to visitors at the store.

“This is a regular design for an ao dai as you can see right away,” he says, pulling out a stunning classic form – priced, incidentally, at several thousand US dollars. “And this one is also an ao dai, but I’ve cut it as a dress. As you can see, it has no collar, but it’s of the same form. This one is also an ao dai. It looks like a gown, right?” “Foreigners who visit my store seem to sense that the ao dai is very important,” he says, “very spiritual. I know that, but for a designer just like me, I choose to make it look more relaxed, more open, like these ones I’ve shown you. I can cut it shorter to make it into a dress; I can make it longer so that it becomes a gown; but all my pieces are made of materials that are exclusively used for ao dai.”

In fact, if you do take a closer look at the fabric, you’ll see the broader dimension of his work that Chung would much rather be associated with than merely being known as a designer of ao dai fashions. Just as he’s brought the innocent subtleties of the traditional dress into full, wild maturity, so too has he rediscovered a forgotten cultural resource and brought it back to life. If Chung is to take his place in history, then he should above anything else be remembered as the reinventor of lanh my a, mac nua, and tan chau silks. 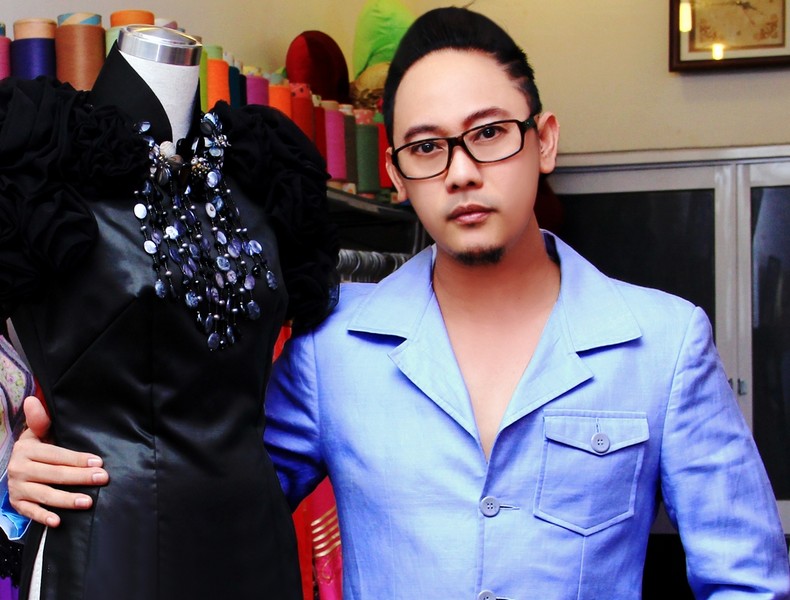 “It was a matter of chance,” he says of his rediscovery of the materials. “I noticed in our family photos that my grandmother and my mother wore ao ba ba and the Mekong-style black pants. I asked my mother about the fabrics, and she explained that they had a long history, but were no longer available in our modern markets. Lanh my a is particularly amazing – I remember examining my late grandma’s ao ba ba and realizing that it was something really special. The material is dyed with the resin of a kind of wild fruit named mac nua. The rainwater makes it look more beautiful, stronger, and it also becomes smoother over time. At that time, I had my mother and our relatives in the Mekong, Tan Chau, and An Giang help me to figure out how I could reproduce them all.”

“When I watched Fashion TV or read magazines like Elle, I realized that Vietnam had definitely never acknowledged a traditional material and brought it to the modern world,” he says. “We always import our materials from overseas. So I thought that it would be great if I could bring out a forgotten traditional material comparable to modern ones all over the world, and upgrade it to an international standard. So that’s exactly what I did.”

“Maybe the path I chose is different from other designers,” he admits. “I love renewing these materials, I love taking these ordinary things that were once connected to the peasantry, and elevating their status to make them high-class materials comparable to Chanel or Valentino products. That’s why I like to revive these materials and give them a new look, a new context, at the fashion weeks of New York or Paris.”

Despite the unique qualities of the Vietnamese materials, Chung’s greatest hope is to make them more accessible to buyers overseas. “I’ve found that in order to introduce the Vietnamese culture to the world through the ao dai or mac nua silks, it shouldn’t be done on a rigid framework,” he says. “Instead, it needs to be more relaxed and open. A foreign guy looking at my designs should feel that his wife, his sister or his mom could wear it. I think that five or ten years ago, it was necessary to wear an ao dai to introduce Vietnamese culture to the world, but now that’s no longer true. I believe that in order to attract people to love our traditional materials, we should create a non-particular costume. It just shouldn’t be confused with other cultures and should be made from our own materials. It should give people a feeling that ‘that could really work on me.’”