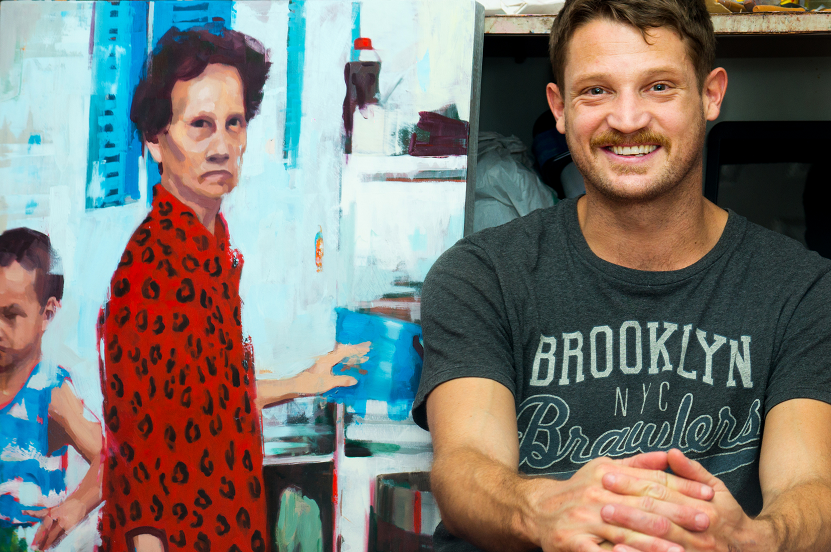 Artist Will Whitehouse and his human figures

Will Whitehouse’s studio is small. There are beds all over this city that are wider. No matter; space itself is not a prerequisite for art. But good light is, and one wall of his studio has windows open to soft natural light and looks across Rear Window style to his neighbor’s hallway and living room – close enough to having running conversations without leaving home. The other wall is a floor to ceiling mirrored closet that was there when Will moved in – the mirror tricking you into believing there is more space. For an artist, such mirrors would be handy for self-portraits, but there were no traces of any in his studio. There were sketches and watercolors of figures on the wall, and works of faces in progress on his easels. There are tubes of paint resting on tables and windowsills and an old pair of shorts covered with more oil paint than a Pollack drip painting lying on the floor. There are jars with bouquets of brushes and photos of figure studies on a side table, partially covered by rags and stray brush strokes of color. In opposite corners, the easels were turned to and from the angle of the sun. In short, the studio is ordered chaos, which seems fitting, for wasn’t the first creator celebrated for making order out of chaos?

We sit down just outside his studio, with the door open so that I can see some of his work while we talk. They are all interpretations of the human figure and they are placed in such a way as to seem to be listening to our conversation. But they also serve as points of reference when words don’t work. 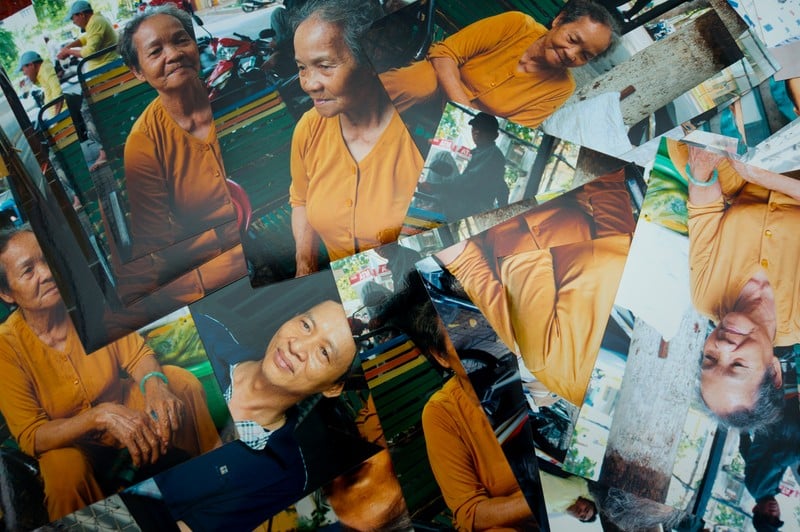 The conversation begins in Hobart, Tasmania – the island 240km south of southern Australia – a wildly beautiful place to grow up, run around and get out. Will headed to Sydney with a degree in marketing, which was essentially a misguided attempt to play it safe with the idea of a career. He quickly shed that notion and spent the next years in Australia washing dishes in a Sydney hotel at night and revisiting his first passion of drawing the human form during the day. Growing up in Hobart, Will’s mother had fostered his talent by taking him along to her art school. In Sydney, it was a teacher in a life drawing class that opened his eyes up to the joy of drawing the human figure and form – mastering the proportions and expressions. “It was my first time really trying to capture what I saw in a literal sense, rather than something impressionistic or symbolic,” he explains. 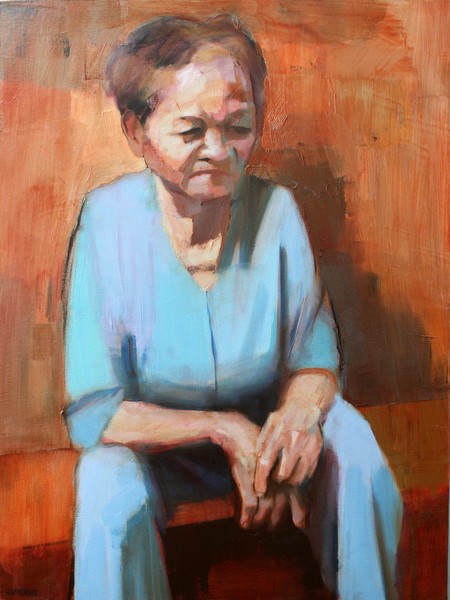 Will would then take this rekindled enthusiasm for capturing the human form and spirit back to Tasmania for three years of art school, where he would struggle with theory and conceptualism but embrace the work of artists such as Manet and Singer Sargent: artists who advanced color and tone in portraiture and in painting the human form. Ask Will about Manet and he will give you ten minutes on the subtle shifts between pinks and greens in the skin of Manet’s people. This will lead to a digression on detecting the different skin tones in people across different continents and how he is using more purple in his paintings of Asians than he expected. 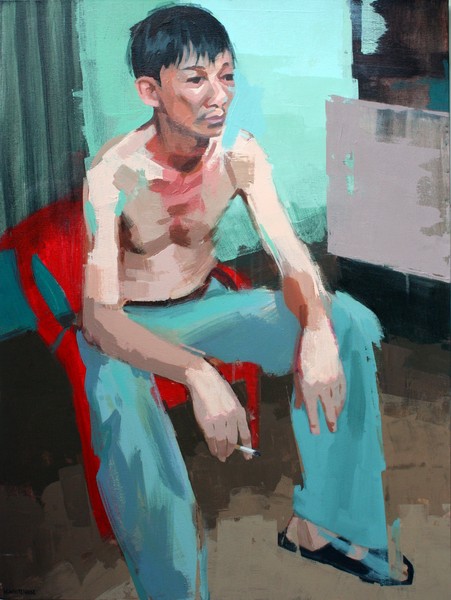 From the starting points of ‘draw what you see instead of what you think you see’ and ‘get through the paint to find the figure,’ Will’s work evolved in an emotionally realistic sense, favoring an Impressionist approach over a more photographic approach (e.g., Caravaggio). “I was just exploring paint; it was less a focus on trying to represent a figure realistically than trying to paint more expressively, to enhance the emotional context of the work.” This exploration has led Will to begin to experiment with the abstract. Form-wise, his subjects are still realistic, but now he is embracing what he finds interesting in a feature even if it strays from correct proportion. At times, he loses the figure completely in order to try to focus on painting for the sheer joy of painting “to not have the image hindered by any recognizable form.” 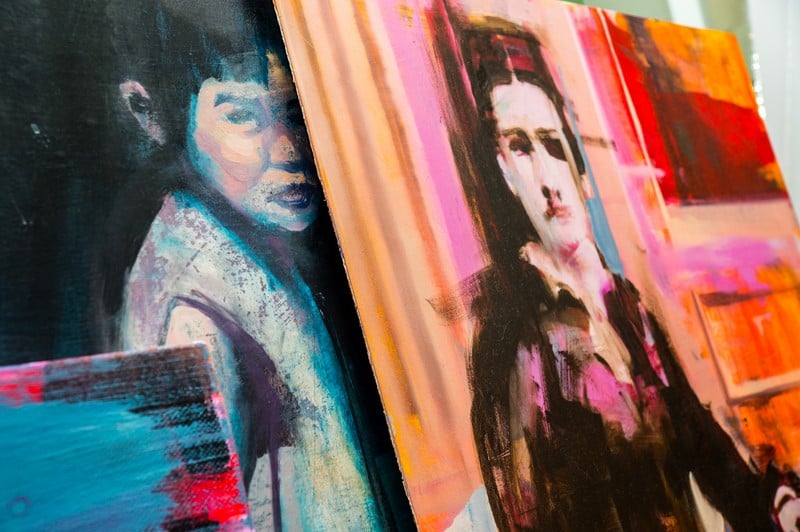 Listening to Will, patterns emerge. There is his work as a dishwasher and, earlier, in a full-service gas station. It’s manual, repetitive, unpretentious work. The dishwashing was instrumental in helping him solidify his desire to be an artist: the repetitive nature of the work allowed his mind to wander off, to sort things out, and to revisit what he’d seen and captured that day. And it is not hard to see his time back in Hobart at art school, where almost all his work was single subject and rarely ever two figures on one canvas, as a time of heavy introspection. His paintings showed the heavier side of the human condition, with loneliness and subjects trudging through life. These patterns come together to find an artist who modestly underestimates his facility with words but that really does not matter – what he wants to say is all there in oil on canvas. 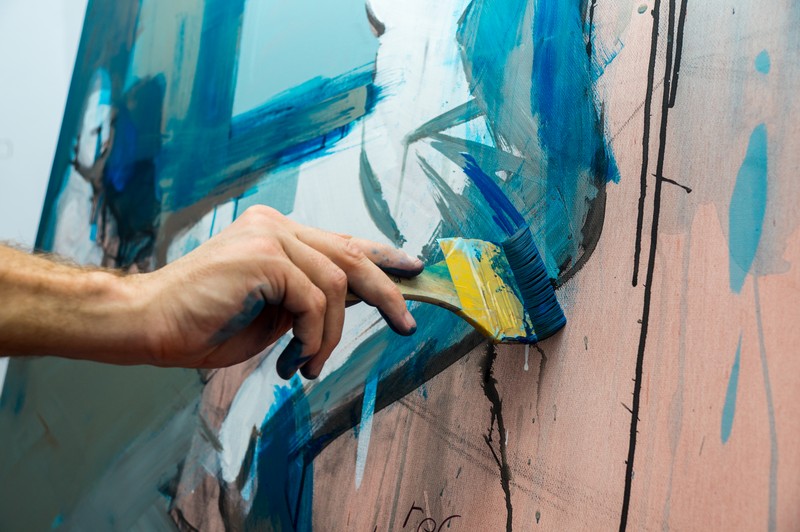 Will is clearly a humanitarian and a humanist. He likes people. He is fascinated by them, both in their unifying form and in their personal internal narratives. Will sees the emotional content of people and the stories his subjects have in their body posture, in the way they tilt their heads or round their shoulders. He is equally fascinated in the dynamics of anatomy: the range of motion in a hand or torso, as he is in the expression such dynamics lend to the story in that human. For Will, the trappings of rank and worth in society are false starts; he’d never do a stiff portrait of a subject shielded by a costume and surrounded by possessions: there’s no air, no life in such statements. To hear Will talk and to see his work is to recognize an artist who is all about the unmanicured feeling in his subjects. 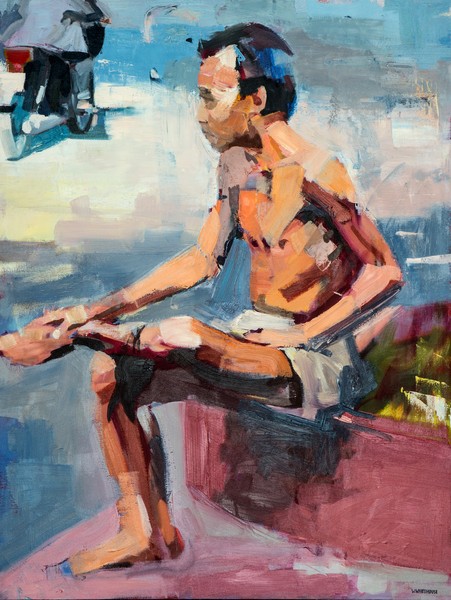 This preference for the unguarded, honest pose has made Vietnam a perfect destination for him. Every street, every shop house offers a story to someone with eyes practiced enough to find it. There is plenty of pretension here, with incomes rising and urban populations keen on consuming accessories that advertise wealth. But there are far more who still live life more modestly, more openly. Will’s canvases show Vietnam as it truly is, and the people as they really are. They are poignant without slipping into sympathy or nostalgia. 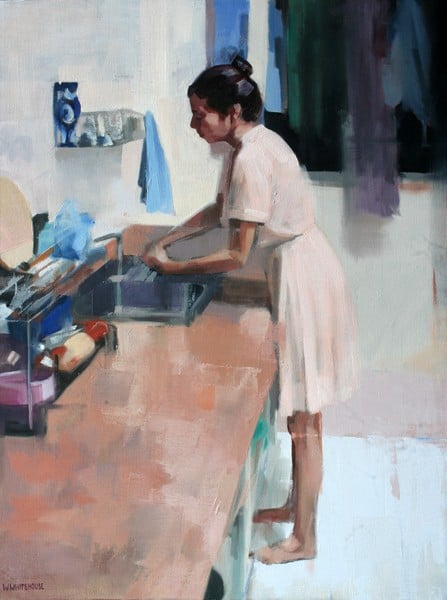 Vietnam’s hotels and nicer homes are filled with paintings that show Vietnam as a cliché: ao dais and bird cages and falling autumn leaves. They are postcards of saccharine landscapes – and they seem to sell well to tourists. But if you ever want to have the real flavor and expression of Vietnam, to recognize the entire country in a single subject, you would do well to find Will Whitehouse’s work. He has plans and they involve a transplant to the desert, so catch him now. It would be a pity to discover him after he’s left, and the easiest place to find it is at VinGallery (6 La Van Mien, Thao Dien, D2). 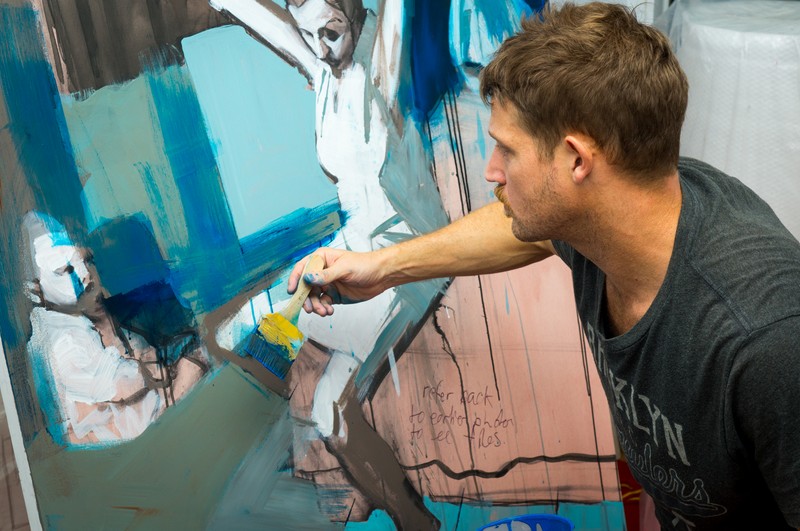