Meet the other Mr.Big. He’s not very tall. He’s not even large. And he has nothing to do with Carrie Bradshaw. But he’s been Mr. Big since birth. You see, his parents owned a heavy machinery shop in Bangkok – buying, selling, repairing. Of all the brands they sold, the BIG brand sold best. BIG sold so well that the mother thought it a lucky name. So when her son was born, she blessed him with the good fortune of a popular, respected, well-made machine. And the moniker has served him ever since.

Nowadays, Mr. Big makes his living as an artist. But it’s not surprising to learn that it was his father’s gift of another machine, a Kodak instamatic camera, which pushed him at five years of age to begin to explore the visual world surrounding him. As a child grown up around bolts and gears, gadgets and levers, Mr. Big had an instant comfort with his Kodak. It was simply a small machine that captured light and shadow on colored film. The biggest difference between the machines in his parents shop and the one he wrapped around his neck was the portability of his light box as compared to the heavy duty contraptions back home. As with many other photographers, Mr. Big’s camera taught him how to look at life, and this training of the eye helped him to widen his artist portfolio to painting and design. 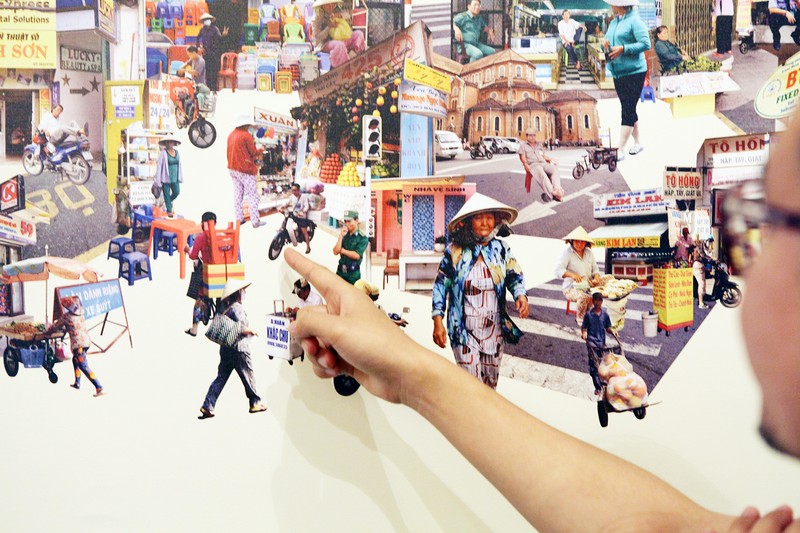 All of this leads up to Mr. Big’s current exhibition at L’Usine Le Loi. Mr. Big’s exploration of the world around him began with his own neighborhood, then his own city, and now the cities that surround the region. He takes photos of their character (and their characters), their everyday personality (and personalities), and their eccentricities (and, when he can spot one, their eccentrics). He fashions all this into a collage that serves as a statement of a city in a way that no map or guidebook could as easily reproduce. His canvases come out like well-ordered chaos, like labyrinths or mazes, or like visual symphonies somewhere between Gershwin’s Rhapsody in Blue and Stravinsky’s Rights of Spring. If the gift of the foreigner to the local community is the ability to see critically what they no longer notice, then Mr. Big’s cityscape collages are both playful and prescient.

I sat down to talk with him about his work on Saigon before the opening of his exhibition. The first impression is one of good nature and happiness, and the way he sits and smiles and comports himself with graciousness puts you back on your best memories of Thailand. He says he first came to Saigon to explore it as a subject back in 2012. He loved it then, and loves it now, but says when he came back this year so much of the city had changed. Fortunately for him, the chaos of Saigon’s traffic had kept up its frenzy, and so he spent much of his time reveling in the craziness. I told him it’s quite a statement for someone from Bangkok to find another city’s traffic patterns to be extreme, but he just smiled and said, “Bangkok traffic is crazy but with a system. Here in Saigon, it seems there is more crazy and less system.” I pointed out that this is both true and a common remark from most tourists from almost any other city (except perhaps some cities in India), and that it takes just a bit of time to see the system within the chaos here. But I agreed that for both the tourist and local alike, one should never get so confident as to think he’s mastered its great unpredictability. I asked him what he looked for to shoot in Saigon, and he told me he only had five days, so he had to rely on the advice of his friends and those willing to share what they had enjoyed in their travels here. Beyond that, he looked for what he tends to look for everywhere: the honest life of the street. ‘These people are the heroes of the city to me.” The shopkeepers, the people who bring their produce to the markets, the goods that spill out onto the sidewalks from the stores, and the goods that are set up in any shady spot by someone with anything to sell. Unsurprisingly, Mr. Big has a great affinity for the sections of the markets that sell and repair machinery, seeing in them a reminder of his childhood and his loving parents. Also unsurprisingly, Mr. Big prefers to focus on what can’t be replicated anywhere else, so the big buildings, the international brands and stores fail to catch his eye unless it is out of a sense of commentary or irony. But then he gets a sparkle in his eye and says, “I love the small houses, the hand-painted signs – the human level touches that make the city so unique. And what I really love is to see people sleeping on their motorbikes – the children in between their parents on the way home, the men on the corners after lunch. There are many more cars here than in 2012, so the nature of the traffic is changing a bit, but I still love to see that people are so at home already on their motorbikes.” If you missed Mr. Big in person, you can still find him in L’Usine. He is in each one of his city collages, and searching for him is a bit ‘Where’s Waldo?’ but with the added benefit of being forced to look hard at what he has chosen to represent Saigon. Some of his choices are iconic, some expected, some surprising. All still serve as great reminders of the individuality of that this city still enjoys despite its rapid redevelopment. And that is Mr. Big’s gift to you: a reminder that you are lucky to have it all – the past, the present, the heroes of the street – swirling around you. 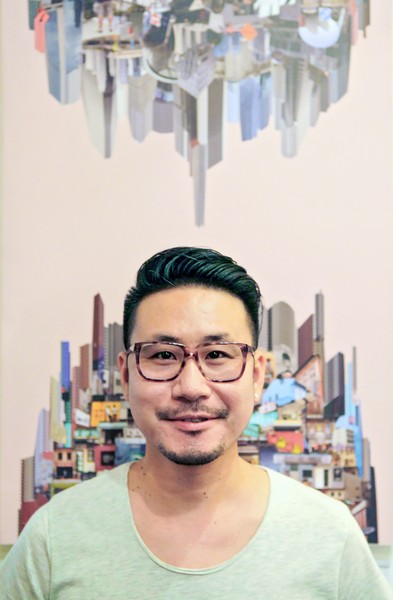