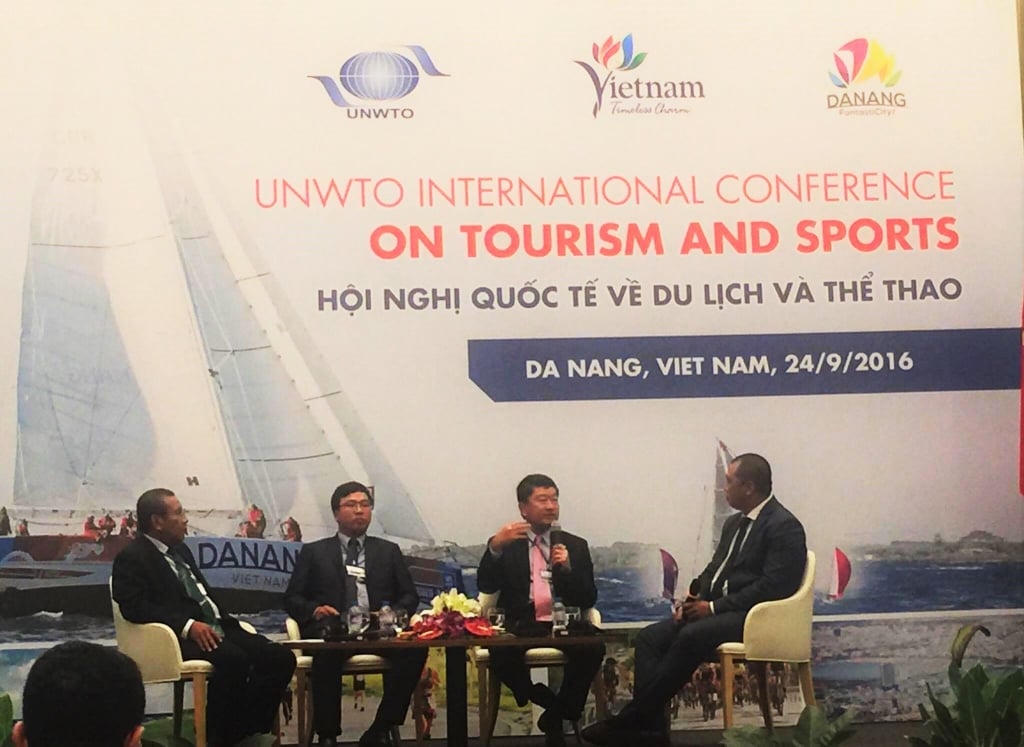 With the Prime Minister’s objective of building tourism to 10% of Vietnam’s GDP in mind, The Grand Ho Tram Strip last week hosted a panel of some of Asia’s leading sports and tourism authorities on the growth of Vietnam’s tourism industry on the back of major sporting events.

“The link between sports and tourism builds bridges between the world’s people, and it brings nations closer to peace and prosperity. The cross section of sports and tourism has developed into a key driving force for growth, and we’ve seen benefits for many nations since the UNWTO and the International Olympic Committee teamed up in Barcelona in 2001,” Mr. Đam said in his introductory remarks.

“We brought the eyes of the world on to the beauty of Vietnam,” Mr. Vinh said of the Asian Tour event, which brought a star-studded line up of players that included eventual winner and current world number 12, Spaniard Sergio Garcia to Vietnam for the first time. “We had players from around the world, who had never even considered Vietnam to be on-the-map of world sports tourism offer nothing but praise for the incredible facilities we have at Ho Tram, and for the warm and welcoming reception that they received from everyone they met in Vietnam.”

The event – which was broadcast to 100 million households, shone an unprecedented spotlight upon Vietnam, not just in terms of the size of its audience, but for the first journey Vietnam has made on to the world sports-scape. The event was later crowned Asian Tour Event of the Year, and saw its status upgraded to Ho Tram Player’s Championship for future tournaments, making it the flagship event on the Tour’s calendar.

His international counterparts concurred, highlighting similar experiences for Malaysia with its hosting of the Formula 1 Grand Prix annually in Sepang, and Thailand with the promotion of its national sport – Muay Thai – and its roster of golfing events.

Mr. Thiện presented an update on the nation’s tourism statistics, saying that the country had drawn 7 million international visitors in the first nine months of the year, and that this represented a 25 percent increase YOY. He further remarked that tourism accounted for 6.6 percent of GDP in 2015.

“Prime Minister Phuc has stated repeatedly that he wants to drive this figure to 10 percent,” said Mr. Michael Kelly, Executive Chairman of The Grand Ho Tram Strip. “We have put this objective at the forefront of our own targets for growth, and it was an honor to be the only Vietnam tourism company represented on this panel, and to highlight the successes of our Ho Tram Open to delegates from around the region. With over US$1 billion in deployed and committed investments to date, we are the largest international investor in Vietnam’s tourism history, and uniquely qualified to present our case to the audience, and we would like to thank the United Nations for offering us the opportunity to do so.”

The Grand Ho Tram Strip is the largest U.S. private equity investment in Vietnam. In addition to promoting Vietnam on the global stage, the management team at The Grand Ho Tram Strip, under the guidance of Executive Chairman Michael Kelly has played an integral role in deepening the commercial and business linkages between the two countries. As a committed partner to Vietnam, The Grand Ho Tram Strip is dedicated to the country’s broader socio-economic development goals. In addition to charitable efforts to support disadvantaged families in its home province of Ba Ria-Vung Tau, The Grand Ho Tram Strip has partnered with local vocational schools to help build domestic capacity for the tourism sector, raise the standard of Vietnam’s tourism services, and provide opportunities for local students to advance in the field of hospitality management.