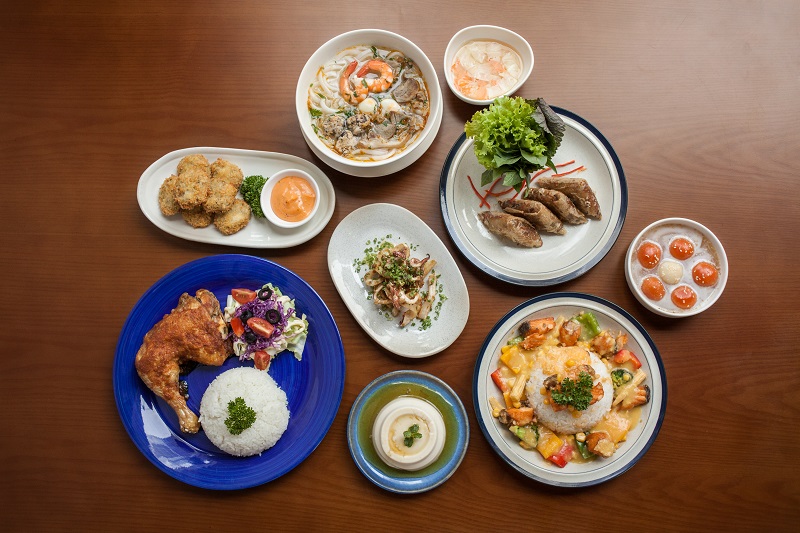 Highlighting the pure, delicious simplicity of rice and comfort food

In Vietnam, rice is life. Even a map of one of the world’s top rice-exporting countries looks like two rice baskets hung on a long pole, anchored by the rice-growing regions of the Red River Delta in the north and the Mekong Delta in the south. Much more than a staple, a Vietnamese meal simply isn’t a meal without some type of rice on the table.

Recently opened in December 2017 by entrepreneur Le Bao Duy, Rice Restaurant & Bar (Ground floor of the Landmark 3 Building in Vinhomes Central Park, 208 Nguyen Huu Canh,Binh Thanh) celebrates this most basic of grains. Before even picking up the menu, the star of the eatery is evident in young rice plants used as table decorations and votive candles set in bowls of unmilled rice.

At just four pages, Rice’s menu is blissfully simple, showcasing rice in all its glorious forms as well as dishes from Bao Duy’s home province of Nghe An in North-Central Vietnam, and more traditional fare with a cosmopolitan twist. Bao Duy spent three years living in Melbourne, known for its multi-cultural fusion of cuisines, and his worldliness, along with flavors picked up in fine dining kitchens including Park Hyatt Melbourne and Saigon’s own Shri and Sorae, find their way into unexpected combinations throughout the menu. 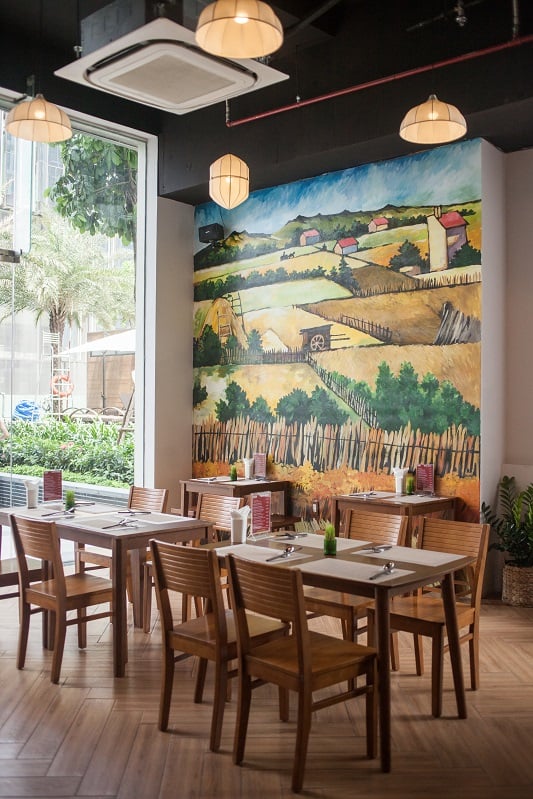 An example is the Sun-dried squid appetizer (VND180,000). Normally a one-dimensional, jaw-aching snack, the preparation of the dried squid here takes a page from Japanese cuisine, using rice wine instead sake to tenderize and remove the fishiness of the squid, before grilling and coating it with a butter and garlic sauce for some pleasingly intense flavors.

Other appetizers are elevated versions of street food favorites, taken up a notch thanks to superior ingredients, as with the beautifullyfolded and generously-sized Deep-fried crab spring rolls (2 for VND50,000) with big chunks of crab meat and the Deep-fried fish cakes (VND140,000) with spicy mayo. Rice’s version of fish cakes is barely recognizable compared to the oily, flour-enhanced version usually found in markets. Here, they’re incredibly meaty to the point of being dense, and lightly fried with a coating of bread crumbs. The mild-tasting fish is an excellent vehicle for the fresh, grassy notes of dill, all too often overlooked here in the south.

The appetizers pair well with Rice’s innovative cocktails, some with Vietnamese rice alcohol, notoriously difficult to use in cocktails because of its overpowering presence. Gao tempers the rice alcohol with creamy homemade rice milk along with a fruity splash of Midori for a breezy concoction while Com (both VND100,000) ups the ante with the addition of bourbon whiskey and a slice of fresh ginger for heat. In both, the unexpected yet delicate flavors of young rice really do come through. 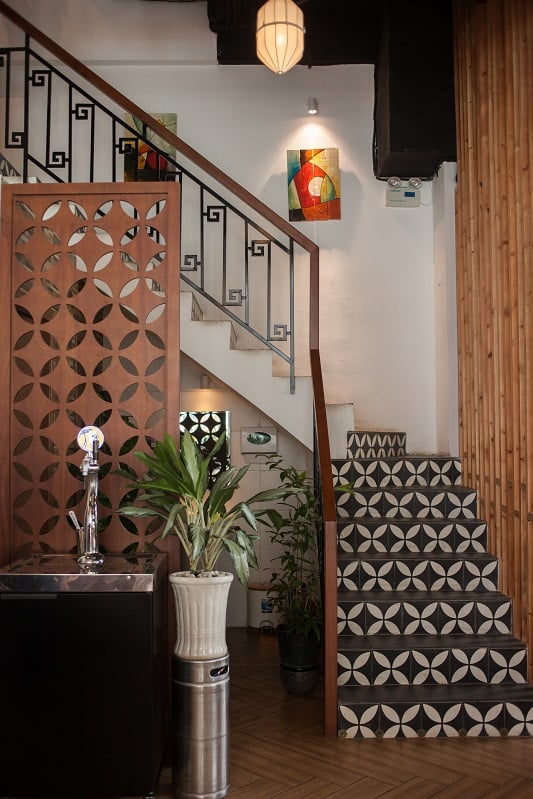 The Banh canh bot gao (VND60,000) also allows the udonlike rice noodles to shine through with the inclusion of quail eggs, tender pork meatballs, and slices of pork feet that have been stewed 3-4 hours, all in a thick, almost gravy-like broth tinged with turmeric.

Even plain white rice tastes better at Rice. The owner refuses to serve fried rice, or anything else that overwhelms the earthy goodness of their premium-quality grains. Instead, the rice shares center stage with Vietnamese favorites with Western twists like in the Salmon luc lac (VND120,000), 100g of cubed, sushi-grade salmon in a tart, creamy sauce that resembles lemon butter but is in fact passion fruit-based and the Chicken rice with a savory sweet sauce flavored with five spice and apples (VND95,000).

While Vietnamese savory dishes can compete with any other cuisine, typically it’s the desserts that are a letdown. Rice serves up traditional sweet puddings (VND30,000 each) that cleverly accentuate universally-loved elements while downplaying or all together altering the textures and flavors of Vietnamese desserts often found unpalatable by foreigners. The refreshingly cold Tofu pudding with ginger and palm sugar syrup goes down smooth and silky, not cloyingly sweet like usually found elsewhere. The potatoes in the Three potato pudding are steamed, mashed with a bit of butternut squash for natural sweetness, then reconstituted into chewy balls, for a much better mouth-feel than the usual straight up chunks of potatoes that look and taste like they have no place in a dessert. Wash it all down with a tartly sweet Green tea with calamansi and lychee or a refreshingly light Pandan tea with basil seeds (both VND30,000) for a pleasant ending to the meal. 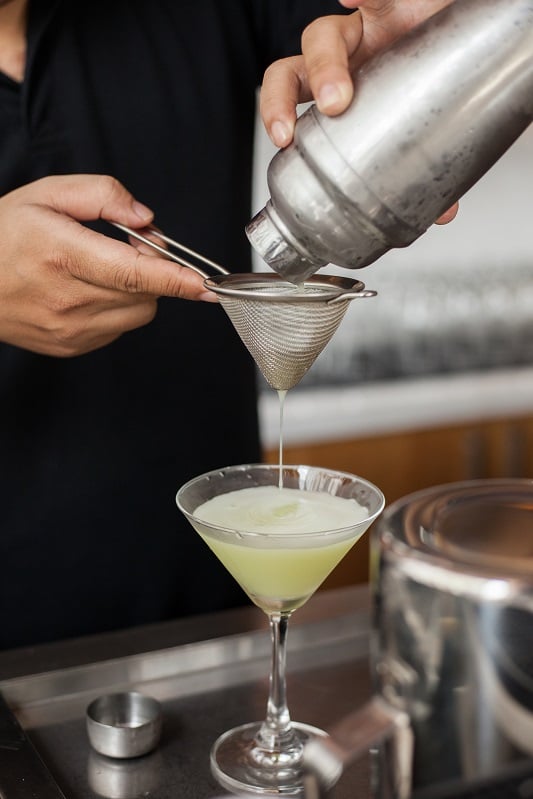 The only entrepreneur in a family of academics, owner Bao Duy feels like he has a lot to prove with his first foray into the culinary world. Thankfully, early signs say he has acquitted himself well in putting forward a casual-chic cafe with value-for-money offerings that showcase the very essence of Vietnam.