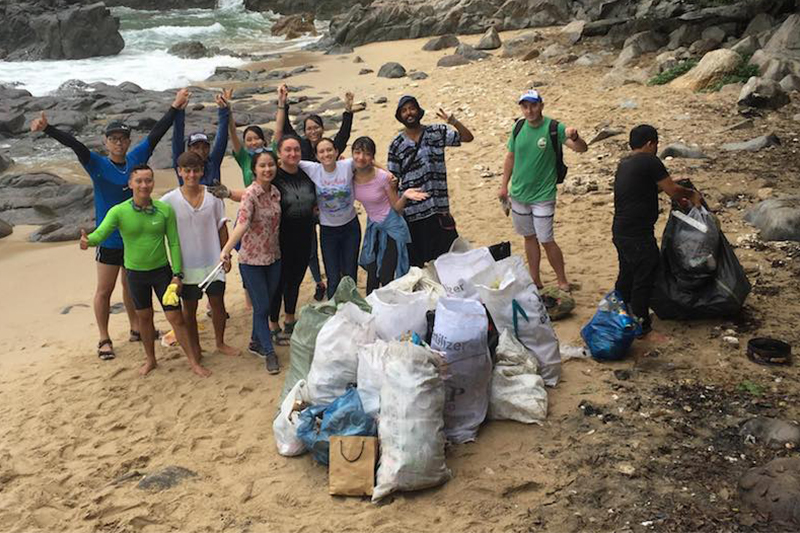 Living in Saigon, where the end of every trading day sees a tsunami of single use plastic piled high in drains, and where the river is becoming increasingly clogged with cups, straws and bags, it is easy to despair at the seemingly unstoppable negative impact humans are having on waterways.

Currently, the world’s biggest garbage patch is floating in between Asia and North America: the Great Pacific Garbage Patch contains some 80,000 tons of trash—much of it single use plastic—that makes its way daily onto the shores of South East nations, including Vietnam. “The main beach (My Khe Beach) is usually quite clear, especially during the high tourist season in the summer. I think every morning the expensive hotels pay people to go and clean it up. The smaller beaches don’t get so much attention and they are getting more and more full with trash.”

In October 2017 this situation prompted a diverse group of foreigners to found Precious Plastic Da Nang, an offshoot of a global initiative that is working with coastal communities all over the world to transform beach plastics into treasure. As Vera explains, the activities of the group are manifold:

“Regular clean ups of the smaller beaches are important. During the peak season we do maybe one clean-up a week on the weekend, which we advertise through Facebook as well as by word of mouth among friends and colleagues. Many of us are teachers so we also encourage our students to come along.

“But the bigger part of the project is machines that we are building at the University which can shred and re-mould plastics into new, recycled products that we can then sell, with profits going back into the project. Right now we are getting funds together for the second machine.”

As the above suggests, this high tech approach to beach waste has won the support of many in the local community and the group is allowed to freely use a space within The University of Da Nang. As well as housing the machines here, Vera and others also hold regular workshops with students, raising awareness of the enormous threat plastic pollution poses to the world’s oceans.

According to one of the group’s founding members Haylie Laursen, this practical approach to beach pollution is key to the Precious Plastic initiative, which seeks to find workable, long-term solutions to the mounting plastic crisis. Education, they hope, will ultimately lead to prevention:

Haylie says: “Precious Plastic Da Nang is a community of people working towards a solution to plastic pollution in Vietnam. Our goal is really to educate the youth of Danang so they can go on to educate others. From day one we have always said that we want to get it to a point where it is run and operated by locals so that the project continues even after we have moved on.”

The pair reports mixed success to date. Haylie says that while many locals will ‘like’ the group’s Facebook page, actually getting them to attend clean-ups is another issue. However, she adds that two local girls have now joined the group and this is driving more participation at the local level.

The challenge remains, however, divorcing people from the plastic tea cups, straws and bags that have become such a central part of daily life here in Vietnam that avoiding them is a difficult task. Again, though, progress is being made, with authorities beginning to acknowledge the tons and tons of ocean-bound plastic waste that bubble teashops in Danang generate each year.

Alongside clean-ups and lectures, the group also hosts regular art events that Vera—a keen photographer and artist—helps to organize. Working in collaboration with Sasa Team, a marine life group in Vietnam, she has staged photo shoots that explore the issue of pollution in a stylized and thought provoking way. She features these on her personal Instagram page, beautyisintheeyeinc.

“The photo shoots help us to look at plastic pollution in a different way; asking how it informs who we are, both personally and within communities. This was something I first started thinking about when I lived in Shanghai in China. There I first came to understand the terrible impact we are having on the world.

“From the train window on my way to work I would see the factories and coal plants belching toxic smoke and the greasy rivers full of trash. I came to Danang specifically to be a part of this group; to try to help stop this beautiful place from becoming something like this.”

Change is never an easy thing to affect, especially across cultural and language barriers. However, both Vera and Haylie are hopeful, claiming to already be seeing progress with young students who are starting to direct the behavior of their parents. As they continue their efforts, they hope for a time when Vietnam’s youth will be leading the anti-plastic charge.