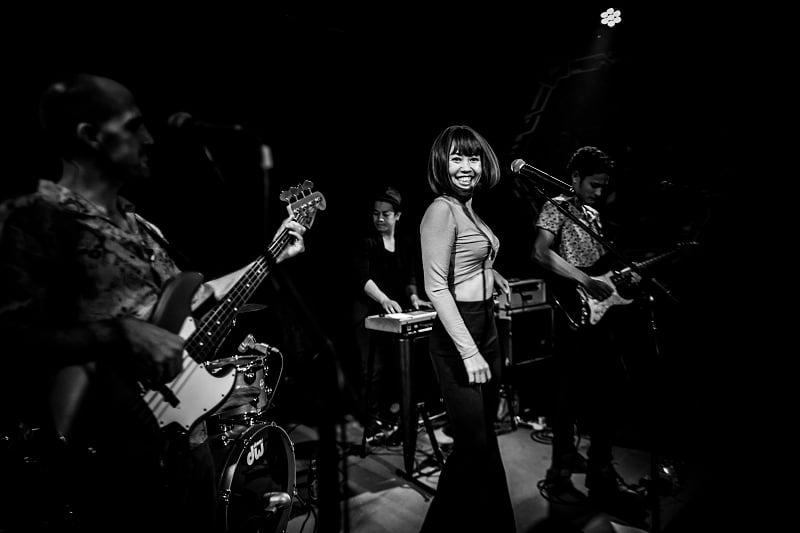 A revival of Saigon’s golden age of music

It might be Dance Club Arcan’s unique interior decoration and it’s oddly powerful soundproofing that always makes it feel like another world when you walk up to the venue from the quiet, otherwise unassuming homey Binh Thanh neighborhood it’s nested within. The night Saigon Sound Revival played and the club’s massive sliding front glass door opened, releasing the sounds of the city’s wartime era rock and funk into the street gave it an especially otherworldly picture. 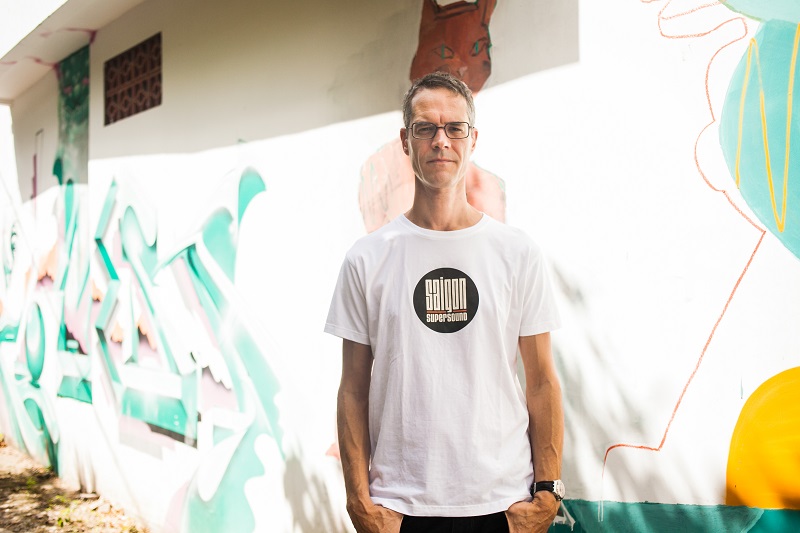 The Vietnamese music both played was popular throughout the ‘50s and ‘60s. Nhac vang is both a contemporary and artistic cousin of European and US music hip at the time. The records Hagenkoetter played before the show sounded at first blush, like they could have been works by the Beach Boys or a Spanish bolero band, but the Vietnamese singing would have corrected this assumption.

It’s in this music tradition that SSR has worked for the three-years that the band has been active. It’s music that’s lively and uptempo—like the lilting “Sai Gon Dep Lam” with it’s “cha cha” cadence—and plays well in front of crowds. As the band’s instruments’ rested at the close of each song, the musicians were greeted with thundering applause and cheers from inside the packed club.

That kind of praise and glowing reception isn’t always there at shows. Speaking to Oi by phone, guitarist Indy Laville and bassist Gabriel Kaouros said Saigon Soul Revival’s classic sound has fallen flat in other places. “We played at Acoustic Bar (in Saigon)… they just sit there and they won’t react,” Kaouros said. “The kind of vibe isn’t there like when we went to Arcan.” Keyboardist Nam Ky Tran; drummer Nguyen Huong Bao Hieu; and singer Nguyen Thu Hang, who performs as “Minh,” perform with Kaouros and Laville as the band’s current lineup.

Generally, the band’s audiences tend to be foreigners for whom the music is new and exciting. The musicians said their toughest shows have been with majority Vietnamese crowds, especially those with young people. “ …the main reason they’re not interested is because it’s old, it’s not cool,” Kaouros said. The music was popular around the end of a divided Vietnam with the country’s southern, more Western friendly audiences. But the musicians disputed the idea that SSR’s body of work is exciting some kind of politically oriented reaction.

“In general, (young Vietnamese) are not political,” Kaouros said. Citing the popularity of EDM, Alan Walker “and shi* like that,” Kaouros said these listeners”are not generally interested in “alternative, noncommercial stuff.”

“I don’t know if it’s as simple as that,” Laville interjected. “I still feel like it’s about marketing,” he said citing the band’s tendency to court attention from foreign audiences over Vietnamese. Laville, a musician with Vietnamese and French heritage raised in Saigon, said SSR’s music and the artistic tradition they worked from was a point of pride for Vietnamese audience members he saw at their shows.

“I feel like the Vietnamese that do come to our shows, they definitely feel some sort of pride at knowing that this is Vietnamese music,” he said.

After the country was reunited, the place that give rise to nhac vang fell out of fashion due to its politically sensitive context, and much of the music was outright banned. Collectors who wanted to listen to the music were united through personal networks through which they could meet other music enthusiasts who wanted to enjoy the music but were all too aware of its associated risks.

This volatility effectively orphaned it. The listenership went dark and many of the labels that released the music were dismantled. When Hagenkoetter decided to turn his own work as a nhac vang collector in a formal music collection called Saigon Supersound, his search for rights holders and copyright bearers largely turned up dead ends. Similarly, Laville said he’d never heard the music before meeting Kaouros in spite of being raised in Vietnam. Kaouros, a US-born Cypriot with Puerto Rican and Cuban heritage, came in contact with the music through friends when moved to Saigon in January 2014. A friend of his, Daniel Thomas who was then a resident DJ at The Observatory, told him “check this sh*t out,” Kaouros remembered. He gave him a copy of Saigon Rock
& Soul: Vietnamese Classic Tracks 1968-1974, another important collection of nhac vang music and a forerunner of Hagenkoetter’s Saigon Supersound series.

Kaouros and Laville met through a jam session with other musicians that would go on to form the Saigon Sound Revival band’s first lineup. “We thought, ‘sh*t, nobody else is playing this kind of music. Why don’t we do a cover band, a revival band?’” Kaouros said. The band had formalized and identified their particular artistic mission before meeting Hagenkoetter, the collector who has joined the band as an artistic consultant and producer working with them as they prepare to release their first record this fall.

When the band formed in 2016, Hagenkoetter was at that point four years in to what started as a leisure interest in Vietnam’s pre-war music that started when he heard Song Cho Nhau, a crashing and audacious tune laden with funk and swagger, in 2012. “That was like, really, wow, f*ck,” Hagenkoetter said. The idea that followed: “I thought ‘Is there more of this?’”

The song was offered to listeners in the first installment of Hagenkoetter’s nhac vang collection, Saigon Supersound Vol. 1. The band played in January to commemorate the release of Hagenkoetter’s “Saigon Supersound Vol.2” collection. Hagenkoetter first came in to the music as just a fan, but he said the music has evolved and grown to be a way to talk about the heritage of his and his Vietnamese wife’s children. Hagenkoetter’s work as a collector has led him to hunt the music down in a range of venues including antique markets in Saigon where necessary, which he avoids due to the generally poor state of the physical recordings. Much of his work has been conducted on the internet where blogs and YouTube channels keep the nhac vang music alive.

The search has led him to meet actual music collectors who vet Hagenkoetter in informal conversations over tea on living room floors before showing him their record collections. If the collector has a song that Hagenkoetter hasn’t heard before, something Hagenkoetter said that rarely happens at this state of his work, or has a recording in better quality that what he personally has, the collector has to initiate the sometimes difficult process of getting the collector to release the physical copy to him temporarily so he can can digitally archive it. Asked how many old Saigon songs he’s heard as a nhac vang archivist, Hagenkoetter reflexively answered “1,000 at least.” “I’ve been asked that question three times before,” he added. For Saigon Supersound Vol. 2, Hagenkoetter said he narrowed the final selection down from a pool of 300 possible songs for this installment.

The band’s work has won the attention of the British Council, which is considering the group for funding. Kaouros said Saigon Sound Revival has taken on a renewed importance in the current music landscape, which is searching for more vintage sounds and is wandering away from well-trodden songs and bands. Eastern music is meeting a demand for something new, and SSR is the only active, high profile band performing the nhac vang music.

“We appear to be the only people representing southeast Asian sounds,” Kaouros said. “If we f*ck this up, we’re idiots,” he added with a laugh. The band intends to go on to record an album for release this year, and tour the music within and outside of Vietnam.