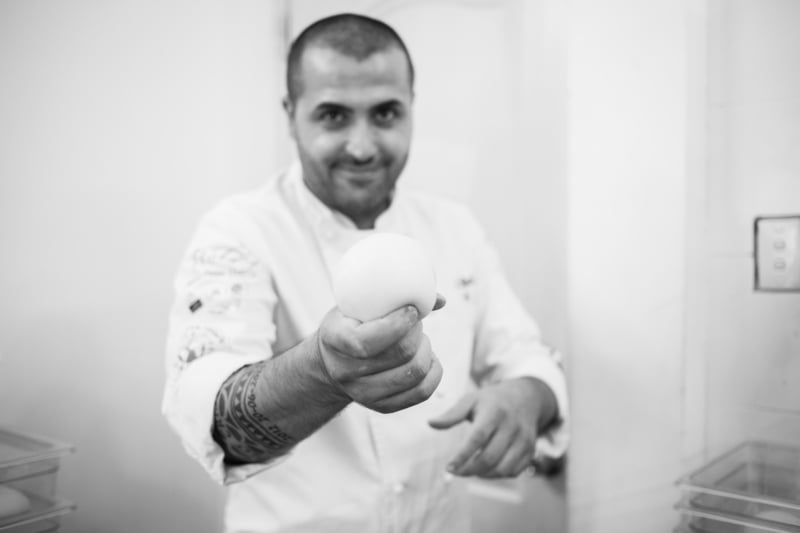 Meet Manuel Reale, winner of the World Championship Pizza in Parma 2017 and passionate spokesman for dough

Before Pizza Reale Chef and owner Manuel Reale fires his pizzas, the dough must be awoken from its slumber. But gently. “Pizza dough is alive,” Reale said matter of factly. The note is characteristic of Reale’s broader views that food is not inert. Precooked dough needs to rest after mixing so it can be “born again.” He refers to the yeast at the “mother of the pizza dough.”

Sometimes, top performers sometimes get weird. Decorated Olympic swimmer Michael Phelps famously disclosed that his record-setting swims were the result of a “videotape,” a visualization of the future winning performances. Reale is also a decorated performer in his field garnering top honors in the Campionato Mondiale Della (World Pizza Championship), a global contest that’s regarded as a standard bearer for the craft. Miss Italy attends crowning the winner. It’s a whole thing. Reale has twice won top honors representing the Southeast Asia region and in 2018 won the top prize among all competitors throughout the world.

There is an attention and care that Reale puts into his pizza making that is not obsessive, but more calculated. It’s a tailored, low-touch process that starts with literally limiting the number of times the precooked dough—a living thing that can be made to feel relaxed or anxious and tight—is touched by Reale and the cooks who work under him. 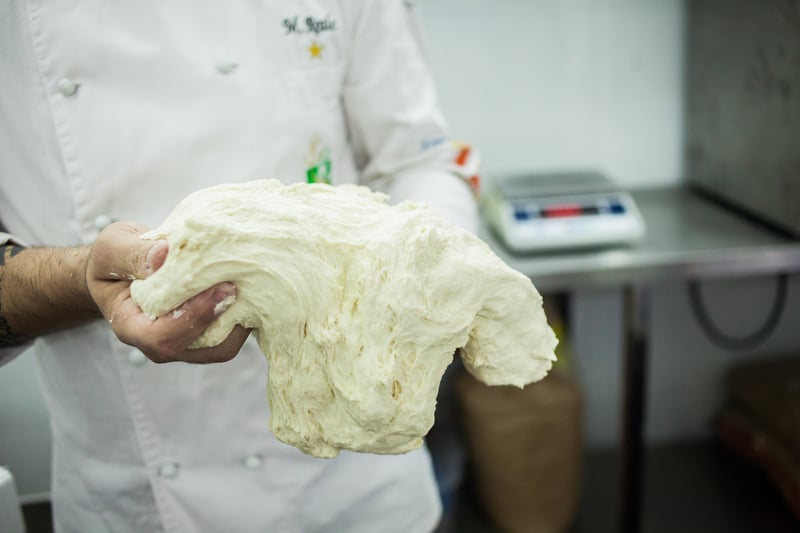 “If you touch too much, it will be stressed,” he observed simply. Reale’s seriousness in word and craft belies his otherwise light manner. In conversation, he speaks fluidly and marks pauses externalized ellipses like, “How can I explain?” He tells stories in which he poses and answers his own questions. “I really like the McDonald’s style,” he said not pausing to register this as an odd statement. Instead, he continued: “Because if you know the story—do you know the story?”

This question is a narrative device only. Reale offered it only to preamble his going ahead and telling the story. By Reale’s telling, he sees the food giant’s success as a kitchen design success. Minimal kitchen staff movements and a neat kitchen are game changers, he argues. “This is an ‘every step-by-step’”-process, Reale said. 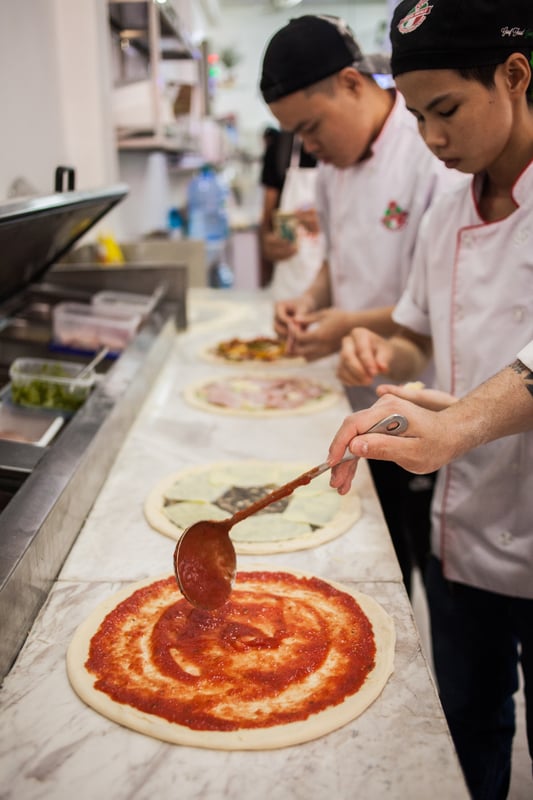 “Now, people want just open pizza … already touch pizza,” he said pausing visibly tsk-tsk-ing the restaurateur in haste. One of Reale’s first and formative experiences as a beginning pizza chef was apprenticing with a local pizzaiolo who insisted Reale start as a busser.

“I start from zero, eh?” That’s both a well-trod cliché as well as a earnings disclosure: he worked for two month under this apprenticeship for no salary. “10 o’clock: okay, I finish my work. I take off the apron,” Reale said pausing like he’s settling i to a comfortable joke. “I remember it like now.” 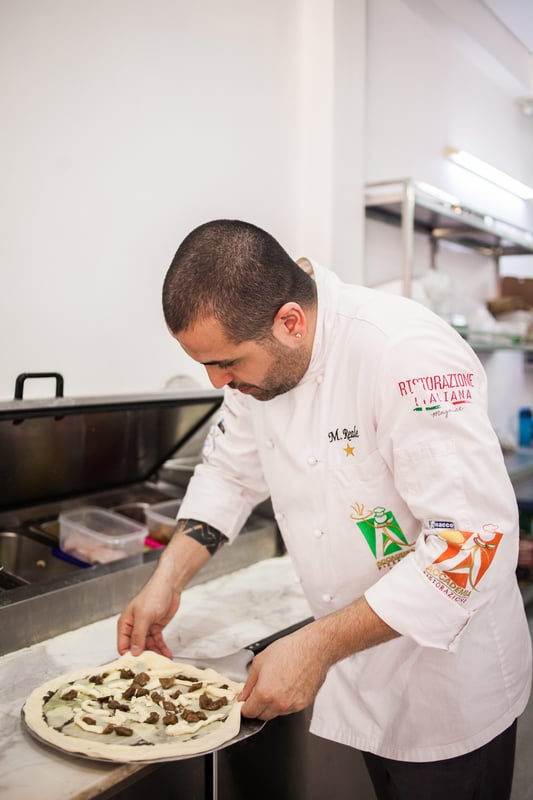 “Take out the apron and I say, ‘okay, my work … finished.’ Oh, which one? You have all pizza kitchen to clean,’” he recalled his boss replying. Reale apprenticed under Luciano Passeri, a restaurateur who today oversees a small culinary fiefdom as a partner in commercial interests located in San Diego, Poland and Italy as well.

A teenage Reale may have appreciated the potential power of the figure asking him to detail his stoves in responding to the request with a simple “Ok.”

The remark is offered not so much as a self aggrandizement, but just matter of fact, a small note of appreciation and compassion an older Reale appears to have to his younger self. An even younger one saw the pizza maker that remains a touchstone for him today. 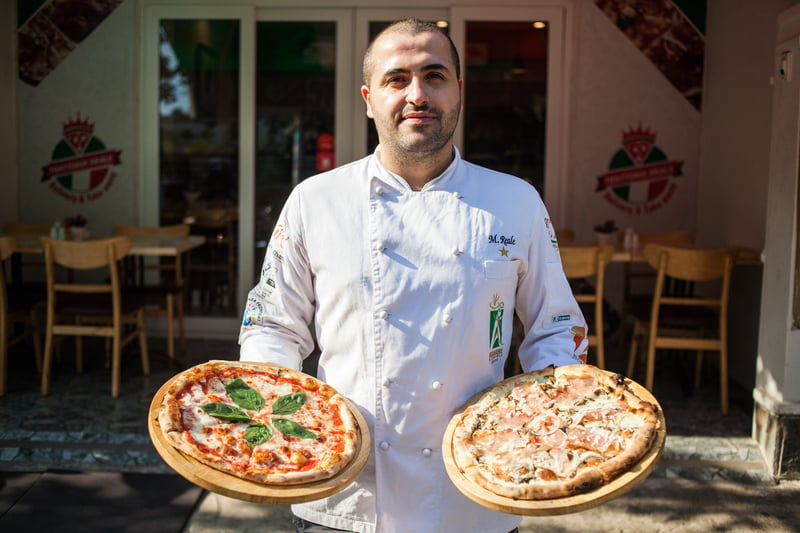 “You know how make me enjoy it [sic]? Because I go to the restaurant with my family the first time. I have a look at that guy,” the first pizza chef a younger Reale had taken real notice of perhaps in his life. “So, I have a look, you know? Have a look, have a look.” The last lines are delivered musically in two ways, first going up the tonal scale and then going down the scale.

Reale remembers what he described as a guy who would “play with pizza” before putting on the topping and cooking it to serve. In later tellings of this story, maybe he’ll have a more literary sounding ending for it. Today, though, it’s just an unrehearsed account of a lived experience and ends with just a small note. “Oh,” he said making a sound like one might make after finding lost keys in their home. “When I see that… I started to too like it.”

But why Vietnam? The answer is straightforward: “about that, it’s not my—” Reale paused interjecting the Italian word before the English“—decision.” Reale was originally recruited to work in neighboring pizzeria Pendolasco. “Just because they call me for work. I come here for work. But after that, I can’t say,” Reale said resting for a beat. “Because never in my life I think ‘Vietnam,’ eh? Vietnam,” he said perhaps enjoying the strangeness of the word. 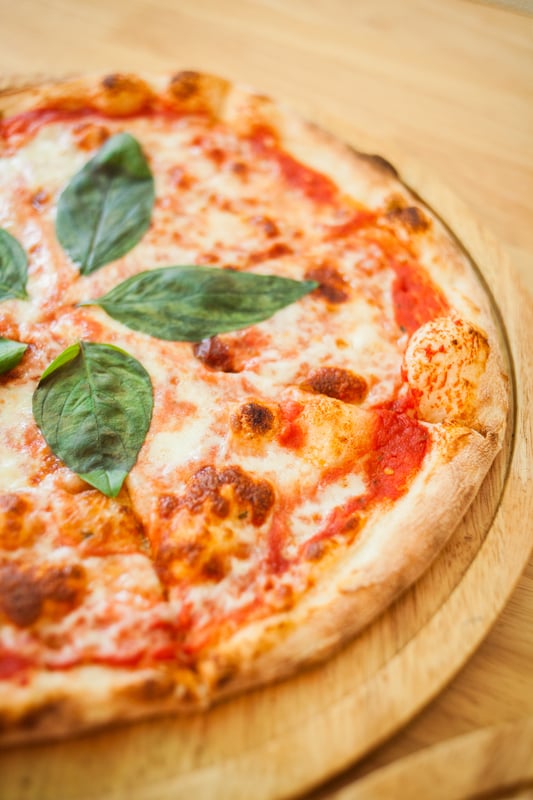 “Pizza Reale” is a nice double entendre capturing both the owner’s name and “royal” in Italian. The four-month-old restaurant itself, however, is not an homage to luxury or entitlement as it is an aesthetic statement on the power of simplicity: simple, tiled flooring above which normal-seeming wood chairs sit at the ready in front of neatly done table placings.

The dining room floor awaits appearances from its star players, maybe the prize-winning Pizza Mondiale, a dish which like a first love defies explanation and in retelling only frustratingly gives hints of thing that was once a real, felt presence: the cool of the artichoke cream and over correctly portioned of savory complements, the nut-meatiness of the porcini mushroom and just a little bit of bacon. 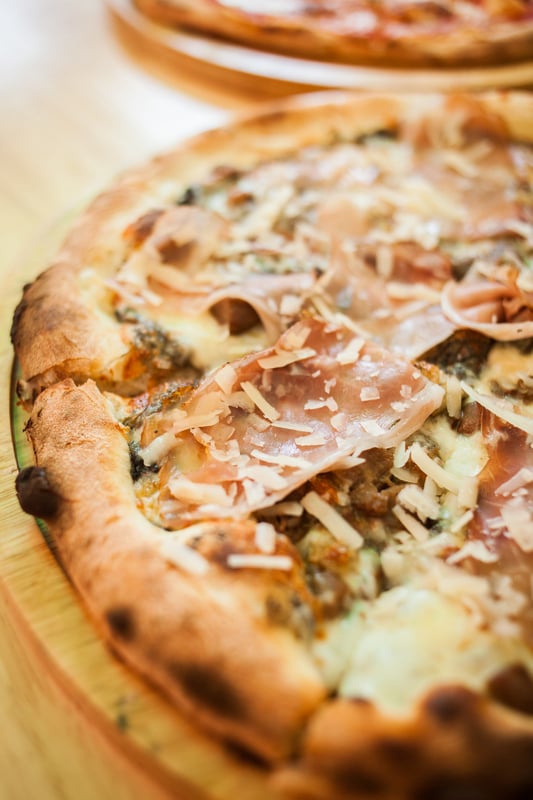 Pizza Reale co-founder Carmine Magnotta, an engineer-turned culinary professional, said profit ought to be a lower order need in his industry. “Profit is okay, but you need to make an effort for people to come here. You need to give something back,” he said offering his remarks standing while in between personal guest visits. Because our time is scarce—there are, after all, guests already seated waiting service— Magnotta offers just a economical sketch of what might that something be: “Personality, experience. It’s not just about food, it’s about us as well,” he offers before excusing himself.