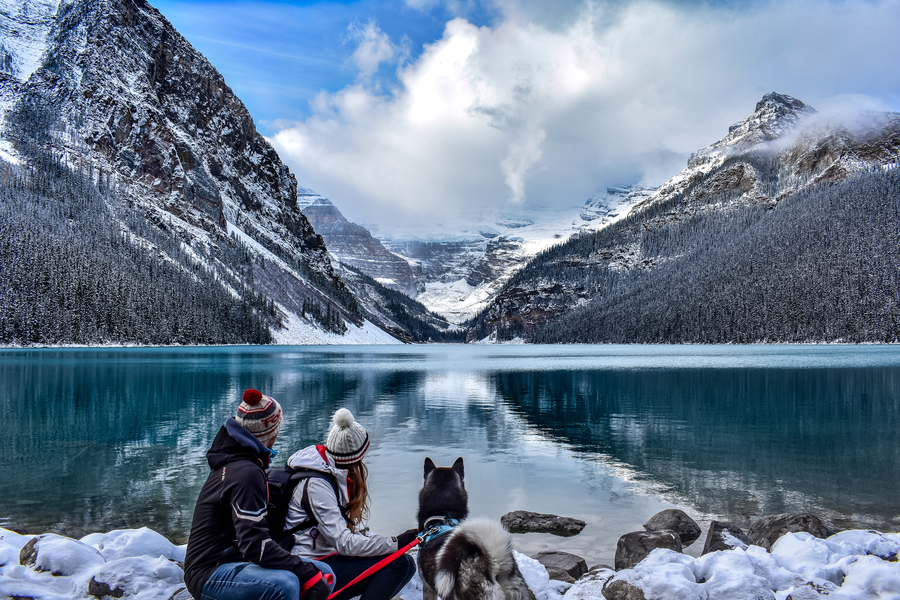 In conversation with Mieke Hoekman about pet-ventures.com, a website about traveling internationally with your pet, because man’s best friend is also man’s best travel and adventure companion

When and why did you move to Vietnam?

About eight years ago I was traveling with a friend through Asia. We bought some Honda Wins and drove from southern to northern Vietnam and during that road trip I fell absolutely in love with the country, its people, scenery and food. At the end of the road trip, I decided I wanted to stay in Vietnam for a longer period to really get to know the beautiful Vietnamese culture.

Did you have dogs before Tron?

Our family always had dogs while I was growing up, from a beagle to a Bouvier to a black lab. They were my companions, bringing comfort when needed and putting a smile on my face by acting silly.  There was no question to me that one day I would get my own dog.

Tell us how and where you met Tron and why you decided to adopt him?

There is never an exact right moment to get a dog, so while living in Vietnam I decided to just take the plunge (against the advice of many people). I researched what type of breeds would be a great fit for me and my lifestyle and a husky seemed to be the right choice. To my surprise, I found a litter of pups in Hanoi. I went to have a look at the litter and this little black and white fluff ball caught my eye. He was looking at me with his bright blue eyes, just sitting in the corner of the puppy pen. I was sold. 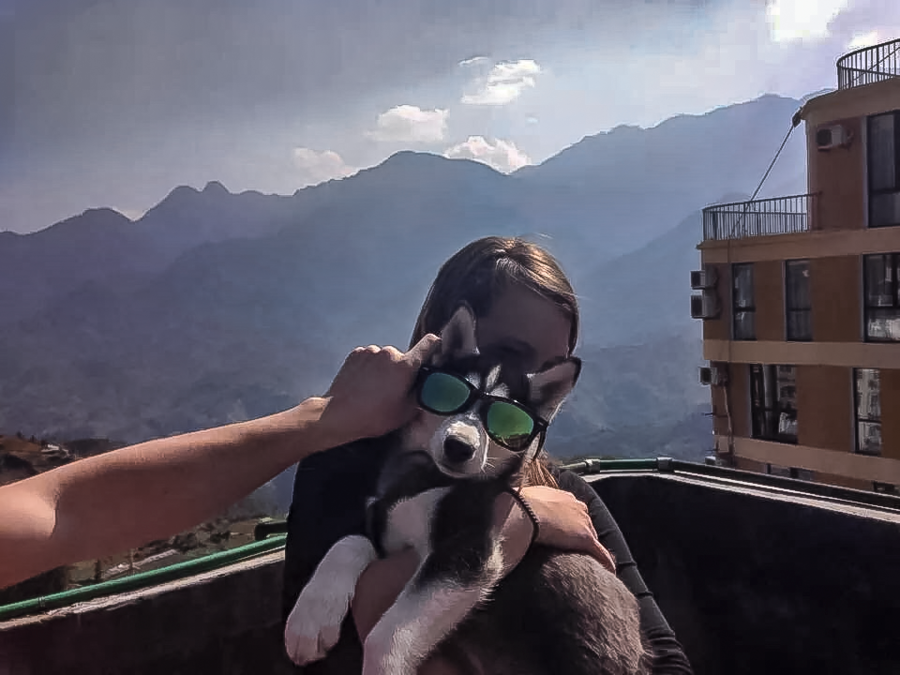 Why the name Tron?

My partner and I had just watched the movie TRON: Legacy and we were looking for an original name. All the neon blue colors in the movie reminded us of Tron’s eyes, so we decided to name him Tron. So far we have never met another with the same name.

What were the challenges of raising a husky breed in Vietnam?

The first challenge is the climate. Although a husky’s double coat is capable of withstanding extremes (hot and cold), they still need plenty of shade and water to deal with the heat and humidity. We decided to move to Sapa to have cooler weather for Tron. This brought a whole new set of challenges with it because a husky is a rare sight in an area like Sapa. We were not able to let him out of our sight for a minute because the threat of him being stolen was very real. To our disgust, we were informed that a price was put on his head to take him from us to be used for dogfighting. They never succeeded! 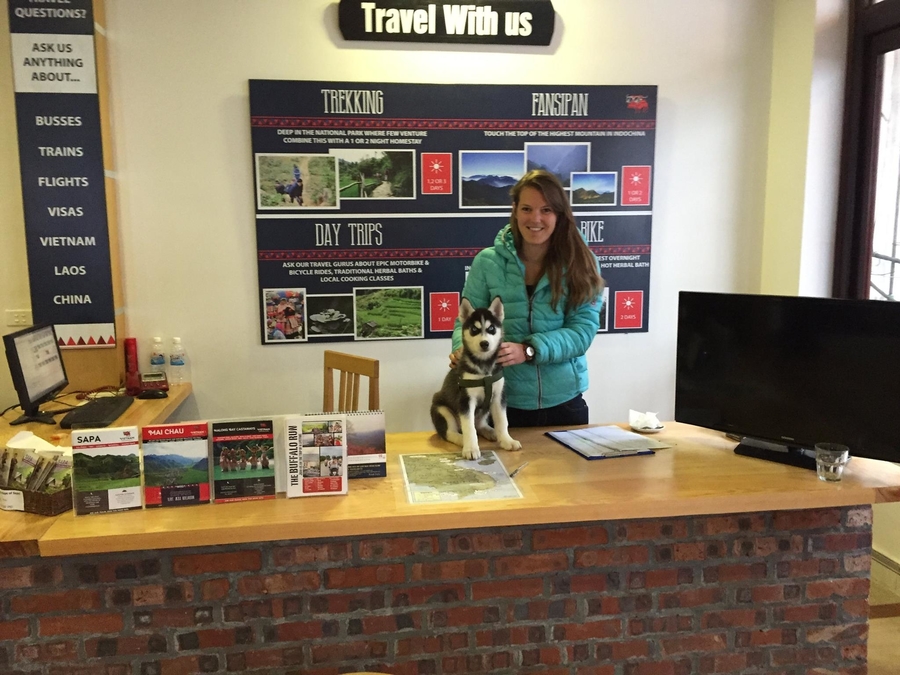 When traveling around with Tron, what was the easiest form of transportation: planes, trains, automobiles, etc.?

Cars are definitely the easiest way to get around with a dog, especially because you have the freedom to stop. Traveling with a dog can be unpredictable and you do not want to push the dog too far. Having the option to stop and go for a walk to break up the journey definitely helps with keeping things fun and interesting. The most interesting mode of transportation we have had was the night train from Hanoi to Lao Cai. Officially, dogs are not allowed in the passenger cabins, but when Tron was still very little, I was able to sneak him in under a coat. It was a real challenge keeping a puppy occupied and quiet for eight hours. We did it a couple of times until I was not able to hide Tron under a coat anymore because he got too big. 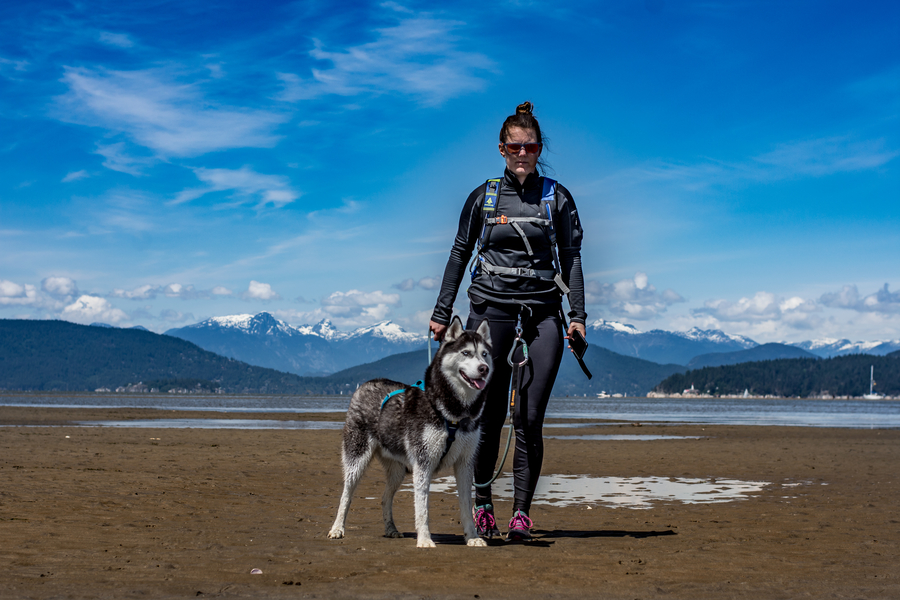 What country (or city) was the most dog friendly during your travels?

There is not one particular city or country that stands out to be the most dog friendly to us. All cities and countries have different pros and cons. What we love about Vancouver in Canada, for example, is that there are a lot of spaces/parks where dogs can run around free and be themselves. Lots of patios are dog-friendly and stores are welcoming. Unfortunately, you are not allowed to take dogs on public transport unless you are able to carry them in a bag, something that will never happen with Tron. 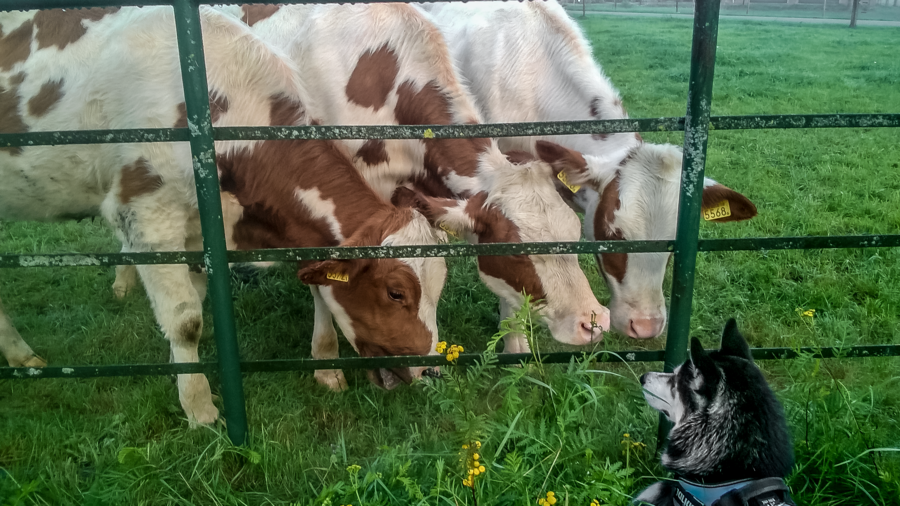 The Netherlands is a bit the opposite. You can easily travel with your dog on public transport, making it easier to get around without a car. However, space where dogs can run around off-leash is limited.

And where was it hardest to enter with Tron and how did you make it work?

We did not travel to countries with extreme quarantine regulations like Iceland or Australia. We do not want to put Tron through unnecessary stress, just for the sake of traveling. The hardest part so far has been taking Tron from Asia to Europe. As the prevalence of rabies is a lot higher in Asia, Europe has strict import regulations. There is a protocol for rabies vaccinations according to a time schedule, a microchip to be able to identify the pet and followed by a rabies antibody titer blood test. After the blood test was taken (and send to a lab in Europe to be analyzed), we had to wait 90 days before we would be able to enter Europe with Tron. We also needed an import document signed by an official veterinarian in Vietnam to prove that Tron was healthy and did not carry any other diseases. All and all a lot of work, but not impossible! 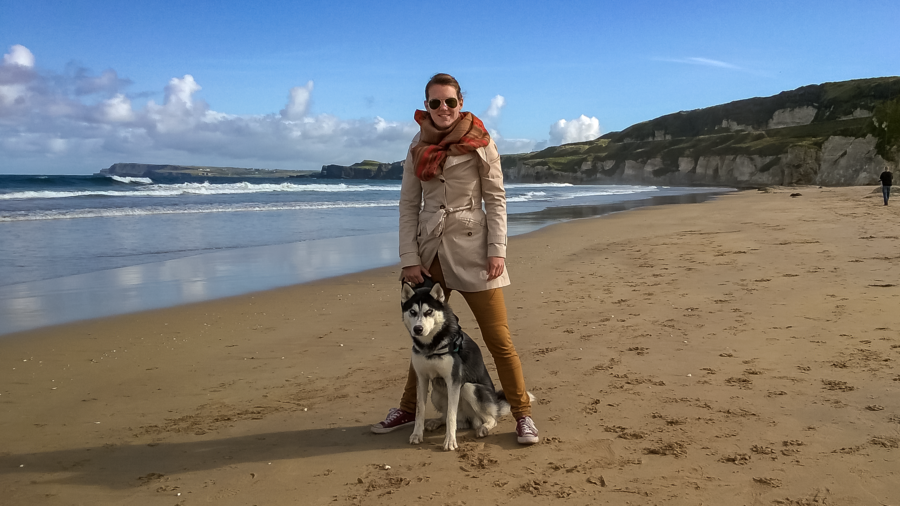 Pet ownership, especially the idea of dogs as family members, is a relatively new concept in Vietnam, what prejudices did you encounter being a dog-owner while you lived in Vietnam, and especially with a big dog like Tron?

Walking with Tron on the streets in Vietnam evoked a whole range of reactions in people passing by or watching us. Some people would just look at us in sheer terror, somewhat understandable because they might have never seen a husky before. Other reactions ranged from being curious, to offering money to buy Tron for dog fighting. In Sapa, sometimes little kids would run up to us and try to kick Tron under the watchful eye of their parents laughing at them across the street. Many times, we have heard the words “thit cho” (dog meat) used in jokes directed at us. Although these events could be slightly upsetting, they were far and few from the instances where we were met with a smile and clumsy interest. Unless the dog meat markets and dog fighting rings stop to exist and dogs are seen as proper family members, there will always be a fear of dogs getting stolen, unfortunately. 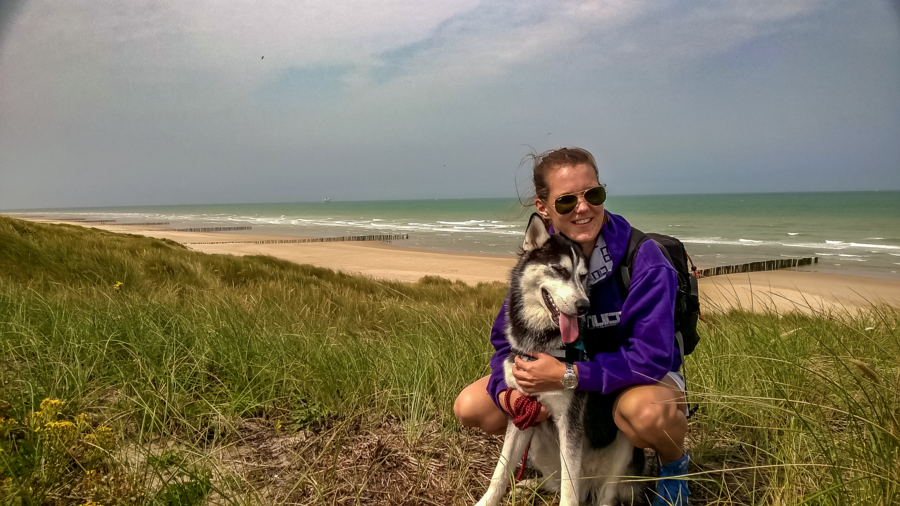 We want to make traveling with pets more accessible for everyone. It can be confusing and daunting to get the right information on import regulations or transport policies. We are aiming to collect all useful information and make it available in one place. Hopefully, we will be able to inspire people to get out more with their pets by sharing our story and that of others, but also show them that they do not have to give up their family member if they move countries. 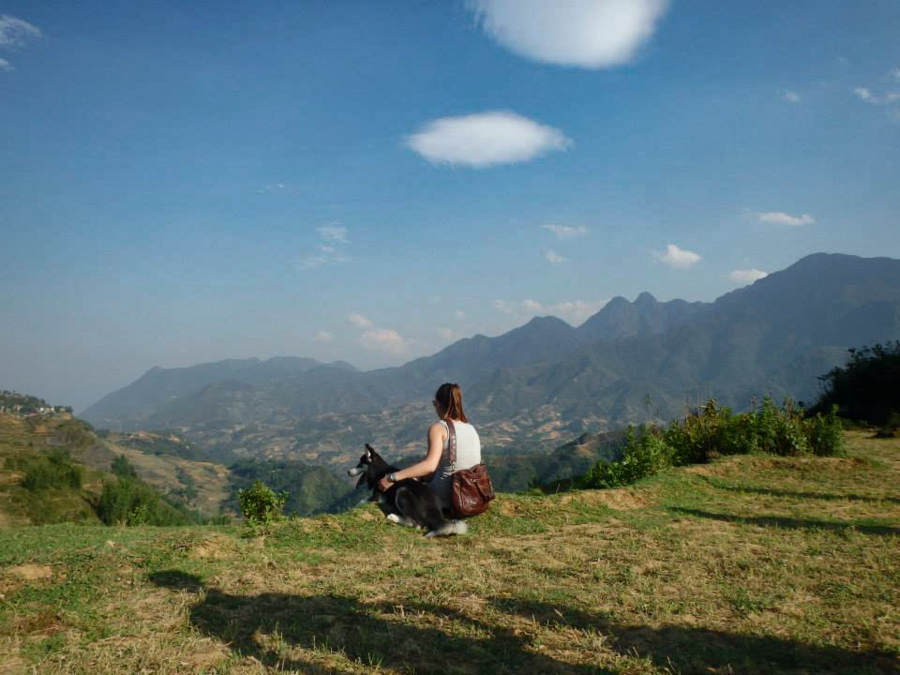 What cities have you travelled to with Tron?

We have taken the night train from Hanoi to Lao Cai a couple of times. We have flown through Moscow, Russia, driven through Germany, Belgium (but never stayed over night). Twice we did a road trip from the Netherlands to Northern Ireland and back taking ferries and camping along the way. As we have spent the past 2.5 years in Canada, most of our trips have been here. To Vancouver Island, the Rockies about four times and many small camping trips. 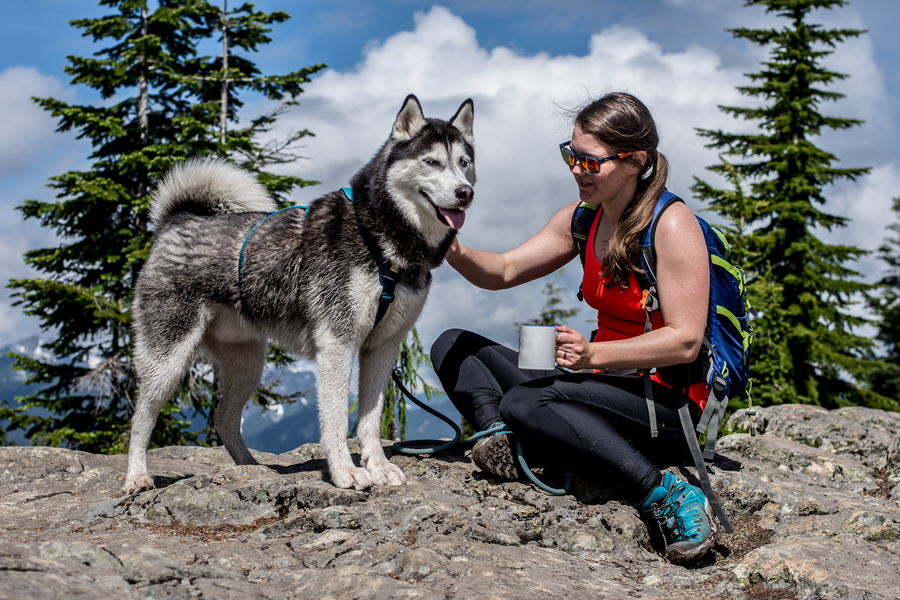 Is Canada the final adventure destination for you and Tron?

Canada is definitely a place where both Tron and I feel at home. It fits our active lifestyle and Tron can run around freely without worry. He has experienced deep snow and cold winters here, which he absolutely loves. However, there is still so much more to explore together. The one thing that is on the top of my list is to take Tron and drive in a car from Amsterdam to Beijing with him. I am particularly interested in the cultures of the countries where East meets West and take Tron on hiking/camping trips in rugged landscapes where we have to be dependent on each other, strengthening our bond. 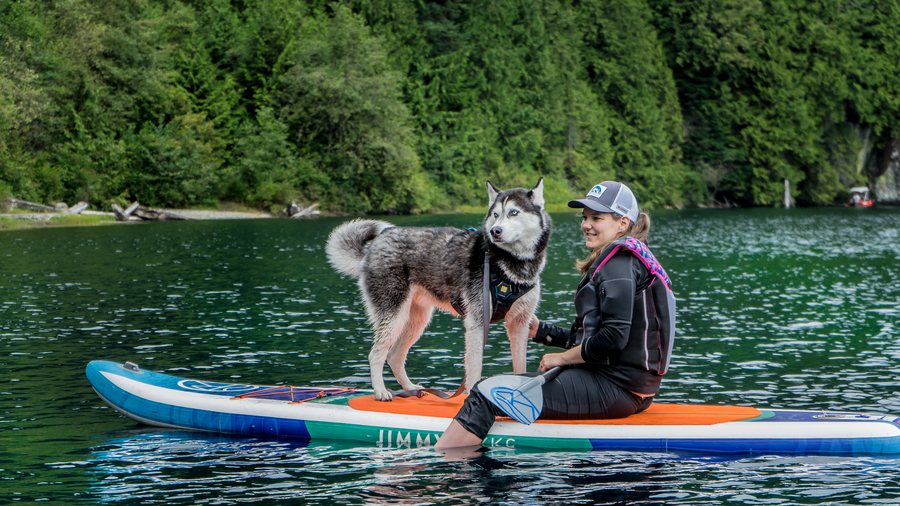