A look inside one of the world’s largest agriculture companies

It’s almost half the world’s pepper. It’s a sizable chunk of the world’s coffee and almonds, their cashews and dehydrated onions. But if you’re not an industry insider, the name Olam International (www.olamgroup.com) isn’t likely to ring a bell. “We’re probably one of the biggest companies you’ve never heard of,” said Nikki Barber, Vice President of Olam International’s public relations. 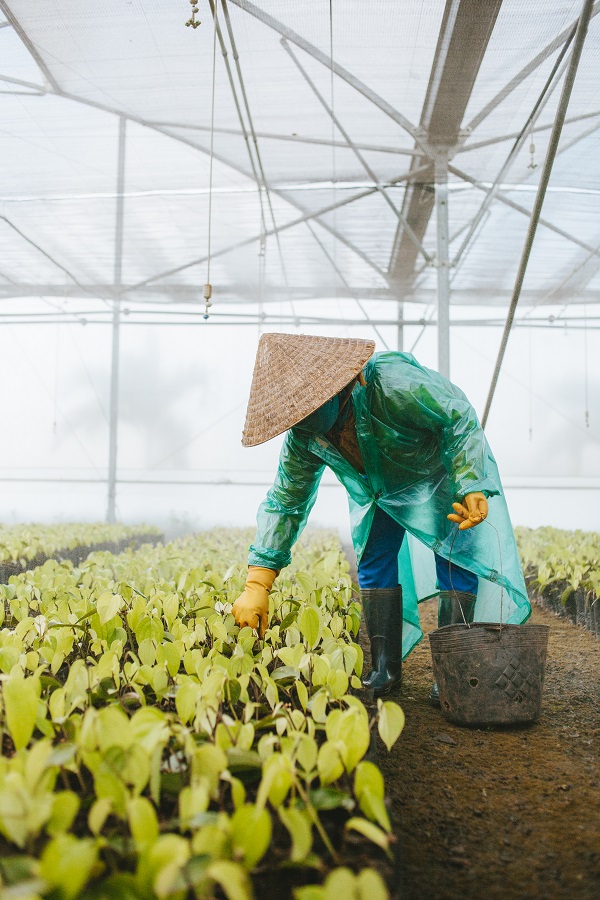 Barber is based in London, though the company is headquartered in Singapore. Originally an agriculture commodity grower, the company has grown internationally now with operations in over 70 countries and a portfolio of 47 agriculture supplies. The company has also expanded their refinement capacity and merged their production capacities with robust refinement and processing capacities. Not only can they grow the raw green coffee, they can roast and grind it too. Not only can they grow the pepper, they can provide different grind varieties. She gave her remarks in a snug office the middle of the company’s pepper operation in rural Pleiku.

Vietnam provides about 40 percent of the world’s pepper, so the 640-hectare pepper growing operation Barber is speaking from isn’t totally representative of the agricultural giant’s might. There are 2.4 million hectares of farmland and forestry concessions under its direct management globally. The area pepper farms feeding into the company’s pepper stock—some 34,000 Vietnamese farmers grow agricultural products that are part of Olam operations—far outside what the company is growing directly on its farm. But in important ways, the relatively small pepper operation in the middle of south-central Vietnam is wholly representative of the company. 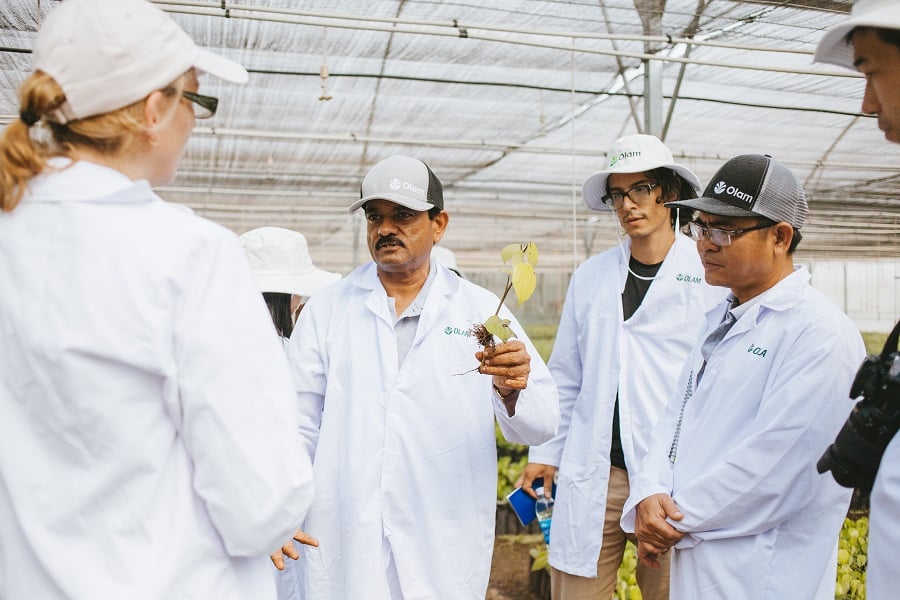 “Pepper is a sensitive plant,” Ravindranath Balakrishnan said walking into the company’s pepper growing operation, a covered area where a new kind of pepper grows under a lightdimming insect net under the care of the handful of full time staff whose job it is to tend to the plants with the help of networked monitoring machines inside the growing house that measure key variables like moisture levels and stem size. The shading net is draped over poles; pepper plants snake up them as they grow like veins on a human body. Pepper plants normally appear as giant, treelike organisms towering over their farmers, but these are actually mature pepper plants that have grown fully over their supporting pole. 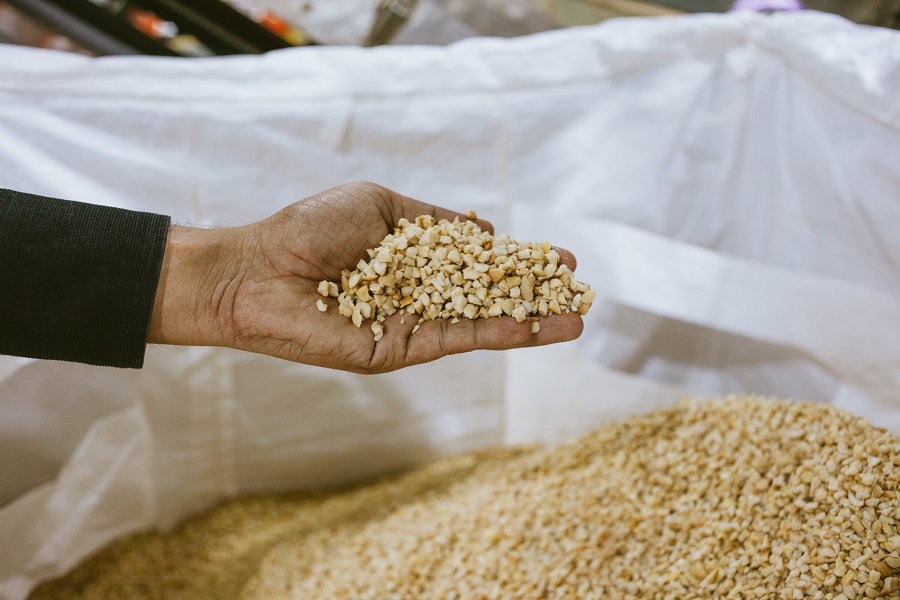 Pepper plants in Pleiku are usually grown out in the open too with varying degrees of care and with farming methods that may vary wildly from producer to producer. One of the farmers who works with Olam now said, before the partnership, he was planting the pepper stalks just as his father had shown him: by burying a pepper stalk several feet into the ground. Typically, a large percentage of pepper that’s planted does not take to the soil. 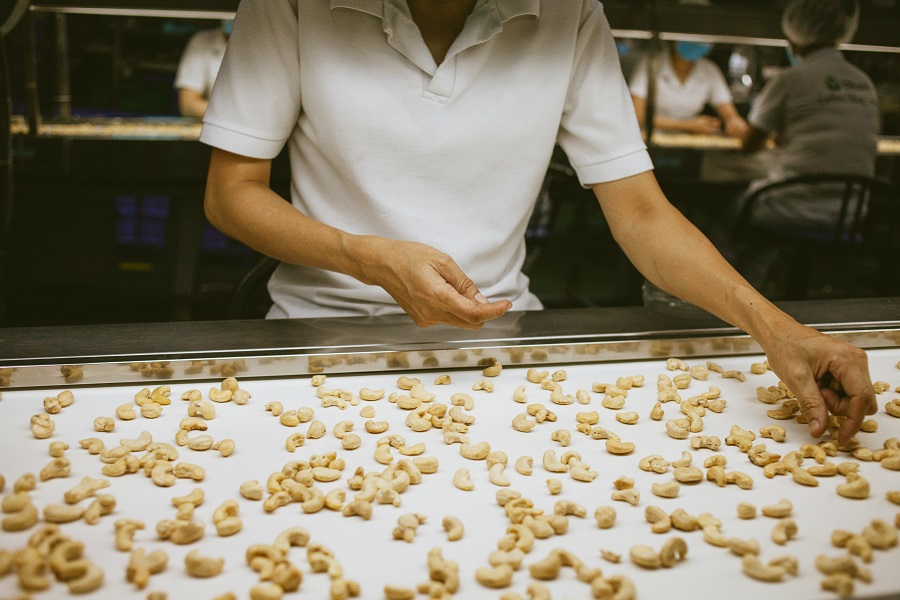 At the Olam pepper operation, however, almost every one of the plants that are trimmed from the nursery and are planted outside—each of which meets Global G.A.P. and Rainforest Alliance certification—survive and yield the farmer additional harvest. At a time when pepper prices have sunk compared to their historical average, Balakrishnan explained that farmers were seeking ways to add value to their crops. Olam’s values for sustainability-centered production align with the need. In a few years, the company plants to have the nursery source a higher quality pepper plant commercially for local farmers. The company’s volume of production means that this could potentially raise the quality of pepper production worldwide.

For an international company of Olam’s scale, the changes they make inevitably affect the global supply of food. Changes to how the company decides to manage their almond operation in Australia—some 45 percent of the country’s total output—will inevitably change the almond the world as a whole buys and consumes. 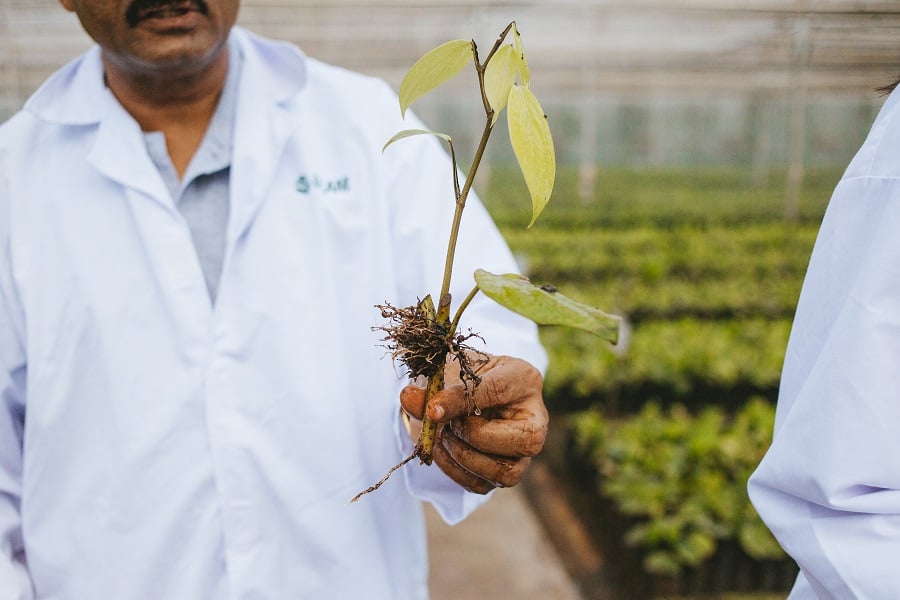 But the volumes only tell part of the story. In California, for example, the state which plays a greatly outsized role in the world’s almond supply providing some 80 percent of the nuts globally, Olam’s crops there are bordered by wildflowers. The flowers are there to support the local bee population, which pollinates the crop. General Mills, a company that buys the almonds grown there, highlighted the company’s bee-friendly practices in press communications.

A company of this size it seems has to think strategically in terms of global volumes, of world consumption and consumption trends by country. While consumers may not know Olam, but they know their products’ buyers: General Mills, Nestle and Mars. Perhaps because their industry is agriculture and not something like manufacturing where the inputs and outputs are more static, Olam operates in a manner that’s attentive to the world in which they operate. The areas where their farmers are clustered in rural Vietnam are studied for livability and, where appropriate and necessary, the company takes direct involvement to enhance the quality of life for local residents. In Pleiku, the company built a school for area children. Schools are both a necessary resources for a healthy, educated local workforce as well as a hedge against child labor. A neighboring village close to the pepper operation Barber spoke at lacked street lights until Olam built a network of nighttime road lighting for the community free of charge.

The Singapore-based company has an operation that spans the world. Much of the Olam cashew supply processed in Vietnam is grown in Africa and exported out to countries with big demand like India. Yet the company is also small enough to help create a small farmers’ cooperative, like the one in Bu Dang. These 294 Vietnamese farmers are among the first to grow cashew crops with a coveted Fair Trade certification. Like pepper, cashew prices have also depressed. The Fair Trade certification is a way to add more value to their crop and create higher revenues for their yield. Olam trains the farmers to achieve certification, but allows them to sell to their preferred buyer. 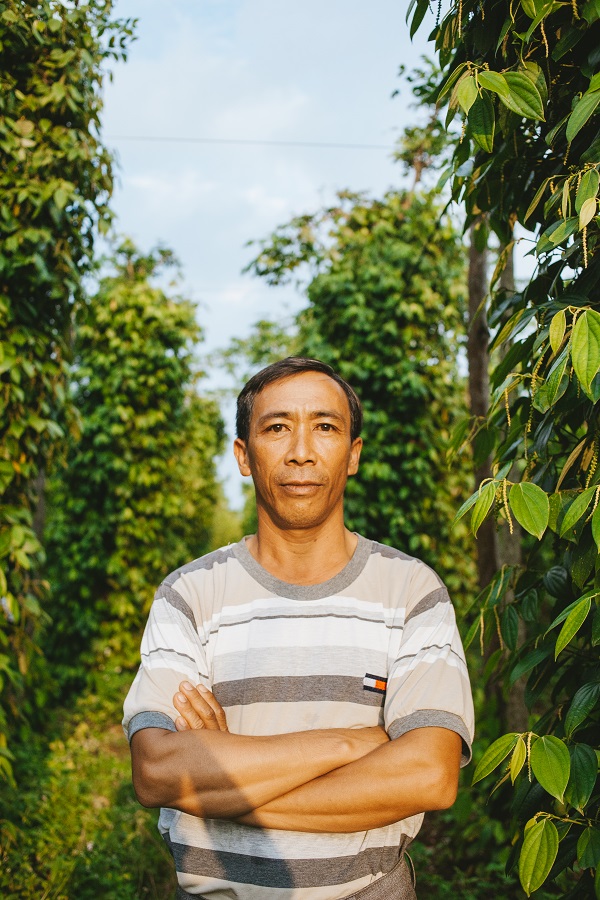 Among them is 55-year-old farmer Nguyen Xuan Hop. He was one of a group of farmers who met with Barber and press in September, including Oi Vietnam. Nguyen said the new farming methods were a little different—namely, that he had to control his fertilizer use in a more careful manner to accord with Fair Trade standards—but that the co-op was ultimately a better deal for him and the farmers around him. Previously, he said buyer would negotiate with each farmer individually allowing the buyer to effectively set the price of their crop. Through the co-op, farmers are able to bargain collectively and there’s more transparency in the process leading to generally higher revenue for the farmers who join. In many cases, Olam International is offering assistance with land connected directly to homes that’s been in the hands of farmers for generations. These are generally not the industrial farm operations of the US, but sometimes seemingly just very productive backyards or green spaces that can mirror nature reserves. Before the cashews Olam International sells can be harvested—typically, right after the new year—they first appear as flowers on large, towering trees, some of them decades old. If you’re reading this around the end of November, know that the cashew flower is blooming, a sign of something good to come.