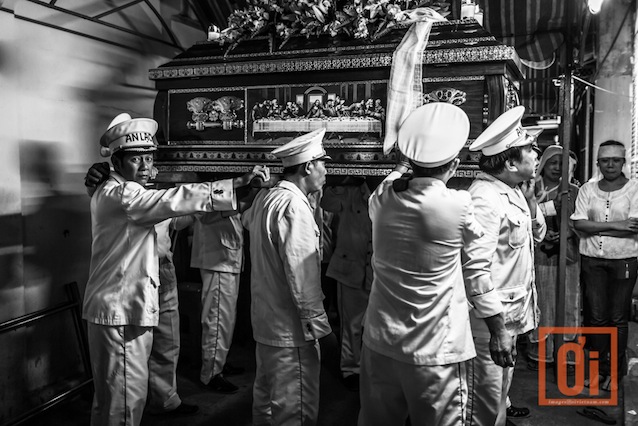 Granted special access to attend a Vietnamese funeral, Oi was able to gain insight into the traditions and customs that have long mystified expatriates.

The funeral rite of Dominico Le Van Thuong, father of four, grandfather of 10, and great grandfather of many more, started with the first rite on Tuesday, March 10, 2013, at precisely 10am. The family laid the dead man out on a cot in a room with open windows and the door open onto the street. A crowd had gathered beyond that door, mostly neighbors.

One of his sons hung the funeral flags bearing Catholic crosses on the second floor balcony to signify the start of the funeral. The whole house was decked out with funeral drapes all bearing crosses, pictures of Jesus, and funeral verses. The candles were supplied by the church. If this were a Buddhist funeral, the draperies, altar, and parts of the process would be changed accordingly.

Although the heart and framework of the Vietnamese funeral dates back thousands of years, religion has always been a vital part of the funeral rite. A Vietnamese funeral is a description of the deceased person, and his or her faith is simply one among many details. 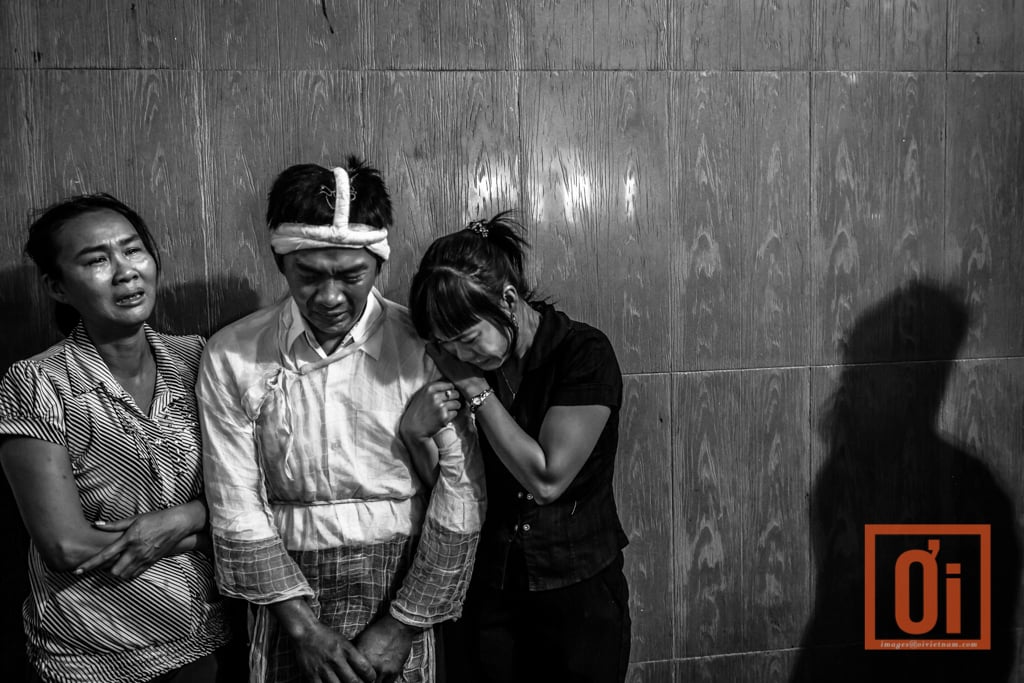 Five minutes after 10, the priest came in and everyone started singing – both the crowd of neighbors and the family. The songs were Catholic, and because the dead man had lived a long and fulfilling life, dying at the ripe old age of 91, they sang of love, of a life well spent, and the promise of heaven after death. In a Buddhist funeral, the singing would be replaced by sutra chanting.

The priest led the singing. In between songs, he read out prayers for the dead man. “Dominico Le Van Thuong,” he stressed, using Thuong’s saint name. (If Thuong were a Buddhist, it would have been a postdeath name chosen merely hours before his death, and it would have been spoken by a Buddhist monk.) “We pray he is received by our merciful Father in heaven. As our father accompanies us in life, so shall He accompany us in death. It is our belief that life does not truly end, and that death has no true power over us.” He anointed Thuong, just before leaving for midday mass.

The first rite, as is always the case, lasted little over an hour. As the crowd cleared out, the hired pallbearers entered. The coffin had already been brought into the room, so the pallbearers wrapped the corpse in linen shrouds, put Thuong inside the coffin, and filled the gaps with dried leaves. A plastic cover was placed on top in place of the lid, and a white cloth draped over it. One of his sons couldn’t make it to the funeral. The white cloth was meant to take his place. The coffin was left half-open. The lid would be closed two days later in the last rite ceremony, just before the mass.

With that, the first rite ended. Thuong was now officially dead in the eyes of the community.

The Beginning of the Last

In the nights leading up to the last rite, family members took turns guarding the coffin. What followed in the next two days was a period of farewell. From morning to night, the family, dressed in white funeral garb, received guests who came to share their condolences and say their goodbyes to Thuong. Their clothes were rented from the undertaking company, and there were no less than five deviations from the truly traditional clothes, but that was fine, as far as Huong, the eldest daughter of the dead man, was concerned.

“We live in a crowded city,” she said as she adjusted her great granddaughter’s headwear. The headband was supposed to be yellow, denoting the girl’s relationship to the deceased person, but from the start of the funeral the family, all 30 of them, had received 30 identical white headbands. The religion or origin of Thuong was not an issue here. The dress code was pure Vietnamese. In the 18th century, a decree from the king made white the mandatory color for all Vietnamese, regardless of status.

“We need not be fussy about the small things. Traditions too need to change to fit the modern world,” Huong added. “If we followed tradition to the letter, we’d bankrupt ourselves, and cause all the working children to lose their jobs. My father would understand. He’s a good father. He knows it’s a tough time his children live in.”

In a city such as Saigon, many people share her opinion. The old Vietnamese code of funeral garbs is notoriously complex. The rite of funeral itself has close to 50 variations depending on the religion, social status, wealth, and origin of the deceased person. Over time, the rite has been simplified to fit the pace of urban life.

The undertaking service cost VND20 million for the pall bearers, the ashwood coffin, the parade, and the rented clothes. 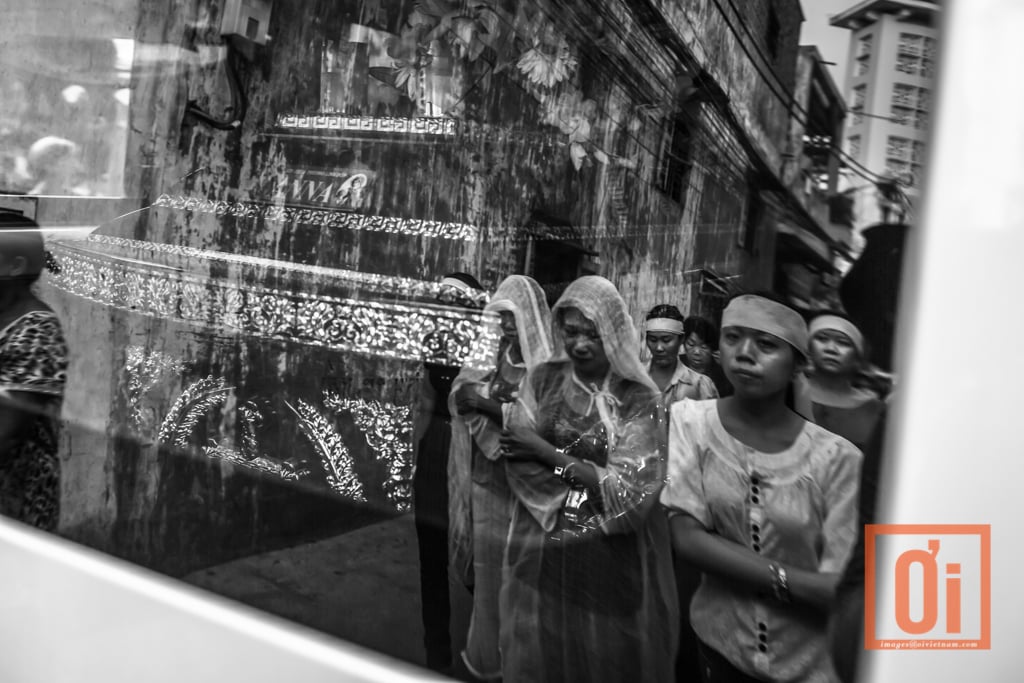 Huong, additionally, hired a speaker to entertain the guests for the two days. It turned out to be money well-spent. Over the two days, friends and longtime acquaintances of Thuong came in droves to say farewell. Some had traveled thousands of miles to stand before his coffin, bow, and sprinkle holy water on him with a white daisy. Some touched the coffin in hope that the deceased man would take their bad luck with him to the afterlife. They sang songs, had drinks, and talked of their time with Thuong. The songs grew livelier as the night wore on.

There was a lot of laughter, and little crying. Dominico Thuong had had a fulfilling life. He went as he slept, surrounded by his family. To the Vietnamese, there is no better death than that. Subsequently, there was little cause for mourning, and the atmosphere of those two days reflected this.

As the Saints Go Marching On

On Thursday morning, the last rite began. Catholic funerals start much earlier than the Buddhist variant, beginning at 5am. In the twilight of dawn, the procession started with the bang of drums, clarinets, cymbals, and trumpets. The funeral band played up a ruckus as they marched, the noise tolerated by sleepy neighbors.

The Vietnamese have a saying that the gesture for the dead is the greatest one, for it is the last. And it is this saying that is behind the loud music and flashy parade dress – a big gesture from the family in their last walk with a loved one.

On the way out, past the door, they smashed a clay pot on the ground, a signal for Thuong’s soul not to linger in this world and to start his journey to the afterlife.

The coffin was borne by 10 pallbearers. The eldest son led the procession. The family and funeral guests trailed behind. In the old days, Huong and the rest of the family would have had to walk barefoot all the way to the church and to the cremation house. Thankfully, modern tradition is far more lenient.

At six, the last mass began. The mass was an hour long, during which Huong’s 10-year-old granddaughter slept with her head on her grandmother’s lap.

It was a short ride from the church to the cremation house. “Burial is too expensive,” Huong explained. “A lot in the local church graveyard costs two ounces of gold. There’s also a maintenance fee. We are not a rich family. Saigon is simply too crowded. There’s not even enough land for the living, let alone the dead.” 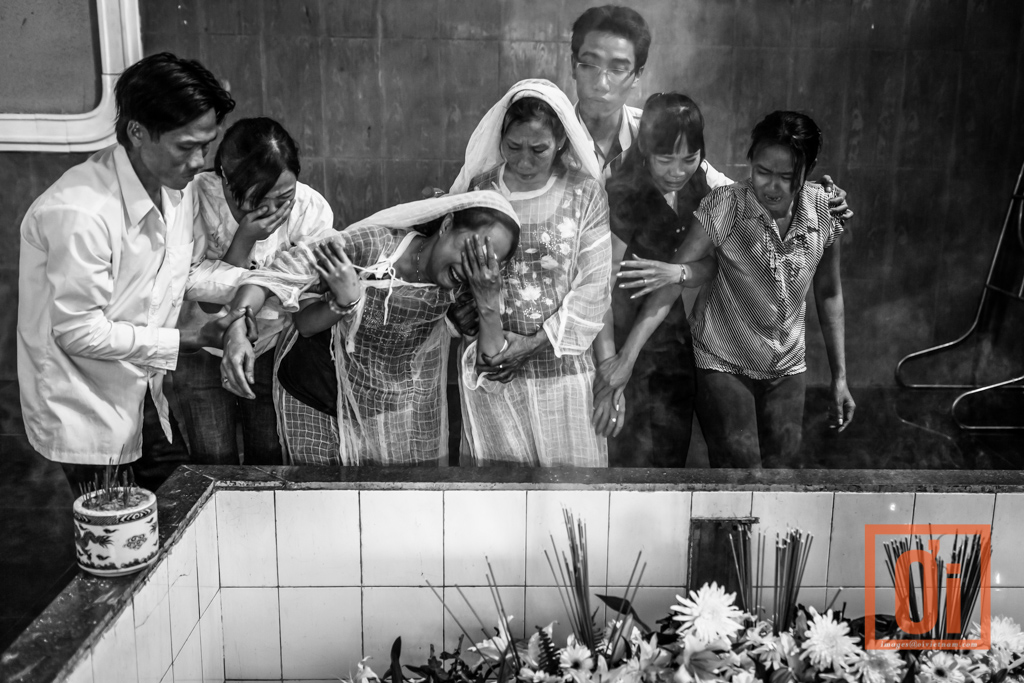 By then, the funeral crowd had dwindled down to family and closest friends. The rest had left at the church gate. They tore out flowers from the funeral wreaths and threw them into the cremation chamber along with the coffin. A last farewell gift.

“It is done,” she said as the coffin flamed. “Our duty now is to carry on living.”

1 thought on “The Mourning After”