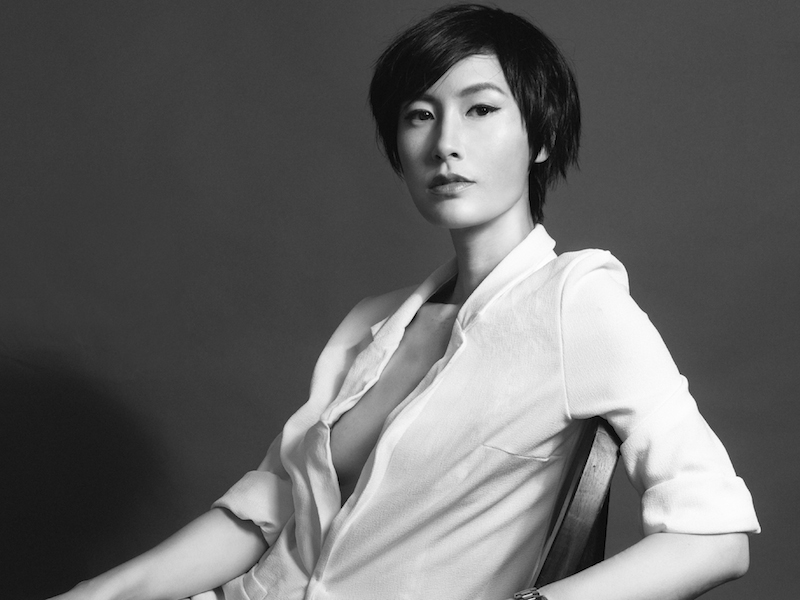 Sometimes there’s a lot more to a new haircut than meets the eye.

With a strong, angled jawline and a rock-steady bearing that has been captivating her fan base for over a decade, Kathy Uyen is one handsome actress. That’s not to deny her femininity, however – she may be touched by a man’s beauty, but she has always managed to wear it like a woman. Her elegant, gently androgynous look has been turning heads since her earliest appearances, helping her to win leading roles that have increasingly diverged from passive, feminine stereotypes. In a sense, though, her recent decision to embrace the strong contours of her own face with a fresh cut is a liberating move that’s long overdue.

It may come as a surprise, then, to discover that actress Kathy Uyen has spent most of her career trying to hide her signature look behind a long, girly hair-do. Ironically, while consciously gravitating towards fiercely independent parts (and despite her own driven, tomboyish personality), she’s been too afraid to abandon her classic hairstyle – the kind that only tends to score bookings from directors seeking a submissive look for exoticized Asian female roles. All along, the thing that Kathy has feared most was being told that she looks like a boy. 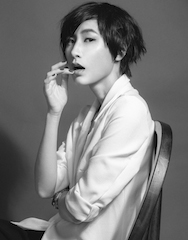 “I’ve always been shy about it,” she admits, cupping her chin and flashing a quick profile. “I do get comments. When I photograph, it’s always ‘chin down, turn this way, make it less square.’ I got self-conscious. Even in the pictures I took myself, I would try not to expose too much jaw. At the end of the day, I go through the same psychological curve as any girl does. Everyone goes through those similar arcs. For people in the public eye, it’s just amplified.”

Frankly, Kathy seems to have taken a long time to see something that’s been obvious to everyone else since the beginning. If there’s anything consistent about her acting work as a whole, it’s that she has repeatedly performed empowering female roles. Most of her audience first laid eyes on her back in 2008, when she had a bit part on the popular American TV series How I Met Your Mother – in which her character has the singular pleasure of reeling off a couple of lines and then slapping actor Neil Patrick Harris in the face. In her most recent film Triple Trouble (Bộ ba rắc rối), she joins an all-girl lead cast in a movie which pleasingly flips the playing field – it’s the male characters who are objectified and sexualized, while the ladies primarily focus on having a good time.

“Perhaps the audience saw it, yes,” she concedes, “but while I was playing these characters who were strong, it was almost as if I was projecting my need for what I wanted to become in them. When you seek to do something so much, it’s because you feel you’re lacking that thing yourself, and you want to embody that. Then, role by role, you’re able to do it more naturally and it becomes you.”

“I wasn’t even good at acting when I started,” she adds. “That’s why I wanted to be an actress, because I sucked at it and I was so scared of being in front of other people.”

Growing up in San Jose, Kathy’s move to Vietnam came out of a growing involvement in American Vietnamese media and the opportunities that grew out of that. Her first big break – a major role in Victor Vu’s Passport to Love that scored her a coveted Golden Kite award for Best Supporting Actress – cemented the obvious advantages of pursuing her career here. The transition, however, wasn’t easy. 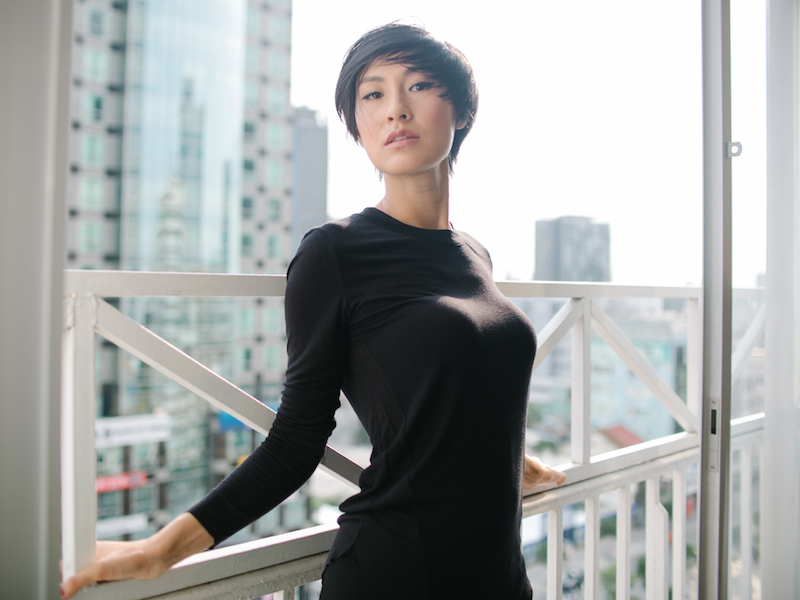 “I was trying to assimilate with what being a celebrity in Vietnam is,” Kathy explains. “I came here in the first two years because I wasn’t one of them, I was still an outsider. I got by because I landed roles that were for Vietnamese-Americans. But after that, I realized that there weren’t going to be that many of them. I wasn’t getting any offers because they were looking for local girls, not girls with a slight American accent.”

Faced with limited acting prospects, Kathy decided on a risky move – there were no scripts out there casting for her type, so she decided to write her own. It was an unlikely gamble, but the resulting feature film How to Fight in Six Inch Heels (Âm mưu giày gót nhọn) topped the local box office for three weeks, firmly securing her a place among local screenwriters and producers. In the process, Kathy literally transformed herself into the kind of self-confident, inwardly balanced woman she’s been playing all along.

“I tried to get over my flaws by just putting them in the character and working them out,” she says, commenting on the similarities between her role in Six Inch Heels and her own personality. “My friendships with women here changed my definition of what it means to be a strong woman. In America, being a strong woman means you’re very aggressive, opinionated, and you speak your mind. A strong woman in Vietnam is different. She can hold back that emotion, and save it for a time when it’s more effective. They do hold back, but it doesn’t mean that they’re weak. It’s a different strength.”

In many ways, Six Inch Heels is a sisterhood film, an ode to the differing strengths embodied by different women – and a reaction, perhaps, to movies in which female character progression is only defined in relation to male lead roles. In the context of Vietnamese cinema, that’s a bold play, and the film was welcomed abroad on festival circuits as a fresh look at the modern face of this country, dubbed “a Vietnam War in couture.”

Kathy’s been back to promote the film, but an immediate return home to pursue her Hollywood career is unlikely for now. A shot at lead roles in America would pit her against the likes of Maggie Q, Lucy Liu, and Grace Park – whereas here, opportunities to write for the big screen continue to present themselves.

“I am developing projects now,” she says, “developing scripts that I want to write.

Do I want to go back to Hollywood one day?Yes, I do. But I want to be able to do co-productions. In the future, besides doing projects in Vietnam, I want to write great projects and collaborate with producers in Asia and collaborate with actors in Hollywood. Maybe they’ll be American actors who happen to be shooting in Vietnam, or we’ll take Vietnamese actors back to America. I want to keep growing as an artist, without the end focus being Hollywood. I want the focus to be the work, as an artist.”

Reaching a satisfying point in her career has also brought opportunities to inspire others. Just last month, Kathy participated in Toto 2015 (a filmmaking class for young adults) in which she mentored an enthusiastic young team working on a short movie in which she took a cameo part. She was also a guest judge on the local reality TV show Tôi là diễn viên (I am an Actor). This experience, as well as that of coaching and supporting fellow actors on set, has inspired her to open an acting class for newcomers to the entertainment industry here.

“It’s a big change,” she admits. “I do feel a new energy. I feel like something new is coming. My life has for the longest time been all about acting. I was so passionate about it – call it obsessed, call it hypnotized, call it drawn to acting. But I didn’t realize how much I really enjoyed sharing my acting. Before, I was very hesitant to teach it, because I was afraid, what if I stop doing it? But actually teaching it really inspires me to keep going. All these kids, I got such good feedback, and it made me think – wow, I feel really useful.”

While she expects to begin her classes within the next couple of months, she’s already writing her next screenplay. 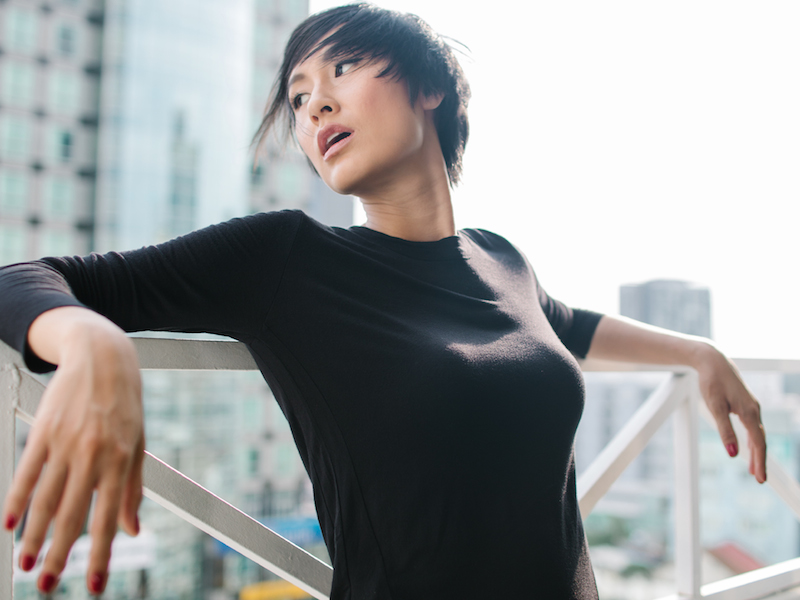 “I didn’t like writing before,” she laughs, “but then, I didn’t realize the power of it until the last movie. Then I realized that as an actor, no matter how good you are, you can only be as good as your words. So if you want to take it to the next level, you’ve got to know more about the characters you play. Now I know that power, I’ve learned to embrace it. To get better at it. So that’s why now I feel really balanced.”

If her new look is any indication, it’s a given that whatever we see from Kathy Uyen’s next film, it’s going to be the women who remain on top.

“For the scripts I’m developing, the stories, I want to break stereotypes of women,” she declares. “I want to introduce crazier, outside- the-box characters. Vietnamese women have a lot of personality. They’re very sassy, very bold. If we have to watch these weak women all the time on screen, how’s it going to inspire us to be strong? I feel if I’m going to be a writer, I’m going to write some strong women. Because why not? Wait for someone else to write it? I know women more than I know men, because I’m not a man. You’ve got to write from what you know, right?”.